If you’re yet to experience the delights of Freeview HD and Blu-ray, then this terrific combi from Panasonic gets you both in one fell swoop. The DMR-PWT500EB throws twin Freeview HD (DVB-T2) tuners, a 320GB hard disk and a 3D-capable Blu-ray spinner into a single box.

In terms of design the DMR-PWT500 is similar to Panasonic’s other Blu-ray players and recorders. It uses a conservative yet modern black finish, with a partially transparent flap covering the entire front panel. A large LED display shines through the flap providing running time and channel number information. Behind the flap is Panasonic’s usual pair of media ports – SD card and USB – which offers two ways of playing digital media files or copying them to the hard-disk.

The rear panel offers a decent selection of sockets, although not as good as it could have been. The HDMI v1.4 output is obviously crucial, while the optical digital audio and analogue stereo outputs might come in handy. Yet the lack of a second HDMI output, as found on Panasonic’s DMP-BDT310, is a shame and there’s no component output for those who need it.

However, there is an Ethernet port and a second USB port specifically designated for Panasonic’s TY-CC10W communication camera, which is required if you want to use Skype video calling – one of this unit’s most alluring features.

Like the majority of Panasonic’s Blu-ray players, the DMR-PWT500 is crammed with features. Firstly, it’s 3D-ready and additionally equipped with 2D to 3D conversion. Not only can you convert 2D Blu-rays and DVDs to pseudo-3D but also Freeview programmes, which is a bonus with no Freeview 3D channels on the horizon. But if and when they do come, the DMR-PWT500 is ready to record them.

It’s also equipped with built-in Wi-Fi (802.11a/b/g/n) – no faffing about with USB dongles here – and as a DLNA-certified player it can be used as a server or client with compatible devices on your home network. You can access content stored on Windows 7 PCs and other devices, or watch recordings from this recorder on other networked Panasonic units. 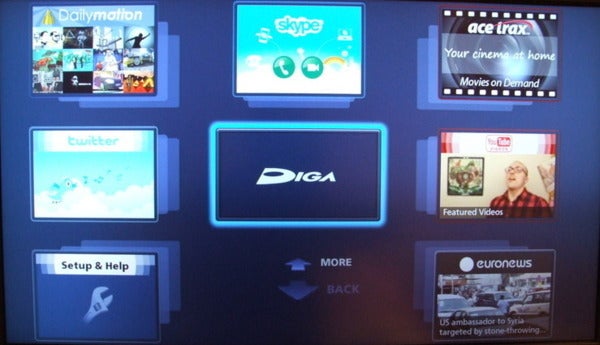 This is backed up by Panasonic’s Viera Cast, its entertaining yet comparatively limited internet portal. The apps range from the good (YouTube, Acetrax) to the downright irrelevant (Tagesschau, tn.cz) with the moderately useful Twitter and Picasa in-between. What’s most pleasing, however, is the presentation, a slick layout laced with thumbnails, bold colours and smooth animations when travelling from page to page. Definitely time for an upgrade though.

Skype is perhaps the most impressive use of the DMR-PWT500’s web connection. Through a simple-yet-attractive interface, you can make video calls to other Skype users in HD using a communication camera plugged in the rear USB port. This peripheral is quite an expense, but if you’re a regular Skype user and want to make video calls from the comfort of your living room, it’s probably worth the investment.

Elsewhere the hard-disk can be used as a media library, storing and playing AVCHD, JPEG, MPO (3D photos) and MP3, although a greater range of formats is supported from USB sticks, adding DivX HD and MKV to the list. From SD cards, the unit will play AVCHD, MPEG-2 (SD video), JPEG and MPO.

The deck makes things simple for you from the very first boot-up. There’s an Easy Setting wizard, which tunes channels straight away then displays the relevant network settings, allowing you to find available access points and enter your encryption key using the onscreen virtual keyboard. It’s quick and easy, the way it should be.

From then on, it’s mostly plain sailing. The tried and trusted Panasonic remote, with its large spongy keys and foolproof labelling, makes every menu a breeze to navigate, without having to look down before every button press. 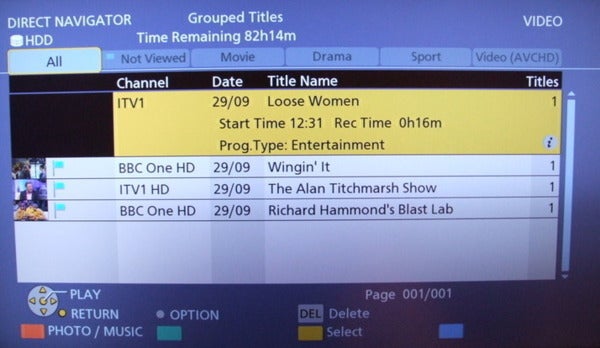 Bright, friendly onscreen menus are the order of the day, with logical lists, large text and colour-coded shortcuts. Recordings are stored in the Direct Navigator, each one listed with a comprehensive list of details (including a flag icon for new recordings) and a moving thumbnail. Along the top are tabs that let you filter by genre. A press of the Option key brings up the editing menu where you can delete part of the recording – something not all Freeview PVRs allow you to do – and the cleverly designed virtual edit suite makes it an easy process. 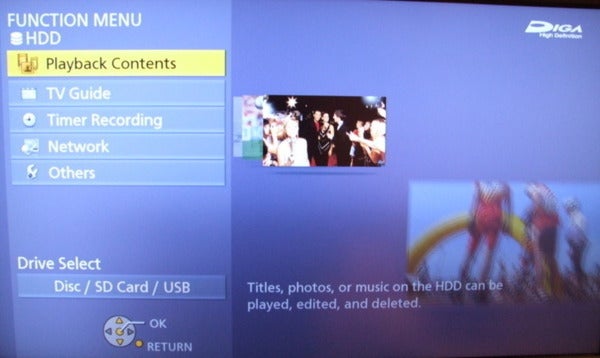 PVR functionality is excellent. You can record one channel while watching another or record two channels simultaneously, switching between the two channels being recorded when you hit the programme change keys. You can pause and rewind live TV, set an entire series to record from the eight-day EPG and allow recording start and stop times to be controlled by the broadcasters, meaning you don’t miss a minute of your favourite shows.

What’s more, easily understandable dialogue boxes pop up when setting recordings, which inform you of clashes, or tell you when an SD programme is also available in HD. These can sometimes feel long-winded – you have to go through two confirmation screens before the timer is set, for example – but on the whole they’re great. 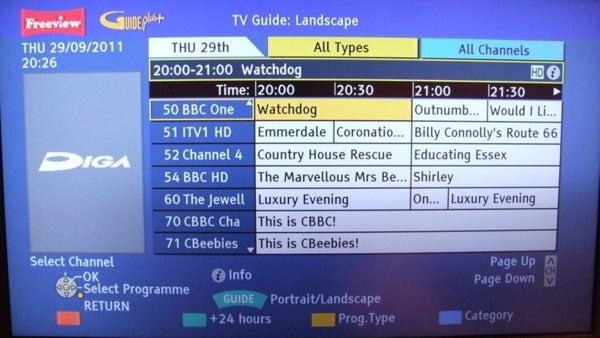 The worst part of the operating system is the EPG. The layout is cluttered, the programme grid is too small and the large grey ‘advert’ block rears its ugly head yet again. There’s no live TV screen either and you have to press a button to see the synopsis. But we like the ‘Also in HD’ line that appears when you select SD programmes that are simulcast in HD, and the single channel portrait view is a lot clearer.

Live TV picture quality is a mixed bag. High-definition channels look stunning, with jaw-droppingly crisp detail and convincing, natural colours. For instance watching the Champions League football on ITV1 HD, the deck coped with fast-moving detail without shimmering or losing clarity, and during half-time studio chats it unfortunately brought revealing clarity to the textures of Adrian Chiles’ face. Planet Dinosaur on BBC One HD also looked great, with the charmingly sub-Jurassic Park CG and surrounding landscapes looking pristine. This high quality is maintained when recorded on the hard disk.

But strangely we’re not that enamoured by the quality of the Panasonic’s standard-def pictures. ITV1 looks noisier than usual – as the Loose Women moan about men in their usual animated way, the hideously garish studio shimmers with mosquito noise. Colours look overcooked too and the image lacks depth. It’s still watchable but not up to the same standards as rival Freeview PVRs.

Still, Blu-ray pictures look stunning. With Panasonic’s PHL Chroma Processor Plus at work once again, colours are smooth and realistic, plus the masterful detail retrieval ensures razor-sharp pictures. We fired up the original Star Wars on Blu-ray and it’s never looked better. From the scum and villainy of Mos Eisley to the gloomy surface of the Death Star, the DMR-PWT500 makes every scene shine. And 3D pictures share this sense of awe and wonder, particularly with Avatar in the tray – we couldn’t find a single fault with the quality of the deck’s stereoscopic picture processing.

The DMR-PWT500 also does a good job with web video, playing YouTube clips with surprising clarity and few delays. We were able to stream DivX, AVCHD, WMV, AVI and MP3 with no glitches, and all content is easy to access thanks to the clear, logical menu system.

Verdict
If you’re in the market for both a Blu-ray player and Freeview PVR, then you won’t go far wrong with the DMR-PWT500. Despite two technologies being fused together in one box, neither side feels compromised by their close proximity.

On the Blu-ray side, its 3D support, DLNA networking, Skype and built-in Wi-Fi form a formidable feature line-up, plus its 2D and 3D picture quality is out of this world. And on the Freeview side, the twin tuners, editing features, comprehensive PVR tricks and superb HD pictures make day-to-day TV timeshifting and viewing a (mostly) pleasing experience.

It’s not perfect though – standard-def pictures are noisier than expected, the EPG needs a rethink and Viera Cast needs upgrading to Viera Connect. At around £400 it’s expensive too, but none of that greatly dims our enthusiasm for this impressive combi product.