The Panasonic DMR-HW220 is one of several new hard-disk recorders in Panasonic’s 2012 range, but unlike some of the step-up models, there’s no Blu-ray recording on board for making copies of hi-def programmes. This is a straight up Freeview HD PVR with a 1TB hard-disk, but it does throw in most of the snazzy features from the company’s Blu-ray players, such as Viera Connect, built-in Wi-Fi and DLNA certification. Great news, but with Samsung’s brilliant BD-E8500 Smart PVR already laying down the gauntlet, Panasonic doesn’t have things all its own way – let’s see what the Japanese brand brings to the table. 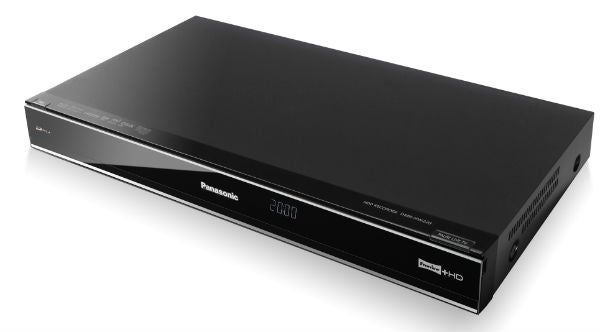 Design
First up, Panasonic has done very little to change the external design this year. That’s not necessarily a bad thing, as the all-black casing with silver trim is tasteful and easy to match with other components. We’re impressed by the aluminium bodywork, which gives build quality a boost, but at 59mm high it’s surprisingly chunky.

Panasonic likes using flaps to hide front panel clutter and here it covers up a USB port, an SD card slot and buttons for changing channels. The lack of Blu-ray drive means there’s a large blank panel on the left, plus there’s a large LED display panel and cluster of lights to indicate a recording is in progress.

Connections
On the back the socket line-up covers all bases. Interestingly there’s a second USB port, which can be used exclusively for Panasonic’s communication camera should you choose to buy one, allowing you to make Skype video calls from the comfort of your sofa. That leaves the front USB port free for media playback from HDDs and flash drives. There’s no need to connect a wireless LAN adapter as the HW220 comes with built-in Wi-Fi (the cheaper DMR-HW120 does require one, however).

You’ll also find an HDMI output for sending pictures to your TV, analogue stereo output, optical digital audio output and an Ethernet port, which provides an alternative (and possibly more reliable) connection to your network.

Panasonic rarely skimps on features and the DMR-HW220 boasts a typically generous selection. On the PVR side, there are two Freeview HD tuners, making it possible to record two hi-def channels simultaneously, and a whopping 1TB hard-disk, which provides 259 hours of recording time in HD or 518 hours of SD programmes. But the really good news is that you can connect an external HDD to the USB port and move data from the built-in HDD to the external one, freeing-up space. Conversely, if 1TB sounds too capacious then the cheaper DMR-HW120 offers a 500GB HDD. 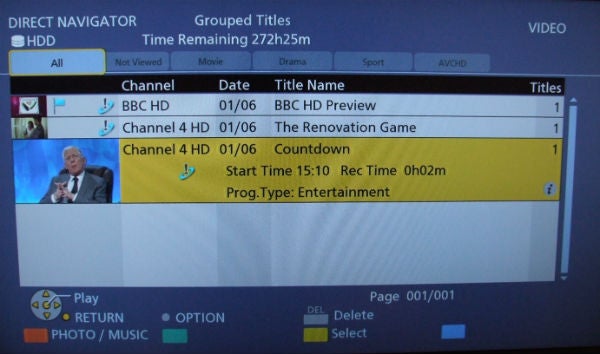 Your recordings can be edited in the Direct Navigator menu, where you can delete part of a recording using a straightforward edit screen that lets you add start and end points. You can also rename and divide recordings, or change the thumbnail.

You also get all the usual PVR tricks that make TV viewing so much easier than it used to be – namely pause/rewind live TV (with a 1.5 hour buffer) and viewing of programmes while they’re still being recorded. But that’s old news – more interesting is the 2D-to-3D conversion, which allows you to bring flat Freeview programmes to life on your 3D TV. You can tweak the 3D image from the setup menu, including a choice of formats as well as distance and screen type adjustments. You can also add a frame to the picture that might make it more comfortable to watch.

The Panasonic DMR-HW220 boasts some serious network credentials. It’s DLNA-certified, which means you can use it as a client to stream media from PCs and other devices around the home. The HW220 also acts as a server, allowing you to watch non-restricted recordings made on this unit on other clients around the home – or watch recordings made on other recorders. Smartphone/tablet owners can also use the unit as a renderer and control it with the mobile device. 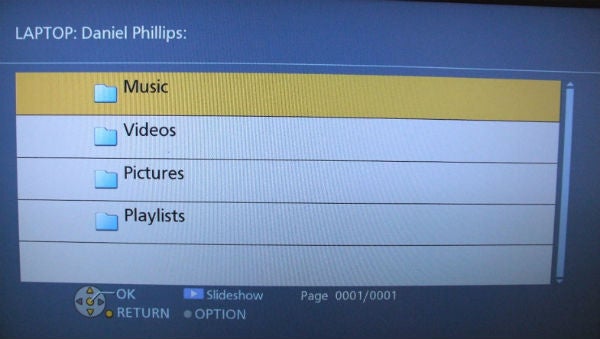 Network format support is decent, including AVCHD, DivX, MP4, MOV, JPEG, MP3, FLAC and PCM. During our test it found content quickly with no annoying delays but disappointingly it won’t play MKV over a network – for that you have to load it onto a USB drive but when we did it wouldn’t play the DTS audio track.

You can also copy music, video and photos onto the hard-disk to save you faffing around with USB sticks each time, and with such a capacious HDD you can squeeze loads on there without impinging greatly on TV recording time. Playback of AVCHD, JPEG, MPO and MP3 is supported from the hard-disk, while AVCHD, JPEG, MPO, MP4 and MPEG-2 (SD Video) are supported from SD cards.

Finally you’ll find Viera Connect on this unit, complete with its range of video streaming and social networking sites. The choice includes Netflix, BBC iPlayer, YouTube, Acetrax, Twitter, Picasa, CNBC, Dailymotion, Facebook, AUPEO! and more, which is a much better choice than Viera Cast, although Samsung’s Smart Hub is much more fun. There’s also a Rovi guide EPG, which provides an alternative to the built-in version.

Operation
From the very start the DMR-HW220 proves to be a friendly, helpful and cooperative PVR. It tunes in channels automatically when you first boot up, then runs through the network setup modes using a series of self-explanatory screens. 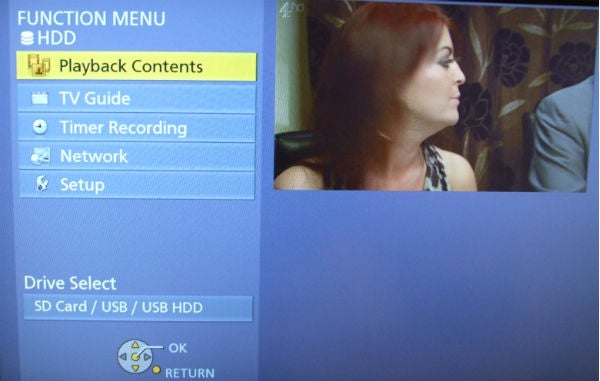 The onscreen menus haven’t been upgraded to the flashy new design of Panasonic’s latest Blu-ray players, but presentation is still clear and engaging, with excellent use of bright colours, large text and cute icons. Some of it looks a little old now – particularly the Functions and Direct Navigator menus with their chunky yellow blocks on blue backgrounds – but who cares when it’s this easy to use?

The Direct Navigator menu displays recorded programmes in a list with moving thumbnails to the left. Tabs running across the top filter the recordings into genres (Movie, Drama etc) and one tab lists copied AVCHD files. You can switch to music or photos using the red button. 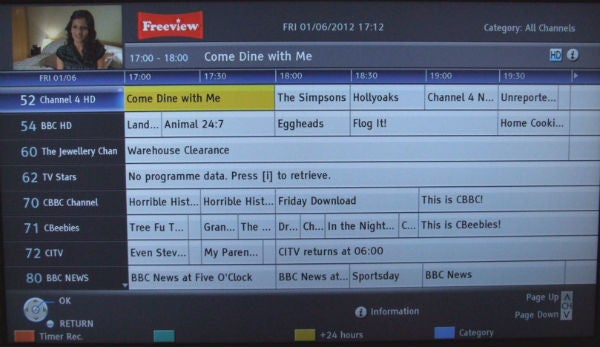 The EPG has had a long overdue revamp, and is all the better for it. Gone is the annoying grey block (hurrah!), which means the large eight-channel programme grid stretches across the entire screen. The layout is beautifully crisp and colourful, with colour-coded options across the bottom. Live TV plays in a small box in the top left corner, and to view programme synopses simply hit the ‘i’ button. The Rovi guide’s layout (below) is slightly more impressive (it places programme thumbnails in the grid, for instance) but sadly it’s a lot more sluggish to navigate and there’s no live TV box, making the built-in EPG the better option. 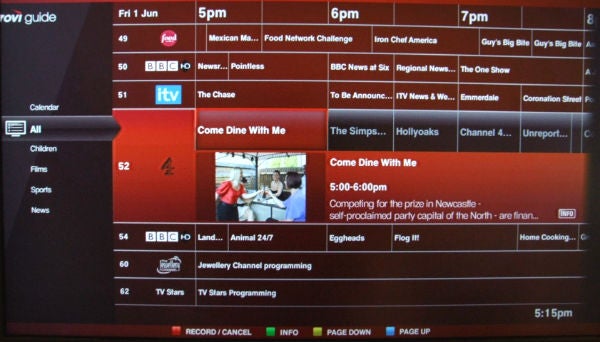 Setting recordings from the EPG is easy – just select the programme and hit OK. It takes you to a confirmation screen asking if you want to view or record it, either as a single programme or as an entire series. For recording, you’re taken to a second confirmation screen, which seems a little long-winded but at least you can check all the details thoroughly.

To make recording even easier, Guide Link tracks changes to start and stop times, and it’ll automatically record split programmes. Another nice touch is the onscreen programme banner which saves you the trouble of visiting the EPG, allowing you to browse channels using the direction pad – although you can only view ‘now and next’ info. Also worth noting is that when two recordings are in progress, you can switch between the two channels being recorded, and you can view the EPG too (you can’t on the Samsung BD-E8500).

The remote is classic Panasonic – none of this touch pad malarkey seen on the Blu-ray player remotes. The chunky buttons, foolproof layout and clear labelling make it blissfully easy to use, although the amount of buttons crammed onto it make it feel a little cluttered. As ever, the direction pad is ideally placed under the thumb, with Direct Navigator, Guide and Function menu keys helpfully fanned out above it.

Performance
Not only is the DMR-HW220 easy to use, but it also performs brilliantly. The Freeview tuners provide great looking pictures, with solid chunks of colour, sharply resolved detail and clean edges. The HD channels obviously show the HW220 at its best, making even dreary daytime guff like The Renovation Game on Channel 4HD and Dickinson’s Real Deal on ITV1HD worth watching. Most pleasing is the lack of picture noise, which allows the extra high-def resolution to shine through the screen unhindered.

Standard definition channels are consistently watchable, with only slight hints of block and mosquito noise. It’s worse on some channels thank others – ITV2 looks feathery, while regular BBC One is more solid – but that’s down to broadcast bitrates.

The DMR-HW220 holds up its end of the bargain though. The on-board 1080p upscaling is clearly doing a terrific job, as detail looks crisp, edges lack jaggies and movement appears smooth. Recordings look identical to the live broadcast too, so there’s no quality sacrifice involved when timeshifting. Unlike the more advanced Blu-ray recorders there are no recording modes to change the quality, making everything nice and simple.

There are no complaints with sound quality either – we streamed a batch of MP3s and spun a couple of CDs and the results were enjoyable through our sound system, making this a decent digital jukebox.

Viera Connect’s video streaming sites like BBC iPlayer work smoothly, offering impressive HD picture quality to boot, while digital text loads up in a flash, putting our cumbersome Sky HD box to shame. We also tried converting some 2D content to 3D and it worked fairly well but we imagine it won’t be long before the novelty factor wears off.

Verdict
With a superb range of features, slick recording functionality and a massive 1TB hard-disk, the DMR-HW220 is an excellent PVR. Panasonic has righted all the wrongs of previous models – including, crucially, the EPG, which is now much easier to use – while the inclusion of built-in Wi-Fi, DLNA and Viera Connect extend your entertainment options well beyond the confines of Freeview. Viera Connect lacks the fun factor and extensive content of Samsung’s Smart Hub, but in every other respect it’s more than a match for its Korean counterpart – and at £260 it’s cheaper too.