Want to cut down the ever-growing number of boxes under your telly but can’t bear to throw out your clunky old VHS cassettes? Then the DMR-EZ49V could be the solution you’re looking for. It fuses together a DVD recorder and VHS VCR, creating a single unit that not only lets you watch your videos and DVDs (in upscaled 1080p, no less) but also provides a convenient, cable-free way of transferring treasured tapes onto durable digital discs.


It’s worth pointing out that the DMR-EZ49V is not equipped with a hard-disk, making it best suited to casual users with infrequent recording habits, and people who want a tool for backing up programmes from their PVR. But if you want a hard-disk too, then check out the DMR-EX99V, which adds 250GB of memory as well as an SD card slot – the replacement for the DMR-EX98V. Interestingly, Panasonic hasn’t replaced the DMR-EZ28 DVD-only model this year – does this spell the end for the standalone DVD recorder?

Anyway, we digress. Although it lacks a hard-disk, the DMR-EZ49V does support a comprehensive range of recordable DVD formats (grandly dubbed ‘Super Multi-Format Recording’), which has been a key feature of Panasonic’s recorders for many years. Most useful is DVD-RAM, which lets you perform many of the non-linear recording tricks that you can on a hard-disk, even more than DVD-RW discs formatted in Video Recording (VR) mode. But for permanent archiving you get a full house of write-once formats, namely single- and dual-layer DVD-R and DVD+R. However, on dual-layer discs, seamless recording between the two layers isn’t possible – the deck stops recording when the first layer is full and you have to close it before recording on the second.


When using one of these dual-layer discs, you get just over 14 hours of recording time, but that’s assuming you record everything in the lowest quality EP mode. In the highest picture quality XP mode you can fit one hour and 45 minutes onto a dual-layer disc. A single layer disc can hold one hour in XP and eight hours in EP. Two other presets are provided to help you choose the appropriate picture quality for the material – SP and LP – as well as Flexible Mode, which can squeeze a timer recording into a given space in the optimum quality. And in the unlikely instance you want to record onto VHS tape, there are three recording modes – SP, LP and EP. 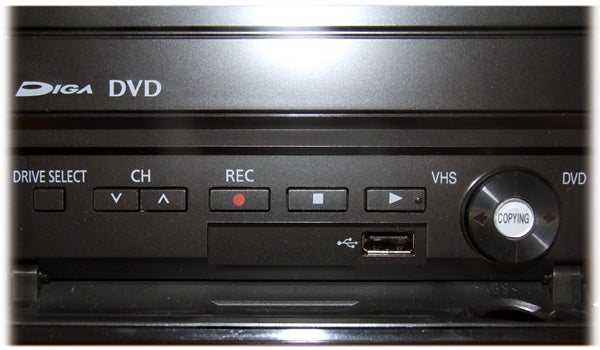 As you’d expect the DMR-EZ49V is fitted with a Freeview tuner, but as per usual we’d have preferred twin tuners so you could watch one channel while recording another on DVD. It’s something Panasonic has managed on its Freesat recorders so why not here? Sure, there are technical challenges to overcome and it would bump up the cost, but plenty of people would be willing to pay extra for the privilege – after all, nobody likes being locked into the channel that’s being recorded.


Panasonic isn’t alone in this limitation – there are currently no Freeview DVD/HDD or DVD-only recorders on the market with twin-tuners – but you’d have thought someone would have had a go by now. The only way round it is to use the Freeview tuner in your TV but that’s not particularly convenient, and not every TV has one. Perhaps a bigger issue is that this deck won’t be able to pick up Freeview HD, so if hi-def is important it might be worth waiting for the first DVB-T2 recorders to come through.

So what else do we find inside the DMR-EZ49V? In terms of multimedia playback, it’s fairly obliging, although the lack of WMA support might be problematic for some. You can play DivX, MP3 and JPEG from drives connected to the front-mounted USB port, or the same file types from CDs and DVDs.


As for DVD recording and editing, this deck offers all the tricks found on the DMR-EX83. DVD-RAM discs offer the greatest flexibility – with one of these in the tray you can create playlists of various chapters and titles; delete combine and create chapters; divide a title; delete part of a recording by entering start and stop points and watch a recording from the start before it’s finished. Other disc types offer more basic editing features, but one useful feature common to all formats is Auto Chapter Creation, which inserts markers when there’s a lengthy gap in the audio – we tried it a few times with various commercial channels and it found the beginning and end of the ad breaks every time.

Also pleasing is that the deck starts recording almost instantly after pressing record, almost as quickly as hard-disk recording on the DMR-EX83, and you can get some very accurate edits by pressing pause on the remote while recording. Using the Partial Delete function, the edit points are clean as a whistle, with no picture noise or audio problems. There’s a myriad other DVD features to explore, but on the VCR side you get automatic indexing, S-VHS Quasi Playback (SQPB) and Jet Rewind.


On the outside, the DMR-EZ49V is just a thick hunk of black plastic with only a large, easy-to-read information panel to brighten up the front. Along the bottom are the auxiliary inputs – S-video, composite and analogue stereo – as well as a cluster of playback buttons and the USB port for digital media playback. There’s a circle containing two buttons for convenient one-touch copying between DVD and VHS and vice versa.

On the back, the deck offers everything you need. The HDMI port fires Freeview, DVD, VHS and anything else to your TV in upconverted 1080p, 1080i or 720p, while the SCART output offers RGB and composite video. When recording from external sources, the SCART input supports RGB, S-video and composite as well as the EXT Link feature, which starts the deck recording when a signal is detected from a connected digibox. The line-up is completed by composite, analogue stereo and optical digital audio outputs.


The onscreen menus are identical to the DMR-EX83, and as a result share the same level of simplicity. It’s all very bright and colourful, making it a blessing for digital recorder newcomers, and the structure is generally logical. The Direct Navigator is particularly good, showing each recording with a moving thumbnail when highlighted, and for Freeview programmes it displays the name too. 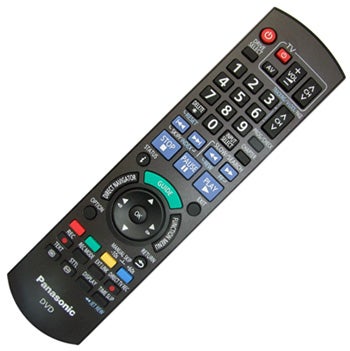 But there’s a few things we don’t like about the DMR-EZ49V’s onscreen design. The Guide Plus EPG is a garish mess, with a large grey advertisement block taking up much of the space and making the programme grid look unnecessarily squashed. The rest of the space is taken up by colour-coded options and instructions, which makes it very cluttered. The placement of the setup menu is another slight niggle – it’s hidden away in a submenu when it should have been prominently placed in the main Functions menu. It’s also a shame that you can’t browse the entire digital TV schedule menus using the onscreen banner, but it only contains now and next information.


The remote is terrific. Large, responsive buttons, clear labelling and an intuitive layout make navigation a swift and hassle-free experience.

The DMR-EZ49V is an excellent performer across the board. With the upscaling set to 1080p, DVD movie playback is crisp and artefact-free, and live Freeview pictures are very strong. We watched a lot of fast-moving events from the ”Winter Olympics” on the BBC, such as ice hockey, skiing and bobsled, and were impressed by how smoothly the competitors move and how sharply their edges are defined when set against crisp white backdrops. Fine detail, like the puffs of snow as skiers come to a stop, are rendered with pleasing clarity and colours are deep and rich but always convincing. Superb.


Select XP and recordings are preserved on DVD-RAM in exactly the same quality. It’s only when you start recording stuff in LP that you start to notice artefacts like mosquito and block noise, and in EP images are excessively soft and juddery – use sparingly.

When dubbing VHS to DVD, don’t expect miracles – the results are only as good as the source tape. But in our tests, a ropey old tape of TV shows stepped superbly into the digital domain using the two-hour SP mode, with well-judged colours, robust blacks and minimal audio hiss. It’s noisy but watchable. And copying in any direction is simple thanks to the easy to follow, step-by-step screens. You can set the amount of time to be copied or just record the entire tape in one go. Using the same screen you can move pictures from USB to DVD-RAM.


There are no problems with USB playback of video, music or photos, and the deck displays the latter in crisp high-definition, which is a real bonus. On a more negative note, digital text is surprisingly sluggish and CD playback is merely average, but this was never a deck designed to satisfy audiophile tastes.


It’s still hard to believe that VHS is still going strong in 2010, but the mere existence of this combi is proof that there’s a lingering demand for it. And the DMR-EZ49V is a great example of how to integrate ageing tape tech with modern digital recording, thanks to its bulging feature list and an abundance of slick recording/editing features, even without a built-in hard-disk. It’s simple to copy cassettes to DVD and the results are impressive, provided your tapes are in good nick. What’s more, the operating system is infused with the company’s usual user-friendliness, plus DVD and Freeview picture quality is top-notch, especially when you employ the 1080p upscaling.


But this deck shares the same flaws as Panasonic’s DMR-EX83. The EPG and onscreen digital TV banners need a dramatic rethink, while the bigger issues of a single Freeview tuner and incompatibility with the incoming Freeview HD service might force some to put away their wallets, particularly at this price. But if you need a VHS/DVD solution right now, then you won’t find many better.