Panasonic is still the only AV manufacturer to launch Blu-ray recorders in the UK, making it the go-to brand for people who want to record hi-def Freeview programmes and back them up on high-capacity Blu-ray platters. We’ve already checked out this year’s flagship model, the DMR-BWT800, which boasts a 500GB hard disk, and were hugely impressed by its range of features and overall performance. The DMR-BWT700 is also 3D-capable and sports twin Freeview HD tuners, but comes with a smaller HDD (320GB) and a few other differences. Let’s find out if it can still emulate the success of its sibling.

On the outside the DMR-BWT700 is a great-looking machine. It’s built into a satisfyingly sturdy case, while the flap covering the entire front panel makes it sleek and uncluttered, and it’s glammed up further by a graduated silver strip at the bottom. Under the flap you’ll find a USB port, SD/SDXC/SDHC card slot and play/stop buttons. The display panel is easy to read and there are lights that indicate which tuners are being recorded.

The rear panel is adorned with a useful array of sockets, but it lacks the second HDMI output found on the BWT800. That’s potentially bad news for owners of AV receivers that can’t handle 3D signals via HDMI, as you can’t pipe 3D pictures and HD audio separately – you’ll have to settle for regular Dolby Digital or DTS from the coaxial digital audio output. Joining the single HDMI are an Ethernet port, RF in/out, composite, optical digital audio and analogue stereo outputs, plus two Scarts for recording from external devices – essential when backing up VHS tapes on disc.

Unlike the DMR-BWT800, there’s no built-in Wi-Fi, so in order to avoid Ethernet ignominy you’ll need to invest in Panasonic’s DY-WL10 USB wireless LAN adaptor. Trouble is, the BWT700 also supports Skype – allowing you to make video calls to family and friends from the comfort of your sofa. This not only requires the purchasing of the rather expensive TY-CC10W USB communication camera but if you buy both camera and LAN adapter, you’ll need to connect the camera to the front-mounted port, which not only looks ugly but also leaves nowhere to plug in your USB sticks. 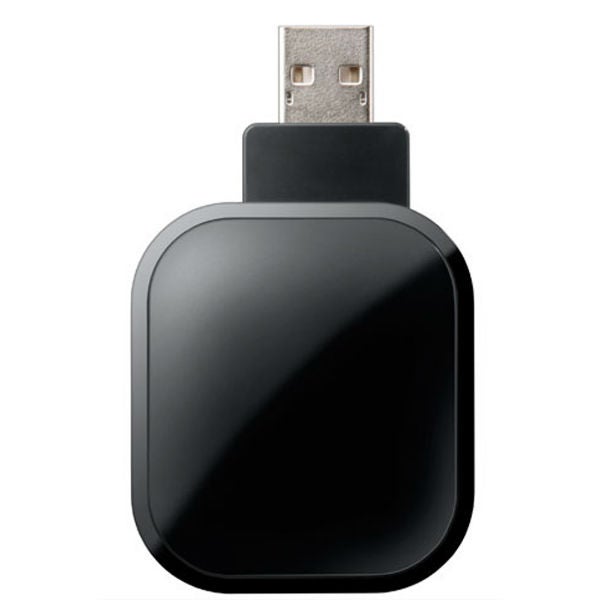 Still, it’s great to see Skype on the spec sheet at this lower price point. We’ve really grown to love this feature and the superb user interface makes it an absolute breeze to use. It’s part of Viera Cast, which is still being included instead of the newer Viera Connect found on the latest Panasonic TVs. It’s a shame because its content is behind the times compared with other manufacturers – there’s no BBC iPlayer, for instance, which is made all the more galling by the fact that Panasonic’s Freesat recorders can now receive iPlayer thanks to a recent firmware upgrade. 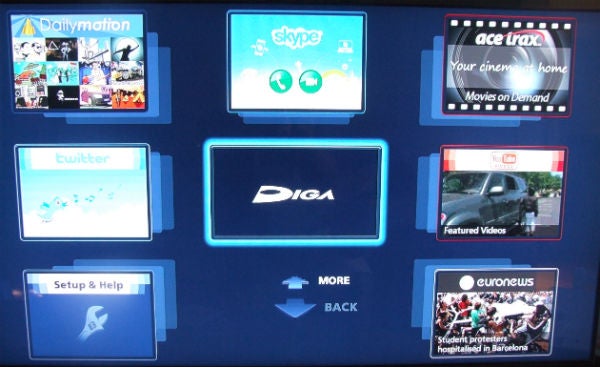 When hooked up to the web you can also stream media from devices on your home network, as well as watch recordings on this unit on other networked Panasonic components. The deck’s multimedia talents are impressive – it supports DivX HD, MKV, JPEG, MP3, WMA, WMV, MPO and AVCHD from USB, plus AVCHD, MPEG-2, JPEG and MPO from SD cards. Remember that you can also copy SD Video, AVCHD, MP3 and JPEG photos to the hard disk to create your own media jukebox, and rip tracks from CDs directly onto the HDD, with an online Gracenote database on hand to tag your tracks automatically.

On the recording side, there’s very little this deck can’t do. You can record Freeview programmes onto the HDD and not directly onto Blu-ray, but everything is recorded in DR mode, which basically records the raw bitstream and ensures the highest picture quality possible. Copy protection is in force, which generally means that you can only make one Blu-ray copy.

Using DR mode, up to 79 hours of HD programmes can be recorded on the 320GB HDD, or 258 hours of SD, which might not be enough to satisfy those who hit the series link button for everything. If they do start to take up too much space you can compress them afterwards using a range of five HD recording modes (HG, HX, HE, HL, HM), which make the files smaller without greatly reducing picture quality – although it’s a time consuming process. That’s handy when backing up to Blu-ray and you want to squeeze as much onto a disc as possible – the lowest quality HM mode fits 35 hours of HD onto a dual-layer BD-R, compared with 13 hours in DR mode. You also get four SD recording modes (XP, SP, LP, EP) which can be used to record from external devices via Scart or when recording onto DVD.

On the Freeview HD side, it does everything you’d expect from a twin-tuner PVR – pause/rewind live TV, simultaneous recording and playback and recording of two channels at the same time, although when doing the latter, network functionality is greatly reduced. Features like the eight-day EPG, series link, guide link and broadcaster recommendations ensure you never miss your favourite programmes.

There’s a vast array of editing features too, which allow you to remove unwanted parts of your recordings or split titles in two, and it’s easy to carry out these functions thanks to the simple onscreen menus and clear instructions. They’re useful for tidying up recordings before committing them to disc. 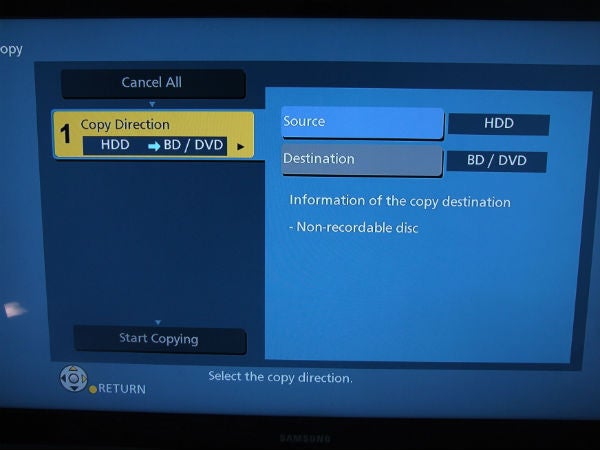 With so much going on elsewhere, it’s easy to forget that the DMR-BWT700 is also a fully-fledged Profile 2.0 Blu-ray player complete with 3D playback, and on that score it features the usual range of picture tweaks – screen frame, screen depth and 2D-to-3D conversion, which works with discs and with Freeview programmes recorded onto the hard disk.

Panasonic’s standalone Blu-ray players were treated to a fresh new GUI this year, but the recorders stick with last year’s. That’s not a disaster, as the onscreen design is easy on the eye and generally co-operative, but certain areas feel disjointed and long-winded – for instance accessing the setup menu from the main Functions menu requires a couple of extra button presses than we feel is necessary, and when setting series link you’re shown two conformation screens before you’re done. 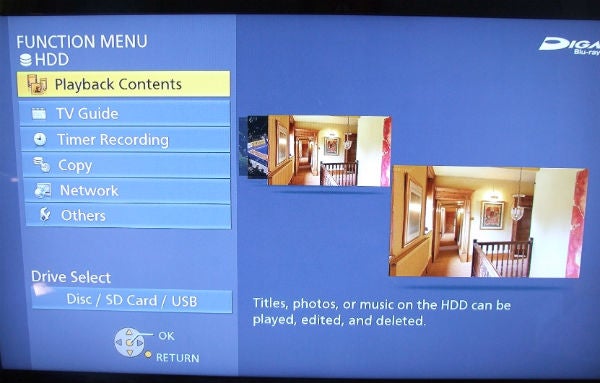 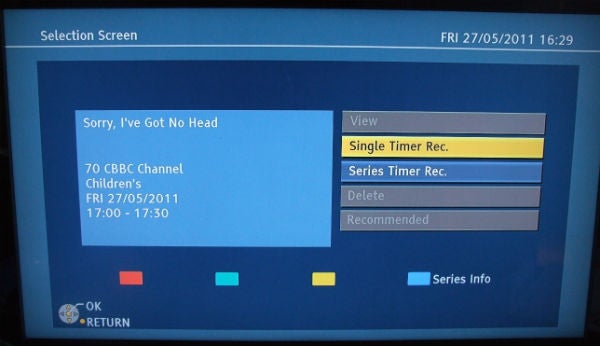 And we’ve said it before, but Panasonic’s cluttered EPG needs a serious overhaul for next year. An empty advertisement box hogs space that could have been used to expand the seven-channel programme grid – instead the boxes are cramped and you can’t read the names properly. You can switch to a portrait single channel view, but it’s yet more fiddling about.

The onscreen Freeview banners offer up more annoyance – you can only view now and next information for each channel, denying you the chance to browse the entire schedules without entering the full EPG. There’s decent info about each programme though, including a synopsis if you hit the ‘i’ button. 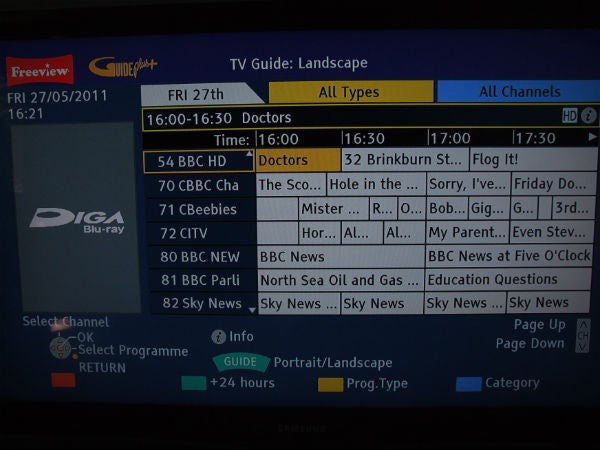 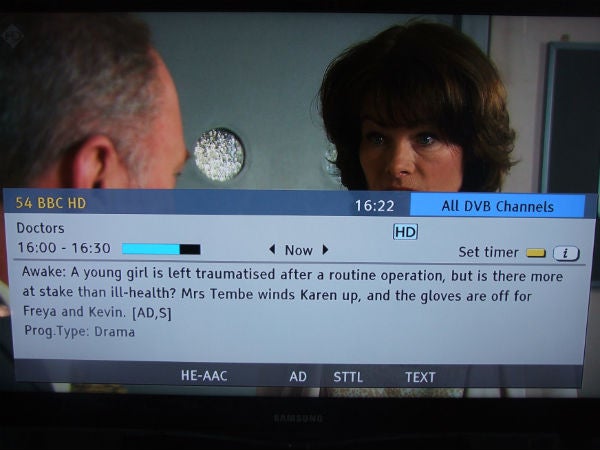 Thankfully, the deck is more helpful in other areas, using clear, informative dialogue boxes to resolve conflicts and make adjustments.

And the other menus are easy to work with and attractive, particularly the Direct Navigator, which presents your recorded programmes in a list with a moving thumbnail and all the information you could need (including the number of Blu-ray copies you can make), plus finding the editing menu is a breeze. 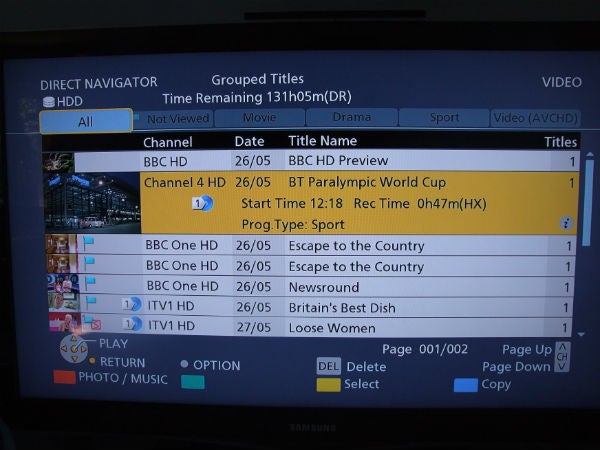 We didn’t have any trouble setting up the network functionality – Panasonic kindly provided us with a Wi-Fi dongle and it worked well, hooking up to our network instantly and streaming a variety of files without any glitches to speak of. And although we criticised its content, Viera Cast is actually a joy to use thanks to the pretty layout and responsiveness of the interface. YouTube videos streamed smoothly and only stopped to buffer occasionally.

You get the same remote as the DMR-BWT800, which means more chunky, multicoloured buttons with excellent labelling. There are buttons providing instant access to Viera Cast and Skype, plus a cluster of keys at the top that control TVs using the codes supplied in the manual.

The DMR-BWT700’s Blu-ray playback is just as masterful as Panasonic’s standalone players when it comes to producing hi-def pictures. Dazzling detail clarity and effulgent colours are the order of the day, resulting in a picture that smacks you round the chops with its sheer sharpness, depth and solidity.

The same can be said for 3D pictures, with Panasonic’s proprietary picture tech preserving the subtle detail on the disc and reproducing the layering and picture depth without any major artefacts or glitches. If the image doesn’t suit, simply fiddle with the depth and screen type settings, but leave the screen frame feature well alone.

There are absolutely no complaints with the BWT700’s recording quality. DR recordings unsurprisingly look exactly the same as the live broadcasts, while compressed recordings in HG down to HM maintain a distinct hi-def look despite the lower bitrates used. We captured and compressed tennis from Wimbledon (BBC One HD) and it replayed the action smoothly without much shimmery noise, and kept track of the ball with pin-sharp precision. We didn’t think much of the 2D programmes converted to 3D, but with 3D Freeview channels not coming for a while (if at all) you might be tempted to give it a go.

Sonically, the DMR-BWT700 is never going to satisfy audiophile tastes with so much crammed into this busy unit, but CD playback is pleasant enough even without the enjoyable Digital Tube Sound modes found on the DMR-BWT800.

Verdict
With a more miserly hard-disk capacity, optional Wi-Fi and a single HDMI output, the DMR-BWT700 doesn’t have quite the same formidable feature set its bigger brother, but at around half the price it’s not an unreasonable trade-off. It’s not the most user-friendly Panasonic product we’ve encountered though – disjointed menus and a terrible EPG are the main culprits – and we’d like to have seen Viera Connect instead of Cast. But there are still loads of features on board, the highlights being DLNA, 3D and Skype, and when combined with comprehensive recording and editing functionality and superb Blu-ray playback it’s still a mightily impressive product.