Web browser aside, the Panasonic DMP-BDT330 is an absolute joy to use thanks to its intuitive and eye-catching onscreen menus. The layout of the Home menu is essentially the same as last year’s players, except that Panasonic has sharpened it up with new fonts that suddenly make everything seem more sophisticated. 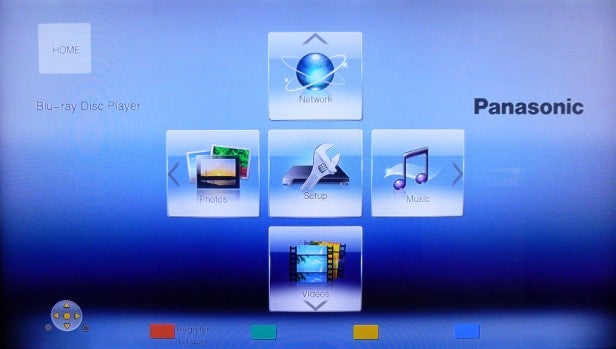 The Home menu sports five tiles arranged in a cross, replicating the layout of the remote’s direction pad – one press of the pad takes you directly to the corresponding option. As a result it’s quick and easy to get from one menu to another.

Different users can customise the home page using a range of backgrounds and attractive icons, plus you can add your own photos and nicknames. 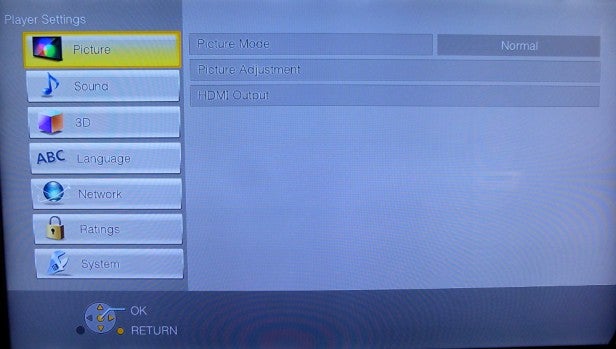 The Setup and Options menus are also clear and thoughtfully arranged, putting a thorough range of tweaks at your disposal. The media playback menus still look basic with their huge blocks of colour, although the new fonts jazz them up a bit. They’re also clunky to use because they only display five files at a time and there’s a pause when you move to the next page.

Panasonic has wisely ditched the touchpad remote of the DMP-BDT320 and reverted back to a good old-fashioned button-based zapper. The touchpad had its benefits, but inaccurate commands made navigation more frustrating than it needed to be.

There’s none of that here. The logical layout of large, rubbery buttons leaves no room for doubt, and there are some handy shortcuts – Netflix gets its own big red button bang in the centre, while Miracast and Internet keys are found towards the top.

The DMP-BDT330 delivers scintillating picture quality with Blu-ray discs, some of the best in the business in fact. With our trusty copy of The Hobbit: An Unexpected Journey in the tray, the BDT330 teases out every last scrap of detail from this pristine transfer, making the movie look crisper, punchier and more stable then ever.

As the camera pans up and over the village of Dale during the prologue, the tiled roofs and brick walls not only look remarkably sharp but also hold steady as the camera moves, making the shot look incredibly smooth and composed. This also holds true for the mountainside rock textures in the background.

We then continue to marvel at the sheer lucidity of the picture as Thror steps into the frame. Every strand of the dwarf king’s wispy beard is visible, while his patterned robes and gleaming armour look gloriously punchy. In places the deck’s detail is perhaps too good, exposing Bilbo’s caked-on make up and the stagey feel of the sets.

Colour accuracy has long been a forte of Panasonic players and it’s in evidence again here. Elven skin tones, luscious green Kiwi hillsides and dramatic blue skies look natural, plus their believability is boosted by smooth tonal blends and subtle details within every object. There’s no need to muck about with the picture presets either, as the best results are achieved in the default Normal setting.

Swap to the 3D disc of the same film and every scene boasts a wonderful sense of depth and poise that helps you enjoy the most immersive 3D experience possible.

And with our DVD copy of Se7en – the age-old scourge of budget decks everywhere – it handles the gloomy settings with impressive clarity and composure. There’s barely any blocky MPEG noise on the background walls, while detail looks sharp and muted colours are deftly rendered. There’s the odd touch of shimmery noise and jagged line, but on the whole Panasonic’s processing does a terrific job.

Next we checked the player with the Silicon Optix HQV disc and not a single test tripped it up. It skilfully side-stepped strobing on the Film and Video Resolution Loss tests, while the moving white bars of the jaggies test boasted completely straight, clean edges. The camera pan across the Raymond James stadium has rarely looked better, with no moiré noise in the upper tier of seats.

Finally, disc loading speeds are fast. With a regular 2D disc like The Hobbit, it went from an open tray to the Warner logo in 25 seconds, while the more Java-heavy Terminator Salvation disc fired up in a very respectable 30 seconds.

Should I buy the Panasonic DMP-BDT330?

Although expensive, the DMP-BDT330’s stunning design, comprehensive feature list, top-drawer pictures and user-friendly operating system (helped by the switch back to an old-school remote) won’t leave you feeling short-changed.

The addition of Miracast is a real boon for Android smartphone users, while Viera Connect and DLNA file streaming will keep you entertained in between Blu-ray viewings. 4K upscaling isn’t quite the big selling point Panasonic would like it to be given that UHD displays already do the upscaling for you, but it’s reassuring to know the deck can do it. Twin HDMIs is probably a more useful feature.

It’s not all a bed of roses though. Viera Connect is in desperate need of a makeover and its content is no match for Samsung’s extensive selection. Format support via DLNA could be better too, but these things aside the DMP-BDT330 is a brilliant Blu-ray player that deserves a place on your shopping list.

A juicy feature list, gob-smacking design and stellar performance put the DMP-BDT330 among the Blu-ray elite, but online content and presentation is the deck’s weak link