Panasonic has been a Blu-ray innovator since the format’s inception, but in the last few years it has grown increasingly hard to see where they can take the technology next.

However, with its latest range-topping disc spinner, the DMP-BDT330, Panasonic has managed to freshen up its Blu-ray offering with a couple of new tricks alongside established features like 3D support, web content and media streaming.

The deck, which launches in April, is one of four players unveiled at the company’s 2013 convention in Nice, alongside two other 3D-capable models – the DMP-BDT230 and DMP-BDT130 – and a 2D model, the DMP-BD79. The compact DMP-BBT01 and high-end DMP-BDT500 continue.

The key new addition is Miracast, a ‘display mirroring’ feature that allows you to stream hi-def videos, music and photos from an Android smartphone or tablet to the player, and view it on your TV – all with the swipe of a finger (as demonstrated by Panasonic’s Caleb Manning, below). 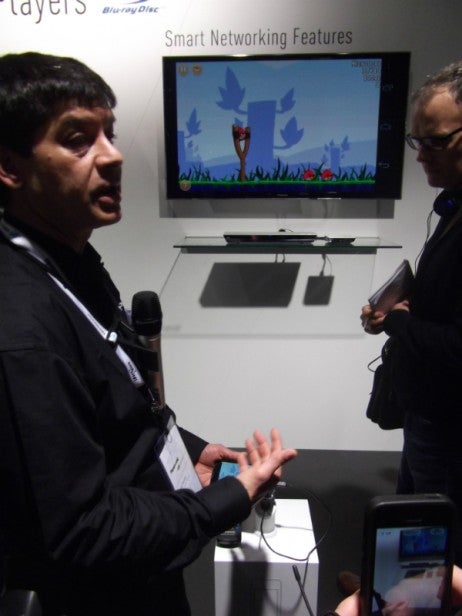 Found on the BDT230 and BDT330, Miracast is a peer-to-peer screencast standard that uses Wi-Fi Direct, and allows you to send video (up to 1080p) and 5.1-channel surround sound (AAC, AC3, LPCM). It’s designed to simplify the connection for users and is found on devices like Google’s Nexus 4 smartphone, having been added to Android (version 4.2) in October.

As the home cinema world moves slowly but surely towards a 4K future, Panasonic has ensured the BDT330 is ready. Its built-in 4K upscaling means you can convert 1080p Blu-rays to that resolution before sending it to your screen or projector, so the display doesn’t have to do any of the donkeywork. It’s by no means the first Blu-ray player to offer this feature – that accolade goes to the Sony BDP-S790 – and 4K displays are still a rich man’s plaything, but any futureproofing is always welcome. 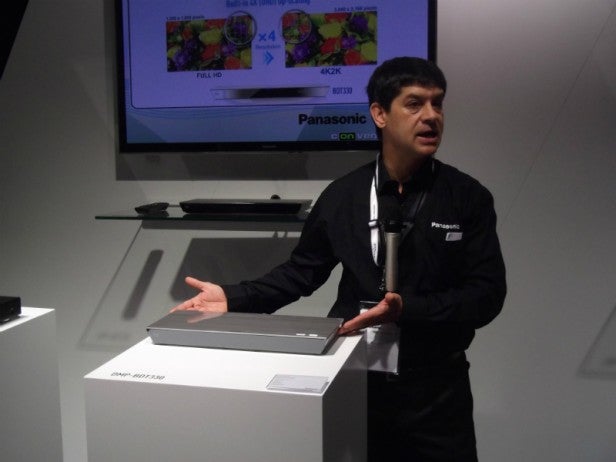 Elsewhere the deck comes with built-in Wi-Fi, naturally, which provides access to an ‘expanded’ version of Viera Connect – it’s unclear exactly what services will be available in the UK, but expect BBC iPlayer, Netflix, YouTube, Acetrax, Skype, Facebook and Twitter, with new apps being added all the time in the Viera Marketplace.

Sadly the deck doesn’t benefit from the new single screen Viera Connect layout introduced on Panasonic’s 2013 smart TVs – it sticks with the same menu as last year’s models, which means you’ll have to flip through page after page of apps to see them all.

Add to that DLNA media streaming and a web browser with a new pointer cursor to make surfing easier, and the BDT330 looks every bit as network-savvy as its excellent predecessor, the DMP-BDT320.

As well as supporting Full HD 3D Blu-ray discs, the BDT330 will also convert 2D to 3D on the fly, which means you can give your DVDs and 2D Blu-rays the stereoscopic treatment.

The BDT330’s design continues the sharp-angled ‘prismatic’ bodywork introduced on the BDT320, as well as continuing the industry’s bizarre fascination with making things look like they’re floating – basically there’s a little gap between the player and the surface it sits on. The brushed aluminium top plate and sleek dimensions ooze 21st century chic. 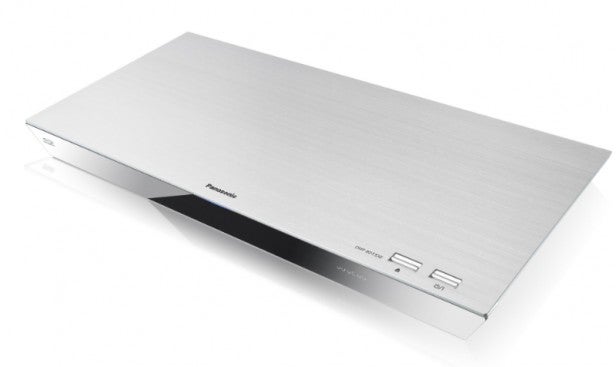 Looking at the deck’s rear panel, Panasonic has re-introduced the twin HDMI outputs missing from last year’s DMP-BDT320, which means it’s still keen to cater for those with non-3D AV receivers, or those who want to feed two displays at once. You’ll also find an Ethernet port, an optical digital audio output and USB port that supports external HDD playback.

The remote is classic Panasonic, with chunky buttons and clear labelling, but thankfully none of the touchpad malarkey that caused a few issues when operating the DMP-BDT320. 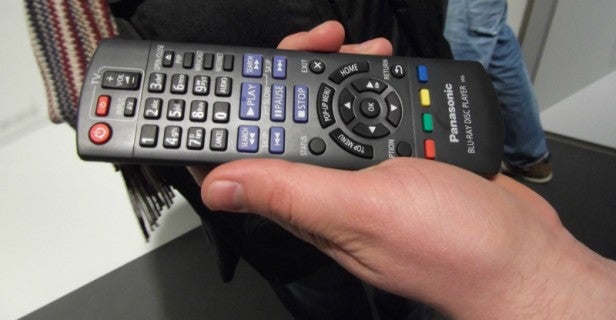