What is the Panasonic DMP-BDT270?

The DMP-BDT270 is a budget Blu-ray player that brings you hi-definition pictures without breaking the bank. It’s positioned just below the £100 DMP-BDT370 in Panasonic’s latest range, but weirdly sells for £30 more than the BDT370 on the Currys website (at the time of writing).

Like the DMP-BDT370, this model offers 4K upscaling, internet apps and DLNA streaming. On paper it looks like terrific value for money, but let’s find out how it fares in practice.

The DMP-BDT270 is a fine-looking deck from afar, with curved corners, gloss-black side panels and an eye-catching silver top plate – which is also available in black. Like most recent budget models it’s half the size of a regular Blu-ray deck, measuring a space-saving 312mm wide. 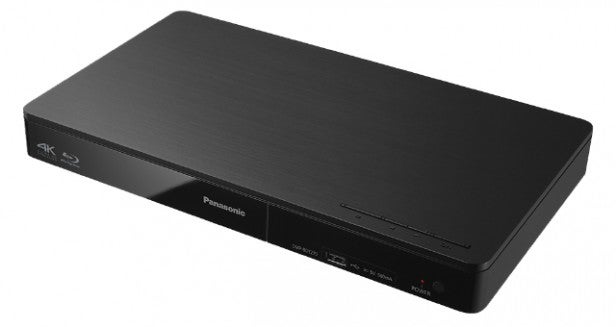 Up close it isn’t as impressive. The top panel is fashioned from flimsy plastic and the whole thing feels like it could float away in the next strong breeze. That’s pretty common among budget players, but it doesn’t inspire confidence.

There’s no display on the front panel apart from a small red light when the unit is switched on. It does sport a USB port though, which allows you to play media from flash drives or charge devices. On top is a row of four buttons – power, eject, play and stop.

Connectivity is basic, with only two sockets on the rear: an HDMI output and Ethernet port. This should suffice for most users, but if you need an optical digital output then you’re better opting for the DMP-BDT370. There’s also built-in Wi-Fi, making it easy to get online.

Connect the deck to your internet router and you can access a decent range of apps. Highlights include BBC iPlayer, Netflix, Amazon Instant Video, YouTube, BBC News, BBC Sport, Facebook and Twitter, but there are plenty of lesser-known apps in the Market menu.

Most people will be happy with that, but it’s worth bearing in mind that LG’s players additionally offer Spotify and Now TV, while Samsung’s top-end decks provide ITV Player and All 4. 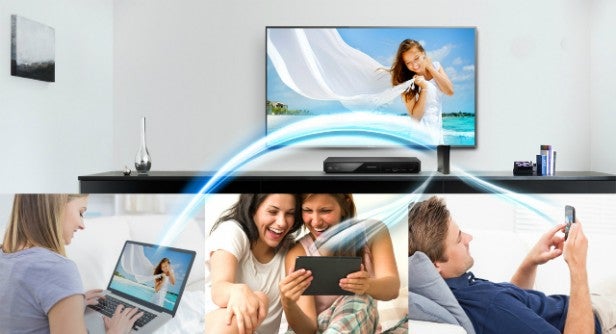 You can also use the online connection to stream media files from devices on your home network. Most video and music formats are supported via DLNA, including MP3, WMA, AAC, MKV, AVI, WMV, AVCHD and XviD. However, I couldn’t stream FLAC or ALAC despite Panasonic’s claim that it supports them. I could play them from a USB stick though, as well as DSD.

Android users can take advantage of Panasonic’s Miracast connection, which beams your phone’s screen to your TV, while 3D Blu-ray, Dolby TrueHD, DTS HD Master Audio and 4K upscaling support are all welcome. The Panasonic DMP-BDT270 lacks the 4K JPEG playback found on the DMP-BDT370, however.

The DMP-BDT270 comes with a classic Panasonic remote. The rubber buttons are clearly labelled and arranged for maximum convenience. It’s not backlit, but the playback buttons are helpfully coloured blue. Netflix subscribers can literally shave seconds off the loading time with a dedicated white button on the remote.

Using the DMP-BDT70 is a joy, thanks to the slick Home menu. It’s getting on a bit now, but looks great and remains sprightly in its old age. As ever, the layout is intuitive – the five tiles are arranged in a cross that corresponds to the direction pad on the remote, with the middle tile represented by the OK button. Press a button and it takes you instantly to the relevant sub-menu, without having to press OK every time.

Sharp text and tasteful pastel colour schemes are the order of the day, while the DLNA and USB menus follow a logical list structure with a large yellow block indicating your selection. The homescreen can be customised with your own photos.

I’m still disappointed by the Internet Apps menu, which has been in need of a revamp for some time now. It looks nice, using a series of large colourful tiles, but the way it spreads them over several pages is clumsy, and the software is fairly slow to react. Adding new apps from the Market area is a bit of a grind too. 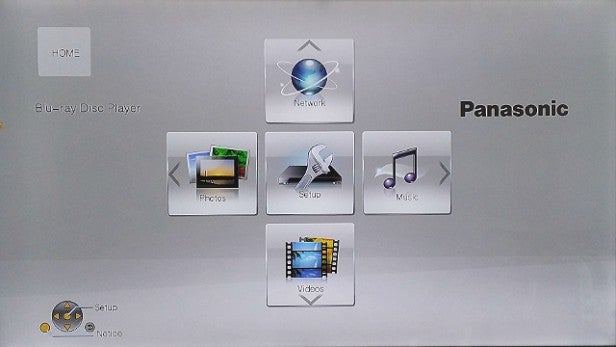 With Ultra HD Blu-ray players just around the corner, I can see why Panasonic hasn’t bothered to update it – but it remains one of Panasonic’s big weaknesses.

The full Setup menu offers all the tweaking options you could need, but for quick access to key settings hit the Option button during playback. An attractive menu pops up over the picture. You can access picture settings, including Normal, Soft and Fine presets and a User mode with brightness, contrast, colour and sharpness adjustments. It also lets you check out disc information, subtitles, audio tracks and 3D settings.

The deck is quick to boot up too, with a Quick Start mode that fires up in under a second – although it eats up more power in standby. It doesn’t take long to boot up without Quick Start activated though, so you’re laughing either way.

I stuck a few different discs in the Panasonic to check how long it takes to load them from an open tray. Terminator Salvation started playing in around 28 seconds, while Thor and Exodus: Gods and Kings took around 20 seconds.

Watching Exodus: Gods and Kings on the DMP-BDT270 is an eye-popping experience. It does a terrific job with the film’s epic visuals, making dusty desert landscapes and aerial shots of Egyptian cities look punchy and three-dimensional – despite being a 2D disc.

Every frame is packed full of fine details, such as the markings and grainy texture of the pillars in Pharaoh Seti’s palace, and the pockmarks on Ben Kingsley’s tanned face. The benefits of using the deck’s 4K upscaling over my 55-inch Samsung TV’s built-in conversion are negligible, but I can certainly say that, when engaged, the deck’s 4K images look stunning.

The movie’s scorched colour palette looks utterly convincing, with skin tones appearing particularly natural. Shading is smooth and subtly blended, and blacks are solid. Even dark, night-time scenes inside Ramses’ palace fail to trip up the Panasonic, with lots of shadow detail punching through the gloom.

Should I buy the Panasonic DMP-BDT270?

The DMP-BDT270 is a likeable Blu-ray player, bringing you alluring features such as 4K upscaling, Miracast, DLNA streaming and internet apps for an affordable price. It looks nice, the menu system is easy to use and its picture quality is superb.

However, the lack of catch-up TV apps found on rival players and a cumbersome internet menu take the shine off an otherwise impressive deck. Plus, the fact that you can currently buy the step-up DMP-BDT370 for a cheaper price makes the BDT270 even harder to recommend.

The DMP-BDT270 is a decent 4K-upscaling Blu-ray deck. However, there are better players – such as the Sony BDP-S5500 – available for the money.