We’ve already cast our eye over the Panasonic DMP-BDT320 and DMP-BDT220 Blu-ray players, so it’s only right that we complete the trilogy with the Panasonic DMP-BDT120, the entry-level 3D model in the range. Naturally it’s not as well-specced as the two step-up models above but still comes equipped with enough features to make its £140 price tag look like a good deal.

The design is pretty much identical to that of the DMP-BDT220, housed in 38mm high all-black bodywork with a silver stripe running along the top edge of the fascia. It’s not as pretty as the DMP-BDT320, lacking its disc slot and sloping sides, yet it’s still an attractive player and a sympathetic match for Panasonic’s latest range of Viera TVs.

Connectivity
Underneath the front flap is the disc tray, a couple of buttons, an SD card slot and a USB port – great to see Panasonic not skimping on front terminals at this lower price. Although not up to the super-rigid standards of the flagship DMP-BDT500 (review to follow soon), the BDT120 has a solid feel that won’t leave you feeling short-changed.

The rear panel offers the same sockets as the BDT220, including a 3D-capable HDMI output, optical digital and analogue stereo outputs, composite video output and an Ethernet port for making a wired connection to an internet router. There’s a second USB port too, which is designed to work with Panasonic’s optical accessories – the TY-CC10W Skype communication camera and the DY-WL5 Wi-Fi adapter.

Going wireless
The Panasonic DMP-BDT120 lacks built in Wi-Fi, which is the only difference between it and the BDT220. That means you’ll need to fork out for the DY-WL10 dongle (below) to go wireless with its alluring range of network and internet features, which will set you back around £80. But we find it hard to understand why anyone would rather buy this deck and a dongle for around £220 when the Wi-Fi equipped DMP-BDT220 only costs £180 and the DMP-BDT320 costs £230. 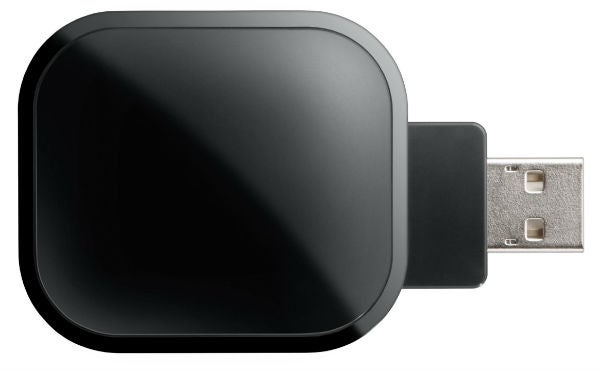 It also causes a minor dilemma if you want to use Skype. The feature will only work with the LAN adapter connected, which takes up the rear USB port. That means you have to connect the camera to the front USB port, so there’ll be some chopping and changing every time you want to play media from a USB flash device. Not a great hardship perhaps, but another little niggle that may push you towards the BDT220.

Smart TV – Viera Connect
But, if you invest in the Wi-Fi dongle, you’re in for a treat. First up you can explore Viera Connect, Panasonic’s internet content portal. This version is new to the company’s Blu-ray players this year, but it’s basically the same as Viera Cast with a better choice of content and a Market where you can add any new third-party apps that become available. 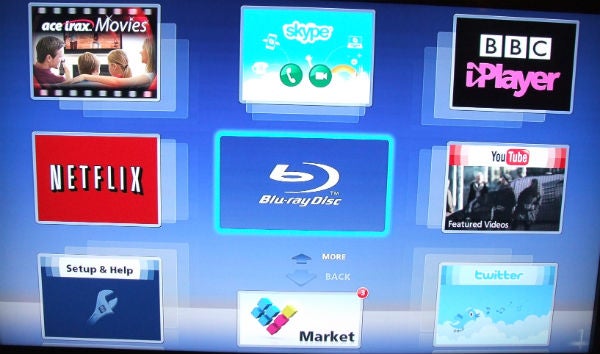 The selection is decent enough, with highlights including BBC iPlayer, Netflix, Acetrax, YouTube, Facebook, Twitter and of course Skype, but you’ll still find a better range of services on Sony and Samsung’s Blu-ray players. The Viera Connect interface is a tad clunky with its various pages of apps, but we’re being picky here – it’s a fun feature that adds plenty of value to the overall package.

Media playback
And just like its more expensive siblings, the Panasonic DMP-BDT120 is DLNA certified and can stream media content from PCs, smartphones and Panasonic recorders on a home network. You can also pull content onto your smartphone from PCs, using the DMP-BDT120 as a renderer. The deck supports MP3, WMA, FLAC, DivX, MKV, WAV, JPEG and MPO and you can play these from USB flash devices too. AVCHD, MP4, MPEG-2, JPEG and MPO can be played from SD cards.

The BDT120 even lets you pull content from non-DLNA devices using the Network Drive feature, and when doing so it supports an even wider range of formats. The network-related goodies continue with the 2012 iPad remote app, which went live in the last couple of weeks and provides a nice modern way of controlling the player in place of the regular remote. The app is packed with options, including support for Gesture, a menu graphic that apes the look of the real remote and a key pad that makes it a breeze to fill out onscreen dialogue boxes.

Away from all the snazzy network stuff, the DMP-BDT120 is a high-spec Blu-ray player, despite its entry-level billing. As well as spinning 3D platters it converts 2D discs to 3D and decodes HD audio formats. DVDs can be upscaled to 1080p too.

Interface
Using the DMP-BDT120 is a joy. Right from the off it helps you out with a step-by-step guide for all the basic settings, and then launches into the fantastic menu system, which takes intuitiveness to a whole new level. Icons are arranged into a cross that corresponds with the multi-direction pad on the remote, and a single press in the right direction takes you to that option – the OK key is virtually redundant. What’s more it’s incredibly attractive to look at with its crisp full-colour graphics.

Apart from the Viera Connect interface, which all of the menus share this straightforward, user-friendly ethos. One particularly neat feature is the Multi-User Mode, which allows different people to customise wallpaper and icons to their taste, and if you have the camera connected there’s a facial recognition mode. Superfluous but clever stuff.

The remote is the same one supplied with last year’s players and not the new-fangled touch pad version that comes with the DMP-BDT320. It’s easy to use, with a thoughtful button layout and foolproof labelling. A row of keys on the right gives direct access to Skype, PIP, Viera Connect and the 3D settings, while the disc playback keys are highlighted in blue.

Performance and picture quality
The Panasonic DMP-BDT120 is as quick to load discs as its BDT-series stablemates, firing up Terminator Salvation in 41 seconds and Thor in half the time. That’s great news, as you get to revel in the deck’s delicious pictures as quickly as possible. With the 2D Rise of the Planet of the Apes, images are staggeringly detailed, rendering the impressive ape CG with pleasing clarity, but not neglecting the finer details of the human faces on show.

It also reproduces tricky colours in a life-like manner, subtly teasing out the layers of shading around cheek bones and on clothing with no banding or bleeding. Edges are razor sharp and shadow detail, such as folds and creases on black suit jackets, is clear as day. The 1080/24p output ensures judder free movement when used with a compatible TV.

With the more demanding Silicon Optix HQV disc the DMP-BDT120 delivers an assured performance, reproducing the Video Resolution, Jaggies and Film Resolution tests with only some minor flicker on the latter to report. Tricky camera movements over detail don’t faze the deck in the slightest, likewise the array of exotic video cadences thrown its way.

The DMP-BDT120 is also a fine purveyor of 3D pictures. Once again Avatar found its way into the disc slot and while viewing the First Sortie chapter the image quality hit us for six, with amazing depth and clarity that draws you deep into the action. As the helicopter touches down in the forest the experience is mesmerising – the layers of tree trunks, branches and sunlight streaming in through the gaps seem to stretch back for miles, with skipping animals and flapping ferns crisply resolved in the foreground.

And even without the advanced audio modes found in the DMP-BDT320 (High Clarity Sound, Digital Tube Sound) the BDT120 still plays music with a well-balanced and open feel.

Verdict
There’s absolutely no question that the DMP-BDT120 is a top quality Blu-ray player. Its 2D and 3D pictures look stunning, there’s a bevy of useful features on board including Viera Connect and DLNA networking, and its operating system is one of the best we’ve seen on any Blu-ray player.

The only issue is that you need to buy the optional dongle to access the deck’s web features wirelessly, which is pointless when the step-up DMP-BDT220 with built-in Wi-Fi sells for around the same price. Therefore the only people likely to be interested are those with wired web routers who don’t want to pay a premium for Wi-Fi, or those with no real interest in online features at present. If that’s you, then enjoy your new DMP-BDT120. Everyone else should head straight for the superior DMP-BDT220 or DMP-BDT320.