3D technology is dividing home cinema fans into two camps – those who think it’s the best thing since sliced silicon and those who see it as nothing more than an expensive gimmick. But whatever your opinion, 3D is where it’s at and Panasonic is doing its utmost to make it a success. The company’s five-strong range of 3D plasmas and DMP-BDT300 Blu-ray player have gone down a storm with the critics (including us), and now Panasonic has expanded its 3D range with a new deck, the DMP-BDT100.

It’s a pared-down, cheaper version of the DMP-BDT300, designed to bring Panasonic’s patented brand of 3D Blu-ray playback to a wider audience. Inevitably, it lacks several of the BDT300’s frills, but if this version can retain decent performance and features at a lower price point it might be worth making a few sacrifices for.


The DMP-BDT100 looks like any of Panasonic’s regular Blu-ray players, aside from the big ‘3D Full HD’ logo slapped on the fascia. We wouldn’t call it eye candy as such, but its smart, sleek black finish and glinting silver stripe through the middle is a good look. It’s less showy and slightly slimmer than the DMP-BDT300, and unlike its bigger brother sibling the fascia isn’t completely covered by a flap – only the bottom half drops down, uncovering a USB port, SD card slot and a couple of buttons. 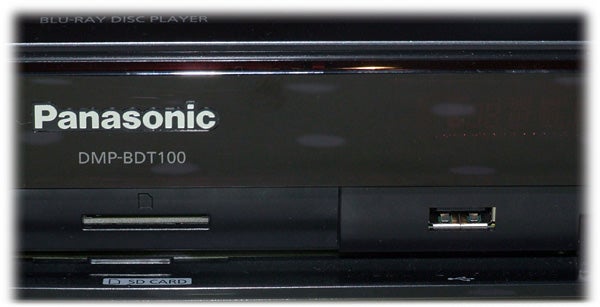 On the rear panel Panasonic has made the sort of cutbacks George Osborne would be proud of. There’s a single HDMI v1.4 output, as opposed to the twin outputs found on the DMP-BDT300, which means you can’t pipe 3D pictures to your TV and HD audio to a receiver independently. Anyone who wants to enjoy Dolby TrueHD or DTS HD Master Audio soundtracks alongside 3D pictures will need to upgrade to a HDMI v1.4 AV receiver (if you haven’t done so already).


Other sockets found on the DMP-BDT300 but missing here include a coaxial digital output, 7.1-channel analogue outputs and a second USB port – the last one is particularly problematic if you want to connect Panasonic’s optional wireless LAN adapter (the £80 DY-WL10). With this device hogging the front USB port, there’s nowhere to connect a USB storage device for digital media playback. What’s more, connecting the USB dongle to the front looks rather ungainly.

Completing the socketry line-up are analogue and optical digital audio outputs, component and composite video outputs and an Ethernet port. Connect to your router using Ethernet or the USB dongle and you can access a range of networking features. As ever, this includes the Viera Cast web portal, which currently comprises YouTube, Dailymotion, Bloomberg and Picasa, as well as Bild.de, Q Tom and Tagesschau for our German friends.


Although the range of content isn’t as broad as Sony’s Bravia Internet Video or Samsung’s Internet@TV portals, at least Panasonic is slowly adding content to the line-up, and in any case YouTube alone could be enough to keep most people entertained.

The Viera Cast interface is excellent. All of the services are placed in small screens dotted around a central Blu-ray logo, and the cursor moves between them instantly. The YouTube screen lists videos down the left, with a playback box on the right that can be expanded to fill the screen. Searching for clips is easy thanks to the mobile phone style text entry, and using our 802.11n Wi-Fi network, streaming was ultra smooth with no buffering pauses at all.


The DMP-BDT100 is also DLNA-certified and lets you play TV recordings stored on networked Panasonic recorders, but frustratingly you can’t stream music, video or photos from PCs – although it will browse them, which is a bit of a tease.


That means the only way of playing digital media is via disc or USB storage devices supporting FAT12, 16 and 32. Thankfully format support is healthy, and includes DivX Plus HD, MKV, MP3 and JPEG. Additionally, AVCHD and MPEG-2 SD Video can be played from SDHC and SDXC cards. You’ll need to insert an SD card if you want to access BD Live content, as there’s no built-in memory for it.

Like most of Panasonic’s Blu-ray players, the DMP-BDT100 uses PHL Reference Chroma Processor Plus to improve colour accuracy but there’s a newly-tweaked version of P4HD for DVD upscaling. There’s also a small selection of picture adjustments found in the in-playback display, including a bunch of picture presets, user-defined settings and a couple of noise reduction modes. Under Advanced Settings there are three more picture enhancements – Chroma Process, Detail Clarity and Super Resolution.


Despite the inclusion of potentially tricky 3D and networking functionality, the DMP-BDT100 remains a user-friendly deck through and through. The straightforward layout of the setup menu makes everything easy to find – with handy explanations given for some options – while the main Functions menu is clear and welcoming with subtly deployed icons. Step-by-step guides take you through network setup in plain English and the menu software is slick and responsive. 3D options include a choice of Full HD or side-by-side output.


Adding to the innate sense of user-friendliness is the top-notch remote, which uses the big, chunky buttons, intuitive layout and shouty lettering found on Panasonic’s previous remotes. Dedicated buttons are provided for Viera Cast, picture-in-picture and audio Re-Master modes, while the Option button calls up a handy menu of frequently used functions.


Panasonic kindly loaned us its 65in TX-P65VT20 plasma to check out the DMP-BDT100’s 3D image quality, and after settling down in front of ”Coraline” with a pair of TY-EW3D10 glasses perched precariously on our face, we were treated to some seriously deep, absorbing 3D pictures – made all the more spectacular by the massive screen size.

As John noted in his review of TX-P50VT20, the first thing that strikes us when watching Panasonic’s 3D system in action is how little crosstalk there is in backgrounds compared with Samsung’s BD-C6900 3D player/LED TV combo. The image seems more stable and well-defined, making onscreen activity much easier to follow and therefore more relaxing for the eyes. Objects in the foreground are still a little difficult for the brain to digest but don’t look as blurry as they do on Samsung’s system.


The DMP-BDT100 makes ”Coraline’s” beautiful opening titles look utterly captivating. Everything from the doll maker’s needle jutting towards the camera to the falling cotton wool looks really convincing. Text sits forward from the background and perspectives shift with remarkable stability. And from then on, the film’s sumptuously detailed sets and weird, wonderful animated characters are rendered with mesmerising depth and layering, making us scan every inch of the image to fully appreciate the 3D effect. It’s a real feast for the eyes.

But it’s not just the 3D that holds your attention – it’s also the ferociously sharp detail reproduction that picks out every fibre of the doll in ”Coraline’s” opening scenes, as well as the punchy, noise-free blacks and natural, nuanced colour reproduction. What’s more, the combination of the deck’s 1080/24p output and the TV’s flawless motion processing keeps moving objects looking smooth, even when the 3D processing is doing its thing.


We switched over to Panasonic’s 3D demo disc, which contains a segment called Rome The Eternal City. The DMP-BDT100’s reproduction of this showcase clip is impressive, rendering the panoramic shots of the city’s rooftops and coliseum with the same wow factor as the DMP-BDT300. Shots of the juggler throwing balls up towards the camera drew the most ‘oohs’ and ‘aahs’ from visiting viewers.


The main criticism of the 3D picture is that picture brightness is greatly reduced when viewed through the glasses. This has an impact on shadow detail and contrast, and we had to find a picture setting for 3D material that upped the brightness without losing black depth. This isn’t the fault of the player per se and not a deal-breaker, but it is something to bear in mind. Samsung’s 3D player and LED TV produce much brighter pictures through their glasses.


Of course, the DMP-BDT100 isn’t just about 3D pictures – its performance with 2D discs is also stunning. ”The Dark Knight” on Blu-ray is handled with outstanding colour reproduction, cinematic solidity and subtlety, not to mention razor-sharp detail rendering. It also laps up the Silicon Optix HQV test disc, reproducing the jaggies tests without a single trace of stepping and keeping artefacts at bay during the Film/Video Resolution Loss tests.


This top-drawer picture performance is backed up by striking sound quality, both with Blu-ray soundtracks and CDs. Music played through the analogue outputs isn’t quite audiophile standard but sounds crisp and open, plus the Re-Master mode makes subtle improvements to high-frequency fidelity. The HDMI Jitter Purifier aims to clean up the digital signal when playing music through this connection.


If you’re already sold on the idea of 3D and have bought (or plan to buy) a 3D-ready TV, then it makes perfect sense to stick the DMP-BDT100 on your shortlist, particularly at this more affordable price point. Its 3D performance in tandem with a Panasonic plasma is fantastic, thanks to its entrancing depth and detail, plus it’s no slouch with 2D material. It’s just a shame that Panasonic couldn’t chuck proper DLNA networking into the mix and bulk out Viera Cast a bit , as these shortcomings make Sony, LG and Samsung’s 3D decks feel like better value for money. Other than that though, the DMP-BDT100 is an impressive Blu-ray proposition.