The Panasonic DMP-BD60‘s tantalising blend of eye-popping pictures, slick Blu-ray functionality and killer features sent it soaring to the top of the hi-def player premiership, but now we turn our attention to the step-up version, the Panasonic DMP-BD80.


As the company’s current top-end machine, it features the most comprehensive line-up of features ever seen on a Panasonic player, which is really saying something given how generously equipped its predecessors were. Stealing the headlines once again is Viera Cast, which uses the player’s Ethernet web connection to stream videos and photos to your screen, using the built-in YouTube and Google Picasa portals.

But what does that £100 premium over the DMP-BD60 get you? For starters, the DMP-BD80 adds 7.1-channel analogue audio outputs, which will appeal to owners of older amps who want to savour the hi-res delights of Dolby TrueHD and DTS HD Master Audio. The unit decodes these formats into uncompressed PCM without compromising their sound quality, and outputs them as analogue signals from these ports. The BD80 also features superior audio circuitry to the BD60.


Another additional feature is a playback information window that can be called up while watching a movie, displaying all the details of the current disc. The information includes the native resolution and frame rate of the source content, the HDMI output format, the video/audio codecs and bitrates used, plus the current HDMI audio settings. It’s all very interesting and a useful tool for video anoraks, but we don’t think this or the analogue outputs offer a compelling reason to stump up an extra £100.

We also expected the Panasonic DMP-BD80 to offer superior build quality to the DMP-BD60, but apart from being 5mm taller this version appears to be identical. It lacks the rock-solid build quality of the latest Pioneer players, but the BD80 is still robustly constructed and attractive – the reflective fascia and black finish is a fetching combination and the digits inside the display panel are easy to read. It’s nowhere near as snazzy as the latest Samsung and LG decks but then again few players are.


Like the BD60, the BD80 sports USB and SD card slots on the front that can be used to play back digital media, and because the deck is BD Live capable you’ll need to insert an SD card with a capacity of at least 1GB to store web downloads. Lining up alongside the HDMI and multichannel analogue outputs on the rear are component, composite, stereo audio and optical/coaxial digital audio outputs, plus an Ethernet port. Sadly Panasonic hasn’t yet embraced Wi-Fi or built-in memory like the Samsung BD-P4600, which would have made the DMP-BD80 an even more tempting proposition. But there are plenty of other features to make up for it, the most significant of which are in the picture processing department.

The Panasonic DMP-BD80 is equipped with a range of enhancements developed in conjunction with Panasonic Hollywood Labs – who knows a thing or two about what makes a good movie picture – that have already proved a huge success on the Panasonic DMP-BD60. Chief among these are P4HD and PHL Reference Chroma Processor Plus, which are designed to enhance all the core picture elements such as colour, contrast and detail, while P4HD also handles the bread and butter video duties like upscaling, 3:2/2:2 cadence detection and diagonal processing. It’s all made possible by the UniPhier single-chip solution that also allows the DMP-BD80 to consume less power than previous models.

The deck’s audio processing credentials are pretty spotless too, as it can decode Dolby TrueHD, DTS HD Master Audio, Dolby Digital Plus and DTS HD and output any of them as a bitstream or uncompressed PCM via HDMI. And in terms of multimedia support, the DMP-BD80 behaves just like your average DVD player – it handles DivX, MP3 and JPEG from DVD, CD and USB, while via SD card you can play AVCHD, MPEG-2 and JPEG files.


Then of course there’s Viera Cast, which will be dismissed as a mere gimmick by some but if you’re a YouTube regular then there’s a lot of fun to be had accessing clips on your living room TV. The biggest problem we have with the feature is that you can only watch HD clips in low-res quality, which is no doubt a bandwidth issue but still feels a bit strange on a player with such impeccable hi-def credentials elsewhere. When blown up to full screen the clips are watchable but laden with noise. 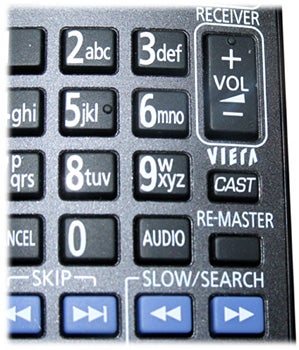 However, Viera Cast is simple to use thanks to its well-laid out and responsive onscreen design. On YouTube, videos are grouped into the same categories as the actual website, and lets you search for content using a virtual keyboard. The Picasa portal is similarly well designed, and the service lets you view images in high resolution. Although the current Viera Cast content is limited and the lack of movie streaming is a pity, we’re sure the feature’s worth will increase when more sites are added. 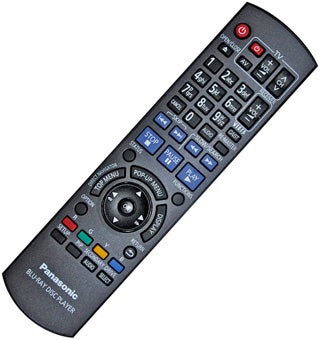 As we established with the DMP-BD60, the latest Panasonic players takes a lot longer to load a Blu-ray disc than the Samsung BD-P4600 and LG BD370, but at least the Quick Start mode powers it up swiftly. The Panasonic DMP-BD80 is also a joy to use, boasting an admirably straightforward and good-looking setup menu, which presents potentially complicated options with total simplicity, and a remote that my four-year-old son had no problem using. Our only gripe is the player’s need to reset the HDMI connection before playing a disc or accessing the setup menu, which brings up a black screen for a few seconds.

There’s certainly nothing wrong with the DMP-BD80’s picture talents, however, which makes our usual range of test discs look absolutely sensational. For instance, it handles the intricate detail of the superb 1080/24p transfer of ”Hellboy II” as though every single pixel were sacred, giving the image greater sharpness and lucidity than many of its rivals. It easily picks out fine detail that inferior players struggle to convey, such as the tiny indentations on Hellboy and Abe’s prosthetic make-up or the textured grass and rocks at Giant’s Causeway. Edge definition is also superb, particularly with diagonal lines, which makes the picture appear clean and focused throughout.

The strength of these pictures is also boosted by the excellent colour purity and sensitive handling of skin tones, plus solid blacks and an expansive contrast range lend the image plenty of punch and vibrancy. Our findings are backed up by the player’s near faultless handling of the HQV disc – it effortlessly suppresses jaggies and picks up the correct video and film cadences without batting an eyelid. It also delivers superb results with 1080p DVD playback, interpolating those pixels without introducing unwanted artefacts.


Its picture talents are matched by its admirable audio prowess. Externally-decoded TrueHD and Master Audio tracks naturally sound great, but the Panasonic DMP-BD80 also does a fantastic job of decoding them itself. We hooked up the analogue outputs to our AV amp and ”Hellboy II’s” DTS HD Master Audio track shares the same dynamism, detail and clean separation as the HDMI-delivered signal, while its analogue CD playback is open and distinct.


With its impressive feature set and fine picture performance, the Panasonic DMP-BD80 is undeniably one of the best Blu-ray players on the market, and although its full potential hasn’t yet been realised, the addition of Viera Cast once again demonstrates Panasonic’s desire to push Blu-ray technology forward into its Internet-enabled future.


But despite this, we do have to question why such a hefty premium was added for extra features that don’t add a great deal to the user experience. The playback window is nice but hardly essential, and the audio improvements aren’t significant enough to justify the cost. So unless 7.1-channel analogue outputs are absolutely imperative, you’re better off saving yourself £100 and opting for the Panasonic DMP-BD60.