Panasonic recently unveiled its 2011 product line-up at Excel in London and among the hordes of brand spanking new home cinema products on show were three 3D-ready Blu-ray players – the DMP-BDT310, DMP-BDT210, DMP-BDT110 – and two 2D players, the DMP-BDT111 and DMP-BD75. We’ve managed to get our hands on the Profile 2.0 BD75, which may only be this year’s no-frills, entry-level offering but it still reveals some of the big improvements Panasonic has made across the entire range.


The first of these is the external design. With the environment very much at the forefront of its mind, Panasonic has squeezed the DMP-BD75 and its stable mates into much slimmer and compact cases (the BD75 measures just 35mm high), which in turn means less packaging. There is another benefit, though; it’s easier to slide into tightly packed AV cabinets.

Compact it may be, but that doesn’t leave much surface area to play with – as a result, there are just a couple of buttons on the front panel, next to a basic LED display panel and a USB port. The deck is basically a simple, wafer-thin black box, but despite its lack of bells and whistles (such as the Touch-Free Sensor found on decks higher up the range) it retains a sense of style, plus the aluminium casing makes it surprising robust for a budget player.


On the rear panel is more evidence of the DMP-BD75’s budget status. The sockets on offer include an HDMI output, composite video output, stereo audio output and an Ethernet port – this is clearly a deck aimed at buyers with basic requirements. If you want to enjoy HD audio soundtracks you’ll need to pair it with an HDMI-equipped receiver, as there are no multichannel analogue or digital audio workarounds.


The USB port on the front panel is provided for playback of digital media files, but the lack of built-in memory or separate SD card slot means this has to be used for storage if you’re planning to download BD Live content. Unsurprisingly the port doesn’t support Wi-Fi dongles and there’s no built-in Wi-Fi either.

So what does it offer features-wise? Not loads, but more than you might expect at this price. The most appealing feature is ‘Media Server’ DLNA networking, which allows you to stream music, video and photos from Windows 7 PCs on your home network, or you can access recordings stored on a Panasonic DIGA recorder from this player in another room. The Ethernet-only connection method makes it more cumbersome to set up than it could be, but once connected the feature works well and the BD75 makes it easy to find content.

That USB port lets you play a decent array of file formats from flash drives and external FAT32 HDDs, most significantly MKV and DivX HD but also MP3 and JPEG. It refused our AAC, WMA and WMV files though, so if your library contains a lot of those then perhaps look to Samsung or LG. 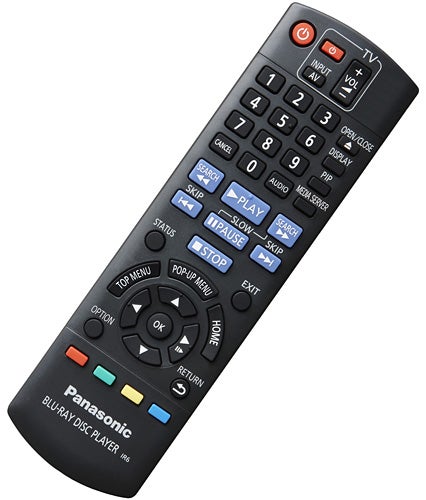 It may be light on flashy tricks but Panasonic’s newly revamped onscreen interface is like a feature in itself. The company has clearly worked hard to improve the user-friendliness of the new players and it’s really paid dividends. The new ‘Home’ menu now resembles a cross (sound familiar?), and a simple tap of a direction key or enter takes you straight to the required menu. There’s no wading through pages of submenus or entering a separate menu just to access Setup like on last year’s decks. Each arm of the cross contains a different icon, and the whole thing is decorated in bright, fluffy colours that help make operation an effortless experience. The Setup menu uses the same list layout as before, but Panasonic has jazzed up its appearance with some new fonts.


The remote stays the same however, which is a good decision as we’ve always liked Panasonic’s use of large chunky keys and clear, plain-English labelling. There’s a dedicated button for the Media Server feature and the menu controls are as intuitively placed as ever.

Another aspect Panasonic has worked hard to improve upon is disc-loading speed, and the results of this were evident when we loaded up ”Terminator Salvation”. It chops the DMP-BD85’s sluggish time of one minute 22 seconds down to 40 seconds, with other discs like ”Avatar” taking only 30 seconds to load. OK, so it’s not lightning quick but we’re nudging ever closer to those hallowed DVD loading times.


And in terms of picture quality, the DMP-BD75 is a great advert for budget Blu-ray players, mustering images that certainly don’t look like they’ve been compromised by corner cutting. It appears to retrieve every last scrap of detail from the disc and displays it without any errors or artefacts. The image is as clear and crisp as we’d hope, with a really canny ability to render rich, radiant colours without losing its way with shading and tonal blends, which look wonderfully smooth.

Of course, discs like ”Avatar” are the best way to show off the BD75’s expertise. The Na’vi’s blue skin and their kaleidoscopic forest surroundings enjoy wonderful vibrancy and never look dull or garish. Textures like skin and tiny details on the forest floor during Jake’s first sojourn are easily visible. We also tried out more ‘realistic’ looking discs like ”Inception” and ”The Dark Knight”, and the images on show are deep and solid, exactly what true movie lovers are looking for. It also pulls it out of the bag with DVD discs, delivering clean, watchable pictures that might just save your SD discs the ignominy of the car boot sale for a little longer.


But for a more objective insight into the deck’s video processing chops, try an evaluation disc like Silicon Optix’s HQV. The DMP-BD75 passes its stern tests with flying colours, making the Film and Video Resolution loss tests look completely stable, rendering diagonals without any stepping whatsoever and handling the stadium camera pan with the suave assurance of a more expensive player.


Sonically the player is unremarkable, handling CDs and compressed music through the analogue outs with a lively and generally well-balanced sound without ever doing anything to prick up the ears of any audiophiles in the vicinity.


If you honestly don’t have the funds to plough into one of Panasonic’s forthcoming higher-end players, or you’re simply not bothered about 3D or any of the other bells and whistles finding their way onto many players in the budget-to-midrange market, then the Panasonic might be worth investigating by virtue of its wonderful picture quality and excellent new operating system – plus you get DLNA networking functionality as a tasty little bonus.


However, anyone looking for an exciting, sexy, multifaceted and media savvy Blu-ray player with Web access, 3D support and Wi-Fi functionality might do well to seek out a discounted Sony BDP-S570 or keep saving and wait to see what Panasonic’s better-specced players have to offer.