It’s no secret that for a long time I considered HD DVD to be the better high definition format. The reason for that belief was that two years ago, when HD DVD and Blu-ray both launched, the former actually provided all the features that the next generation formats had promised, while the latter did not. Even the earliest HD DVD players offered features like an Ethernet port, dual decoders for picture-in-picture, downloadable firmware updates, persistent storage for downloadable content and the ability to access online features, none of which were available on early Blu-ray players. But as Bob Dylan said, the times they are a changin’.

It may have taken a little while, but Blu-ray players have now caught up to where HD DVD was two years ago. The so called “final profile” for Blu-ray players brought with it mandatory dual decoders and Ethernet connectivity, but recently there has been an update to the Final Profile – am I the only one the sees that as something of a misnomer? Anyway, semantics aside, the latest Blu-ray profile takes the format to where it always promised to be, by finally adding BD Live!


The DMP-BD50 is the latest Blu-ray player from Panasonic, and the first to feature the full complement of features that the format always promised it would have. So, for the first time you can buy a stand alone Blu-ray player, safe in the knowledge that it won’t be out of date in a few months. And that will instantly make it pretty damn attractive to consumers, especially consumers who have been too scared to invest in a new high definition optical format, for fear of making the wrong decision or buying something that lacks the full feature set. 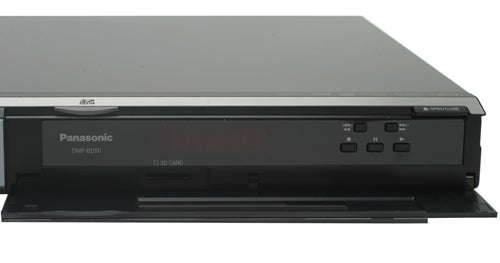 Just like Panasonic’s latest generation of Viera TVs, the DMP-BD50 looks very sleek and stylish. The gloss black fascia is split into two halves, with the left half hiding the disc tray and the right side incorporating the display and a fold down flap behind which lies playback controls and an SD card slot – more about the latter later.


At the centre of the top edge of the fascia is a blue light – obviously any entertainment product has to have a blue light, or at least that’s what the majority of manufacturers would have us believe. In fact this particular blue light is relating to the SD card slot and can be set to only illuminate when a card is inserted. The BD50 is also a very slim player, which belies its high-end aspirations – there was a time when size and weight did dictate quality in AV kit, but not so much these days.

Things are no less impressive at the rear, with a full complement of gold plated analogue AV connectors. There’s component video out, S-Video, composite, left and right analogue audio, and a full set of 6-channel surround sound outputs. You also get both coaxial and optical digital audio connectors for outputting digital bit streams to an external amplifier or decoder. It’s the final two connectors that are the most interesting though. There’s an HDMI 1.3 port, which will obviously be the connection option of choice, providing digital audio and video, for the best possible experience. You’ll also be able to make use of Deep Color software, if any of the studios ever release any. Finally there’s an Ethernet port, one of the major omissions from early Blu-ray players and the key to getting online with the BD50.

When it comes to audio the BD50 covers pretty much all the bases. There’s lossless compression formats in the shape of Dolby TrueHD and DTS-HD Master Audio, along with Dolby Digital Plus and DTS-HD High Resolution Audio. All those codecs can be mixed into a 5.1-channel PCM output.


You can, of course, also output uncompressed PCM audio in up to 7.1-channels – this type of audio is quite common on Blu-ray movies, and the results can be incredibly good. In order to playback these codecs and 7.1-channel PCM audio, you’ll have to connect the BD50 to your amp/processor using HDMI.


The aforementioned SD Card slot brings potentially extensive persistent storage to the party. It’s SDHC compatible, which means that you could plug a 32GB card in there, if you had enough spare cash to buy one. But considering that you can buy a 16GB card for under £30 these days, you’re going to be able to download a lot of extra content over BD Live – or at least you will be able to when more discs support the service.

Talking of BD Live, disc support is pretty thin on the ground at the moment, but there is a lot of content scheduled for release in the coming months. In fact, Disney will be launching some of its classics on Blu-ray, complete with BD Live features soon, how many of these features you’ll want to use is debatable though. Stuff like blogging to a website for the disc or instant messaging friends while watching a film have limited appeal if you ask me, not least because you’ll be writing said text using the remote control!


The other great thing about the SD Card slot, is that it works beautifully with the latest generation of SD based AVCHD high definition camcorders. So, if you happen to be shooting with something like the Panasonic HDC-SD9, you could simply eject your SD card, slap it into the BD50 and watch your home movies in glorious Full HD.

If you happen to be using the BD50 in conjunction with a Panasonic TV, you’ll be able to make use of the Viera Link functionality. This will allow you to control both devices from a single remote, and turn all devices on/off simultaneously. Of course Viera Link incorporates the CEC specification, so it should work with non-Panasonic CEC equipped products, but like many other manufacturers, Panasonic maintains that Viera Link potentially offers more functionality than basic CEC.


For a long while I’ve been advising people considering a Blu-ray player to go for a PlayStation 3. The reason for this is that up until recently, the PS3 was the most advanced and feature rich Blu-ray player on the market, while also being something of a bargain compared to stand alone players. But with the BD50, Panasonic has finally created a player that not only matches the PS3 for Blu-ray features, but beats it in the image quality stakes.


The key to the superb pictures produced by the BD50 is Panasonic’s UniPhier chip. Last October I found myself at the CEATEC show in Tokyo, where Panasonic launched its UniPhier chip, and it was clear even then that this tiny piece of silicon was a landmark in the company’s R&D. Based on a 45nm manufacturing process, the UniPhier is pretty advanced, even by CPU standards. The result is that the video processing in the BD50 is noticeably better than other Blu-ray players I’ve used, including the PlayStation 3. 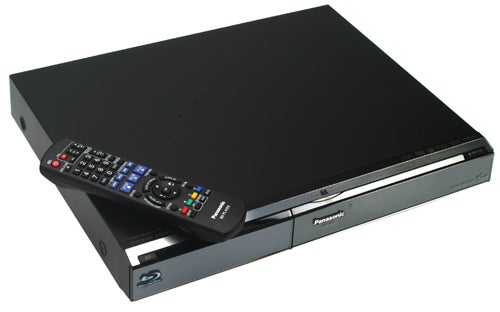 
To really put the DMP-BD50 through its paces, I hooked it up to my Pioneer PDP-LX5090 – this screen uses Pioneer’s 9th generation plasma technology, and represents the second generation of its Kuro brand (there will be a full review very soon). Watching Blood Diamond, the BD50 just created a more immersive picture than my PS3 – everything is just that bit sharper, while the image itself has more depth and realism to it. Casino Royale looked equally impressive, with the fast moving free running scene showing no signs of processing artefacts – even the panning shots of the cranes failed to throw up unwanted jaggies. Obviously I was outputting the movie as a 1080p 24Hz signal, and had the TV set to 1:1 pixel mapping.


And that’s the key to a player like this. If you want to get the very best out of it, you also need to invest in a very good screen. I’m not saying that the BD50 won’t look great on a cheaper TV, because it still produces stunning pictures on Panasonic’s more reasonably priced TH-46PZ80 46in plasma. However, the difference between this player and a lesser model is that bit more stark when it’s hooked up to a truly great screen.

If you’ve got a large DVD collection you won’t be disappointed either, since the upscaling capabilities of the BD50 are also impressive. Obviously, no amount of upscaling is going to make a DVD look as good as an actual high definition source, but the improvement is noticeable. Of course, over here in the UK the player isn’t having to do quite as much as it would in the US, since the 576 line nature of PAL means that it has more resolution to play with.


So is this the perfect Blu-ray player? Not quite. One of the reasons I’m still using my PS3 as my main player is that it’s a Japanese console, and therefore is happy to play pretty much any disc I put in it. The BD50 on the other hand, will only play Region B or multi-region discs, which means you can’t order US movies unless you already know that they’re multi-region. To be fair, this isn’t Panasonic’s fault, and the blame lays firmly at the door of the movie studios, who continue to artificially sectionalise the world. 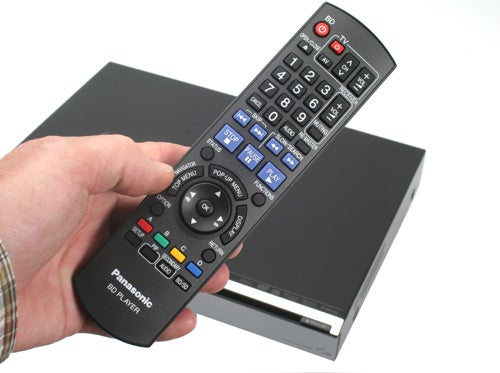 The other main potential negative point comes down to your choice of TV. If you’re not going to invest in a seriously good TV, it’s unlikely that you’ll see much improvement over using a PlayStation 3 as your Blu-ray player – and let’s not forget that the PS3 is cheaper and a high definition games console to boot.


Despite the DMP-BD50 being feature rich and offering superb image quality, it’s not as pricey as I had expected, with it already available online for as little as £377 – a stark contrast to Panasonic’s original DMP-BD10 player, which had a worrying lack of features and a price tag of around £1,000! I appreciate that £377 is still a fair chunk of cash to many people, and the fact that the PS3 can be had for around £250 makes it seem even more steep, but if you’re planning on buying a very good TV, it’s worth investing a bit more in your Blu-ray player too.


It has been a very long time coming, but Panasonic has finally created a Blu-ray player that has all the features that the format promised at launch. If you want to access online content, view picture in picture video, play Java based games or decode the latest audio codecs, the DMP-BD50 can do it all. Add to that, some of the best image processing available in the home, thanks to the UniPhier chip and the software/firmware driving it, and there’s no doubt that this is a very special player.


The DMP-BD50 isn’t cheap, but I don’t think that it’s overly expensive either considering the image quality and features. Ultimately, if you’ve been holding off on buying a Blu-ray player because of the format war, lack of features and high price, your wait is over. Is this the best Blu-ray solution out there right now? I certainly think so.

Riyad Emeran
Riyad Emeran contributed a variety of reviews to Trusted Reviews between 2003 and 2010. …