Panasonic doesn’t hang about when it comes to Blu-ray. It feels like only yesterday that we were lavishing praise on the Profile 1.1-enabled DMP-BD30 and BD-Live compatible DMP-BD50, but the company has already launched their successors, the DMP-BD35 and BD55. These were unveiled at IFA Berlin last month (alongside Europe’s first Blu-ray recorder – finally) and look to offer the same top-quality performance and features as their predecessors but at more affordable prices.


The best news is that the DMP-BD35 goes one better than the BD30 by offering full BD-Live compatibility, supporting the web-based interactive content found on a growing number of Blu-ray discs. With the DMP-BD55 and DMP-BD50 also offering BD-Live support, Panasonic is amassing a formidable arsenal of hi-def decks that can deliver the full Blu-ray experience.

Panasonic has tweaked the design of the DMP-BD30 to create a more streamlined chassis, and its 49mm height makes it the world’s slimmest Blu-ray player. It’s a highly attractive and robustly built machine, styled in black to compliment Panasonic’s Viera TVs and AV receivers. A small flap on the right hand side of the front panel conceals a few buttons and an SD card slot, which plays a crucial role in the player’s BD-Live functionality – you’ll need it to store bonus content downloaded from the Internet, such as trailers, subtitles and BD-J applications. The SD slot also allows you to play JPEG and AVCHD files.


Around the back, you’ll find a surprisingly meagre selection of sockets, headlined of course by the HDMI 1.3 output, which supports all the usual goodies like Deep Colour, x.v.Colour and Viera Link. There’s also an Ethernet port for accessing online content and making firmware updates, plus component and composite video outputs, optical digital out and stereo audio output. 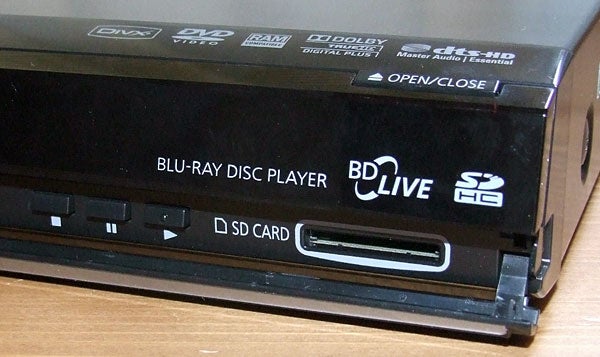 However, the multichannel analogue outputs found on the BD30 are missing, leaving the HDMI output as the only means of listening to HD audio formats – owners of older non-HDMI amps will have to settle for bog standard Dolby Digital and DTS from the optical digital output. Given that the player can internally decode Dolby True HD, Dolby Digital Plus, DTS HD Master Audio and DTS HD, it feels like a missed opportunity, but we won’t come down too hard on Panasonic as it’s a price-driven decision – the pricier BD55 adds 7.1-channel analogue outputs (and a coaxial digital audio output).


The player can pipe Dolby True HD, Dolby Digital Plus, DTS HD Master Audio and DTS HD bitstreams to a compatible AV receiver via HDMI, and this socket can also output these formats as multichannel PCM should your receiver not be able to decode them.

At the heart of the player is Panasonic’s UniPhier chip, which features PHL Reference Chroma Processor Plus, a tweaked version of the technology found on the BD30 and BD50. It uses a 4:4:4 function that colour compensates every single pixel in the picture to create a crisper and more vivid palette.


Meanwhile, Pixel Precision Progressive Processing for HD (P4HD) handles motion detection, diagonal processing, 3:2/2:2 pulldown and upscaling of DVDs to 1080p. Furthermore, the unit can output 1080p Blu-ray pictures from the HDMI port at 24 frames-per-second, which should result in judder-free movement on 24fps-capable displays.

The BD35 is one of the slickest and most user-friendly Blu-ray players we’ve ever tested. Discs load quickly, complex menus are handled with ease and the onscreen menus dart from option to option with Usain Bolt style quickness. The onscreen graphics are also up to Panasonic’s usual high standards, with bright, welcoming colours, large text and intelligently structured submenus.


Delving into some of these displays, we found a useful picture adjustment mode, allowing you to tweak everything from contrast to gamma and noise reduction, as well as select from a variety of presets. There are a few sound effect modes on board too, plus a Dialog Enhancer.


We can’t fault the remote, which matches previous Panasonic efforts with its simple button layout and excellent labelling. It lets you control the deck’s plethora of features with consummate ease, including the BonusView PIP and BD Live features, both of which are smoothly handled.

But when it comes to picture quality, the DMP-BD35 is in a class of its own at this price. Connected to a Toshiba 40ZF355D and set to 1080/24p, the BD35 produces astonishingly good images, the quality of which you’d expect to see from a deck costing twice as much.


The moment we loaded up ”The Assassination of Jesse James…” we couldn’t quite believe the depth, sharpness and vibrancy of the pictures on offer. Devilishly dark blacks give the picture a punchy, cinematic flavour – best demonstrated by Brad Pitt’s waistcoat and trousers, which look truly deep but avoid the ‘black hole’ trap thanks to the sharply resolved shadow detail within.


It resolves an incredible amount of detail elsewhere, making the movie’s captivating photography look as beautiful as the director intended. The player teases out the texture in tree bark, clothing and dusty landscapes with searing clarity, and provides a spot-on colour balance that reproduces muted, stubble-specked skin tones with a natural feel.

The BD35 also performs well with the Silicon Optix Blu-ray HD HQV Benchmark disc, resolving the black and white lines flawlessly in the film and video resolution loss tests, as well as keeping jaggies to a minimum on rotating bars (hats off to P4HD) and resolving the tiny seats in the panning stadium shot with minimal flickering.

We weren’t quite as enamoured by the BD35 as a DVD upscaler though – the opening scenes of ”Seven” look a tad hazy and fidgety (particularly Morgan Freeman’s textured bed sheet) and edges look jagged. Switching to the more recent ”Lord of the Rings” disc, we got more of the same, which is a surprise given Panasonic’s past upscaling accomplishments with this disc.


But it’s all positive on the sound quality front. We paired the BD35 with Panasonic’s SA-BX500 receiver and kicked back with ”Resident Evil: Extinction’s” Dolby True HD soundtrack and were swallowed up by a clear, detailed soundstage that quite frankly took our breath away. Music from the analogue outputs is also distinct and well-balanced.


The DMP-BD35 shows Blu-ray at its very best, not only in terms of picture quality – which is absolutely sensational, by the way – but also in terms of sound, features and all-round usability. DVD playback is a touch disappointing but in all other respects, you’d be hard-pressed to find a better Blu-ray player for this sort of money.