High-definition content looks so good that we can barely leave our house without taking it with us. There are various ways of doing this – iPads, personal media players and laptops – but one of the more unusual ways is a portable Blu-ray player like the Panasonic DMP-B200. These haven’t really taken off in the same way as portable DVD players, probably due to stiffer competition from the HDD-based players listed above, but they do offer a great way of watching your Blu-ray discs on the move with the added bonus that they’ll play your video files too. 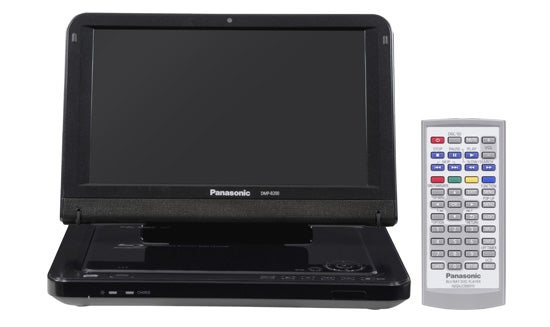 Surprisingly, Panasonic is still the only company making portable Blu-ray players in the UK, and the DMP-B200 is Panasonic’s third-generation model. It sports an 8.9in 16:9 screen with a resolution of 1024 x 600 pixels, and like previous Panasonic portables the ‘Free Style Viewing’ feature allows you to move the screen into a comfortable viewing position. You can flip up the screen from its closed position (like a laptop) and unclip it from the hinge, which then allows you to tilt it or bring it down to rest almost flat on the bottom section, with little wheels letting you to slide it back and forth. This flexibility will in handy in the car, when manoeuvrability is more of a problem. 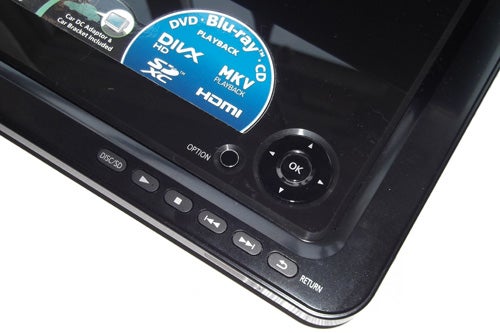 The base section of the player houses the disc tray, which flips up at the touch of a button. In the corner of this are the multi-direction menu controls and an Option button, while there’s a row of playback buttons running along the front rim. The player is styled in a sexy gloss-black finish that’ll no doubt be covered in fingerprints once the kids get their hands on it. It’s fairly heavy for a portable product but compact enough to tuck into your bag. 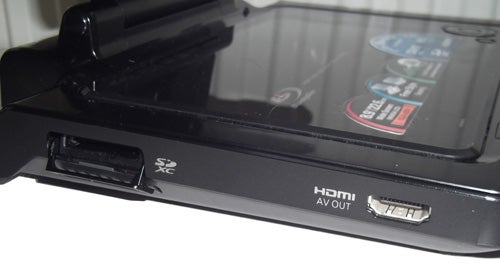 There are just three sockets dotted around the side. Most significantly, there’s an HDMI output, which allows you to watch Blu-ray discs on your hi-def TV. So essentially you can use this as your main player in the home, then simply unplug and take it with you on your travels. You also get an SD card slot, supporting both SDHC and SDXC cards, and a single headphone jack. It’s a shame there’s no USB port, which would have made it easier to enjoy digital media, and there’s no Ethernet port or Wi-Fi for BD Live downloads either, making this a Profile 1.1 player.

The Panasonic DMP-B200 comes with a discreet battery. It slots into the bottom towards the back of the player and provides four hours of playback. For in-car viewing you get a DC adaptor and a bracket, which attaches to the back of the seat. Thankfully it’s not a strap or pouch but a sturdy plastic affair that secures firmly to the player using a screw.

The DMP-B200 doesn’t only play Blu-ray discs. It spins DVDs, recordable DVDs (RAM/-R/-RW/ R/ RW) and CDs, plus it handles DivX HD, MKV, JPEG, AVCHD and MPEG-2 from SD cards and discs. When viewed on a TV the player outputs movies at 1080/24p, and it also outputs Dolby True HD and DTS signals via HDMI if you want to hook it up to your AV receiver.

The DMP-B200 features a great-looking menu system that uses elements of the interface found on Panasonic’s standalone players. The main Function menu uses three large icons offering a choice of SD, Disc and Setup, set against a bright blue background. Access Setup and the great presentation continues, with clear lists of options demonstrating a logical structure.

There’s a separate menu for the LCD screen, which allows you to select from a range of presets, including Standard, Night, Dynamic and User. The User setting then lets you alter the levels of brightness and colour in the picture. Elsewhere there’s a Quick Start mode, only available when plugged into the mains, and a few energy saving settings. If you hit the Options button during playback a small menu appears, providing access to the most-used functions. 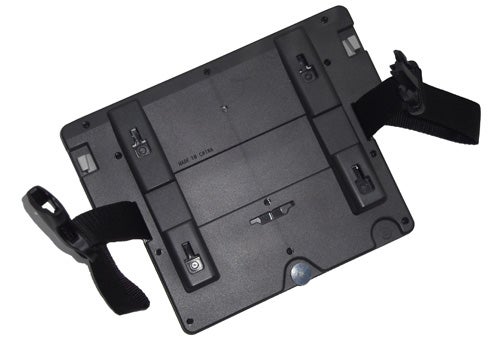 Also in the box is a remote, which comes in useful when watching movies on your TV. Sadly though, it’s too fiddly due to the number of small, identical buttons, unhelpfully lined up in rows. There’s no sense of intuitiveness when using it – every function requires a long look at the zapper to find the button you need. The playback keys are a different colour, which helps a little, but on the whole this is a poor zapper.

With a resolution of 1024 x 600, pictures on the built-in screen aren’t technically hi-def, but there are enough extra pixels to make them look sharper than DVD pictures. In fact images look positively resplendent, offering sumptuous, nuanced colour reproduction, solid blacks and lots of detail. The screen is also nice and bright but with good contrast levels that prevent the picture looking washed out.

With the Wall-E disc, the piles of litter during the opening scenes are crisply resolved, likewise close-up shots of our titular hero’s scuffed, battered bodywork. In fact in every scene the CG looks clean and punchy. Some of this detail looks a little less distinct than it does on a TV, but as portable player screens go this is a superb performance. Also pleasing is that the pixel structure isn’t visible, unlike some portable DVD players, which leaves edges looking smooth and stops the image looking gauzy. The screen also boasts a wide viewing angle. 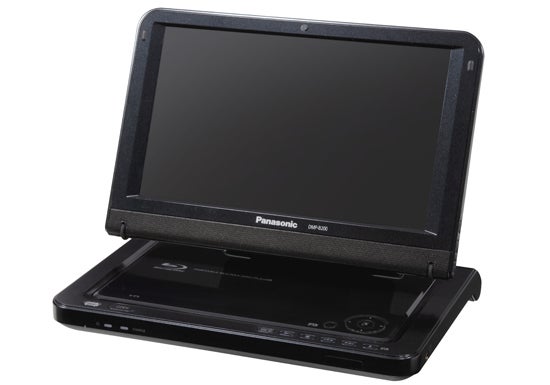 We switched to The Dark Knight to check how that screen holds up with gloomy scenes, and it fares well. Night-time shots of the city skyline are punctuated by bright, piercing white lights, and it’s possible to make out objects moving among the shadows. Indeed, as Batman stands atop the police building, his black costume and the detail within it look clear and visible. One or two dimly-lit shots lose clarity but on the whole it’s a great effort. The full-screen IMAX scenes, particularly the establishing aerial shot of Hong Kong, look stunning.

The picture obviously looks even sharper when viewed on a TV. However, it contains bags of detail and rich, realistic colours, although the images aren’t quite as nuanced as Panasonic’s latest standalone decks.

The built-in speakers are weak, reducing The Dark Knight’s brutal sound design to a series of pops and hisses, but through a pair of headphones or an AV receiver the sound quality is excellent. The player didn’t have any trouble playing any of our test files, and in terms of disc loading it’s very impressive – The Dark Knight took just 21 seconds to start playing.

Verdict
If you’re after a portable Blu-ray player, then you’re not exactly spoilt for choice – Panasonic has cornered the market. It’s a good job then that its players are impressive. The DMP-B200 is a great example, offering sharp, punchy pictures (despite the non-HD screen), a pleasing set of features and a stylish gloss-black design. At £300 it’s rather expensive, but don’t forget that it also doubles as a living room Blu-ray player with its HDMI output. It’s a shame there’s no USB port and its Profile 1.1 spec may deter some buyers, but even without these the DMP-B200 has much to offer.