Panasonic was the first company to launch a portable Blu-ray player with last year’s DMP-B15, an impressive if expensive mobile movie machine. The company has followed it up this year with two new players – the DMP-B100 and DMP-B500. The latter is a ‘photo frame’ style deck with Wi-Fi and sizeable 10.1in screen, but it’s the smaller DMP-B100 we’re looking at here. 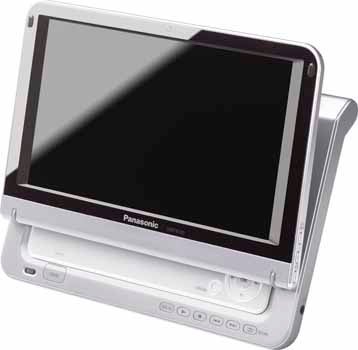 Like its predecessor, the DMP-B100 is fitted with an 8.9in, 1024 x 600-pixel (WSVGA) screen. That’s not much higher than some portable DVD player screens and around half the amount of pixels used in a typical Blu-ray image, but Panasonic still maintains that it delivers much higher image quality.


Resolution aside, the choice of screen size is a good one – it should be big enough to highlight the hi-def picture quality but not too big that you feel like you’re lugging a laptop around with you.


The DMP-B100 is strikingly good-looking. The light silver finish on the outside is fetching enough, but flip open the screen and the white disc flap makes it look even more alluring. Set into this white panel is a cluster of menu controls, while a row of tiny keys are prominently placed along the very front edge of the base.

The screen section is attached to the base with a mono arm that allows you to tilt it or bring it down to rest on the base – something Panasonic calls ‘Free Style Viewing’. You’ll even find little wheels on each corner of the screen to roll it forward and back and find the right angle. It’s a slight shame that you can’t swivel the screen too, but this arrangement makes the unit nice and compact when it’s perched on your lap.


For in-car use, the B100 also comes with a solid plastic headrest, which the player clips onto with minimal hassle. It’s joined in the box by a DC adapter to power it when you’re on the road. The supplied battery attaches to the back of the unit discreetly and hardly adds any bulk at all. Fully charged, you get around 3.5 hours of Blu-ray playback out of it. 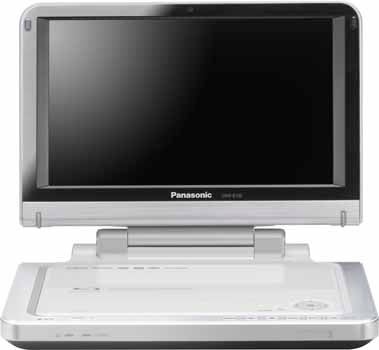 The DMP-B100 sports fewer sockets than the DMP-B15. On the left side, you get an HDMI output for playback on hi-def TVs and an SD card slot, while on the right is a headphone jack. The fact you can use this player on your TV at home means you might not need to fork out for a separate standalone deck, and when watching Blu-ray pictures via HDMI you get the benefits of Panasonic’s PHL Reference Chroma Processor Plus, which aims to deliver the most accurate, nuanced colour reproduction possible. It also outputs in 1080/24p.

However, unlike the B15 there’s no analogue AV output, and because the B100 is a Profile 1.1 player there’s no Ethernet port either. Although BD Live and Wi-Fi can be found on the B500, it would have been nice to find it here too – after all, you might take it on the road to places with Wi-Fi, and it would have been great to watch new online content while you’re out and about. 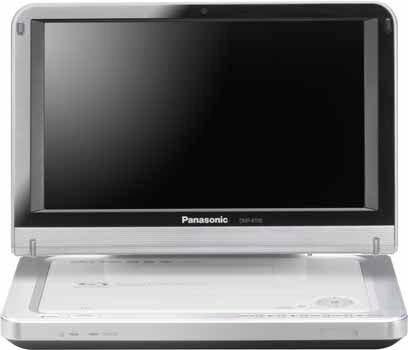 However, there are some other features to keep you occupied. The SD card slot accepts large-capacity SDXC cards and allows you to play AVCHD, JPEG and MPEG-2 video, while DivX HD, MP3, JPEG can be played back from recordable DVD, CD and Blu-ray discs. It can also decode DTS HD, Dolby True HD and Dolby Digital Plus into PCM or output them in bitstream form.


Using the DMP-B100 is blissfully simple. Boot it up for the first time and it runs through the Easy Setting wizard to make the initial settings, then the main menu appears. This shares the design of Panasonic’s standalone players – bright and colourful, with a few cute icons thrown in for good measure. The vertical strip contains Playback, Top Menu and SD Card options, as well as the superfluous ‘To Others’ option at the bottom, which leads to the setup menu.

This tidily laid out menu provides access to a surprisingly long list of options for a portable deck, containing most the stuff found on the DMP-BD45. Obviously the B100’s Profile 1.1 spec means there are no network setup options to worry about, although you do need to tell the player whether you want to turn BonusView secondary audio on or off.


Controlling the B100 with the controls on front of the unit is a joy, but the same can’t be said for the credit-card sized remote. It’s one big bank of homogenous buttons, which means you can’t tell which is which without looking closely, and the important menu direction keys get lost in the crowd. Luckily good labelling stops it from being a complete disaster and some useful buttons provide direct access to frequently used functions. 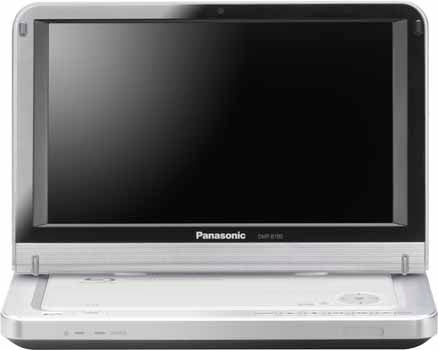 Hit the Options button on the base and up pops a separate menu that lets you zip straight to the disc’s top menu, check its status or visit the LCD setup menu. The latter offers a choice of picture presets and a User mode that lets you set your own levels of brightness and colour. During playback, other options are added, such as pop-up menu, soundtrack selection and aspect ratio mode.

To test the B100’s performance we loaded up The Dark Knight (which only took 18 seconds to start playing) and were generally impressed by the picture quality on offer, although certain scenes convey the ‘hi-def difference’ better than others. 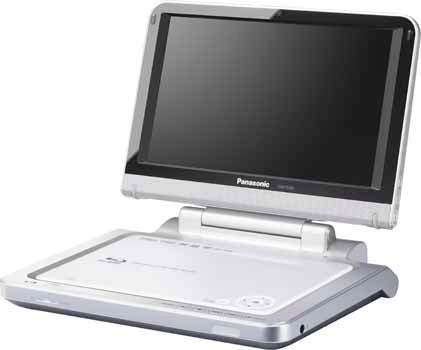 The opening zoom towards the skyscraper is particularly striking – the tiny windows and the detail on the rooftops are crisply rendered, while edges set against bright backgrounds look razor-sharp. And the aerial shot of Hong Kong is absolutely stunning, bursting with detail from every inch of the screen and leaving you in no doubt whatsoever that you’re watching a Blu-ray disc.


The texture and fibres in Scarecrow’s Hessian mask also boast the sort of definition that can only come from a hi-def source. Contrast is terrific, highlighted by the night time shots of Gotham where unfathomably deep blacks are peppered by intensely bright dots of light, and what’s also pleasing is the lack of chicken wire artefacts and block noise. 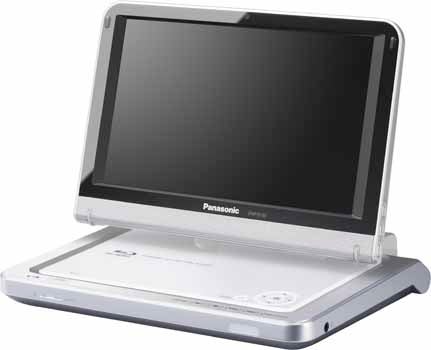 But it’s worth pointing out that the image doesn’t always look sharper than DVD, particularly during dimly-lit interior scenes. And some skin tones look a little too red, such as Harvey Dent’s face in the early courtroom scene – it’s worth reducing the saturation in the LCD setup User setting.


Sound-wise the unit’s speakers are too weak and flat to bother with, but through headphones the sound is rich and fulsome. That also lends itself well to music playback – our collection of MP3 files on DVD sounded punchy and dynamic. 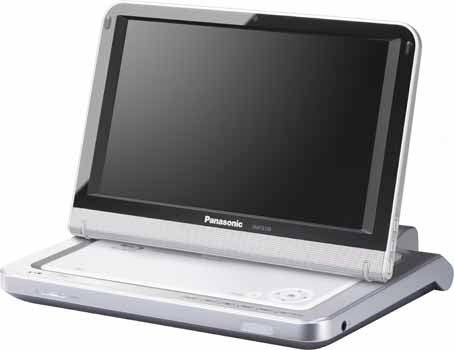 
Although not quite as feature-packed as the DMP-B15, the DMP-B100 is still an impressive portable player that musters striking picture quality, despite only being fitted with a 1024 x 600 pixel screen. With most scenes you can clearly see the step-up in quality from DVD and to most people that will be the key factor.


There are some tasty features on board too, such as DivX HD playback and an SD card slot. Although Wi-Fi enabled BD Live access would have turned a good portable player into a great one, and although the hefty price tag may put some people off, it’s worth remembering that you’re also getting a decent Blu-ray player for the home as well as for your travels.