When we first saw Panasonic’s BL-C10 we thought surely this can’t be right – a network camera with remote pan and tilt functions for around £200? But that’s exactly what you get as this baby camera offers these features and more making it highly affordable for home users and small businesses alike. Not only does it deliver pan and tilt controls but the BL-C10 also incorporates an infrared thermal sensor which can be linked to triggers allowing the camera to take snapshots of the area under surveillance when activated.


Up until now if you wanted remote pan and tilt controls in a network camera you’d have to choose from the PTZ (pan, tilt, zoom) varieties with many costing in excess of a grand. The BL-C10 doesn’t offer quite the same level of coverage but the lens can still move 50 degrees horizontally on either side of its home position and 10 degrees up and 40 degrees down vertically. A golf ball style mounting is used for the lens with a small slot allowing it to move in either direction. 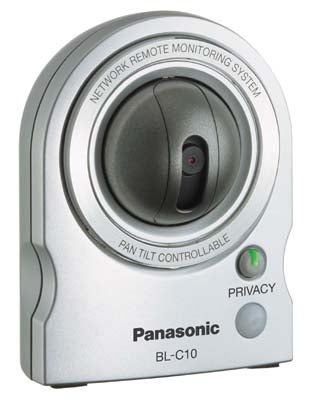 Build quality for this palm-sized package is good with a Fast Ethernet port and power socket hidden underneath a detachable panel at the rear. There are also tripod screw fixings on the back and base for mounting on a wall or horizontal surface. A useful feature is a privacy button underneath the lens mounting as pressing this will cause the lens to retreat inside its mounting and the video feed to be switched off. It’s a handy feature for turning surveillance off and on as required but it can be disabled remotely. Underneath the privacy button is the thermal sensor which has a range of approximately five metres over an arc of 85 degrees.


The bundled Easy Setup utility makes light work of installation as it searches the network and displays all discovered cameras ready for configuration. For general Internet access Panasonic also provides access to the DDNS service at www.viewnetcam.com. We found the main browser interface easy to use, particularly as you don’t need to leave the main viewing screen to modify a number of settings. You can switch between the maximum resolution of 640 x 480 pixels and the lower 320 x 240, manually increase or decrease brightness and opt for full motion video or a refresh interval of up to thirty seconds.

Up to eight preset positions can also be configured so the camera can be moved to a specific location with a single mouse click. Access to the camera can be strictly controlled by creating a list of users and using three levels to decide whether they can simply view the image, use the preset controls or have full control over camera movement. Two types of trigger are provided for taking still pictures which can be buffered in the camera or sent to an email address or FTP server. The first uses a simple timer to take still pictures at specific times on selected days while the second uses the thermal sensor which causes pictures to be taken whenever it registers a change in temperature.


The latter is a really smart feature as once the sensor has been triggered by a heat source the camera can be set to move back to the sensor location. You can set an interval after which the sensor deactivates after being triggered and even select an image quality suitable for sending to a mobile phone. Overall, the sensor performed well during testing with it easily picking up anyone walking in front of the camera. However, don’t place it behind a window or any glass panel for that matter as this will stop it working. There’s much more to play with as the web interface can access up to 12 cameras and display multiple feeds in a single window and Panasonic also bundles a demo copy of its image recording software. 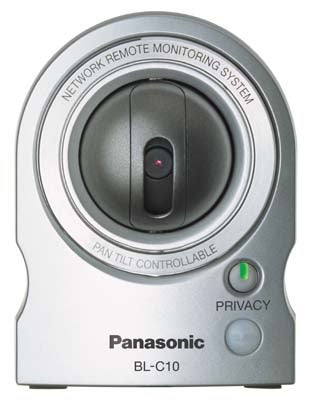 A criticism often levelled at these types of cameras is their greed for network bandwidth. To test this we hooked up the camera and a couple of clients on a shared Fast Ethernet segment and monitored it with the Sniffer Portable LAN analysis software (www.networkgeneral.com). With both clients accessing the camera at the highest resolution with full motion selected, network utilisation never went above two per cent. This is very low and the reason is the camera’s maximum frame rate is only 15fps whereas most other vendors offer up to 30fps. The downside of this is that video motion is relatively jerky. Quality also comes in for some flak as a poor focus results in a slightly fuzzy picture which the Favour Clarity setting does very little to resolve.


There’s no denying this camera is delivering an impressive range of surveillance features at a very low price. Poor overall picture quality and comparatively low video frame rates are the price you pay for these big savings but as a general purpose network camera with infrared detection capabilities, Panasonic’s little BL-C10 is hard to beat. However, if you’re prepared to pay around £40 more then Sony’s SNC-M3 looks well worth considering as this 30fps pan/tilt camera also provides two-way audio functions.