Panasonic doesn’t have such a high-profile in the IP camera market as specialist vendors such as Axis Communications but it has traditionally offered an extensive range of products. Up until now it has kept its focus primarily on indoor surveillance for its lower end products but the BB-HCM531 signals a move into the great outdoors.


Panasonic claims the camera is splash-resistant which in reality doesn’t mean much at all. The only industry standard measurement worth anything is the IP (Ingress Protection) scale which clearly defines what a product can cope with in terms of intrusion of foreign bodies such as moisture and the BB-HCM531 does not have such a rating. Consequently, if you’re going to stick it outside be careful where you put it. Temperature shouldn’t be such an issue as it is rated down to -20ºC. 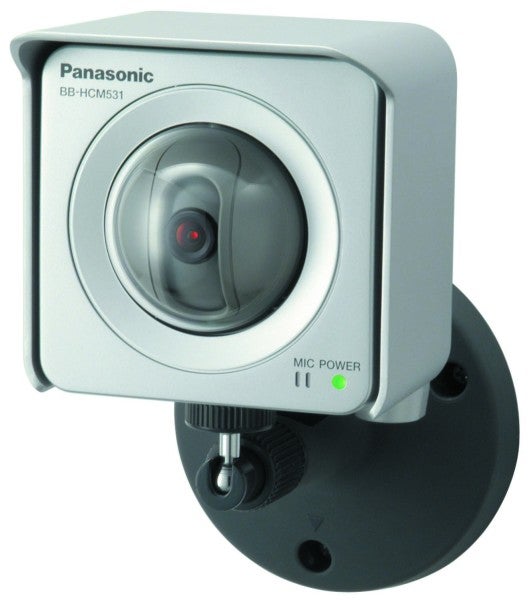 For external use the camera comes with a small cover, which fits on the back to protect the power, audio and network connections. The cover has a rubber seal and you get a lump of foam to wrap round the cables where they exit the cover and a roll of self-bonding tape to wrap round the cover and cables. It’s hardly elegant but it appears to work and is a lot cheaper than buying an external protective dome. You also get a sunshade which slots over the back of the cover and camera body and is screwed in place.


An important feature for outdoor use is support for the 802.3af PoE (Power over Ethernet) specification enabling the camera to be powered over a standard Ethernet cable from a compliant switch. We certainly had no problems with it connected to the lab’s HP ProCurve 2626-PWR PoE switch. Note that if you don’t have a suitable switch available Panasonic’s power adapter is an optional extra. Alternatively, you could go for a single-port PoE injector such as a PowerDsine 3001, which costs around £40.


Featurewise, the BB-HCM531 has a lot going for it as its golf ball lens offers pan and tilt functions with a horizontal range of 60º either side of the home position, while vertical movement covers 65º. You get a 10x digital zoom and although this is no substitute for an optical zoom we found image deterioration wasn’t as bad as many other cameras we’ve tested. The top resolution is 640 x 480 pixels, the camera supports both MPEG-4 and M-JPEG compression and the top frame rate is a very usable 30fps at all resolutions.

The bundled Easy Setup utility locates the camera on the network and from here you can go straight to the main browser interface. The home page provides the live view and we liked having all the camera controls alongside making it easy to switch picture quality settings, refresh rates, white balance and resolution. A keypad alongside can be used to control pan and tilt functions or you can simply point and click in the viewing area to move the lens and use the mouse wheel to control zoom. At this price we expect good picture quality and Panasonic doesn’t disappoint as the image is reasonably sharp and clean with good colour balance. Night vision is also very good as the camera operates down to 0.2lux. The integral microphone also worked well although with the customary lag of around one second and audio sockets are provided for an external microphone and speaker. 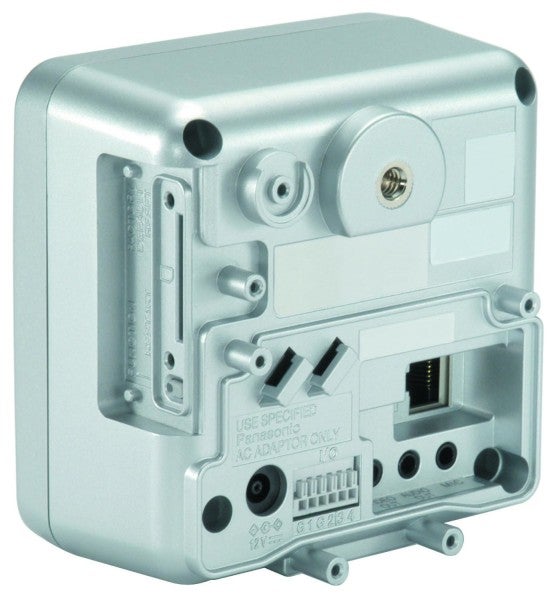 Access can be restricted with fifty password protected user accounts and each individual can have access to up to fifteen functions. You can also create a timetable that determines at what times and days the camera may be accessed. Motion detection isn’t as sophisticated as that offered by Axis’ cameras as you can only apply detection threshold and sensitivity settings to the entire image as opposed to different windows. However, once activated, images can be saved in the camera’s buffer, uploaded to an FTP server or emailed to three different addresses. A slot at the side of the camera accepts SD memory cards up to 2GB for storing recordings as well and this is also protected by a large rubberized sealing cover. If you can afford it the Multi option handles up to sixteen cameras and will display images from four at a time.


The camera is ready with support for both IPv4 and IPv6 but the IPsec VPN option on earlier models has been removed although this is no surprise as Panasonic’s support for this feature was woefully inadequate. Twenty preset pan and tilt positions can be programmed in and used from the live view panel or with triggers to move the camera to a specific position. Recordings can also be triggered using a timer that takes snapshots or you can use sensors connected to the camera’s I/O terminal block to set them off. Any device such as a security light or alarm connected to the output terminals of the I/O block can also be activated directly from the live view page.

Focus could be tad sharper but image quality and colour balance are generally very good.

Panasonic’s motion detection only works across the entire image.

User security is particularly good as access can be fine tuned on an individual basis.