Panasonic’s range of IP cameras just keeps on growing and the latest to join this burgeoning family delivers a range of useful surveillance features including remote pan, tilt and zoom capabilities. The BB-HCM381 also compares very well on price with the competition, with (linkouthttps://www.trustedreviews.com/article.aspx?art=2297 Sony’s SNC-RZ25P), for example, delivering a similar feature set but costing around £100 more.


It’s not as pretty as Sony’s PTZ camera but is just as well built and at around half the height is a lot more discrete. A recess at the rear provides a standard Fast Ethernet port for network connection and a small I/O connector block alongside allows you to add up to two of your own external sensors. A single socket is also provided for two-way audio operations and the kit includes a splitter cable for connecting an external microphone and speaker to the camera. Pan and tilt functions are good as the lens has a horizontal range of 350 degrees while vertical movement covers 120 degrees which is reduced to 90 degrees when the camera is ceiling mounted. Zoom functions are also up with the best as the camera provides 21x optical and a further 2x digital. There’s also a slot in the base that accepts SD Memory Cards for direct video recording. 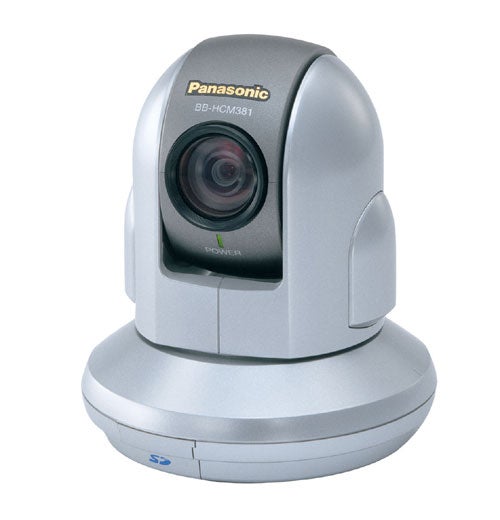 Installation is helped along nicely by the bundled Easy Setup software which searches the network and displays the camera ready for initial configuration. Sensibly, the first thing it does is insist that you provide a new username and password to protect access. The home page of the browser interface is very easy to use and we liked the fact that you don’t need to leave the main viewing screen to modify the more basic settings. The controls are laid out neatly down the left side and you can easily switch between quality, motion or standard picture settings and select resolutions of 640 x 480 pixels or 320 x 240. A casualty of the lower price is the lack of support for MPEG-4 compression. With only Motion JPEG in the frame the maximum 30fps is only achievable at the lower resolutions and selecting 640 x 480 will drop this to 12fps which does result in much jerkier feedback.


A keypad to the left of the image is provided for moving the lens and returning it to its home position while a couple of buttons above are used to initiate vertical or horizontal sweeps. However, you can dispense with these simply by pointing and clicking within the viewing area as this will move the lens to wherever the mouse is pointing. Zoom can also be controlled with the mouse wheel or by holding down the right button at the top or bottom of the picture. For picture quality Panasonic beats Sony easily as the image is much sharper and has a far more natural colour balance.

We were also impressed with the zoom functions as the mouse wheel provides ten steps for the optical zoom and then switches to digital for the last step. As most camera users will agree, digital zoom is usually of little value but with the HCM381 we found it works well with none of the image and focus deterioration you’d expect to see. We also found audio operations worked well enough as we were able to hear voices clearly at the remote location but they were out of synch with the video feed as there is a lag of around one second.

”’Sony’s SNC-MX25P to the left and Panasonic to the right – the Panasonic is a clear winner for quality.”’


Wherever the camera is located you need to ensure access is restricted and you can create a list of up to fifty password protected user accounts and choose from a list of fifteen functions and decide which ones if any each user is allowed to control. Motion detection is good and when it is triggered you can choose to save the images in the camera’s buffer, upload them to an FTP server or email them to three different addresses. Detection can be fine tuned from the preview screen which uses bar graphs to show sensitivity. However, this only applies to the entire image – Axis’ cameras allow you to create different windows to specify where motion is to be detected or ignored.


Up to eight preset positions can be configured and used with the triggers to cause the camera to move to a specific position if an alarm is tripped. You can also trigger recordings with a timer that takes still pictures at specific times on selected days and use any sensors connected to the I/O terminal block. An output connector is also provided for adding a device such as a security light which can be activated from the browser interface. The SD card increases the camera’s buffer memory and is used to store recordings with Panasonic estimating that a 1GB card can hold around 58,000 images at 320 x 240.


If you’re on a tight budget we would recommend the BB-HCM381 as despite the lower price its image quality is far better than that offered by Sony. It doesn’t support MPEG-4 compression or offer any wireless capabilities but does make up for this with a range of quality surveillance features 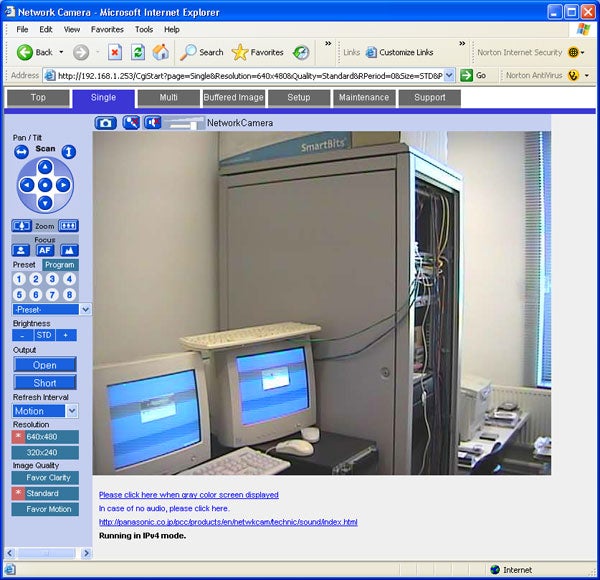 Access controls are extremely good as up to fifty users can be created and given access to specific functions.

Along with IPv4 and IPv6 the camera supports IPsec VPNs but for the latter the online help is woefully inadequate.

Five different triggers can be activated and tied to external alarms, motion detection or a timer schedule.