Here at TrustedReviews, we mostly focus on the consumer end of the camcorder market. But every once in a while a more pricey professional model comes along which we think is significant enough to warrant coverage, whether the average reader is likely to buy it or not. So this week we present to you Panasonic’s AG-HMC151E. 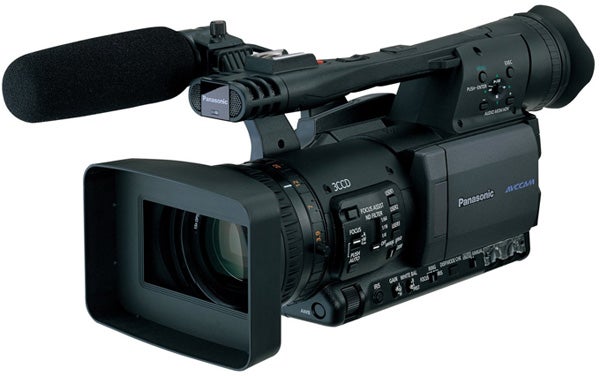 This camcorder has earned our interest because it marks yet another crossover between consumer and professional domains. This is most definitely a pro-grade model, but it uses a variant of the prevailing consumer HD video format: AVCHD. Panasonic is calling its version AVCCAM, because it also includes modes that are not normally available with consumer AVCHD. But essentially this is the same H.264 MPEG-4 compression, so footage should be editable with most software from consumer grade upwards.


One major benefit of AVCCAM is that it is specifically intended for tapeless acquisition. So the AG-HMC151E comes equipped with a slot for SDHC media, which seems ludicrously small compared to the camcorder itself. Without a tape mechanism, the camcorder comes in at under 2kg even with the huge 5400mAh optional battery. The camcorder feels deceptively light, particularly compared to Panasonic’s own AG-HVX200, which weighs closer to 3kg. This makes the AG-HMC151E much better suited to electronic news gathering (ENG) than previous Panasonics, which could get tiring to carry around. 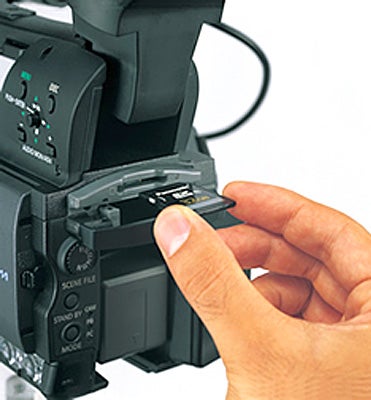 
This is where the first huge benefit of the AG-HMC151E emerges. Whereas a 32GB P2 card for the AG-HVX200 will set you back about £950 plus VAT, a 32GB Class 6 Panasonic SDHC card is around £175, and slower Class 4 cards (which are still compatible) are cheaper still. Even in PH mode, this will be large enough for around three hours of footage. Panasonic bundles a battery offering around 100 minutes of shooting life, but a four-hour duration alternative (mentioned earlier) is also available. So the AG-HMC151E is starting to look like an even more cost-effective option for ENG and events shooting.

The AG-HMC151E isn’t just for such straight-laced cinematography, though. Having the 50p frame option will be handy if you want to create arty slow-motion effects, assuming your editing software supports it (see below). Of course, all the manual features you would expect in a camera at this price are there, too.


A pair of XLR audio inputs are provided, switchable between line and mic level. You can also enable +48V phantom power independently on either channel. Two dials control levels, although they are a little small and fiddly. The built-in microphone is decent, and an adapter is provided for the accessory shoe so you can mount microphones without their own shoe adapters. You can also choose to mix audio from the built-in microphone with an external one. 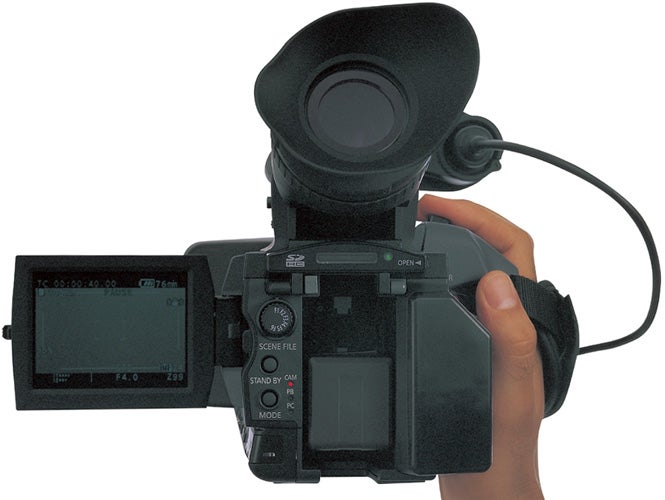 Only two lens rings are integrated, but they cover all the options. The outer one can be switched between focus and iris, whilst the inner one operates zoom, either with or without servo assistance. You can also adjust the iris using a wheel on the side. A three-position switch provides a trio of gain settings, although the actual values can be customised in the menu. Low always means 0dB, but Mid and High can be anywhere from 0 to 18dB, although the upper value depends on the recording setting.


There is a similar three-position switch controlling white balance. You can store two manual settings or select a preset. A dial on the rear provides six positions for collecting scene settings together, each of which can be customised, although Panasonic has already provided readymade presets for all six positions. There are also three user-configurable buttons that can be assigned functions such as backlight compensation or a couple of simple digital effects. There is a built-in Neutral Density filter with 1/4, 1/16 and 1/64 options, and a handy Focus Assist mode that zooms in the LCD so you can see a central part of the frame for sharper manual focusing.

Compared to other camcorders reviewed at TrustedReviews, the AG-HMC151E’s video quality can’t really fail to impress. Without much adjustment, it produces truly stunning footage in most lighting conditions. We were also provided with custom settings from an experienced BBC engineer, which improved things still further. Thanks to the high data rate, there is little evidence of compression artefacts, showing how H.264 has taken over the high ground from MPEG-2.

However, the AG-HMC151E doesn’t provide quite the best quality in its class. The sensor system uses a trio of 1/3in progressive CCDs, similar to most camcorders at this price. Panasonic hasn’t stated the pixel resolution of these sensors publicly, but the AG-DVX200 didn’t have Full HD CCDs. As a result, it worked best in 720p mode, and we couldn’t tell much difference between 720p and 1080p with the AG-HMC151E’s footage when viewed on an HDTV over HDMI, either, implying its CCDs are similarly limited. But it did keep plenty of its colour information in lower light. Sony’s PMW-EX1’s larger 1/2in sensors still makes it king in this respect, but the AG-HMC151E’s gain control bumps brightness without much grain. So in environments where you have no control over lighting, this is going to be a capable performer.


Editing didn’t prove to be a problem for 1050i-format footage. If your computer has an SD card reader, you can simply pop the memory media straight into that, or hook up the AG-HMC151E via its USB 2.0 connection and access it as a removable drive. The files were detected as regular AVCHD by all the apps we tried. Premiere Pro CS4 proved particularly smooth with AVCCAM footage. However, the Panasonic’s 720/50p mode was more problematic. Premiere Pro didn’t properly recognise it, and playback was very jerky, although Adobe allegedly has an update in the pipeline to combat this.


The Panasonic AG-HMC151E is more expensive than entry-level HDV models such as Canon’s XH-A1 or Sony’s HVR-V1E, and goes head-to-head in this respect with Sony’s HVR-Z5E. However, the convenience of the SDHC recording media is undeniable, particularly if your work requires very quick turnaround. Where these other camcorders would require an expensive external FireStore drive to provide similar workflow, the Panasonic has the benefits of going tapeless out of the box. Now that SDHC media is cheap, and AVCHD widely supported by software, this is a very timely release, and a very solid choice for a variety of intensive shooting environments.


”NB: Holdan Limited is a distributor of video editing and post-production equipment and the Panasonic AG-HMC151E is available to buy from a number of Panasonic retailers listed on its site.”