Panasonic’s initial CES press conference wasn’t exactly a resounding success. For while the brand seemed to be doing fine with normal, day to day products, it lacked the sort of chest-thumping next-gen products shouted about so loudly by most of its rivals. In particular, there wasn’t even the slightest sniff of either an OLED or 4K/Ultra HD product.

Cut to the following morning, though, and that all changed in an instant. For at his keynote CES speech, Panasonic president Kazuhiro Tsuga suddenly unveiled a 56in screen that combined both OLED and 4K technology in one cool package.

Not surprisingly this prototype screen takes pride of place on Panasonic’s booth on the main CES floor, greeting you as soon as you enter the hall. Also unsurprisingly, it produces some seriously mesmerising picture quality.

For starters, moving around it reveals practically no loss of contrast or colour even from fairly extreme viewing angles. This sort of inspection also reveals it to be a seriously attractive bit of kit, thanks to its apparently very high build quality and extremely thin rear – the latter being, of course, a near-universal OLED trait.

The native 4k demo reel being used to show the TV’s performance off comprised a mixture of a Cirque de Soleil performance and some of the highly staged ‘bright colours against a black backdrop’ footage also routinely used by the likes of LG and Samsung to show off their OLED wares. And this all did a fine job of delivering on 4k OLED’s three main messages: extraordinary image clarity, remarkably rich colours, and eye-popping black levels. 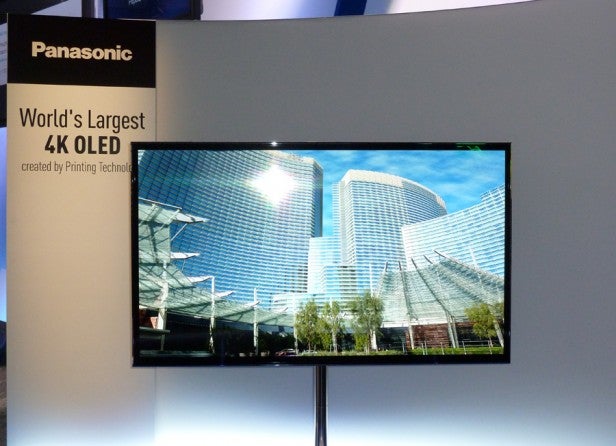 Regarding the image clarity, even though rather curiously Panasonic was forcing visitors to watch from a distance of around 3m, it was plain as day – especially with the Cirque De Soleil footage – that you were watching the extra detail and colour subtlety that’s only possible when watching native 4k footage on a native 4k screen. Skin pore detail, costume and make up textures, background subtleties – all are obvious in a way they wouldn’t be on a normal full HD screen, seducing you into the image by making it look that bit more like the real world.

It’s great to see, too, the immense detailing remaining almost wholly unaffected by motion, even when the explosion of a weird kind of tree thing in Panasonic’s demo reel causes small chunks of colour to flay all around the screen.

The ability to render so much more detail delivers another palpable benefit in the form of a much greater draw distance. A high shot looking down the Vegas strip seemed to go on for an almost infinite amount into the distance, as the image isn’t affected by the depth ‘wall’ you get with less high-resolution displays.

Colours, meanwhile, exhibit both extreme vibrancy and apparently infinite range, enabling them to look as flawless (in terms of blend and tone) as they do dynamic.

Panasonic was unwilling to put either a launch date or potential price on its 56in 4K OLED debutante. Though one interesting aspect about it we haven’t mentioned yet is that it’s the only one of the current OLED crop that ‘prints’ its OLEDs into position – a manufacturing process that’s reckoned to be much more cost-effective than the methods being employed by the other big TV brands. So if Panasonic is able to pass this potentially substantial cost-saving factor onto consumers, it could instantly propel Panasonic’s screen right to the top of many an AV fan’s next-gen wish list.