Far from your ordinary iPad rival, Panasonic’s latest tablet offering is taking the market to all new levels, with CES 2013 seeing the company show off the gargantuan Panasonic 20-inch 4K tablet.

Still someway from launch, the Panasonic 20-inch 4K tablet sees a stunning 4K display paired with a surprisingly svelte form factor that, due to its oversized 20-inch nature, is still far from  wieldy in the sense of the conventional, portable tablet market. 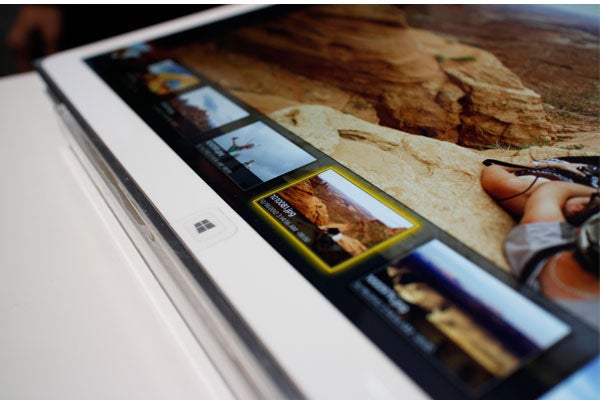 Shunning the personal consumer market in favour of attacking the ever evolving business scene, the Panasonic 20-inch 4K tablet offers more than double the on-screen real estate than the iPad 4, yet, thanks to this added visual offerinig, will be of little benefit to users on the move.

Closer resembling a touchscreen television panel than a modern tablet,  the Panasonic 20-inch 4K tablet, although technically portable, is more than likely to find itself locked to a single in-office location, such as built into a desktop, affixed to a wall or on a permanent stand.

That said, given its size, the first 4K tablet is surprisingly manageable with a streamlined design that, although lining up at a whopping 2.4KG in weight, is just 10.16mm thick at its chunkiest point. Although this hefty weight is lighter than some laptops, it is still enough excess baggage to deter many from moving making use of the tablet’s portable credentials when avoidable. 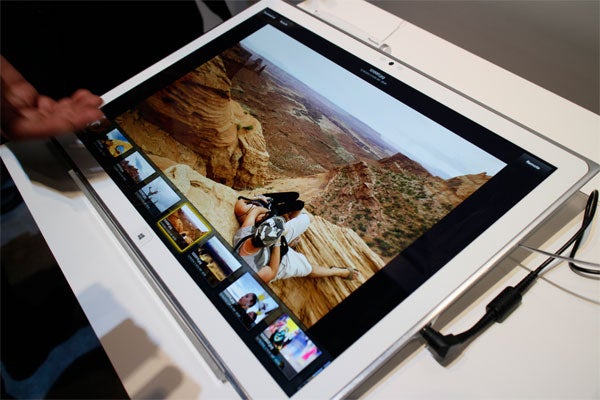 Despite its size, the Panasonic 20-inch 4K tablet is surprisingly devoid of integrated connectivity options, a disappointing omission for a device with such purposes. Although the tablet’s connectivity options are further bolstered by the standard Wi-Fi and Bluetooth services, we can’t help but wish Panasonic had esteemed the oversized unit with more than a solitary USB 2.0 port and a microSD expansion slot.

Although this lack of connection ports helps maintain a sleek, largely unblemished design, it marks a troublesome, and sure to be irritating, direction for a tablet that will undoubtedly be used primarily for business means.

Away from one of the unit’s major pitfalls, the Panasonic 20-inch 4K tablet is a true laptop challenger with a selection of specs that see it hold its own in the (technically) portable sector.

With 4GB of RAM, a 128GB SSD and a 720p HD camera embedded onto the device’s fore Panasonic’s tablet monster is a match for many more conventional devices. Where the Panasonic 20-inch 4K tablet is a bit of a slouch however, is in its battery life. Although we were unable to test the device’s battery during our CES 2013 hands-on with the device, Panasonic has suggested eventual users will be able to squeeze no more than 2 hours out of a single charge, further reason not to take the device out and about. 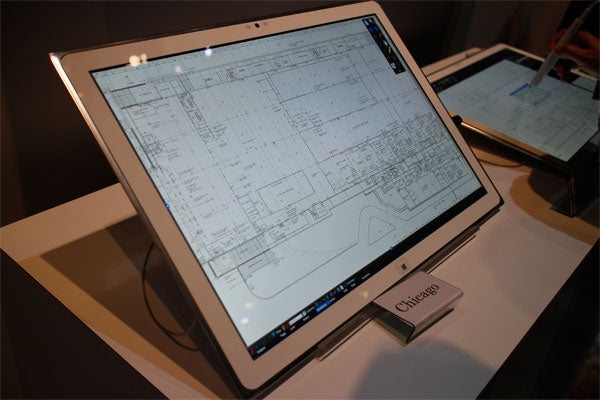 Although the model’s 1.8GHz Intel Core i5 processor would suggest the Panasonic 20-inch 4K tablet is a fast, smoothly running device, its performances failed to convey this on first impressions.

In reality, during our time with the device, the Panasonic 20-inch 4K tablet proved slightly sluggish, repeatedly hindered by glitches and a unit which provides a fairly bitty, unkempt user experience. Whilst a large part of this can potentially be put down to the sample model’s pre-release state, it does not pose a strong picture for the revolutionary tablet.

Despite a few niggling issues, the Panasonic 20-inch 4K tablet showed itself as a brilliant example of the benefits of Windows 8 Pro, with the tablet working well with Microsoft’s latest OS to provide an immersive, simple and indeed spacious experience.

Whilst the integrated NVIDIA GeForce graphics combined well with the tablet’s 20-inch 3840 x 2560 4K IPS display party piece to provide stunning visuals with deep, vibrant colours, pin sharp detail and beautiful contrast ratios, this is not the only area where the screen excelled. Responding well to touch, the Panasonic tablet’s screen features 10-finger gesture control with the device handling all commands and motion-based actions we could throw at it. 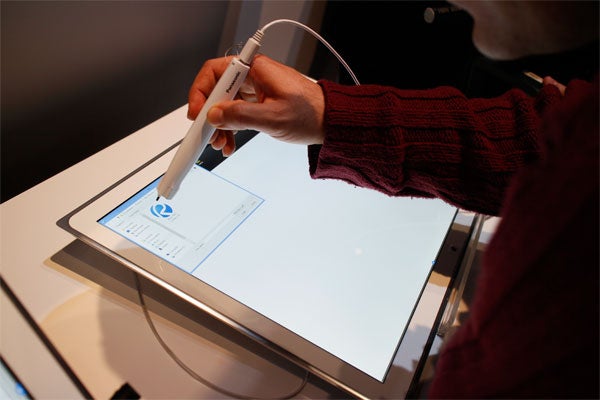 For those not wanting to splash their digits across this expansive, and likely expensive tablet, the Panasonic 20-inch 4K tablet comes with a high resolution digital Anoto live pen. As oversized as the tablet itself, this over-the-top stylus truly helps the Panasonic 4K tablet come into its own.

Having sampled the tablet and stylus together in photo editing software, we can safely say that together, the two gadgets help create a natural working environment which complement each other at every turn, working together to make sense of what at first seems a farcical, nonsensical tablet device.

Is 20-inches too big or is the Panasonic 20-inch 4K tablet simply paving the way for the future of the world of work? Share your thoughts on the matter with us via the Trusted Reviews Twitter and Facebook feeds or through the comment boxes below.