When rumours surfaced that Palm was making a Treo powered by Windows Mobile rather than Palm OS, you could almost hear the collective sharp intake of breath from Palm fans. It was true though and on 26 September 2005 the Windows Mobile based Palm Treo made its debut in the US.


Here in the UK we’ve had a much longer wait to get our hands on a Windows Mobile Treo, but that wait is now over and it is now available exclusively on Vodafone, at least for a little while, before presumably, becoming more widely accessible. 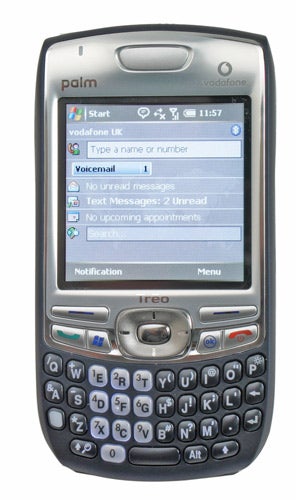 The Treo 750v is a 3G device, with quad-band GSM, GPRS and EDGE support. There’s no built in HSDPA support, which is a pity, but that aside it is pretty much state of the art in terms of over the air communications.


As I write this review I’ve been using the Treo 750v for a little more than a week. That’s been long enough for me to form some very strong first impressions, and I have to say that overall I really, really like it.


Let’s start with the hardware design. If you remember the Treo 650, you’ll recall the dreadful protruding antenna that the Americans apparently like so much. That has gone in favour of a more usual rounded design we prefer in the UK. The casing is a rather elegant blue and silver design, and there is a very pleasing, almost rubbery finish to the back and edges that helps you hold the Treo 750v firmly in the hand. 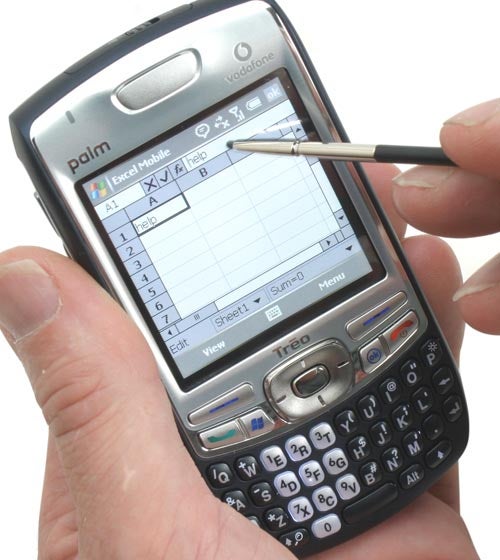 There is a definite look of the BlackBerry about it at first glance, but it is only at first glance. A second glance reveals that the Treo 750v a different device altogether. There is no jog wheel, for example, and no need for one well. You can get around one handed thanks to a front facing navigation button, a large central select button along with big soft-menu keys, an OK button, a Windows Mobile Start menu button and a Call and End button. You can tap the screen if you need to as it is touch sensitive in true Windows Mobile fashion.


On the left edge of the casing is a large volume rocker and a side button whose function you can customise so that it launches whatever application you like. On the right edge is the infra red port which complements nicely the Bluetooth that is built in. It is a pity it is Bluetooth 1.2, though and that there’s no Wi-Fi.


There is also a miniSD card slot on this right edge, which you can use to add to the built-in memory – after a hard reset my review unit had 62MB of free internal memory. On the top edge is one of my favourite Treo features – a slider you can use to turn the system volume on and off. I used a Treo 650 for ages and this was always one of my favourite features. There was never any need to fiddle with profiles – ringer on or ringer off was as complex as it needed to get.


On the bottom edge of the casing is Palm’s charge and sync slot. This uses a proprietary connector – the same as we’ve seen in some previous devices. In fact it worked fine with the LifeDrive connector that I had already hooked up to my PC, connecting to ActiveSync through this at the first attempt. Personally, I’d have preferred a mini USB for the connector type, and found the need to carry a separate charge cable for the Treo 750v very annoying.


Battery life was pretty good though, giving me nearly eleven hours of music playback from a miniSD card with the screen forced to stay on. You could probably survive an overnight trip without the charge cable if you are careful. 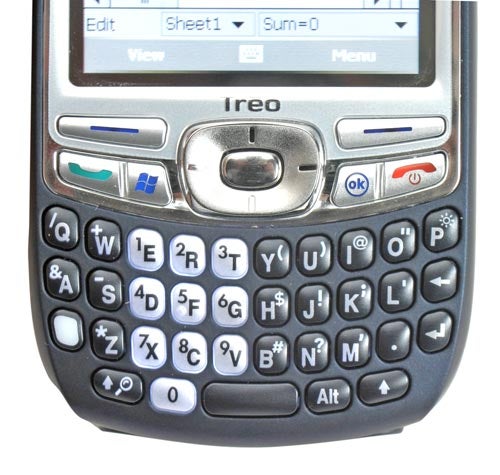 I found the keyboard responsive and surprisingly easy to use. The keys aren’t particularly large but they are nicely raised from the baseplate and physically a fair way from each other. If I have to complain about anything on the usability front it is the screen. At 240 x 240 pixels its square rendering means you just don’t get the same amount of information at once as you do with most other Windows Mobile Pocket PCs, and I found this pretty annoying.


Still, to be fair, a more standard sized screen would have made for larger hardware, and I think on balance Palm has got it right. But it does take a little getting used to. Take a look at the screen shots and note how much scrolling you need to do to assign button functions, for example.

A lens for the 1.3 megapixel camera sits on the back of the casing. This is hardly state of the art, and there is no front facing camera for video calling. I know video calling hasn’t taken off the way some thought it might, but nonetheless I’d have liked to see it provisioned for.


Palm has tweaked the Windows Mobile user interface to provide some really great enhancements. Here’s an example. You want to make a phone call – assuming the Today screen is showing, you use the navigation button to get to the top of the Today screen, where a call window will highlight. Now you start to spell out the name of the person you want to call using the keyboard. Your entire contacts list is narrowed down as you type, till just a single contact is showing. Now you choose between the numbers on offer and dial. All this can be done one-handed.

If that’s too much trouble, you can put speed dials on the Today screen complete with little photos of your nearest and dearest (or your boss, I guess – where’s that mugshot of Riyad gone?)


It is also very handy to be able to easily send an SMS to an incoming caller. The Treo 750v rings, you hit the right softmenu key and choose Ignore With Text Message, then either write a message or choose from a preconfigured set. Add the link to voicemail on the Today screen and I have found the Treo 750v one of the easiest connected PDAs to use for ordinary voice communications.

SMS messaging gets an enhancement too, with ‘chat threads’. This allows you to see all messages to and from a person as if they were an ongoing two-way conversation. I don’t uses SMS very much for important communications that I like to keep a handle on, but if you do, this could prove invaluable.


Another really useful Today screen tweak is the Google search bar. Scroll to the bottom of the Today screen and there it is. Type in a search term and press the enter key and Pocket Internet Explorer pops up with a Google window containing the results of your search.


I’ve already noted that the Treo 750v is 3G. It may have been my particular device, or it may be a more general issue, but I found that in my normal office – inside the M25 – I couldn’t get a 3G signal. I got one in various other places, and the same SIM gave me a 3G signal in other Vodafone devices within my office. It is possible, then, that the Treo 750’s antenna is not what it could be. But based on a sample of one device I can’t be sure. 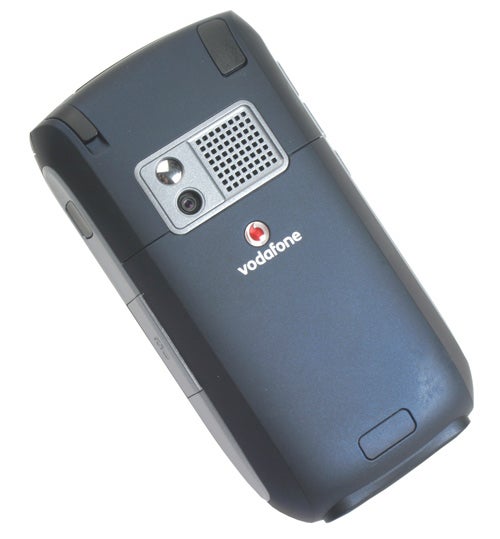 Naturally enough you get the full range of Windows Mobile software. Microsoft direct push email is supported, and you can use the Treo 750v with other options such as BlackBerry Connect, and the Vodafone Business Email service.


The absence of Wi-Fi, Bluetooth 1.2 and lack of front facing camera and the need for a separate charger all annoy. These aside, Palm has done something quite special with the Treo 750v. The company has enhanced a widely used operating system with clever tweaks that reflect how users (or at least how this user) wants to work, making it easier to perform a lot of standard tasks. In doing so, Palm has added value to Windows Mobile in ways others have not managed and produced hardware that is neat, tidy and ergonomic.