Many people were rather miffed when Palm decided not to release the original Pixi in the UK. The baby brother to the Pre, it had a smaller screen and a less cute design than its larger sibling, but it was cheaper and still used the much vaunted WebOS to power it. Finally, though, we’ve been given the successor to the Pixi, the Pixi Plus that just like the Pre Plus is a very slightly updated version.


In particular, you get a doubling of RAM to 512MB, which should help overall performance, and Wi-Fi has been added. Sadly, unlike the Pre, Palm hasn’t doubled the storage of the Pixi so the Pixi Plus is still ”only” 8GB and there’s no microSD slot for adding more storage.


The Pixi Plus’ design is an odd mix of good and bad. We like the simplicity of the single piece gloss front and the tough matt black rubber back, while the overall symmetry of it also appeals. On the flip side, though, the glossy front is made from a wobbly plastic that just doesn’t feel particularly nice. Worse is the rubber back that also feels cheap – particularly the mushy buttons that are set into it – and isn’t even finished properly with a noticeable moulding seam running round the edge.


Also, the back is attached to the front by means of a small lip that runs round the edge – pull this aside and you can prize the whole back off. Fine in principle but in practice, it’s a rather cumbersome way of taking the back off and more importantly it means you’re often left with unsightly gaps around the edge of the screen when the rubber isn’t quite sitting properly. 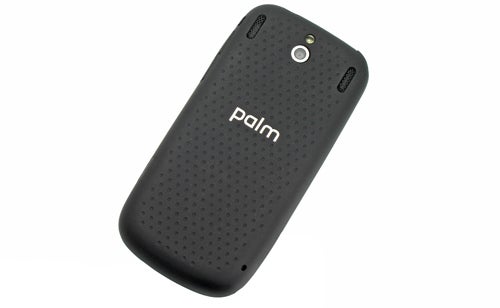 One plus point is that the backplate incorporates TouchStone technology. This allows you to wirelessly charge the phone by placing it on the corresponding TouchStone dock. Putting the phone on the TouchStone dock during a call will also switch it to speakerphone, and vice versa, while you can answer an incoming call simply by picking it up. It’s awesome technology that we really want to see in all future phones, but there is a problem with the Pixi Plus. While you get the backplate, you don’t (bundled offers notwithstanding) get the dock, so you’ll have to fork out £30 or so to get one.

Also noticeable straight away (though it was difficult to capture in our video review) is that the screen is much more visible when turned off than that of the Palm Pre. The display of the latter became almost invisible when not in use, creating the illusion that the display and the phone were as one. It also meant the rounded off corners of the software merged nicely with the surface of the bezel. On the Pixi, however, the screen is clearly visible at all times, as are the gaps between the screen’s pointy corners and the software’s rounded corners.

So, not the best start then, but thankfully the Pixi does have plenty of redeeming features. Like the Pre, it has all the external features we’d expect and they’re all conveniently positioned. There’s a 3.5mm headphone socket and power/screen lock button on the top edge, volume rocker and mute switch on the top right edge and a microUSB socket below, which is hidden behind a magnetised flap – we still can’t quite decide if this is clever, annoying, or both. Meanwhile, on the back is the camera with its LED flash and two grilles that like the iPhone actually hide a speaker and second microphone, rather than two speakers. Despite this, the speaker delivers surprisingly loud and clear audio.


Thanks to its rubber back, nicely curved design, and modest dimensions the Pixi Plus feels nice in the hand with most of the controls, the screen, and the keyboard falling within easy reach. 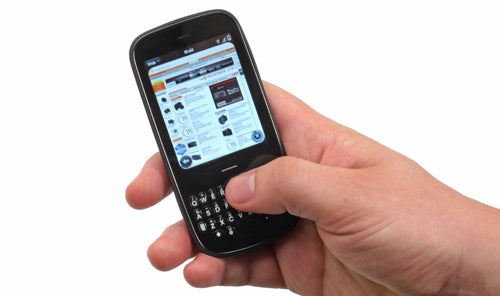 The keyboard is one thing that is actually better on the Pixi than the Pre as it has a more pronounced click to each key, giving your more feedback on when a key has been pressed. Otherwise we have to say it’s not the best keyboard we’ve ever encountered. The layout is fine, but the keys are a tad small and their rubber finish isn’t the nicest to type on. Most pressing, though, is the lack of any predictive text facility meaning that whatever mistakes you make are taken as read. There’s also no option for an on-screen keyboard.

As for the camera, it’s fairly easy to use, is quick to load, takes shots quite rapidly, and there’s an LED flash. Its lack of autofocus does of course limit your options somewhat – it’s especially annoying for closeups – and with only 2 megapixels on offer, results aren’t amazing, but it’s enough to get by. Video is present and the LED doubles as a lamp in this mode, but the results aren’t anything to write home about.

Screen size is a big topic of debate at the moment with many users wanting four-inch and larger screens on their next smartphone and as such the Pixi Plus’ 2.6inch one seems positively miserly, as does its resolution of 320 x 400 pixels. However, it’s still superior to many other budget smartphone displays and is perfectly adequate for general use. It has accurate colours, adequate viewing angles, and good sharpness – the size just means you have to scroll around a bit more than you might like to read large web pages and such like. 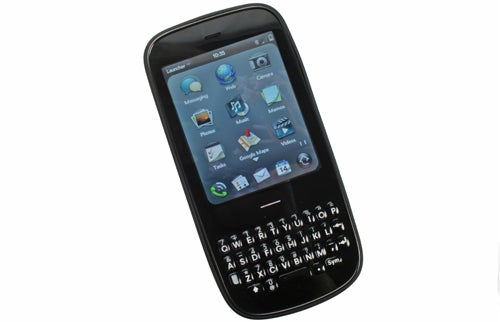 In terms of touch-sensing it’s again very usable, even if the wobbly plastic surface isn’t quite as responsive or nice to the touch as glass ones. This responsive feel of the handset is helped greatly by the WebOS operating system’s really touch-friendly interface, which is still second only to the iPhone’s iOS for look and feel. 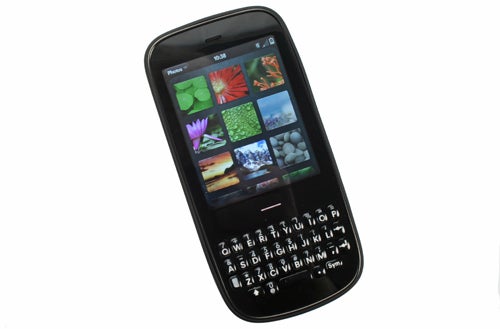 It’s also a very capable system with very good integrated social networking capabilities, email support, web browser, and class-leading multitasking abilities. Certainly if you’re looking for a smartphone mainly centred around messaging and the web then WebOS still holds its own. There’s also a goodly supply of apps on Palm app store, though it’s nowhere near the level of either Android of iOS.


This latter point really touches on the main problem for the Pixi Plus in that, thanks in part to Palm’s recent financial problems and subsequent buyout by HP, the WebOS platform is on shaky ground and development for it has been slow. Likewise handset development has been quite slow to the point where the Pixi Plus feels like a phone that should’ve been released nearly a year ago. WebOS is still a great platform but it needs updating soon to keep up with the competition. Moreover, neither the Pre (Plus) or the Pixi (Plus) really does the platform justice. 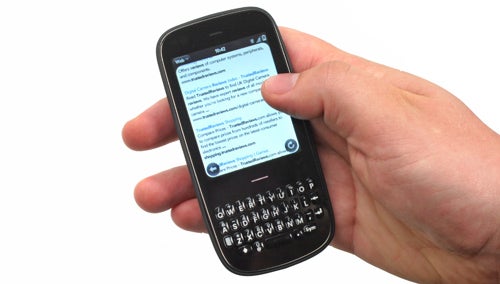 Were the Pixi Plus priced as low as you might expect then we’d probably still recommend it for its ease of use and great messaging abilities. However, thanks to Palm’s exclusive deal with O2, you can’t pick it up for less than £30pm. At that sort of money we’d probably opt for one of the lesser Android handsets out there. If you can get it cheaper, though, it’s still worth considering if you’re a fan of physical keyboards.


There are many things we like about the Pixi Plus including its slick operating system, and nice form factor. However, its build quality isn’t good enough, its keyboard is fairly poor, and it’s overpriced.