While technology is constantly evolving, the way we carry it around with us generally remains fairly static. Indeed, the great thing about buying a quality laptop bag or backpack is that you can still be using the same one in 20 years time – now how many laptops can you say that about? Let’s see if the Pakuma Akara K1 backpack can match the likes of the Dicota BacPac Xtreme.

Unloaded the bag weighs 1.3kg, and it has an internal volume capacity of 23 litres, measures 34 x 16.5 x 51cm, and can hold 15 to 17-inch laptops (the compartment’s exact dimensions are 30 x 5.1 x 39cm). According to the Pakuma website it will take “all PC and Apple notebooks from 15.4″ to 17”, but we can’t see it fitting a gaming monster along the lines of the Asus G73jh and the backpack’s physical tag modifies that to “most”. Still, it’s a level above your average budget backpack, which usually only takes laptops up to 16in.


Though you can get the Akara K1 in various black & tan colour combinations, with our favourite being the simple black model with grey piping, our sample arrived sporting “Savannah Green” panels and “Minky Brown” piping – and no, we don’t have any idea what ‘minky’ means in this context either, as we can’t for the life of us associate brown backpack piping with a sexy woman. It’s not exactly a designer backpack, but doesn’t shout cheap or ugly either. 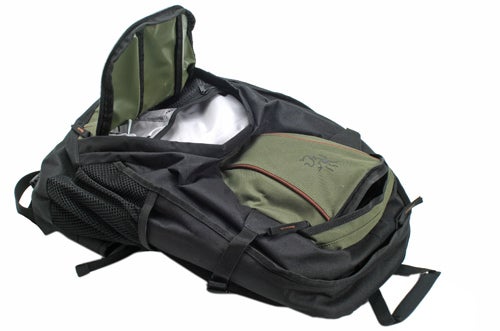 Unzipping the backpack’s main compartment reveals the laptop pocket (which we’ll get to later) with flap and space for other products in front of it. There’s also a small mesh pocket with a Velcro fastening here, but its low positioning means that anything else you put into the bag is going to land on top of the items stored here, which negates its usefulness somewhat. Having this mesh pocket near the top rather than at the bottom of the compartment would perhaps have been more logical.


At the bag’s front you’ll find a further two zippered compartments, marked out in green to show their size and shape. The top one features an internal pocket to hold your MP3 player. It has some padding at the front but none at the back, so again you have to be careful what you put in the Akara K1’s main compartment. We certainly wouldn’t be happy putting something as expensive as an iPhone 4 in here.

One of the features Pakuma touts for the Akara K1’s top compartment is a “headphone out port”, but rather than the 3.5mm pass-through cable this description led us to expect (and which is found on some bags), what you get is a gap with slightly overlapping edges. It’s nicer to have than not, of course, but its implementation is not as secure as some. 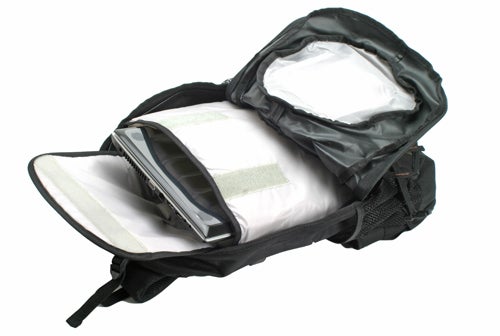 Another music-oriented feature of this compartment is a CD/DVD case which can hold 24 discs. It’s completely flexible so doesn’t do the best job of protecting your precious media, and we reckon many people probably wouldn’t use it: most laptop owners have their music collections in MP3 format, after all, though we suppose it might be handy for bringing a few films or games. Thankfully the case is only attached to the backpack with a strap ending in a plastic clip, so if you don’t need it it’s easy to remove. 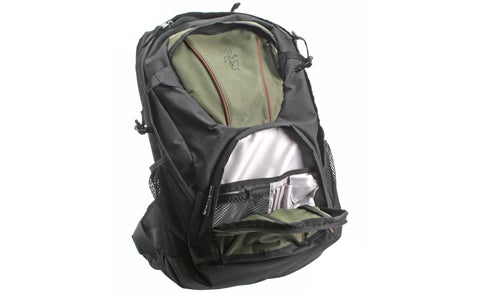 Moving on, the second, lower compartment unzips enough so that you can fold its front open like a book, revealing a divider with a zipped mesh pocket for small items like memory cards, two pen holders and what we assume is a mobile phone pocket with Velcro flap. This latter pocket is very poorly thought out, however. Not only does it lack any padding whatsoever, but you won’t be able to fit a wide phone like the Blackberry Bold 9700, or a tall one such as the Samsung Galaxy S. Admittedly quite a few people listen to music on their phones, in which case the top compartment’s pocket is the obvious place to keep it, but for those with separate MP3 players this is a disappointment. Regardless, we prefer mobile pockets on the shoulder straps for quick and easy access. 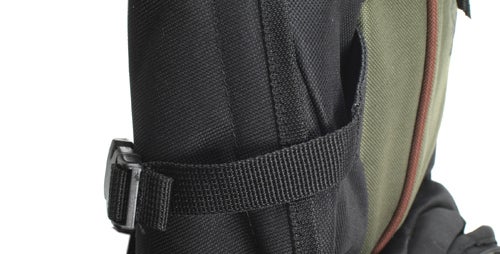 Last if not least the Akara K1 has two mesh side pockets with elastic tops for bottles and the like. Adjustable clip-straps at either side can lend extra support to the bag if needed, or help to keep it compact.


While the backpack is not actually waterproof and doesn’t feature a rain cover, Pakuma has made sure all zippered compartments are protected from water ingress for as long as possible with flaps that protrude over the zip. Quite a fuss is made about the zips being YKK-branded, with Pakuma claiming they’re “the best in the world”, but we didn’t find the action quite as smooth as the self-repairing zippers on the Brenthaven Pro 15/17 Backpack. This is reasonable enough considering the Brenthaven costs nearly £100 more, but just don’t buy the marketing speak.

So far we’ve been a little disappointed with the layout and protection of the compartments, but the laptop pocket might change all that. Used in all of Pakuma’s bags, the company’s Cocoon system employs ribbed strips of high-density memory foam to protect your laptop from harm. Unlike Brenthaven’s panel system this protection is not rigid, so a strong, focused impact can still damage or destroy your laptop. However, the strips are carefully arranged so that there is at least one on every side of your machine – except the top flap, which to be fair is least likely to require it and is still thinly padded. The advantage to Pakuma’s system compared to Brenthaven’s is its greater flexibility, as you can even fit some really ‘fat’ laptops like the Novatech X70 CA Pro. 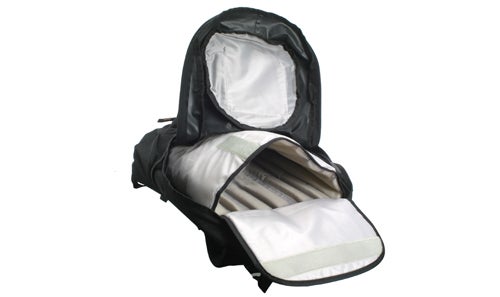 In terms of protection it is on a level with the Dicota BacPac Xtreme and superior to what is found in many offerings at a similar price point – it’s just that the Pro 15/17 Backpack set very high standards and it’s difficult to settle for less. Given the price difference, though, we’ll be lenient and call Pakuma’s system decent to good – with its capacity to take laptops up to 17in a relatively rare bonus.


Perhaps the best part of the Akara K1 is how comfortable it is to carry and wear. The top carrying loop is surrounded by a very soft foam-like handgrip, which never hurts your fingers. The backpack has very thick padding with breathable mesh both in its back and on the height-adjustable shoulder straps, which offer adjustment at the top to accommodate the exact degree of shoulder support you want and length adjustment to determine how high or low the backpack rides. 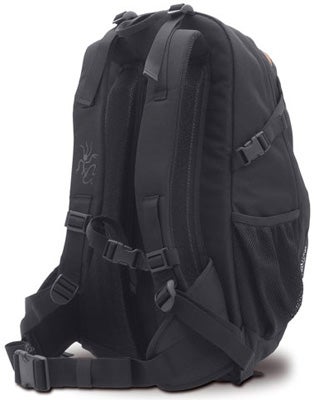 In addition to the chest strap, which is common enough, there is a waist strap too with padded side sections. All straps seem solid and can be tightened ‘on the fly’. Our only minor complaint is that the thick padding on the Akara K1’s back is in two separate strips rather than one whole one, which can be less comfortable than competing models with complete back padding if you’re carrying something heavy that isn’t flat in the laptop pocket.


Overall, it’s easy enough to forgive the Akara K1’s failings due to its low price, as it can easily be found for under £40. It’s not the most attractive bag around, but that will make it less likely to be stolen, and materials feel solid even though they lack the quality of more expensive backpacks. We wouldn’t worry too much, however, as Pakuma does include a lifetime warranty. 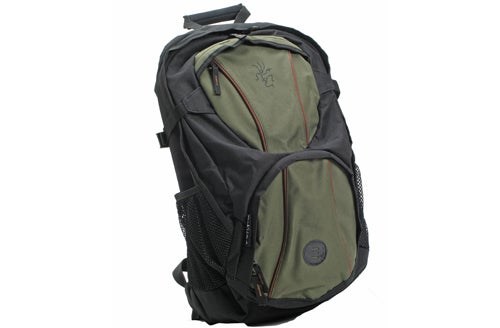 
The Pakuma Akara K1 backpack has its share of flaws, but is nonetheless above average considering its low price. If you take a little care due to the inadequate padding outside of its Cocoon laptop pocket, this backpack is a versatile, affordable and above all comfortable means of carrying your laptop and other bits around.