In Europe, we’ve had to wait nearly four months for a shot of Pain. While PS3 owners in the US have been enjoying Pain since November, those of us without a US PSN account have been forced to do without. Luckily, the PAL version of the PSN store should (fingers crossed) have it up and ready for download around the time you read this. What’s more, the finished product makes the misery of waiting just about worthwhile. 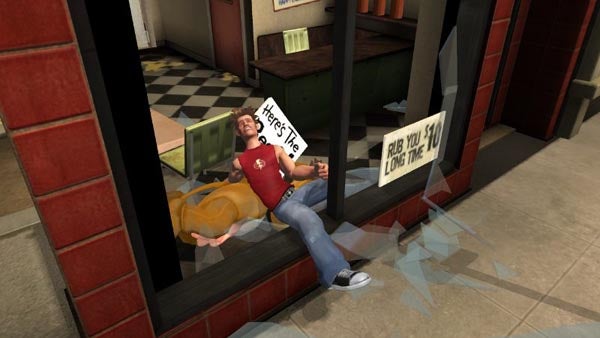 Don’t worry – you don’t have to be a masochist to enjoy this kind of Pain. Truth be told, you have to be a little sadistically inclined. Here’s the setup. Take a bite-sized portion of a living city, with a small population going about its business, police cars and heavy trucks driving down the streets, buildings under construction and an overland train running through. Next sprinkle generously with exploding crates. Now manufacture a catapult in a nearby building site, and use it to fire an irritating youth at anything that might explode, collapse, fall down or run him over. Remember while you’re at it that hitting some objects will make them move, and as a result cause a kind of chain reaction of destruction. Finally, sit back and watch what happens, grimacing and cackling at the results, then try and work out new ways of causing mayhem. In short, Pain is a bit like Burnout’s Crash mode but with people and large, man-made structures instead of cars and buses. Think ”Jackass” on the scale of ”Apocalypse Now” and you’re just about getting the picture. 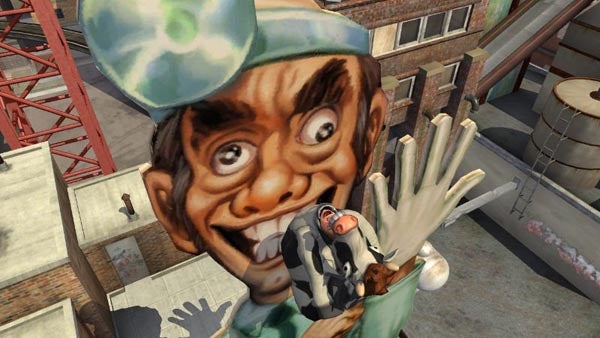 The secret to the game’s success is that the city environment is absolutely packed with buildings, vehicles, windows, potentially dangerous billboard displays and people, and that everything is modelled in a very robust implementation of the Havok physics engine. The ragdoll mechanics of your human missile are enough to make you wince, but it’s the way he then interacts with scaffolding, oversized bowling balls, mime artists, old ladies with zimmer frames, speeding taxis, monkeys and just about everything else that will really make you whistle through your teeth and mutter ‘ow!’ What’s more, once all these objects start interacting with each other, it gets really pretty gnarly. An exploding crate sends you flying into scaffolding, knocking down a metal container that lands in the street in the path of a truck. Before you know it, things are going bang all over the shop and – look – isn’t that the poor mime artist caught right up in the middle? It’s lucky that Pain has an excellent replay mode; you’ll want to see the unfolding bedlam from a range of different angles and study each clip with care.

Rotating, tilting and adjusting the power of the catapult comes first, but to help you optimise the agony you have a few extra moves at your disposal. First you can use aftertouch to steer your poor protagonist in flight. Secondly, he can grab objects and throw them – useful when you want to pick up that sucker in the cow suit and send him flying in the path of traffic, or when you grab a special bomb crate and want to toss it at the struts supporting that large, spherical tank. Thirdly, you have a limited amount of ‘ouch’ power, which you can use to scoot your just-about-to-be-hospitalised hero around with the digital D-pad when you hit an object or the ground. Shake the controller after impact, and you can even get a little boosted super-ouch. Finally, you can also get your guy to throw poses while he’s in the air, pointing him head-first, bum first or (eek) crotch first at that upcoming immovable object. You just know it’s going to hurt (but be glad it’s him and not you). 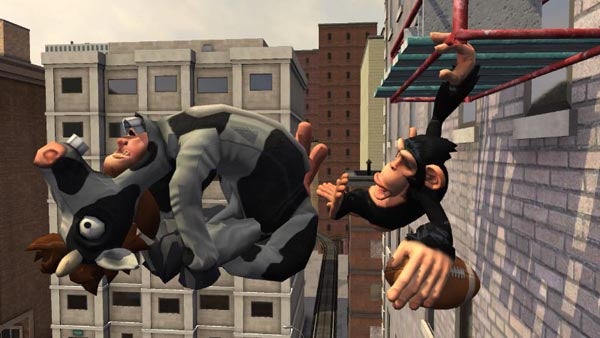 In case you haven’t noticed by now, this is all pretty nasty, boyish, juvenile stuff. Well, yes, but like a lot of pretty nasty, boyish, juvenile stuff, it’s also highly amusing. Be careful who you show it to. Some people won’t get the point. They will see the cartoon violence and destruction, say you shouldn’t be chuckling quite so much and suggest that they think it should be banned. Others will just think it’s hilarious, and will sit there with you while you play the game and watch the action replay of your last bone-crushing, glass-shattering, mime-wrecking combo, practically helpless with mirth. Some misery-guts may also point out that Pain is basically pointless. Bar a few characters and costumes to unlock, the only thing that keeps you playing is a handful of unlockable costumes, characters and trophies, and the lure of an even bigger high score. Oh, and the fact that you’ve just spotted some interesting structure or explosive crate in some unexplored area of the district, and wouldn’t it be good if you could hit it then ouch into that promising catastrophe-in-the-making over there… 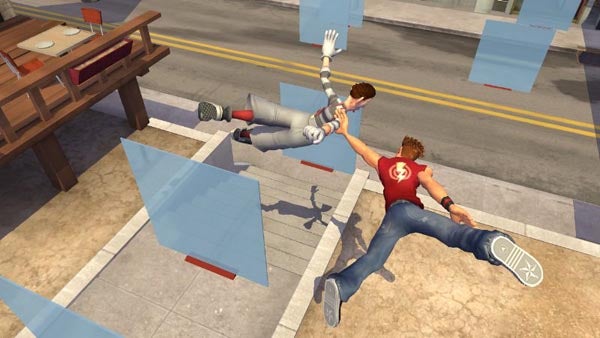 I guess it’s the sort of game where you only get out what you put in. Well, for those of you who prefer something with a bit more structure, Pain does have a few more options. There’s a mode where cheeky monkeys appear in the city, waggling their simian behinds in your direction, and you have to smack them from their little perches. There’s another where you have to grab a floating mime and throw him through a series of glass panes in as little time as possible. Meanwhile should you have your friends around you can play with them too. In the best you take it in turns to nominate and then rack up high scores on specific targets until one of you spells out the word HORSE (or any vulgar alternative you can think of). In others, you can either chain together explosions or have a slightly PAINful game of bowling.

Pain is just what we want from inexpensive download games. It’s original, entertaining, surprisingly good looking (those cartoon graphics are more detailed than you might expect) and full of amusing dialogue and wince-inducing sound effects. It’s crying out for a way to share replays, but I’m sure that will come in time. The biggest issue is longevity, and there’s no question that – eventually – the novelty will wear off. Me? I could sit and play it for hours, trying out new shots and attempting to rack up bigger combos, but not everyone is going to feel the same way. 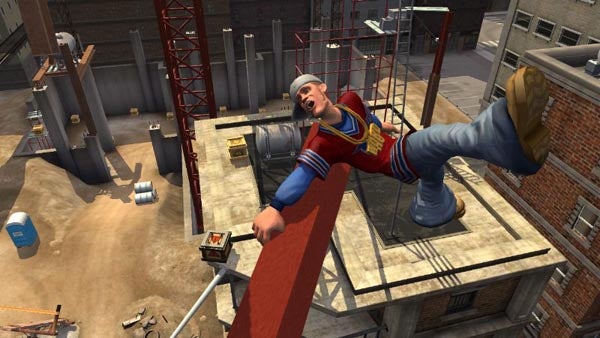 Still, longevity isn’t really a problem at this price, and it’s one I suspect will be dealt with by downloadable content. At the moment we just have additional characters, but the menu structure makes it clear that new environments are on their way, with the first expected to be an amusement park. This will doubtless require some extra outlay, but I reckon Pain fans will think it worth it. 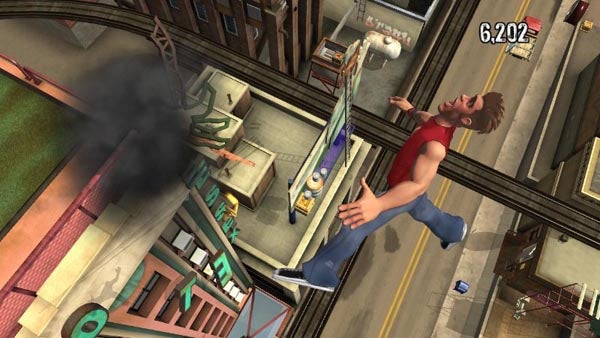 There’s no doubt that getting pleasure from Pain is a somewhat sick and twisted pursuit, and just as little doubt that not everyone will approve of your new source of chuckles. All the same, if you can take the game’s ”Jackass” style and schoolboy humour, this is one of the few essential buys on PSN. In short, no Pain, no gain, so give it a spin a.s.a.p.


Pain is a brutal, vulgar, sick and deeply unpleasant display of the worst kinds of adolescent male humour. In other words, it’s fantastic, though more sensitive souls might not agree.