While not a bad machine by any stretch, we weren’t overly impressed with the last Packard Bell (PB) machine we looked at, the Easynote TJ65-AU-010UK. Let’s find out if the Acer subsidiary can convince us this time around with its higher-specced EasyNote TJ65-AU-031UK. 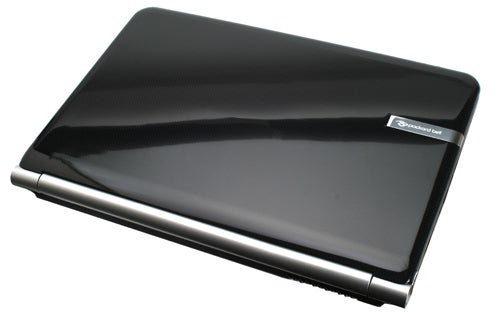 Physically this laptop is completely identical, as you would expect considering it’s part of the same TJ65 series. That means you get the signature honey-comb pattern piano-black lid, which unfortunately loves fingerprints and dust just as much as most glossy laptops.


The prominent hinge, which is visible with the TJ65 open or closed, looks a bit cheap thanks to its silver paint job. It’s a pity too, since otherwise this laptop is quite attractive once opened, combining a glossy touch-sensitive control area below the hinge with an isolation-style keyboard and a lovely soft matte finish for the palm-rest and touchpad. Build quality too is good overall.

Thankfully the red-backlit touch-controls work as well as before and there’s a nice selection on hand, though as with all reflective surfaces regular cleaning will be required. Launch manager is one of the handiest additions, as it allows you to launch any application with a touch of the ‘button’ marked P. Also helpful for less savvy users is the Backup button, which gives access to PB’s own MyBackup software. Next is a wireless ‘switch’, followed by a button that disables the touchpad and finally the inevitable volume controls. 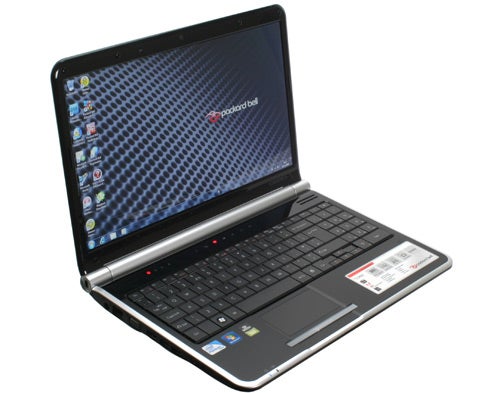 Our one niggle here is that it would make far more sense to have the touchpad-disabling button located near the actual touchpad, as on Acer’s own-brand machines such as the Aspire Timeline 4810T. However, it’s not really a major issue as, thanks to its off-centre positioning, the touchpad never interferes with typing.


Speaking of typing, as with the previous TJ65 the keyboard is truly excellent. Layout is spot-on, including a full number-pad. There’s a range of intelligent shortcuts, including brightness and duplicate volume controls on the cursor keys. Feedback for the broad, matt keys is also good, with the only exception being that the space-bar felt ever so slightly loose this time around. 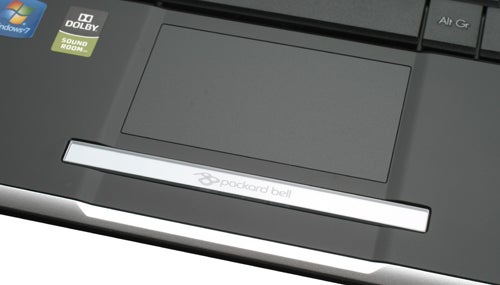 Below this the multi-gesture touchpad is nicely delineated, and – as mentioned before – offers a lovely texture. Unfortunately we found it to be somewhat unresponsive though, requiring a very firm touch and occasionally suffering from lag. Since this wasn’t an issue with the previous TJ65 we reviewed we’re willing to classify it as a defect specific to our review sample, but if you do get the chance to test this before buying it’s worth checking. At least feedback for the visually appealing transparent-and-chromed rocker switch beneath the touchpad is good.

Getting onto the TJ65-AU-031UK’s connectivity, there’s nothing too exciting here but all the basics are covered. You get VGA and HDMI for video, four USB ports (two on each side), microphone and headphone sockets, a memory card reader that will accept SD/HC, MMC, xD and MS/Pro and a Gigabit Ethernet port. For optical drive duties, meanwhile, we have a standard DVD-Rewriter, and there’s no sign of the misaligned tray we noticed on the previous TJ65 model.

So far, so average. It must be said though that the TJ65-AU-031UK’s internals are far better than one might expect given the lowly £430 asking price. Admittedly a Pentium Dual Core T4300 running at 2.1GHz isn’t too impressive when compared to the Core 2 or even Core i7 CPUs in many laptops, but the important thing is that it’s more than capable of coping with anything the average consumer might throw at it, and certainly a better alternative than the Celeron CPUs found in many budget mobile systems.


This is backed up by a full 4GB of DDR2 RAM, more than enough for the installed 64-bit version of Windows 7 to feel perfectly comfortable. Storage is also fairly generous with 320GBs’ worth spinning at 5,400rpm. 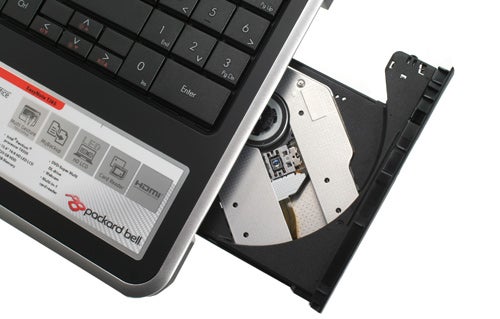 Graphics are of the Intel Integrated variety so won’t be up to any but the most basic 3D games (as evidenced by the pathetic 15.1fps in TrackMania Nations Forever at the screen’s native 1,366 x 768). Yet like the CPU, for most other tasks, including multimedia and productivity, they’re perfectly adequate.


Wireless is up to speed ‘n’, so pretty much the fastest you can get, though to meet its price point Packard Bell has sacrificed Bluetooth. We’re not sure we wouldn’t prefer slower WiFi and Bluetooth onboard, but either way the latter is a common omission in this price range while the former is still relatively rare.


Another nice touch is the inclusion of onboard Dolby Sound Room processing, which should lend a little extra perceived depth to audio whether using speakers or headphones. 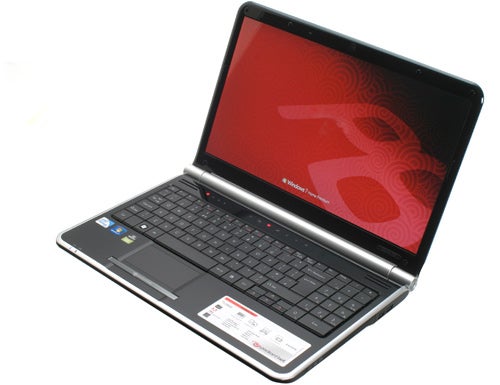 Speaking of audio, the stereo speakers on the EasyNote TJ65 aren’t too bad. While nowhere near as acoustically accomplished as the Harman/kardon models found on the likes of Toshiba’s Satellite A500 range, there’s still easily audible volume with a decent sense of depth here. Bass is where they fall down, but for casual videos the inbuilt efforts are fine.

The TJ65-AU-031UK’s 15.6in, 1,366 x 768-resolution screen is an unexpected highlight, especially considering the version on the previous TJ65 left us unimpressed. Aside from distracting reflections due to the glossy finish and some inevitable weaknesses of a TN-panel, such as strong contrast shift depending on viewing angle, it put in a decent performance. 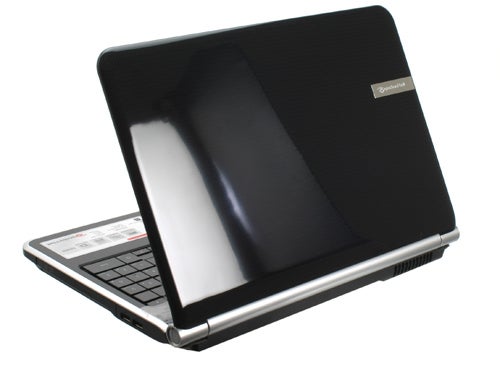 In our testing there was no sign of backlight bleed and backlighting was fairly consistent, colours were rich without being oversaturated and banding so minimal as to be almost unnoticeable, while text was never less than sharp. At the right angle, the screen will also give you reasonable black detailing, meaning you’ll get the best out of dark films and games (the few that the Intel graphics will let you run, anyway) – albeit at the cost of white differentiation.


Finally on the hardware front we take a look at battery life, which thanks to the 4,400mAh (48Whr at 10.8V) battery is quite good. Nearly three and a half hours in MobileMark’s Productivity benchmark (at 40 per cent screen brightness and with Wi-Fi turned off) ought to be plenty for most users, especially since the screen is still usable at lower brightness levels. 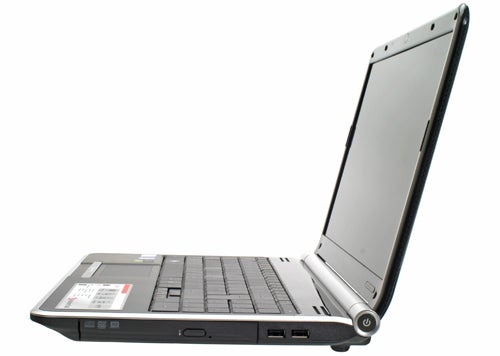 Software has also seen an upgrade over the previous Packard Bell TJ65, most notably with the OS transitioning to a 64-bit version of Windows 7 Home Premium. This is accompanied by 60-day trial version of MS Office and Norton antivirus.


Far more interesting than these trial pieces, however, is an inclusion unique to Packard Bell’s entire mobile range: a full version of Adobe Photoshop Elements 7 – and though Adobe Elements 8 is now out, it’s still a worthy inclusion and great a value-add, especially for those with an interest in digital photography or design. 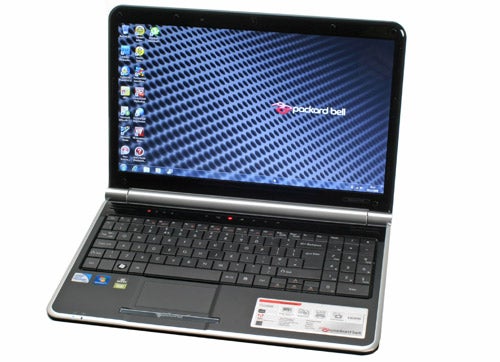 In terms of value, £430 sounds like a great price for what you get. Indeed, unlike its predecessor, the TJ65-AU-031UK is one of the better-value laptops we’ve reviewed. However, there is the slightly unresponsive touchpad to consider, and also the fact that laptops with Vista pre-installed (basically older stock, but with Windows 7 upgrade vouchers) are going at bargain prices at the moment. For example, you can get an Acer laptop with a proper Core 2 Duo and Blu-ray drive plus dedicated graphics for around £480. Those wanting true portability, meanwhile, are better off with the award-winning Aspire Timeline 1810TZ for the same £430 price.


Despite a slightly unresponsive touchpad, the Packard Bell EasyNote TJ65-AU-031UK offers good value for money, making it a prime candidate for those looking for a capable, all-round laptop on a budget.

The TJ65-AU-031UK pulls ahead partially thanks to running 64-bit Windows 7 as its OS.