Packard Bell has been around for an age. Once, like most PC manufacturers, it was known for producing a range of anonymous beige boxes, but the glorious 1990’s have long since passed in favour of the glossy blackness of the new millennium. Okay, so glossy black is definitely an improvement on beige, but aside from the occasional exception, the PC industry is no less driven by ‘same here’ design than it ever was. Enter the Easynote NJ65, a 14in laptop that shares all the facets of modern laptop design, but delivers them at a very affordable price. 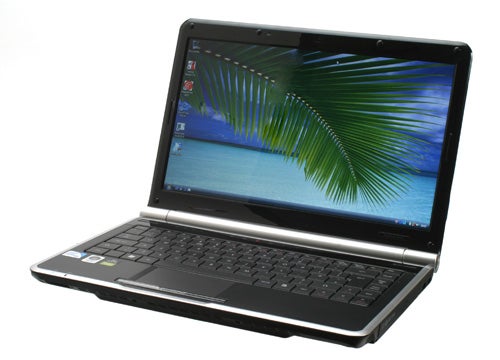 Let’s start with some simple specs. Running the show is a dual-core Intel Pentium T4200. Despite not qualifying as a ‘Core 2 Duo’, it’s intrinsically the same as the Intel Core 2 Duo T6400, sharing the same 2.0GHz clock speed and 800MHz front-side bus, but with half the L2 Cache: 1MB. This is joined by 3GB of RAM and a healthy 320GB hard drive, which is a decent triumvirate for a laptop that costs less than £500. At 2.3kg this is a moderately portable machine too, so can perform the role of day-to-day workhorse and desktop replacement in one.


There’s plenty more to enjoy, too. Despite the budget price you still get a decent battery; a six-cell pack with a 4,400mAh capacity, while Draft-N Wi-Fi and Gigabit Ethernet are also present. Admittedly, you only get Intel’s frugal but otherwise crippled integrated graphics and there’s no Bluetooth either, but you do get a 1.3-megapixel webcam. Moreover, Packard Bell sweetens things with the inclusion of Dolby Sound Room (which delivers superior headphone virtualisation), but more interestingly Adobe Photoshop Elements 6 comes pre-installed. This provides accessible but very powerful image editing tools, as well as the means to share and organise your collections.

This is all fairly good news for prospective buyers, but the NJ65 does begin to betray its budget origins in its connectivity – not because it’s especially poor, but purely because it lacks anything out of the ordinary. As such you’ll find three USB ports, VGA and HDMI for video, an Ethernet port, line-in and line-out jacks for audio, and a memory card reader, but no ExpressCard slot or eSATA.


Measuring 14in across, the display features the now routine 1,366 x 768 native resolution, as well as the ever polarising glossy finish. It’s a passable effort, offering colour production about on a par with what you’d expect at this price, but it does suffer relatively shallow viewing angles and small text could be sharper.

Much the same can be said of the speakers, which are good enough for the occasional online video or TV episode, but are left wanting with anything more taxing. This is where the Dolby Sound Room processing comes in, offering its Dolby Headphone technology for particularly effective virtual surround sound effects when wearing headphones.

Aesthetically, as mentioned before, the Easynote NJ65 has all the hallmarks of a contemporary laptop. Thankfully, though, it doesn’t apply any of them too liberally. Its brown patterned lid is glossy save for the polished Packard Bell logo, while the screen bezel and segment above the keyboard are glossy black, but the main body of the machine is completed in a smooth matte black. As a consequence the NJ65 manages to look attractive and eye-catching, without surrendering practicality entirely. Our only concern is the silver trim around the edges, which looks a little cheap and is bound to scuff easily. 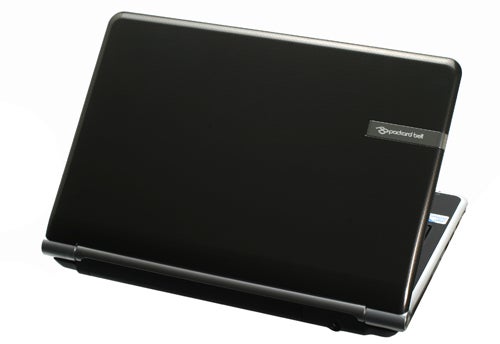 This isn’t the only build quality concern, since the keyboard is also slightly disappointing. Its layout is actually very good, but the keys have a light and flimsy action to them and the keyboard as a whole suffers from noticeable flex. This makes working on the NJ65 less pleasurable than say the Samsung R522, which while larger (it uses a 15.6in display), offers a better typing experience as well as more flexible connectivity.


No meaningful complaint can be made of the touchpad, though the rocker style button is a tad unusual in that it extends beyond the confines of the touchpad. Like a lot of similar implementations the buttons prove a little stiff too, though that’s not really worth fretting over. 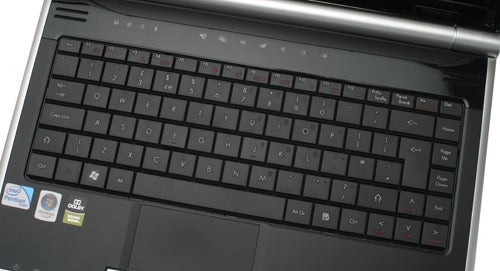 Neither is the performance, which isn’t earth shattering but still perfectly acceptable. In PC Mark Vantage the Samsung R522, which uses the Core 2 Duo T6400 mentioned earlier, is around 10 per cent faster, but the NJ65 is still a solid performer and will deal with normal productivity tasks and light image editing just fine. Even video editing should be fine, though HD footage would prove more taxing.


Another arena you’ll have to avoid is gaming, with the Intel integrated graphics delivering a paltry 11.9 frames per second (fps) in Trackmania Nations – 30fps being the desirable minimum. If you’re after a little more grunt you may want to look at the HP Pavilion dv2050ea, which at 13.3in is similarly portable but offers superior nVidia-based graphics. 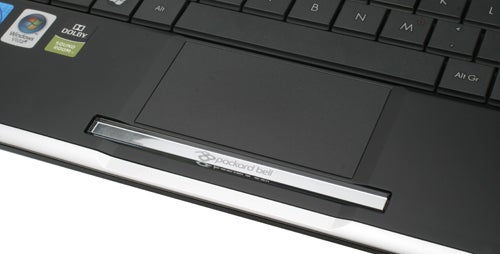 Battery life, on the other hand, is very good. In the Productivity segment of MobileMark 2007, it managed a solid three hours and 47 minutes, increasing to four and a quarter hours in the lower intensity Reader test – both very good results, besting the Samsung R522 by a handful of minutes, though the more expensive HP Pavilion dv2050ea was comfortably better than both.


As an affordable and portable laptop, the Packard Bell NJ65 is well worth considering. It has all the right features, performs well and even throws in one or two extra features into the bargain. However, it’s let down by a mediocre keyboard, which is worth testing out before you hand over your cash.

Overall the NJ65 performs well, but its integrated graphics mean it’s not the best option for gaming. HD video editing would also be a little slow, but image editing and general productivity should pose now problems.

Three hours and 47 minutes is a good result for any laptop, but is particularly good for one costing less than £500. It marginally beats the similarly-priced Samsung R522, but the more expensive HP has them both beaten.

Over four hours of low intensity use is another excellent result.

Two hours and 21 minutes at 100 per cent brightness is long enough for most films and by reducing the brightness you could squeeze closer to three hours of DVD viewing.