In the previous generation netbook race Acer’s entrants, such as the Acer Aspire One, sold like hotcakes. When the company purchased the Packard Bell brand, it reproduced its successful design under the new brand and called its effort the Dot S. Now Intel has released its new Pine Trail platform, we’re looking at its successor, the Packard Bell Dot S2. But given it’s the practically the same basic chassis that Acer sells, why should you buy the Dot S2 over Acer’s own model? 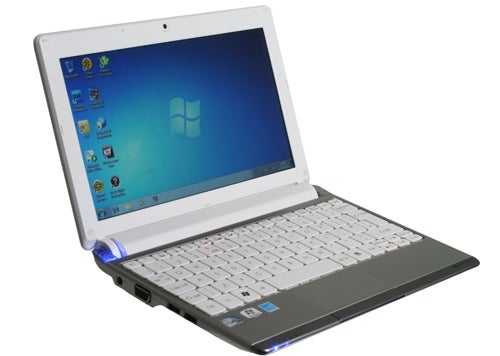 For one thing, PB totally spoils you when it comes to extras. First off you get a very attractive slip case, made from strong neoprene with Velcro fastening. It’s one of the better bundled netbook cases we’ve come across. Then there’s the innovative power supply. Not only is it conveniently built into the power socket, it also features an unusual rotating removable plug that will make the PSU fit in any orientation you prefer – genius! 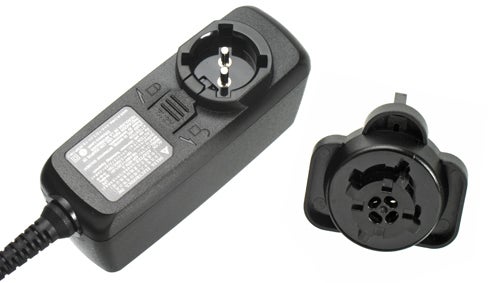 Last but not least there’s a device that looks a little like a memory stick with a cable plugged into it called XSync. Its main function is synchronisation between the Dot S2 and your main PC or laptop, though of course it’s compatible with any two computers you care to hook up to it. As soon as you insert the XSync dongle its software launches automatically, giving you the choice between ‘Folder or Outlook Sync’, or the ability to act as a ‘PC Bridge’ which allows you to copy files directly from one machine to the other. It’s a great inclusion for any netbook, which is after all likely to be a secondary computer, though some may find using webmail and the likes of Dropbox will achieve the same effect with far less fuss. 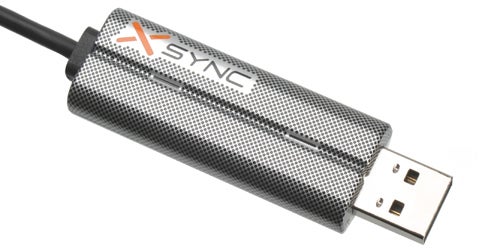 On to the Dot S2 itself, when closed it looks much like any other netbook. The subtle silver wave pattern on our white model’s glossy lid is attractive, though it fails to hide fingerprints, and the tapered edges make it look relatively slim. It will also be available in ‘Cherry’ Red and ‘NightSky’ Black.


Unfortunately the interior is less appealing than the previous Dot S, thanks mainly to the battery bulge around the hinges and the silver finish that clashes somewhat with the otherwise white machine. On the other hand the netbook does have a few stylish touches, such as the power button to the left of the hinge which features a blue-backlit spiral pattern.


Many will also appreciate the screen’s matte bezel, though the 1,024 x 600 display itself is unfortunately glossy. Mind you, it’s a fairly good example of its kind. It does suffer from the usual poor viewing angles and contrast shift, but aside from this it’s very bright, colours are vivid, and text is sharp and readable 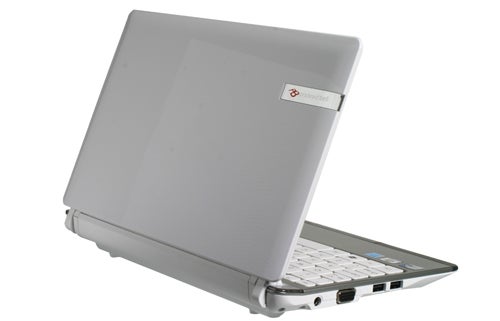 As with the Asus Eee PC 1005PE it’s a shame you’re stuck with a lower ‘sub-HD resolution’ for the screen. But if you’re willing to spend a little more then the likes of the the SonyVAIO Mini W and the Dell Mini 10 – to name just a couple – are available with 1,366 x 768 screens. Moreover, while desirable, many may find the Dot S2’s resolution more readable on a small display such as this.

Like its screen, the PB Dot S2’s speakers are good though not outstanding. Bass is utterly absent and audio is occasionally muddled, but generally it comes across clearly and at decent volume levels for a netbook.

It’s also very difficult to find fault with the netbook’s chiclet-style keyboard. Though key travel is necessarily shallow, feedback is nice and crisp, so Packard Bell/Acer can pat themselves on the back here. This combines with the keys’ matte surface and an excellent layout to make typing a pleasure. Intelligent placement of secondary functions helps, too. Overall, it’s on a whole other level to the Eee PC 1005PE, indeed it’s among the best netbook keyboards around.


Below it, the large matte touchpad does nothing to curb our enthusiasm. Marked by a slightly textured pattern of white dots that feels pleasant under the finger, it’s very sensitive and multi-touch works smoothly. Its buttons are likewise just right, with no handicap from being incorporated into a single rocker switch. Frankly, where input is concerned, this is one of our favourite netbooks. 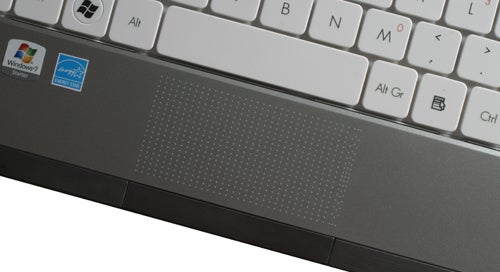 Connectivity brings us back to earth, though. As with most netbooks you’ll find a VGA output, three USB ports, headphone and microphone jacks, an Ethernet port and memory card reader, with nothing like HDMI to get excited about.


The hardware is just as uninspiring. Like most new netbooks, Intel’s Atom N450, running at 1.66GHz, is paired with the company’s NM10 chipset and GMA 3150 graphics to make for a platform that’s slightly faster in general use and even more efficient than its already frugal predecessor, lowering power usage from 8W to just 5.5W.

This is backed up by 1GB of RAM, which again is pretty standard though 2GB is slowly becoming more prominent. An ample 250GB hard drive takes care of permanent storage. One slight disappointment is the lack of Wireless-N Wi-Fi, with just 802.11b/g available, and there’s no Bluetooth either – both disadvantages compared to the Asus Eee PC 1005PE we previously looked at.


As we discovered in our 1005PE review, you’ll just about be able to play back high definition 720p video on this specification, but forget about gaming or anything else remotely demanding. Of course, everyday applications will run just fine, held back mainly by the limited screen real estate.

Aside from its generous hardware bundle, it’s on the software front that the Dot S2 manages to distinguish itself. Windows 7 Starter is installed, which despite some limitations still provides a far superior experience to XP. However, the undoubted highlight is a full version of Adobe Photoshop Elements 7. It’s a great bonus for any digital photography or design enthusiasts and at £40 retail makes for a good value-add too. It’s worth bearing in mind that the Dot S2’s weak specification does occasionally struggle with this application, but as long as you don’t apply complicated effects to large image files it generally runs okay. 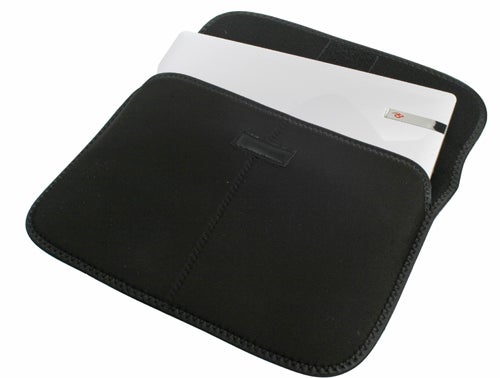 Inexplicably, battery life is slightly poorer than that of the Asus Eee PC 1005PE, despite using identical internals and a battery that’s rated at the same 4,400mAh (48Watt-hour) capacity. PB deserves credit for quoting a more realistic eight-hour battery life (compared to Asus’ claim of 11 hours) on its packaging, though confusingly it states 10 hours on its website. In our usual test, running a looped video file at 50 per cent screen brightness with wireless turned off, the Dot S2 managed just over six hours: an hour less than the 1005PE. Mind you, on its own merits this is still plenty for many users.


An MSRP of £299 is in line with other basic Pine Trail netbooks coming to market. As discussed in the Eee PC 1005PE review, that makes for a rather poor proposition as you can get the likes of Toshiba’s excellent NB200 for around £220 these days. However, if you like the sound of XSync and Photoshop Elements 7, the Packard Bell represents decent value and this should be further enhanced as older models go out of stock and these new ones begin to fall in price. If you’re looking for something more powerful and with digital video out, keep in mind that netbooks like the HP Compaq Mini 311c offer an HD-resolution 11.6in screen and 1080p video playback, CUDA acceleration and HDMI thanks to nVidia’s ION chipset, all while costing only a little extra. 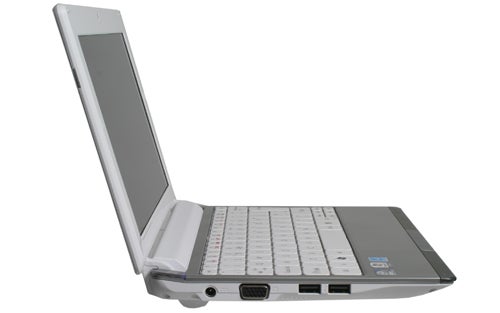 
It’s not the prettiest netbook around, but the Packard Bell Dot S2 offers an excellent keyboard and touchpad, decent screen and speakers, and some innovative and genuinely useful extras. It’s definitely one of the better Pine Trail models so far, but it’s still worth looking at older generation netbooks if you’re on a tight budget.