*Editor’s Note* Below is our thoughts on the Switch port of Pac-Man Championship Edition 2 Plus. The score atop the screen is of our from our review of the original release, which you can read in full below our Switch verdict.

How do you improve on perfection? Bandai Namco pulled the trick off once before with Championship Edition, when it turned the iconic Pac-Man into an incredible modern arcade game. Last year the team tried to make lightning strike twice with a sequel, but it didn’t quite deliver in the same way. Superfluous additions that took away from the simplistic brilliance of the first meant it didn’t shine as brightly.

Now, we have the same problems on Nintendo Switch, where yet another needless mode only serves to complicate things further, leading to a frustrating and poor experience. Couple this with an inconsistent framerate and we have a port that does more harm than good. 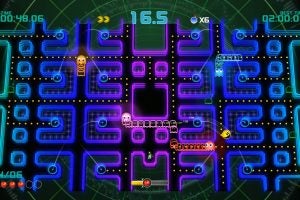 Pac-Man Championship Edition 2 Plus brings over all the content from the original release and adds a new “Plus 2P” mode, a new co-op score attack where two players must work together to collect pellets, take down ghosts and rack up the highest score possible. In practice, it’s very much like Pac-Man meets Bubble Bobble, though not half as fun as that combination sounds. It’s clunky, frustrating and becomes more about micromanagement than the fast-paced excellence that Pac-Man is known for.

Two Pac-Man (Men?) start on the screen, and must collect all the pellets before meeting together to ‘burst’ the fruit, essentially by kissing, before moving onto the next board. Eventually you’ll pick up a power pellet, and must then work together to chase and chomp down the ghost train. Again this is achieved by one of you chewing the front end, and the other racing round and eating the other end of the ghosts, meeting in the middle. This makes the whole experience so much slower.

With two players it becomes a mess, especially if there’s a disparity in skill between the two, meaning one has to pick up the slack and will always be monitoring their lesser-skilled teammate. And with AI there’s no predicting what they’ll do next, but as it tries to guess your pattern around the board, you feel like you’re playing second fiddle all the time. Also, AI Pac-Man never tries to get the attention of ghosts if they lie off the path of the pellets, meaning your score won’t be as high as it should. 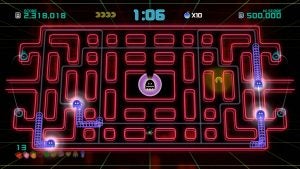 It feels like the game would have been better served without this mode tacked onto it, as it distracts from the rest of the game, which fortunately plays as well as it did before, with one notable exception.

I’ve been playing predominantly in portable mode on the Switch, and unfortunately framerate dips are all too frequent. Sometimes in multiple five-minute runs I’ll get two or three significant dips, and when you’re trying to dodge ghosts in the latter stages and nail nanosecond-perfect timed turns, they can be incredibly annoying.

On the Switch, too, the smaller analogue sticks mean the finite control required to guide Pac-Man through the boards can be inconsistent at times. The arrow keys are also less than ideal, meaning you may want to use the Pro Controller if you want the best scores.

The good news is the core fun game that arrived last year is available on the Switch. The bad news is it’s held back by a frustrating framerate and a tacked-on two-player mode that’s pretty rubbish.

If you love Pac-Man, play Championship Edition or even the 1980 original. If you have to have Pac available on the go, this Switch version may not be the best, but it’s still perfectly serviceable for all your high-score needs.

Pac-Man Championship Edition was a masterclass in how to take a classic game and fit it into a modern template. It kept what people loved about the original but made it faster, more compelling and borderline addictive. Pac-Man Championship Edition 2 walks a similar line, and while it may do a little too much for its own good, is yet another excellent addition to the franchise.

A sequel such as this is always difficult. A developer doesn’t want to stick too rigidly to the first incarnation but, similarly, iterating for the sake of it can take away some of the magic. There’s definitely more than enough pluses to justify Pac-Man Championship Edition 2’s existence, but Namco Bandai probably could have held back a little as well. 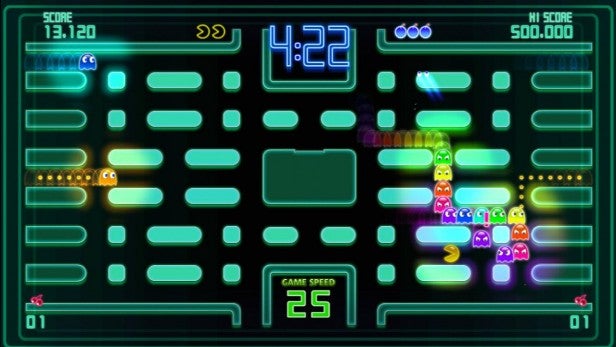 Champion Edition 2’s core gameplay remains lightning quick and instantly satisfying. You’re still Pac-Man and your goal is still to eat pellets while avoiding ghosts, but Championship Edition 2 is much more focused on your score than just seeing if you can survive. The aim is to complete a level in as short a time as possible while amassing a score that will drive friends mad as they try, and fail, to beat it.

Namco’s also made numerous additions that can change your play style significantly. The first of these is ‘ghost bumping’, which allows you to literally bump off ghosts. It’s been introduced to keep proceedings quick.

There’s nothing more Pac-Man than having to start again because you mistimed things and cornered yourself. Now, though, a single tap will see you bounce off your foe and keep on munching. The trick is not to do it in quick succession. Do this and the ghost loses its temper, becoming twice as fast and twice as vicious. It becomes very difficult to escape when they’re in this mood, although more skilled players can use it to their advantage. If you need to free up a pathway, for example, tactically angering a ghost is an option. Just make sure you’re quick to react. 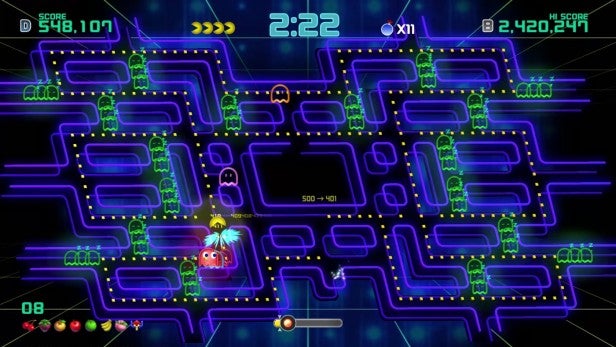 On top of this there are bomb jumps (so you can now leap around the maze), the ability to brake, and also time your turns so you take a corner quicker. All have been introduced to be mastered and doing so gives a very real sense of progression, especially when you get to the later levels.

The game never becomes overwhelming, but some stages flip the difficulty switch out of nowhere. If you’re not a pro when you get here, you most certainly will be afterwards.

Boss battles are another new addition. Battles are transforming stages where damage is dealt to the boss by successfully completing parts of them. It’s a nice way to change up Championship Edition 2’s pace without veering too far away from the original’s template.

Throughout all of this, it’s the levels themselves that are the real appeal. Designed perfectly and always keeping you on your toes, they’ll also expand mid-run and even ping you off onto a completely different layout should the situation call for it. It’s set up so you always believe you can do a little bit better next time round. You’ll have no issue playing them over and over until you succeed. It just doesn’t get boring. 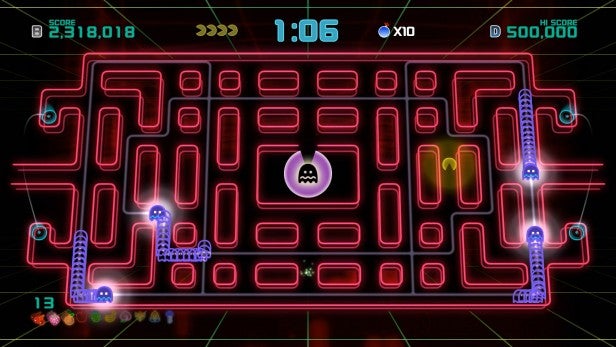 There are loads of levels, too, meaning Pac-Man has serious longevity and incredible depth. When it sinks its claws in – and for most people it will – it’s hard to get away.

If you like fast gameplay where lightning reactions will constantly serve you well, then games don’t come much better than this.

Pac-Man Championship Edition 2 may have a few additions for the sake of it, but it’s still one of the best score-attack games you could hope to play.