What is the Ozone Strike Battle?

Mechanical keyboards may be the latest must-have for gamers and typists alike but they’re generally not much cop if you like your keyboards compact. Enter the Ozone Strike Battle, a ‘tenkeyless’ – with no numeric keypad – mechanical keyboard that has a footprint little larger than a wireless Mac keyboard.

It’s a fully-fledged enthusiast keyboard too, with multimedia keys, gaming macro support and full backlighting. Is it the ultimate keyboard for those with tiny desks or even for road warrior typists? Let’s take a closer look.

The Strike Battle really is striking. The keys run right to the edge of the base upon which they sit, making it just 350mm wide by 123mm deep. It’s slim and very light too, at just 35mm and 685g.

In comparison, a more conventional tenkeyless design such as the Corsair K65 is about the same width at 365mm, but much deeper at 166mm, and thicker at 37mm plus it weighs 860g. Meanwhile the Logitech G710 – a full-size, all-the-gadgets gaming keyboard – is 508mm wide, 220mm deep, 38mm tall and a whopping 1.4kg.

As such the Strike Battle really does feel small enough to chuck in a backpack. It’s still too thick to have in your laptop case, but it’s almost certainly a more practical solution that investing in a laptop with a mechanical keyboard built in, such as the MSI GT80 Titan.

The styling works well too. The top surface is aluminium in either red or black, while the bottom section is plain black plastic. Along with matt black keys and red backlighting it creates a simple, cohesive look. The colour choice and logos clearly still mark it out as a gamer’s peripheral rather than something to accompany a sleek new MacBook, but it’s understated enough as these things go.

When it comes to build quality, despite the aluminium top it doesn’t make the same impression as the Corsair K65 which has a thick sheet of aluminium that really gives off a premium vibe. Here, though, it’s not immediately obvious it’s even metal, and a closer inspection reveals it to be rather a thin sheet bent into shape. It also has some fairly crude machining to the bevelled edges. It’s not bad quality but neither does it exude the premium feel you might hope for. 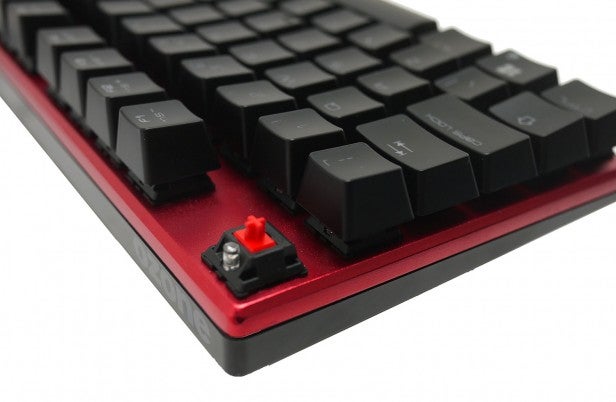 Also, one thing to be wary of is how easily the keys can be removed from the switches below. Like all such mechanical keyboards, the Strike Battle’s key caps can be pulled off for replacement either of the key cap or the switch. Here, though, they are markedly easier to remove than on other models we’ve used and so you’ll have to be careful when transporting the keyboard as in case some keys get snagged on a bag and go flying.

The issue would appear to be down to the key caps being built either purposefully looser than is typical or that they’re simply lower quality ones not built to particularly fine tolerances. We’d take a guess at the latter as some of the keys also have poorly finished bottom edges. It’s nothing to be hugely concerned about but if you were wondering where costs were being saved, now you know.

The cable is a sufficient 1m long and is nicely braided with a good reinforcing section where it meets the gold-plated USB plug and the keyboard chassis. In an ideal world Ozone would’ve used a removable cable – as the Corsair K65 does – for even easier transportation and insurance against broken cables, but that is a fairly rare feature.

The core of this keyboard is a tenkeyless layout which consists of a standard UK layout with the whole numpad section chopped off. This means those who regularly enter lots of numbers into databases or spreadsheets should probably steer clear as it’s much quicker and easier to do this with a numpad. For all other users, though, it’s a great compromise of space saving and convenience.

Below the key caps, the key switches are the standard modern mechanical choice of Cherry MX. These are extremely long-lasting, high-performance switches that we’ve found can improve typing speed for experienced typists as well as ensuring consistent performance for years. In comparison, cheaper rubber membrane or dome-switch keyboards (your standard cheap keyboard) tend to wear out, with heavy users seeing key response drop off after little more than a year’s use.

The usual choice of Cherry MX switches is available, with Blue, Brown and Red all listed on Ozone’s website, though currently availability is limited and Ozone’s own online shop is down, so exactly what choices we’ll have isn’t yet clear.

Each key also houses its own red LED for backlighting the key cap. the construction of the keyboard is such that the LEDs are actually clearly visible below the key caps, but despite this the light bleed isn’t too bad. the overall quality of the backlighting is pretty good too. In fact we particularly like the way the lock keys are only illuminated when activated, eliminating the need for separate indicator lights.

As well as your standard keyboard functions this keyboard also has a few extras up its sleeve. The right Windows key has been replaced by an O3 key that is used to activate other secondary functions. These include your more typical multimedia keys (F5 to F12) as well as gaming macros (Insert to PgDn), a G-mode function for switching off the Windows key (Print Scr), adjusting backlight brightness (Scroll Lock) and adjusting response time (F1 to F4). 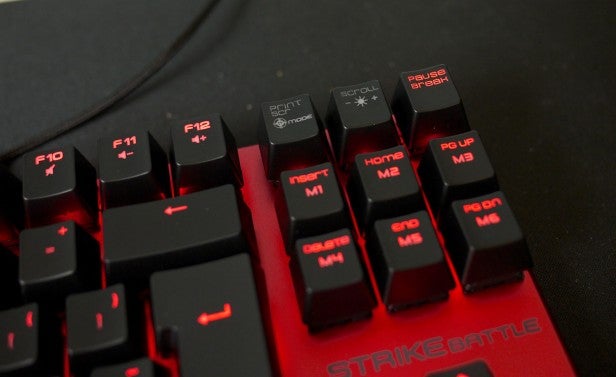 It’s an impressively comprehensive selection to fit into such a small keyboard and one that doesn’t feel confusing either – almost every feature feels sensibly placed.

To get the most out this keyboard you’ll need to download its driver, which rather stupidly comes compressed in the RAR format. While common enough, it’s still a format that isn’t natively supported by Windows so requires the downloading of a 3rd party app. Instead, a zipped file, or even a non-compressed one will do fine – at 6.2MB uncompressed it’s hardly a large chunk of data.

Once unpackaged, though, it’s a fairly tidy, lightweight driver with the usual features such as backlighting setting, polling rate, and macro recording. All the keys can also be completely reconfigured, making it easy to have the keyboard set up as you like for different games and apps – up to five profiles can be stored at once.

Of course all these features would be for nought if this keyboard didn’t perform its most basic duties well, but rest assured it passes with flying colours. The Cherry MX key action is as excellent as ever and the combination of clear key labelling, excellent layout and a stable platform really make it a joy to type on.

You’ll probably want a nice padded wrist rest for prolonged periods of typing, as despite the compactness of this keyboard, it’s still quite tall compared to a low-profile model, but we tend to find we need one anyway, even on larger keyboards that include their own token wrist rest. 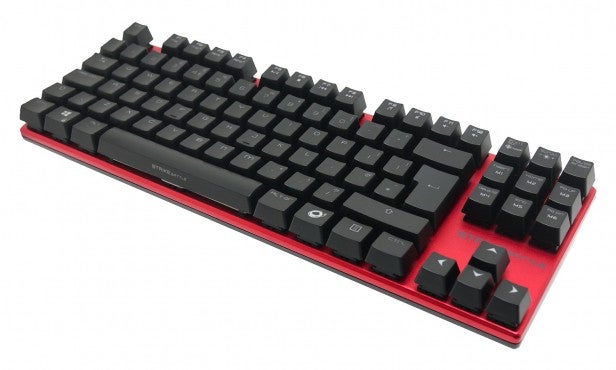 Should I buy the Ozone Strike Battle?

You may think that a couple of centimetres here and there doesn’t make a huge difference on a mechanical keyboard, especially when you’ve already saved a huge amount of bulk by getting rid of the numpad. However, the Strike Battle really does feel that much more like a keyboard you could carry around in your bag compared to most tenkeyless mechanical models. Not to mention it saves a lot of desk space.

As such, if you’re in the market for just such a keyboard it is definitely worth considering. The only downside is the overall build quality, which is a definite step down from more established brands. For the most part this won’t affect performance – the switches are still proper Cherry MX after all – but we have a few concerns about exactly how well the chassis would survive and how many keycaps you might lose if you were to use this as a keyboard for travel.

We’re mostly won over by the Ozone Strike Battle. It may not be entirely suited to a life on the road but its compactness certainly makes it better than most while its overall performance is excellent.