Overcooked 2 is a co-operative cooking game in which up to four players must work together to cook up orders in some of the world’s most poorly thought out kitchens. As the finest chefs in the land, you must acquire, prepare, and cook the correct ingredients to craft delicious meals for a discerning clientele consisting of equal parts hungry customers and ravenous zombie bread. Overcooked was a scrumptious bite when it dropped back in 2016, but is it worth coming back for sequel seconds?

When the Onion King inadvertently summons the Unbread while attempting to a cook a recipe from the Necronomnomicon, your team of intrepid chefs must once again band together to save the world. You must travel across the lands, picking up new cooking techniques and learning to co-operate under extreme circumstances. Only with these skills will you be able to curb the rising Unbread horde.

Overcooked 2 doesn’t deviate too much from the recipe laid down by its predecessor. You and up to three friends must work together to deliver orders as they come into the kitchen. Ingredients must be chopped, mixed, and cooked before being plated up in the correct combination and served in a timely manner. You also have to wash dishes to ensure a constant supply of plates to serve meals on, along with the occasional bit of firefighting when things go pear-shaped. 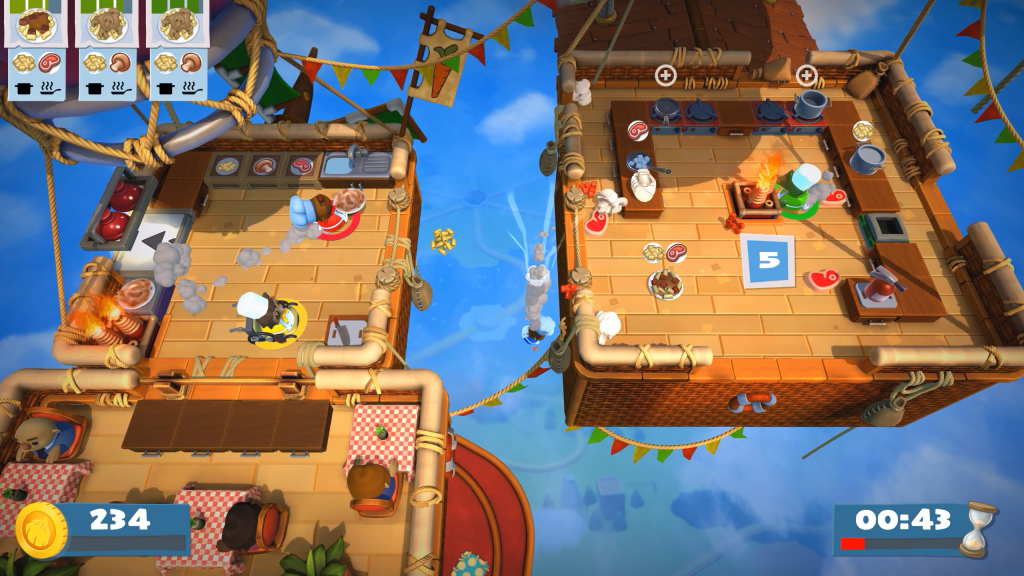 There are a host of new recipes to rustle up, supplementing those which carried over from the first game. New meals such as sushi, cakes, and dumplings join returning classics like burgers, pizza, and salads. A lot of these meals are functionally similar to existing meals when you boil it down though – sushi and burritos appear different, but you’re still throwing cooked rice and a filling into a wrap either way. Despite this, the smorgasbord of recipes and the regularity at which new meals are introduced means you’re unlikely to tire of repetition.

Speaking of salads, they aren’t the only thing you’ll be tossing in Overcooked 2 thanks to the addition of a throwing mechanic, allowing you to hurl ingredients across the kitchen and even directly into pans. Chef Ramsey might not approve, but hurling a handful of rice across the kitchen into a pan is quite effective. The throwing mechanic plays into some of the later levels, where players can be separated from each other and certain cooking utensils by impassable gaps.

Your adventure takes you across six areas, each of which contains six missions designed around a particular theme. The original Overcooked stole all the classic themes, so you won’t find any fire or ice worlds here. Instead, Overcooked 2 introduces some more unique settings for its culinary challenges, including hot air balloons, haunted swamps, and abandoned mines. 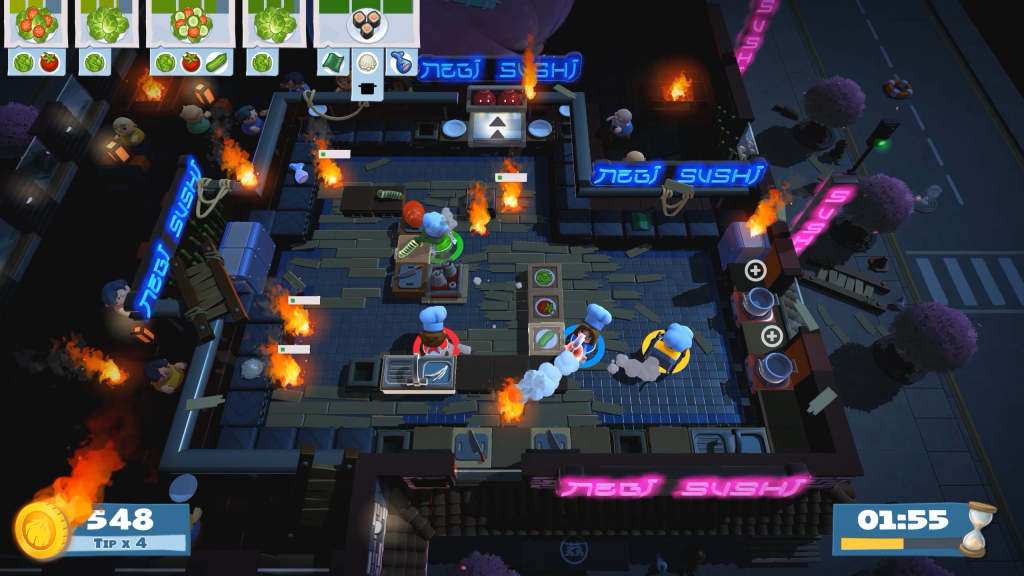 Each world offers up its own unique set of challenges which must be overcome. The levels start out in typical kitchens, but things quickly descend into madness. In the ravenous rapids area, the kitchens are spread across multiple separate rafts, with neither raft containing everything it needs to complete a meal.

This forces players to co-operate as they throw ingredients over to be chopped, before hurling them back to be cooked. Similarly, the ingredients are loaded onto moving minecarts in the mine levels, meaning players must juggle different roles depending on what tools and ingredients they have at hand.

The grand finale of this cooking adventure is an extensive and elaborate cook-a-thon in which the players’ skills are tested to their limits. You’ll need to face almost every obstacle and cook every meal throughout this epic final encounter. It’s incredibly well designed from a gameplay standpoint, testing your mastery of the skills you’ve learned along the way, but it must be said that it’s a little underwhelming aesthetically.

In the first Overcooked, the serving stand was replaced by the insatiable Flying Spaghetti Monster which you had to stuff full of delicious food. Overcooked 2 replaces the figurehead of the Pastafarian religion with some vaguely-threatening zombie toast hanging around the outside of the level, which lacks the same impact.

Alongside the main campaign, there are also arcade and versus modes for players to sink their teeth into once they’ve finished the main course. Versus puts a nice spin on the formula, pitting chefs against each other to see who can deliver the most meals in a time-limit. There’s an honest charm to Overcooked 2, carried by its adorable cast of playable chefs and the idiotic, but ultimately loveable Onion King. His dog, Kevin, provides the basis of a lot of the humour in Overcooked 2, communicating in barks that only the King himself understands. If our layered liege’s translations are to be believed, Kevin is one sassy little canine who has very little faith in your team.

The various playable chefs cover a whole spectrum of races, genders, and species to ensure that there’s an avatar for everyone on offer – the inclusion of a wheelchair-rocking raccoon is an especially nice touch for disabled gamers looking for a little representation in their gaming lives.

Only a handful of chefs are available at the start though, so you’ll have to progress through the game to unlock the full roster. There is a tiny fly in the soup of character selection though – you have to back out to the main menu to change your character now, where previously you could choose at the start of each level.

If there’s a major criticism that can be levelled at Overcooked 2, it’s that the challenges can often promote delegation more than co-operation – every kitchen needs a head chef after all. Social dynamics being what they are though, one person is likely to fall more naturally into this role within every social circle, and it can quickly become tiresome listening to some jerk order you around the kitchen screaming for more clean plates and chopped mushrooms (it’s me by the way, I’m that jerk in my circle). The solution is to assign a different head chef for each level, giving everyone that sweet taste of leadership. 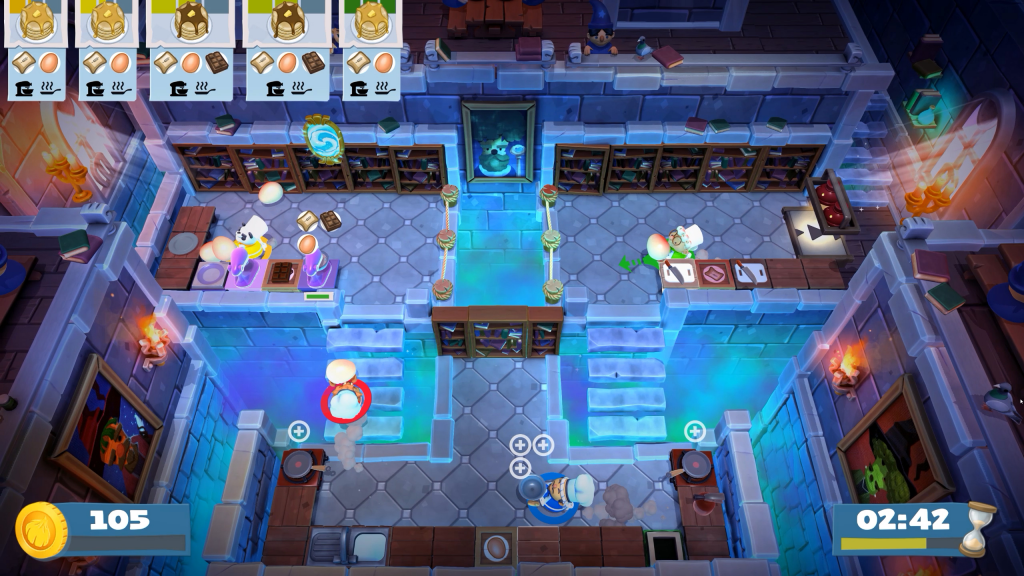 Of course, if you’d rather eschew teammates altogether, Overcooked 2 does have a microwavable dinner-for-one option, allowing you to play in single-player co-op. Here you control two separate chefs, with a button to swap between them. To balance this mode out, tasks like chopping take considerably longer allowing you to set one chef going and then jump to the other to give them a task.

It’s functional, if a little bland. The apt comparison is playing football with your mates versus kicking a ball against a wall; there’s some fun to be had, but it’s just not the same. Ultimately, Overcooked 2 is a co-operative party game and as such, it’s best enjoyed with friends.

Overcooked 2 provides just enough new ideas and content to serve up a delightful second helping. The charming visuals and low-key humour serve to counterbalance the devilish co-operative challenges on offer. The core gameplay has benefitted hugely from the simple addition of a throwing mechanic and the new levels are centered around wringing every morsel of flavour from the concept. And as Kevin himself put it, “Bark… Bark”. Wise words indeed.