What is the Overclockers Titan Virtual Force?

The world of virtual reality has reinvigorated an already interesting custom PC market, and the Overclockers Titan Virtual Force is the UK-based system builder’s attempt at a one-stop PC that will run both this and next-generation VR games.

Video: Trusted Explains: What is VR?

As standard, the Virtual Force uses the Phanteks Eclipse P400 chassis – an excellent mid-range case that has ample room for components as well as some capacity for upgrades. In our build, Overclockers has opted to light up the case with a strip of green LEDs. A £22 optional extra, those who wish to make a statement will appreciate their inclusion, with the strips matching the green LEDs of Nvidia’s GeForce GTX 980 Ti graphics card.

The case looks great; it’s available in a gun-metal finish. It has classy-looking curved edges and a full-size perspex window on the side so you can view your build easily. However, in comparison to the features often seen on cases for gaming PCs, that single window makes for a more understated overall design for a gaming build. 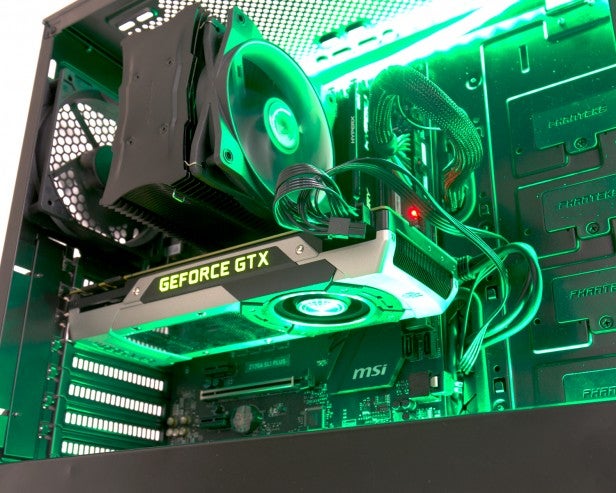 One slight downside of the case is that the front panel is far too easy to remove. Take extreme care when first unpacking the PC: if you grip the unit by the front panel and it comes away, you’ll likely drop your new pride and joy and could cause damage as a result. I escaped, just, but it was luck that saved Overclockers’ PC from falling to the floor.

The case itself has a few expansion slots, with an extra 3.5-inch hard disk slot and two slots for 2.5-inch drives. The motherboard, meanwhile, has two free RAM slots, which you’ll probably want to fill (more on that later).

The build has been undertaken with a reasonable amount of care, with few cables trailing beyond their designated ports. There aren’t any braided or coloured cables, which would have been a nice addition, but there’s very little to complain about in this regard.

The Titan Virtual Force is kitted out with all the components you could wish for in a high-end gaming PC. The motherboard is an Asus Z170-E, with a top-end Intel Z170 chipset and all the ports, connectors and overclocking features needed for a performance-orientated build. 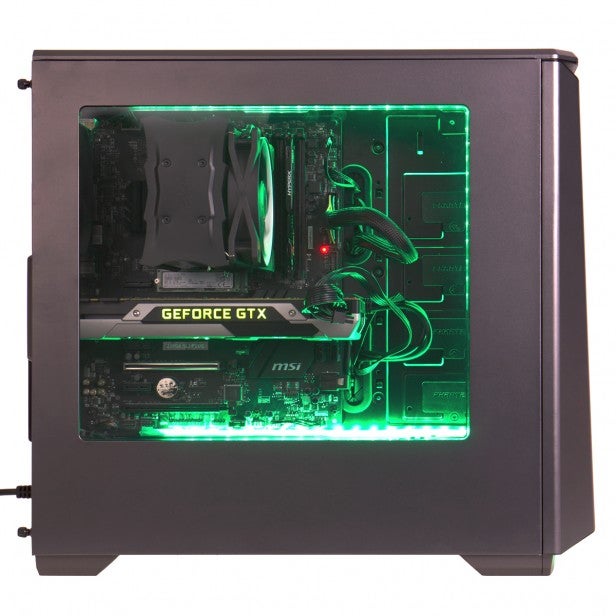 The PC comes with a total of four USB 3.0 ports: two are connected to the front of the case, and a further two on the motherboard at the rear. There are two USB 2.0 ports at the rear, too, and a USB 3.1 Type-C connector for high-end peripherals with big data transfer demands. There are enough here for a full VR setup, although it must be said if you have a wired keyboard and mouse alongside your VR kit, you’re going to be running very short on rear-facing ports and might have to occasionally resort to using the front USB ports for some peripherals.

The board also has an M.2 connector for top-end SSDs, which has been filled by the 128GB Samsung PM951 in the default specification recommended by Overclockers. Here I make my first gripe about this machine. While the addition of  such a high-performance system drive – I saw near 1GB/s write speeds – is welcome, 128GB isn’t enough space on which to store a full library of games. As a result, you’ll have to resort to the secondary 1TB Seagate hard disk for most of your games and other content.

The board has four RAM slots, of which two are filled by two 2,400MHz, 4GB DDR4 RAM modules. Again, I’m left a little wanting here, especially for a PC that should be future-proof. I’d strongly recommend doubling up your RAM at checkout and opting for a full 16GB. Considering this is only £20 more, this is a worthwhile upgrade.

Processing performance comes from a quad-core Intel Core i5-6600K. This chip, which normally boosts to a maximum of 3.9GHz, has been overclocked to 4.5GHz. Combined with the SSD, this makes for exceptionally snappy performance in everyday Windows tasks and means this processor will handle any game you throw at it.

The processor scored an excellent 5,677 in the PCMark Creative benchmark, proving it’s also very adept at high-end processing tasks such as video rendering and photo editing. Thankfully, despite the overclock, I didn’t have any issues with overheating or throttling; the huge – and slightly ugly – Alpenföhn Matterhorn CPU cooler does a great job of quietly keeping the processor running at acceptable temperatures.

The graphics card in my review unit was a 6GB Nvidia GeForce GTX 980 Ti coming in standard Nvidia reference form, although at checkout you can opt for a different – and slightly cheaper – version by MSI if you want to save £10. 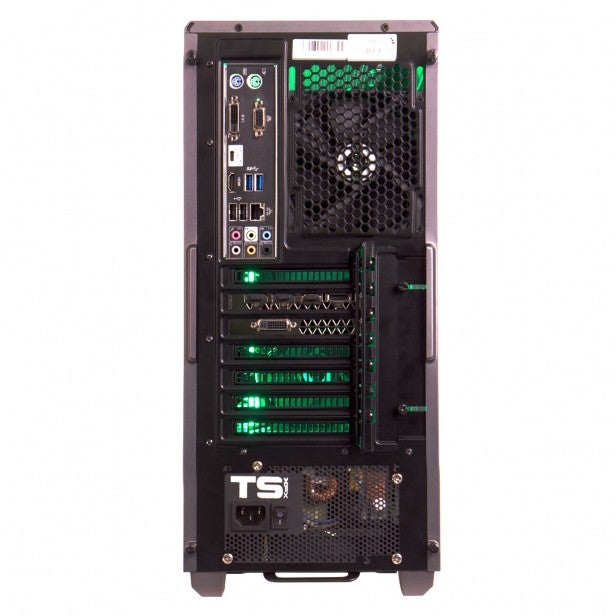 Despite now being superseded by the brand-new GTX 1080, the 980 Ti is still an excellent card and it remains one of the most capable when it comes to 4K gaming and VR. In our tests, the 980 Ti can still achieve some superb scores at high settings with the latest games in Full HD and 4K.

In our standard gaming benchmarks, the Titan Virtual Force performed impressively, delivering an average frame rate of 146fps in Dirt Rally at Full HD and 127fps in Shadow of Mordor.

We can’t benchmark in VR yet, but we used the Titan Virtual Force as our main test PC when we reviewed the Oculus Rift and HTC Vive, and it managed exceptional performances in the dozens of titles we threw at it.

Should I buy the Overclockers Titan Virtual Force?

A well-specified gaming PC with excellent gaming performance, the Titan Virtual Force is a great buy for someone looking to commit to VR gaming. The only potential snags are the new Nvidia GeForce GTX 1080 and GTX 1070 graphics cards, which outperform the 980 Ti in this specification. Overclockers have said that, when they’re available, these GPUs can be fitted to the Virtual Force. With that in mind, it’s up to you whether you wait until they’re available or your take the plunge now.

You may also want to switch out the primary storage drive for something that offers more capacity; the 128GB drive in the default specification isn’t really enough, and the same goes for 8GB of RAM.

With top-notch processing performance and plenty of graphical grunt, the Titan Virtual Force is a superb VR buy.