What is the Overclockers Marvel 4K?

The world of PC gaming is agog over 4K, since the mighty 3,840 x 2,160 resolution allows for huge graphical detail alongside an all-important leg-up for console gamers locked to 1080p. Most of the time, though, 4K gaming has one huge barrier to entry: cost.

Stoke-based system builder Overclockers has addressed this issue with its Marvel 4K. This machine costs less than £800, but the firm still reckons it has the grunt to play games at 3,840 x 2,160.

With the Marvel 4K, Overclockers has pushed its budget towards the area that matters most: the graphics card.

This is great news in terms of frame rates, but it means this system is basic in other departments. The Cougar Spike case is functional but lacks features and an attractive design. The exterior is clad almost entirely in black plastic, and the patterned section on the front panel looks loud and immature. Build quality is only middling: the side panels are made from flimsy metal; the plastic on the front flexes too much; and the roof feels thin.

The PSU hangs at the top of the chassis with the motherboard beneath, and the bottom of the enclosure is dominated by the huge graphics card – the Asus unit runs across almost the entire width of the case. 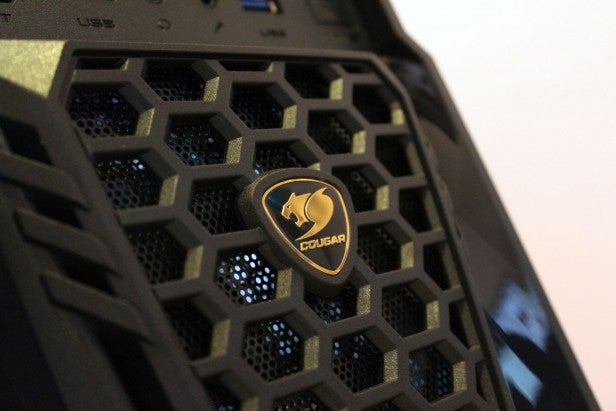 A cage emerges from the front of the case to hold storage and optical drives. There’s room for one hard disk and two 5.25in devices, and they can be installed without tools. But the hard disk bays don’t face the side of the case, which makes access tricky. There isn’t much upgrade room elsewhere, either: a visible PCI Express x1 slot is tricky to reach below the graphics card, and there are no extra memory slots.

Overclockers has succeeded in keeping the machine orderly, at least. The larger power cables are tied together and attached to the metal in the middle of the case, and smaller wires are attached to the bottom of the chassis and aren’t visible beneath the graphics card. The tidy build makes for good airflow, with air able to flow between the front and rear 120mm fans with little interruption.

It’s a minimal build, which is no surprise – the Marvel 4K is all about its graphics card. This opens the door for rivals, however. The Alienware X51 and Syber Vapor I are both smaller, smarter and sturdier than the Marvel. The Syber machine even includes a better selection of ports.

The Marvel’s key component is its AMD Radeon R9 390X. It’s as powerful as AMD chips get before they bear the Fury branding, and its specification is impressive. It takes the Hawaii core from last year’s card and tweaks it, improving the 1,000MHz stock speed by 50MHz. It also has 8GB of GDDR5 memory at 6,000MHz – twice as much memory as the older chip, and at a higher speed.

Overclockers hasn’t used any old R9 390X, though. It’s chosen a Strix version, built by Asus, which has several enhancements. The Radeon’s base clock of 1,050MHz has been improved to 1,070MHz in order to eke out a few extra frames from the core. The card has three fans that shut down if the GPU temperature doesn’t rise about a certain level, and its logo has LEDs that illuminate the case through the meshed side panel.

Other components are more modest. The Intel Core i5-4460 is a Haswell part that’s technically two generations out of date. It doesn’t benefit from Skylake’s improved architecture, and its four cores don’t have Hyper-Threading. The stock speed of 3.2GHz isn’t enhanced with overclocking, and the chip’s Turbo Boost peak of 3.4GHz looks weedy when compared to newer chips.

It’s enough processing power to handle consumer applications, and it doesn’t bottleneck games – but it’s no Core i7.

Eight gigabytes of DDR3 memory is enough for a gaming PC, but it’s clocked to 1,600MHz – a little sluggish compared to the 1,866MHz chips that are common. It’s the same story with the storage: there’s a 1TB hard disk, so plenty of room for games, but no space in the budget for an SSD. 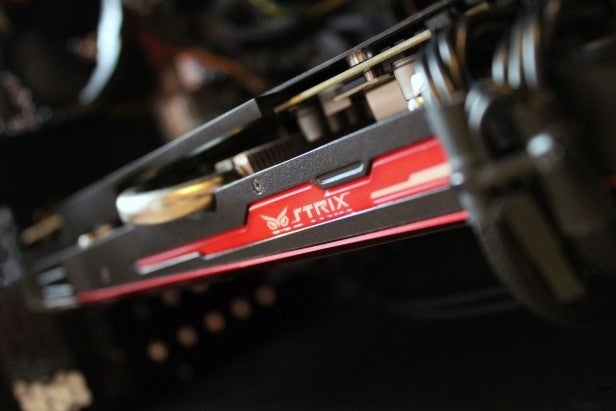 The Asus H81M-Plus motherboard is a micro-ATX product that covers the basics while keeping extra features to a minimum. The backplate, for instance, isn’t generous: it has only two USB 3.0 ports but makes do with four slower USB 2.0 connectors, and there are only three audio jacks.

The board has memory slots that can handle up to 16GB of DDR3, but there are only two of them and they’re already occupied. There are two PCI Express x1 slots, which are handy for upgrading, but one is hidden behind the graphics card and the other is tricky to reach. Storage upgrades are limited: there are three free SATA connectors, but they’re all difficult to reach and two of them use the slower SATA II standard.