This brings us onto the vital topic of games. And, unless you’ve lived under a rock these past few weeks, you’ll have already heard plenty about the lack of real quality games on Ouya. We alluded to it in our initial hands-on, and a couple more weeks using it has done nothing to change our minds on the matter.

More to the point, it lacks decent exclusive games. Most of its best games, such as Vector HD, are conversions of mobile games; likewise its high-profile capture of Final Fantasy III. Much as it would be nice to say otherwise, good exclusives sell consoles – it’s why Sony and Microsoft invest so much money in them. Ouya could live without them, but not without a much stronger foundation of good ‘cross-platform’ games.

This lack of depth alone makes it very hard indeed to recommend Ouya right now, but the Ouya’s implicit hackability is the carrot that might keep people interested. On the one side you have legally and morally fuzzy arena of emulation. There are emulators for more or less every historic console going, which is reason enough for some people.

The other is the ability to side-load Android apps and games. There’s already an Alpha version of the popular XMBC media center app for Ouya, and there’s an official version of the Plex rival. There’s an official version of Flixster, too, which means you can watch digital versions of Blu-ray films you’ve bought that support the Ultraviolet film locker system. Side-loaded apps that work well-ish, meanwhile, include BBC iPlayer, TVCatchup, Netflix, Hulu (US only), Dropbox, uTorrent, Google Chrome… the list goes on.

Of course, it’s here that the touchpad on the controller starts to make sense, as it acts as a substitute for a touchscreen. A seamless experience it is not, but it’s better than relying solely on the analogue sticks.

Most of these experiments in side-loading apps are fairly rudimentary, but Ouya has some potential as a low-cost, flexible and hackable media center device. 1080p video plays just fine, and the Ouya’s size and price are living room friendly. Moreover, in time such experiments are bound to morph into more officially endorsed ‘native’ Ouya apps.

None of this is an adequate replacement for a better game library, but at the very least there’s more to the Ouya than games alone. 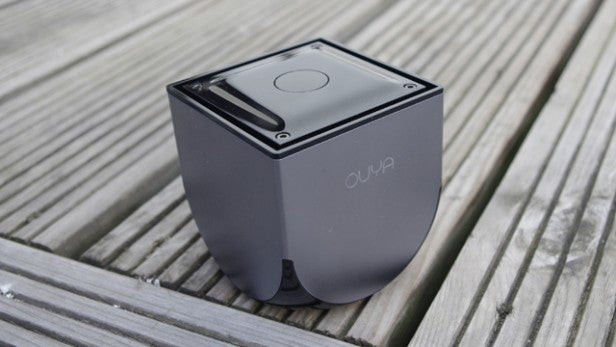 Should I buy an Ouya?

There are two arguments to make here. The entirely rational, sensible answer is clearly no, you shouldn’t. Ouya is too rough around the edges and the games simply aren’t there. That’s why it gets 5/10.

But for all its faults, there’s potential. The fundamental premise is still a good one, but like any new venture Ouya has much work to do to fulfil it. For that reason alone, it’s still worth supporting and anyone who likes tinkering with software and/or hardware should consider one.

The killer argument against it, however, is Ouya has already committed to yearly updates just like those of tablets and phones. That makes perfect sense, but it’s another reason to wait for the next version that (we hope) will round off the edges of this interesting, if at present flawed, concept.

Ouya is still a curio rather than a prime-time ready games console. It has bundles of potential, but only ardent fans and hobbyists need apply right now.