Depending on your point of view, either Ouya is the saviour of independent game development or it’s the latest high-profile flop to come out of Kickstarter. Made famous by its incredibly successful Kickstarter, where it raised over $8.5 million, Ouya is an Android-based, open source games console that runs on an Nvidia Tegra 3 mobile chip. Imagine if an Apple TV played games, as it could well do in future, and you get the idea, albeit without all of Apple’s restrictions. It’s an intriguing concept, but is it one worth buying?

Already own an Ouya? Take a look at our best Ouya hacks and mods round-up.

There’s something almost iconic about the Ouya
console’s design. Perhaps it’s the size, but it just looks damn cool.
Its silvery metal body does no harm, while the four exposed screws at
the top give it an industrial look and feel that hints at its
homebrew-ish outlook.

There are numerous software hacks that
we’ll get to later, but the hardware is similarly moddable – as our Best
Ouya hacks and mods feature proves. Enterprising people have already
made various tweaks, such as installing a quieter fan, and there’s bound
to be more.

While on the topic of the fan, it’s rarely
obtrusive – it only spins up mid-game, and isn’t loud enough that it’s
heard over the game you’re playing. Indeed, we’re not sure why a quieter
fan is necessary, but each to their own. 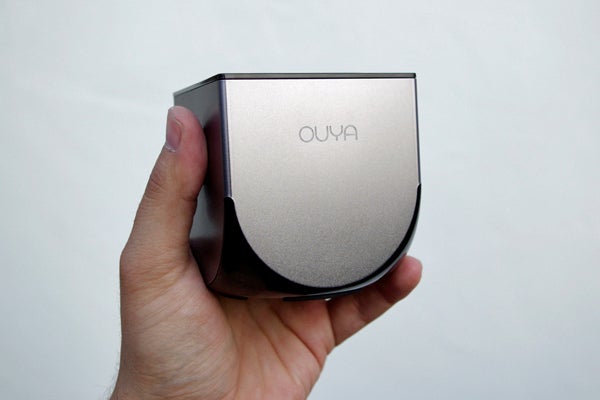 Inside, Ouya is powered by an Nvidia Tegra 3 chip; it’s the T33 variant with a 1.7GHz ARM A9 quad-core processor and 1GB of RAM. This is far from the bleeding edge of mobile processors, especially now we’ve seen the Sony Xperia Z Ultra and its Qualcomm Snapdragon 800 system on a chip perform so well in the 3DMark 11 benchmark. But few games push it hard and it plays a large part in keeping Ouya’s price down to palatable £99 with one controller included.

(It’s worth noting, however, that it’s $99 in the US. If Ouya wasn’t a plucky start-up, we’d be seriously hacked-off, but we’ll give it the benefit of doubt in this case.)

There’s 8GB of internal storage, which should be ample for games and apps, but there’s a USB port should you need to expand it or load external apps and games. There’s 802.11n Wi-Fi built-in, though it only supports the 2.4GHz band, not the less congested 5.0GHz band. 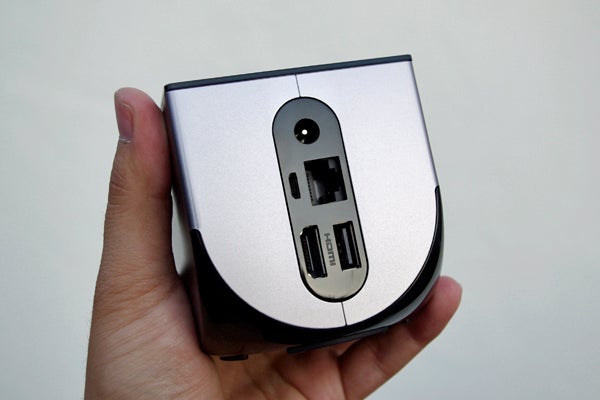 Joining the USB port at the rear is an Ethernet port, HDMI and a Micro USB port. There’s Bluetooth built-in for pairing with the wireless controller and other Bluetooth compatible accessories.

The Micro USB port is for connecting your Ouya to a PC – a vital feature for any potential developer. Indeed, it’s a vital feature to the whole concept of the Ouya. Unlike an Xbox or PlayStation that require dedicated ‘dev consoles’ to test games on, every Ouya sold is a developer console that’s ready for anyone to tinker with.