Back in the days of my admittedly misspent youth, there was nothing quite like climbing aboard the fully hydraulic OutRun machine in the Oxford Street amusement arcade in London’s West End. Anyone who remembers the arcade in question will know that OutRun was the crowd puller – positioned right by the entrance, almost on the pavement, OutRun was the game that made passers by stop dead in their tracks and start searching their pockets for pound coins.


I loved playing OutRun – not only because it was a great game, but because I was very good at it, and as soon as those passers by realised I was going to finish the game, the crowd around the machine would grow and grow. How could I not love the nods of acknowledgement from other players, the requests for hints and tips from rookies and the general admiration from bystanders who didn’t even play video games, but could appreciate the achievement. 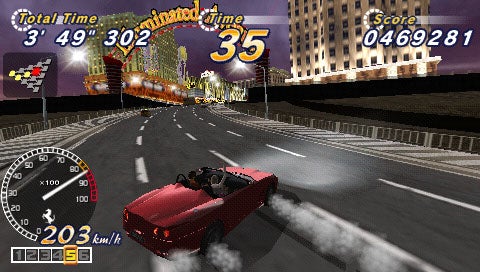 I dread to think how much money my friend Jon and I piled into OutRun machines, probably enough to buy one in the end, but it definitely seemed worth it at the time. Being able to finish OutRun via every possible route seemed very important back then. I guess the chance to drive a Ferrari Testarossa Spyder (even though Ferrari didn’t actually make one) at high speed cross country had an undeniable appeal.


Unfortunately the funny thing about nostalgia is that it comes with a pair of very rose tinted glasses. All too often those movies, TV shows and even video games that we remember so lovingly from our youth don’t stand up to the test of time, leaving us to wonder why we thought they were so great in the first place. But every once in a while you’ll find that when you revisit the past, not only is it as good as you remember, but it’s actually better. Thankfully, OutRun is one of those rare instances, and that’s a good thing because Sega hasn’t changed much from the original formula with OutRun 2006: Coast 2 Coast. 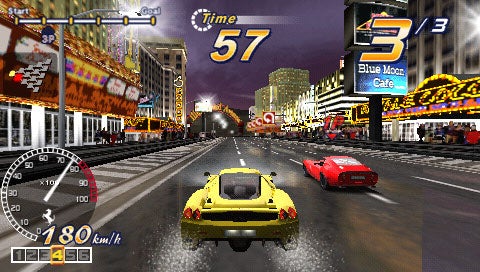 Firing up OutRun 2006 on my PSP instantly sent me back in time to my arcade machine playing days – hit the start button, select Magical Sound Shower on the radio (I never listened to anything else), wait for that classic Sega “Get Ready” and hit the gas! Ok, so you can’t quite hold the revs in the upper green limit before nailing the accelerator like you could with the arcade machine, but that aside it’s déjà vu all the way. Then just wait for the first time you hear the word “Checkpoint” as you cross to the next stage – it’s enough to make the hairs on the back of your neck stand up, if you were an OutRun player that is.


The great thing about the OutRun arcade game was its simplicity, and although there’s a lot more depth to this updated version, it feels as simple and easily accessible as the original. Like most racing games, there’s a single player career mode where you have to achieve goals in order to progress, but you can happily ignore that and just play the classic “OutRun Mode” to get a fix of nostalgia. 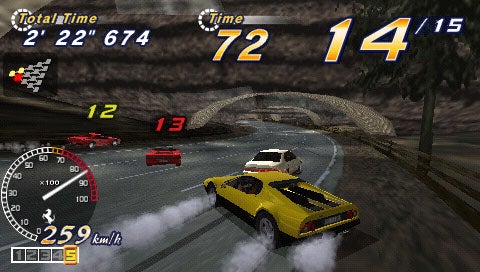 Unlike the original game, you’re not limited to a single Ferrari – this time around you have a whole host of prancing ponies at your disposal. Of course the original Testarossa is there, but any Ferrari fan will tell you that this wasn’t one of the best vehicles to roll out of Modena. Worry not though, there are some absolute classics on offer, including a couple of my own favourites – the Daytona Spyder and the 288 GTO. If you want to drive something a bit more expensive, you can always go for the current cream of the Ferrari crop, the Enzo; but if you really want to push the boat out, why not get behind the wheel of a 250 GTO – one of these sold for over £6m a few years back! 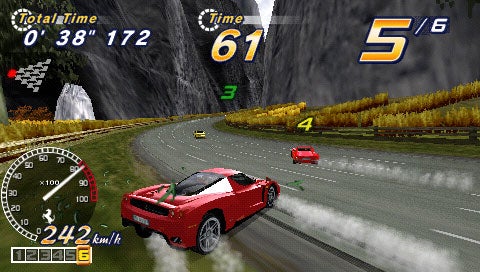 Of course if you play the single player career mode, you’ve only got a couple of cars at your disposal to start with, if you want the others you’re going to have to earn them. This is pretty standard procedure for racing games, but Sega has put its own spin on things. Most games expect you to either overcome challenges or win races to earn points that can then be used to buy new cars, but OutRun lets you buy new cars and features with “OutRun Miles”. The beauty of OutRun Miles is that you don’t have to win a race or overcome a challenge to get them. Lost the race? Don’t worry, you still get your miles. Quit halfway through the race? You’ll still get the miles you covered thus far. There’s none of the frustration that accompanies most driving games because you know that every single mile you cover, no matter what the overall outcome, goes towards your next piece of Italian exotica. 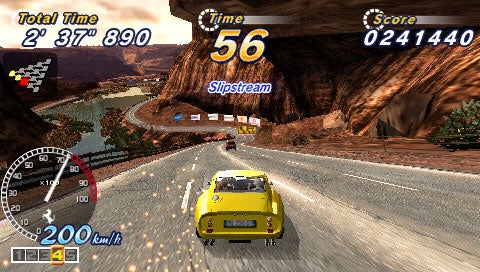 Handling can be a bit tricky at first, but once you get the hang of the ludicrous power slides, you’ll have no trouble getting around the track with your foot to the floor. Although the analogue stick on the PSP is somewhat lacking in sensitivity, Sega, or to be correct Sumo (the developer) has given you the option to tweak the sensitivity in the options menu. Unfortunately no amount of tweaking will help the analogue stick on my PSP which just snapped right off while playing OutRun – not really what I’d expect from such an expensive handheld console. A quick look around the web showed that this is a common problem though, so I’ll be buying a new analogue stick and performing surgery on my PSP as soon as I get the chance. 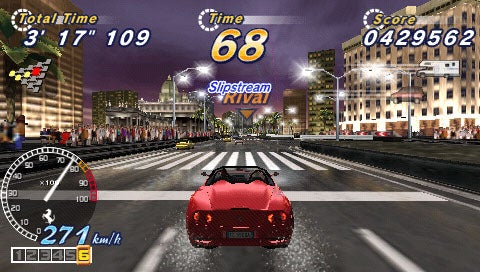 The single player mode has your average driving challenges thrown in, but it’s the girlfriend challenges that are far more fun. Here your girlfriend gives you instructions while you’re driving, stuff like “hit the cars”, “overtake cars”, “avoid the meteors” and even “dribble the beach ball” – I kid you not. All the time you’re heeding your lovely companion’s instructions, you’ve also got to remember that the clock is ticking and you have to make the next checkpoint before the time runs out.

But if the single player game is good, the multiplayer game is just brilliant. There’s something very cool about sitting in the office, playing OutRun on my PSP against five other players online. Amazingly, the gameplay is silky smooth too, with little or no lag – not bad considering both the WiFi setup and ADSL in the TrustedReviews office are not the most reliable in the world. Also, unlike playing Project Gotham on Xbox Live, playing OutRun online is fun from beginning to end. Because the gameplay and dynamics are so simple, if you crash it’s easy to get back in the race. I actually won my first ever race, despite being in last place for the majority of it. 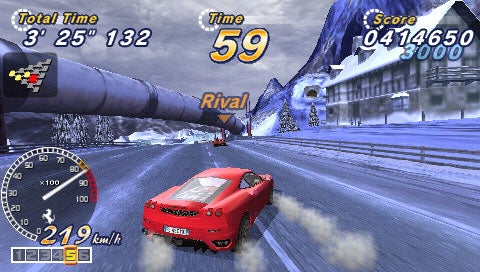 Graphically OutRun looks superb and I can’t imaging that Sega could have done a better job. OK so there are a few jaggies on show here and there, but that’s just highlighting the limitations of the hardware, not the game. The feeling of speed is convincing, and the bright and detailed landscapes are light years ahead of the original arcade machine. Likewise the sound is top notch, with all the original tunes from both OutRun and OutRun 2 – not that I listen to anything other than Magical Sound Shower of course.


Ultimately OutRun 2006 is everything that I’d hoped it would be and more – it has all the instant accessibility of the original arcade game, with enough extras thrown in to keep things interesting. If this game has a failing, it’s that players who didn’t experience the original OutRun phenomenon may not find it as instantly appealing. In fact they may even read this review and wonder why I’m raving about it, when by comparison Ridge Racers is a far more detailed and complex game. But if they spend some time with OutRun, they might just realise that not everything from the 80s is best forgotten. 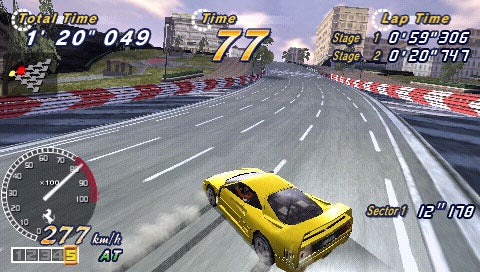 
The problem with most PSP games is that they try to be too clever, too “next gen”. OutRun 2006 may not be the best looking game on the PSP, or the most challenging, but it is great fun to play. Of late I’ve been playing my Nintendo DS far more than my PSP, because the games are just easy to pick up and fun to play. However, Sega has proved that “Fun” games can work just as well on the PSP – it has proved it with OutRun, just like it did with Virtua Tennis last year.


OK, so a game like OutRun doesn’t offer the kind of challenging longevity as GTA, but it does have that “pick up and play” appeal, especially with the multiplayer aspect. OutRun was a classic in 1986 when the masterful Yu Suzuki created it, now, 20 years later it’s a classic all over again.