What is the Otone Soundbase II?

History tells us that sequels are rarely better than the original, but we’re seriously hoping the follow-up to Otone’s disappointing Soundbase is more Empire Strikes Back than Paul Blart: Mall Cop 2. We liked the slim, attractive design and rock-bottom price of Otone’s first Soundbase, but ultimately its lacklustre performance let the side down.

This larger, pricier version makes some significant changes to the design and spec, but the idea is the same – to deliver a deeper and louder sound than your TV speakers without impacting on your space.

Remarkably, Soundbase II is even slimmer than its predecessor, measuring just 50mm high compared with 67mm. When placed beneath our 55in TV you barely notice it’s there, looking like part of the TV’s stand. That’s terrific news for clutterphobes.

On the looks front, Soundbase II should definitely be filed under ‘attractive’ but it’s not in the same league as the original Soundbase. Gone are the eye-catching pyramids on the speaker grille, jettisoned in favour of a curved mesh with the Otone logo front and centre.

Build quality is decent – the main casing has a faux-wood veneer with gloss-black trim towards the front – although at this price don’t expect luxury. It’s certainly sturdy enough to comfortably support TVs up to 50kg with a stand no larger than 600 x 300mm. Four feet lift the unit off the surface, giving the 3in down-firing subwoofer some room to manoeuvre.

The biggest design upgrade is the addition of a dot matrix LED display on the right-hand side, which indicates volume levels, sound modes and selected inputs more clearly than Soundbase’s system of lights. That said, the dots are slightly obscured by the speaker mesh, making the letters hard to read. On the side are tiny rubber volume and power buttons for up-close control.

The rear panel is very different to that of the first Soundbase – Otone has replaced the optical digital input with an HDMI input and an ARC-enabled output. That means you can hook up a Blu-ray deck or TV box directly to the unit and pass the pictures on to your TV.

The ARC HDMI output allows for a single-cable connection between your TV and the soundbase. If your TV supports ARC, it’ll send audio signals down the HDMI cable to the Soundbase II – ideal when watching programmes from the set’s built-in tuner.

In an ideal world we’d have liked an optical input too, just to cater for users without ARC-enabled TVs. A second HDMI input would have been useful too – as it stands you can only connect one external device, while any other kit has to be connected to your TV or to the 3.5mm minijack input. Built-in Bluetooth allows you to stream music wirelessly.

The Soundbase II offers 60W of power, sending 2 x 15W to the front drivers and 30W to the subwoofer. There are four EQ modes on board to cater for different types of content – Music, Movie, Flat and TV. There’s also a sleep timer and a clock function that displays the time in standby, which is more useful than it sounds.

Like all soundbases, setup is a piece of cake. Slide it under your set, hook up your chosen device to the HDMI input and run another HDMI cable between the soundbase and TV. Job done.

The only complication is ARC – setup differs from TV to TV but basically you need to activate HDMI-CEC in its menu. After that you can control the Soundbase’s volume using your TV’s remote. 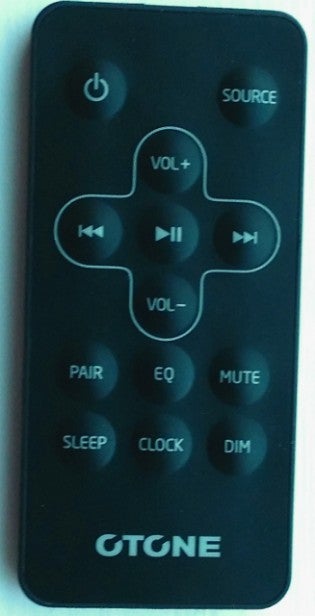 That’s a blessing because the Otone’s own remote is terrible. It’s an off-the-shelf job with horrible blister buttons that click unresponsively, and it’s too small to hold comfortably. There are buttons to select EQ mode, dim the LED display and control Bluetooth playback. The ‘source’ button at the top lets you toggle through inputs.

For the most part, the Otone turns in a decent performance, characterised by a biting tone and loud volume. It lacks refinement and control in key areas but crucially the Soundbase II goes louder, digs deeper and sounds clearer than any TV, which for most buyers is the bottom line.

Play Edge of Tomorrow’s first beach drop scene and the Otone tackles the music, explosions and gunshots with gusto. There’s a surprising amount of bass for such a slim soundbase, letting out a beefy thud when quadcopters crash into the sand and anchoring machine gun fire with a robust shudder.

Other elements are also given room to breathe. Clanking armour and splashing water sound crisp and it’s easy to hear Sgt. Farell barking orders over the booms and crashes. These qualities also make the Otone terrific for TV viewing as voices are nice and clear, even at low volumes.

That’s the good news, now for the bad. Despite a decent amount of bass, the Otone struggles to convey the scale of these epic battle scenes, and doesn’t quite fill the room like the best soundbases.

Bass is also on the flabby side, lacking the tight integration of the Denon DHT-T110 or the Crystal Acoustics Teevy 6. If you’ve only been raised on a diet of weedy TV speakers, then the Otone’s bass output will seem like a big improvement, but more discerning listeners won’t be impressed.

There’s also a hard edge to the sound, particularly when you push the volume into the high 20s (maximum is 32). When Tom Cruise shouts in protest as he’s dragged back to the barracks, the resonance in his voice made us wince slightly; the same thing occurs when the crowd cheers during football matches on TV.

You can rectify some of these issues by playing with the sound modes but there’s always a trade off – Flat mode, for instance, is a little easier on the ear but lacks impact; in Movie and TV modes there’s more bass but dialogue sounds more strident.

Perhaps we shouldn’t be surprised by these flaws – after all £170 is fairly cheap by soundbase standards – but bear in mind that you can get better sounding ‘bases for just a little more money (the Denon DHT-T110, for example, costs £200).

Should I buy the Otone Soundbase II?

The Soundbase II’s slim design, HDMI sockets and sub-£200 price tag make it a tempting proposition, but like its predecessor its sound quality doesn’t quite cut the mustard.

It’s not terrible – in fact we’re quite impressed by its loud and lively output, with clear dialogue, crisp treble and a surprising amount of bass given the slim cabinet size – but the boomy bass, limited scale and overbearing midrange rain on the parade. We’d recommend splashing £30 more on a soundbase such as the Denon DHT-T110 or the Cambridge Audio TV2.

On a more positive note, we like the discreet design, boosted by the addition of an LED display, while the inclusion of ARC-capable HDMI socketry is a welcome upgrade.

Otone’s soundbase sequel improves on the original with HDMI sockets and a slimmer design, but sadly it can’t tease out a better performance.