What is the Otone Soundbase?

This affordably-priced soundbase from British brand Otone aims to beef up your TV’s audio performance without impacting on living room space. In fact, it’s one of the most compact soundbases we’ve come across, measuring just 67mm high by 317mm deep – and at around £130 the price is equally slender. If performance is up to scratch we could have quite a bargain on our hands.

Not only is it one of the skinniest soundbases around but it’s also one of the most attractive. The potentially unremarkable front speaker mesh has been jazzed up with a stylish pyramidal texture, while the main body is coated in a fetching black wood grain finish. The curved ends and gloss black trim add little splashes of elegance to this surprisingly attractive unit – most soundbases at this price are dour-looking affairs.

There’s no display panel to be seen – all you get are four tiny lights behind the mesh that indicate which input is selected. Naturally the Bluetooth light glows blue, while the aux and optical lights on either side glow orange. The labels for these are on top, while a rubber buton panel embedded into the top surface provides source, bass, volume and standby controls.

Build quality is pretty good too – the firm, robust enclosure sits on four sturdy feet with rubber pads on the bottom. This solid structure supports TVs up to 80kg, which should cover most large screens – indeed, it happily propped up our 55in LED set – but you have to make sure the stand fits comfortably within the 653mm x 317mm top surface. 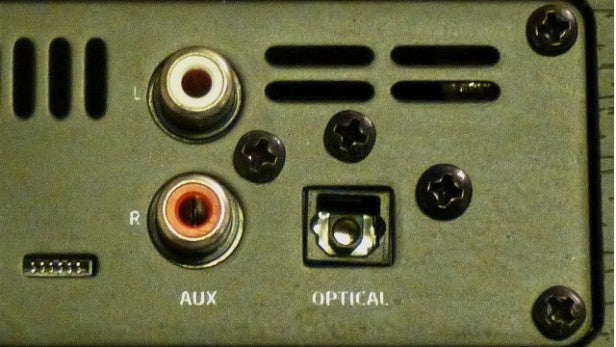 The rear panel is depressingly light on connections, which is perhaps unsurprising at this price. The only sockets on offer are optical and analogue stereo inputs, which to be fair is fine if you’re simply connecting your TV to the optical input and letting the Otone play whatever you’re watching.

But if you want to channel a Blu-ray deck or games console through the speaker via HDMI you’re out of luck – try stepping up to Otone’s Soundbase II, which comes with an HDMI input and ARC-enabled output.

The Otone makes up for the lack of physical connections with built-in Bluetooth, which provides a convenient way of streaming music from phones and tablets.

The Soundbase features two 2in midrange/high-frequency drivers and a 3in subwoofer on the bottom. Quoted power output is 60W – that’s 2 x 15W from the main speakers and 30W from the subwoofer.

The only other feature of note is the Bass mode, which gives low frequencies a boost. It’s activated using the dedicated button on the remote or on top of the unit (an orange light tells you it’s enabled). 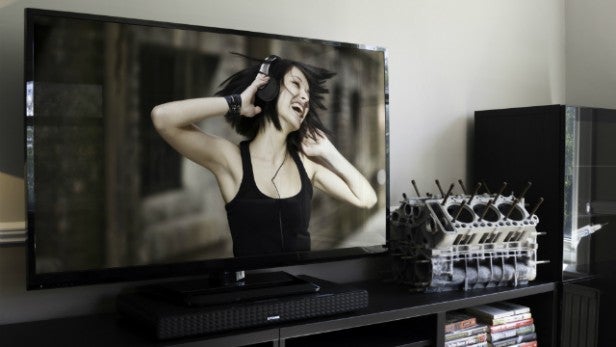 Sofa-bound operations are carried out using a slender blister-button remote that feels like it could snap in two at any given moment. It sits awkwardly in the hand and the buttons are clicky and unresponsive. They are neatly arranged and well labelled, but that’s not enough to save it from budget ignominy.

Sources can be selected by pressing the input button on the remote – it cycles through optical, Bluetooth and aux. The remote also features handy track skip keys for Bluetooth playback.

The Otone’s performance is a mixed bag. On the positive side, it musters a much bigger, louder sound than our 55in Samsung TV (which is no sonic slouch itself), giving movies and programmes much-needed oomph. Some cheap soundbases we’ve tested (such as the Sond Audio ETBT201Y) don’t even manage that, so at least the Otone fulfils the first part of its brief.

There’s a healthy amount of bass too, which gives action scenes more depth and presence than our screen’s speakers. With Edge of Tomorrow on Blu-ray for example, pounding explosions flood the room during the beach battle scenes and there’s pleasing potency behind the rattling machine guns and shouty dialogue.

In fact, vocal clarity is excellent, making conversations easy to follow no matter what’s going on around them. This also helps when watching speech-based TV shows such as the news – voices are clear and prominent.

But a number of flaws betray the budget price tag. Perhaps the biggest is the lack of detail – high frequencies sit too low in the mix, which makes the sound seem closed in and narrow (particularly when combined with the issue outlined below). We didn’t expect high-end polish and poise at this price, but a little more crispness wouldn’t go amiss.

At the other end of the spectrum, the Otone’s bass is boomy and ill-disciplined, even without Bass mode activated (which we’d leave well alone). The rumbling engine of the quadcopter that drops soldiers onto the beach is too overpowering, and although explosions are loud they’re also flabby and bloated – a better soundbase would make them tighter and punchier.

Finally there’s a touch of brashness in the midrange, particularly when you turn the volume up loud, but it’s not a major distraction.

These drawbacks put a glass ceiling on the Otone’s musical abilities. Streamed from our iPod, tracks lack the refinement and dynamic range to really dazzle, but put it on in the background at a dinner party and it’s perfectly serviceable. 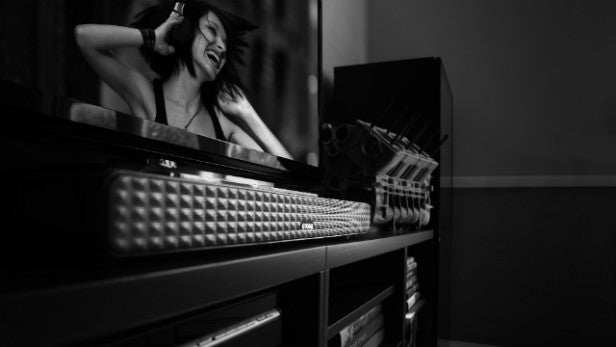 Should I buy the Otone Soundbase?

The Otone is one of the prettiest and most compact soundbases we’ve encountered, which definitely earns it Brownie points, and performance-wise it goes louder than any TV, which is fine if that’s all you want from a soundbase.

But the lack of clarity in the high frequencies, boomy bass, sparse connections and dreadful remote consign Otone’s effort to soundbase mediocrity. As the cheapest model on the market this probably shouldn’t come as a surprise, but if you splash a few more quid on the Goodmans Base, Crystal Acoustics Teevy 6 or Cambridge Audio TV2 you’ll probably be a lot happier with your purchase.