If there’s one thing extreme sports practitioners like doing, it’s showing off. Whether that stretches to the extent of the likes of Tony Hawk and Mat Hoffman, or simply means recording your weekendly adventures and posting them up on YouTube doesn’t really matter. What’s important is having proof that you are as skilled as you claim to be – it’s one thing to claim to have pulled off The 900, but only the most trusting of friends will buy the story unverified.


Camcorders like the Panasonic SDR-SW20 go some way to addressing this audience, but fall short at a couple of hurdles. For a start, waterproof and rugged though many of these devices are, they’re not really designed for attachment to, say, a helmet or a set of handlebars. 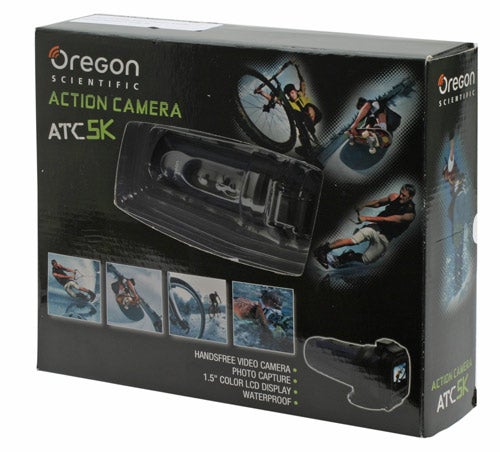 Luckily there are camcorders out there better suited for such a task. The Oregon Scientific ATC5K is one such device, offering not only the ability to roll with the punches, but also coming with a slew of attachment options which should make it a great addition to the inventory of anyone looking to record their “eXtreme” sporting activities.


Specs wise the ATC5K compares reasonably favourably with the competition at its £149.99 MSRP. Video can be recorded at either 640 x 320 or 320 x 240 (with sound) which is good enough for video upload services like YouTube, Vimeo and their ilk. Admittedly it doesn’t compete with the quality of 720p camcorders such as the Toshiba Camileo Pro HD, but they’re not going to survive an encounter with a low-hanging branch. Indeed, there is a sizeable gap between the front of the camcorder’s outer shell and its lens to help protect it from such collisions.

Because of its rugged construction, using the Oregon Scientific ATC5K is a more complicated process than it might otherwise be. The buttons are a bit clunky to use and the configuration options are basic to say the least. Pressing the menu button for a few seconds brings up your settings, while shorter presses cycle through the various options although annoyingly rather than constantly cycling through, when it reaches the end, it then exits out of the menu completely.


The ATC5K sports 1.5in LCD at the back is just about good enough to tell whether a recorded video is worth keeping or not, but as I just mentioned, it’s pretty hard to get as far into the menu as deleting a duff file without losing patience and throwing the ATC5K at a wall. At least it will survive the abuse, though.

One area where Oregon Scientific can’t be criticised is the number of attachment options supplied in the package. There’s a round clamp for handlebar attachment, a rubber strap for wrapping around a helmet, or anything else for that matter, a Velcro strap for doing the same and a mount for using the camcorder as a desk-mounted webcam (via USB).


There is also a remote control in the box which works by infra red and sports an ”extensive” two buttons, one for toggling recording and another for taking still shots. Unlike the camera itself, which is waterproof up to a depth of 10ft, the remote is simply splash resistant – although its usefulness is pretty limited anyway so that’s no real problem.


In our limited testing, all of these attachment methods worked as they should, although fixing the camcorder to the handlebar mount was definitely the best way to get cycling footage. The helmet mount, though it worked, resulted in really poor video footage due to a combination of the constant movement and relatively low frame rate. Attached to something solid, such as a dinghy’s mast should give better results.


The ATC5K comes with 32MB of inbuilt memory, which is pretty much pointless as the camcorder records to uncompressed AVI affording about 50 seconds of recording at the highest resolution. Fortunately there is an SDHC card slot – so, a 4GB card will enable a more usable maximum of two hours of video to be stored. 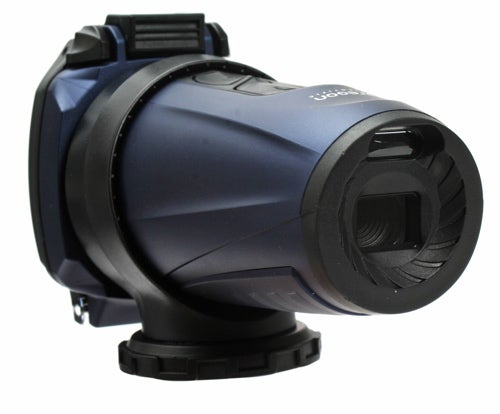 Another reason that anyone using the ATC5K will want to use SD cards is that although USB file transfer is supported, the camcorder uses USB 1 which is mind-bogglingly slow with any decent length of video. Once on a computer these files are more easily managed, and a quick run through Windows Movie Maker is highly recommended unless you have a really fast upload speed, assuming you have any intention of sharing said files on the Internet.


The quality of video form the ATC5K isn’t exactly great, but is comparable with similar cameras. That’s an especially poignant point as YouTube and Vimeo will both butcher the quality of your video anyway, as evidenced by the footage above. For those not interested in Internet video, the ATC5K also has a combined S-Video and RCA audio output, for showing off your footage on a TV. 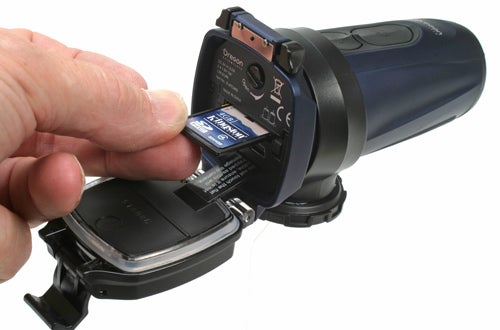 While the video recorded by the ATC5K is just about acceptable, the audio it saves frankly isn’t. At the best of times it’s poor, but as soon as the camcorder is used in the way it’s meant to be – that is, attached to something moving – it quickly deteriorates into a mess of noise.


Overall though, for its intended purpose the ATC5K delivers what I’ll call ‘good enough’ results for a pretty reasonable price. You’ll have to really want the ruggedness to sacrifice video quality over similarly priced options and if that’s the case there isn’t really an alternative, so you know what to do.


Like many rugged products, you either need a camera like the ATC5K or you don’t. And if you are looking to record your exploits while mountain biking, sailing, sky diving or hang gliding, it will do a reasonable, though not outstanding job. Proper bullet cameras will cost you way more than one of these, so in that respect the ATC5K is something of a bargain. But even so, if Oregon Scientific had just improved the image quality slightly, and integrated a decent microphone, this could have been a great bit of kit for hardcore, outdoor types.