Orbitsound wowed us last year with the T9, a soundbar that delivers vast room-filling sound from a compact unit. Key to its success is Spatial Stereo Technology, which uses proprietary audio processing and side-firing drivers to engulf the listener in sound. This sonic wizardry makes a welcome return inside this updated model, along with a couple of other new features. 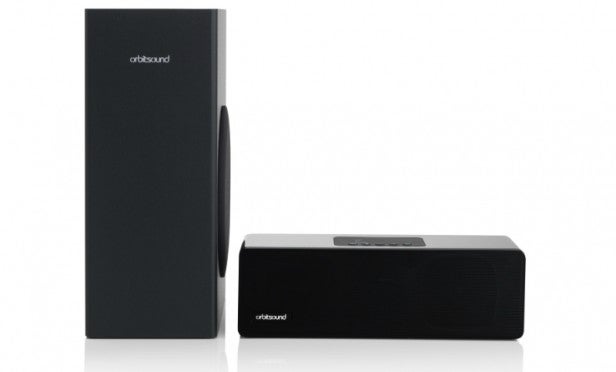 The M9’s soundbar is joined in the box by a similarly compact subwoofer, but unlike the T9 this one is wireless, making it much easier to place within a room. Continuing the wireless theme, the M9 version also boasts Bluetooth, which takes the place of the iPod dock that was found on the T9.

The M9’s compact dimensions will make a minimal dent in your living space, and it’s incredibly stylish to boot. The soundbar is a similar size to the T9 (300 x 90 x 100mm) and is finished in a high-quality gloss black lacquer over a solid wood enclosure. Its beautiful build quality even extends to the magnetic grille that covers the front drivers, which is fashioned from metal and rests on six acoustically damped mounts.

Remove the grille and you’ll uncover two 2.5-inch cones and a 1-inch tweeter nestled between them. At each end are side-firing 2-inch full-range drivers.

On top of the unit you’ll find a rubberised panel housing five control buttons and a few tiny LEDs to denote status and input source. These can’t be seen from the sofa so you’ll only know which input is selected by ear. The unit’s physical buttons include Power, Volume, Bluetooth Mode and Input Selection.

The rear panel sports an optical digital audio input for connection to a TV or Blu-ray deck (a cable is supplied in the box), analogue stereo input and a 3.5mm minijack for portable devices. Notable absentees include HDMI and USB inputs, but given the inclusion of Bluetooth and lack of HD audio decoding, neither is essential. 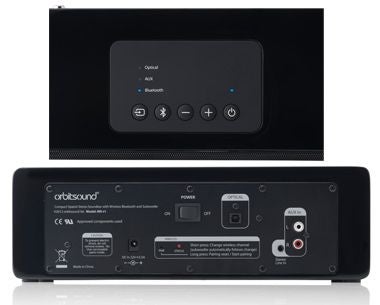 Like the soundbar, the subwoofer is designed for maximum convenience. Its slender frame is perfect for slotting into awkward spaces (beside a sofa, for instance) and with a wireless connection to the soundbar you can place it anywhere. It’s not bad looking either, sporting a smart matt PVC finish.

The sub has a volume dial on the back, but dedicated bass and treble controls on the remote means you don’t have to keep getting off the sofa to tweak it.

Spatial Stereo Technology is the stand-out feature of the Orbitsound M9. It eliminates the notion of a sweet spot, instead generating a wide, enveloping sound that can be enjoyed from anywhere in the room. It works by channelling positional sounds to the side speakers, which interact with the regular sound from the front-firing drivers. 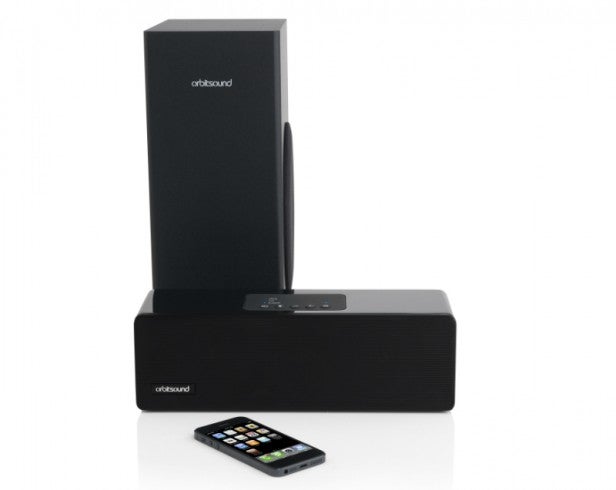 Elsewhere the M9 loses the iPod/iPhone dock of the T9 but gains Bluetooth connectivity. It’s a good trade given that you can enjoy music from a wider variety of devices, rather than just those made by Apple.

It uses the regular A2DP system with no audio enhancement processing like apt-X, however it does boast a clever feature whereby the M9 ‘grabs’ the Bluetooth device when you press play, rather than staying connected the whole time. You can also use the M9’s remote control to skip and pause tracks.

The soundbar and wireless sub connect using a proprietary 2.4GHz transmission system, which eliminates latency that can be detrimental to performance. It has a range of about eight metres.

The M9’s new digital amplifiers output a claimed 200W, which on paper sounds remarkably powerful for such a small unit.