One area where Orbi sets itself apart from several other multi-router Wi-Fi systems is with regards to the customisation on offer. Here you setup the routers by logging into a browser, just like on any normal router, and once in you can adjust many of the settings you’d expect.

These include being able to turn either unit into a conventional Wi-Fi access point, add parental controls and block access to websites or to specific users, as well as configure static routing, VPN, and port forwarding. Plus, there are advanced Wi-Fi features such as beamforming and MU-MIMO.

Before you dive into those settings, there’s a clear and simple guide that runs novice users through setting an admin password and Wi-Fi name and password. Then you’re greeted by a basic menu that provides access to the core wireless and internet settings, along with some parental controls and a list of connected clients and their IP addresses.

Jump into the Advanced section and you get all the extras, although one thing you simply aren’t allowed to do here is to turn off band steering. Most routers that offer this capability provide an option to separate the bands out – in case you want to manually connect only certain devices to certain bands – but here this simply isn’t possible.

Networking
Given the Orbi is aimed at those with larger houses, I tested the Orbi in my usual two-storey house test environment and in a different, three-storey home.

For the first test, I set up the router in the ground-floor front room, where the internet connection enters the front of the house. Wi-Fi speed is then tested at 2m from the router with direct line of sight, then in the rear kitchen where it’s about 5m away, with one brick wall in-between.

Finally, we move up a floor to a rear bedroom that’s approximately 10m away and with two brick walls and one wooden floor in between. We positioned the satellite in the middle of the first floor.

For the second test we set up the router on the ground floor towards the front and side of the house, and again positioned the satellite in the middle of the first floor. We then tested in a rear first-floor bedroom and two of the top-floor bedrooms.

With a basic router there normally isn’t reliable coverage on these top floors, while the most powerful conventional routers only just reach.

We’ve compared to several high-end conventional routers in our first test, but only to the Netgear R7800 in the second test – it’s about as fast as you can get for a conventional dual-band router. 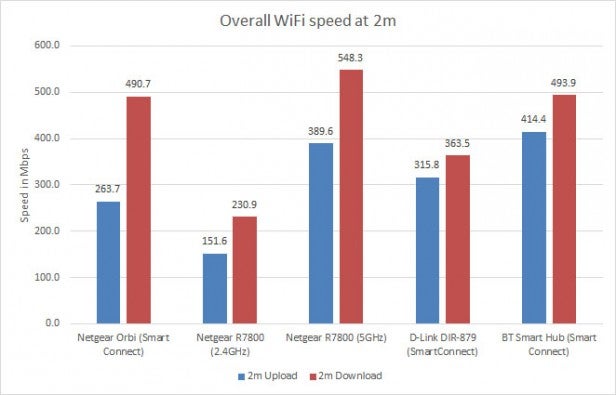 Starting with the first test scenario, the Orbi didn’t set any new speed records for the shorter range tests, but kept in touch with typical high-end AC routers.

This is partially down to the fact that you can’t disable band-steering on this router. We’ve found that this feature tends to reduce maximum performance compared to separating out the bands and connecting to them manually. So those seeking pure performance will want to look elsewhere. 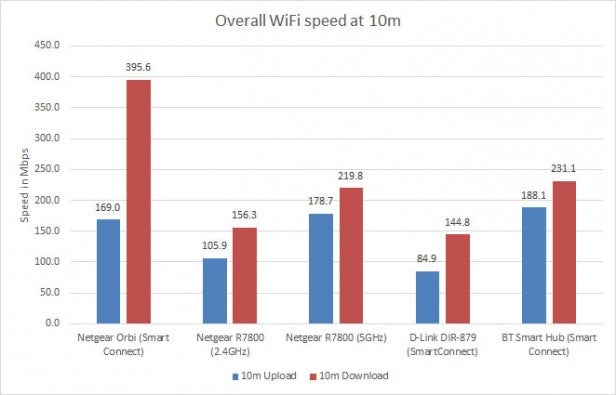 However, once we got to the furthest test in our first scenario, the Orbi really showed what it can do. While most routers have dropped to around half their maximum pace by this point, the Orbi was still maintaining almost full speed, at least for downloads – the weaker Wi-Fi transmitter of the laptop struggled a little more for upload speed. 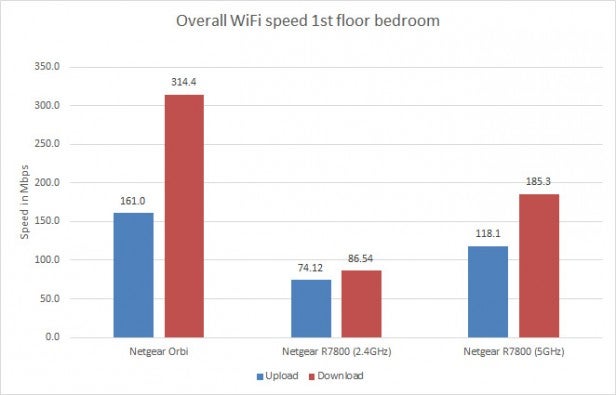 Moving on to the second test scenario, this is where the Orbi came into its own. While the R7800 did manage to stretch its connection to the top floor, it took noticeably longer to connect, and speeds were far more variable. 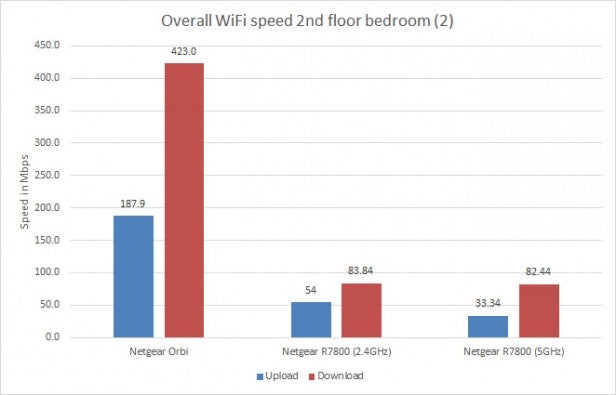 With the Orbi, however, the connection was rock-solid and speeds were dramatically faster. In particular, in the most demanding, furthest-reaching test the Orbi was four times faster than the R7800. Meanwhile, even in the shortest test the Orbi was twice as fast.

USB
Sadly, USB sharing wasn’t enabled at the time of writing so we weren’t able to test how easy it is to setup or how fast it is. However, Netgear says the ability will be arriving in a later firmware update.

Should I buy the Netgear Orbi?

The Netgear Orbi is undoubtedly a fantastic Wi-Fi solution for large homes struggling with Wi-Fi coverage. It’s incredibly easy to set up and provides markedly faster performance than any single router at long range. It’s an expensive option, but if you simply haven’t been able to find another Wi-Fi solution that works then the Orbi is worth a try.

What’s more, it isn’t expensive when compared to other mesh-style Wi-Fi solutions. Most cost in the region of £350 for a two- or three-router package, and none offer the same speed and features as Orbi.

However, for those with smaller homes it’s unlikely you’ll take advantage of what the Orbi can do, except when venturing to the bottom of the garden, so you’d be better off buying a more conventional, powerful dual-band router.

Likewise, if you’re looking to connect up your Wi-Fi to a distant outhouse or garden office then you’re probably better off trailing a wire to the building and installing a conventional Wi-Fi access point.

The Netgear Orbi is the future of Wi-Fi for large homes. It’s expensive but it delivers where it counts.