Orange has a history of offering own-branded handsets on Pay As You Go at the lower end of the specifications spectrum. Way back at the tail end of 2007 and start of 2008 I reviewed the Orange Tokyo and Berlin. The Vegas continues the city-based naming convention, albeit having left a sizeable time-gap since is predecessors.


The Vegas is, says Orange, the “smallest, lightest, cheapest touchscreen mobile available in the UK”. Certainly at under £50 it is cheap, and at 84g and 93mm tall, 52mm wide and 16mm thick, it is light and small. Whether these factors combine into a ‘must have’ bracket is another matter entirely.


The Vegas certainly looks like a flashier handset than it really is. Its appearance is unmistakeably ripped from the HTC design book, though it is not, in fact, an HTC made phone. The rounded corners, narrower bottom than top, and general button styling have a very HTC Touch like ambiance. 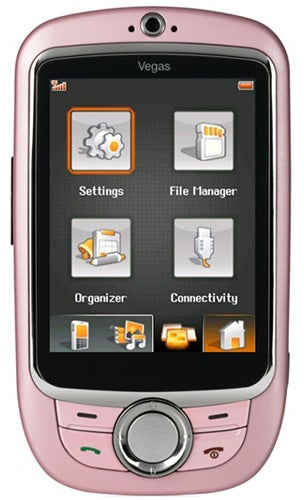 My review sample was a rather awful baby pink colour, something HTC would not touch with a barge pole. You can also get the phone in black. Either way, a silver band runs all the way round the edge of the handset and is also used for the screen’s frame, navigation pad and the camera’s frame.


The overall size of this phone makes it very comfortable for the dainty-handed, and extremely kind on smaller pockets. As is often the case, the pocket-friendliness takes a bit of a nosedive if you want to connect a headset as the slot is on the right side of the casing. The connector is mini USB and the headset is one piece, both irritating aspects.


There are four buttons under the screen offering Call, End and softkey functions. The End button doubles as the on/off switch. Between them is a large and easy to use navigation pad with a sizeable central select button.


Following popular convention, the four points on the navigation button are shortcuts to various services. Out of the box, these are contacts, inbox, SMS creation, music and profiles. I couldn’t see a way to change the settings to a personal preference.

In most cases, you can choose whether to use the touchscreen or physical buttons. For example, softkey options are tappable as well as accessed with the physical buttons and menu items and options can be got at with the navigation button or by tapping the screen. Having the choice between touch and button input methods never felt like overkill.


The screen itself is quite small at just 2.4in. Orange doesn’t quote the pixel count but it looks like a 320 x 240 job to me. It is pretty responsive to the finger, but rather small, and in some cases this lets the phone down.


There are three options for entering text. You can use a touchable number pad style keyboard, which is a little small for pinpoint accuracy or an absolutely tiny QWERTY keypad that’s impossible to use without the stylus (the stylus sits in a slot on the right back edge of the casing). The third option is using the stylus for the phone’s handwriting recognition system. This worked surprisingly well, though the software has to recognise one letter at a time so entering text is a little on the slow side. Whichever method you opt for, texting at speed may be a challenge. 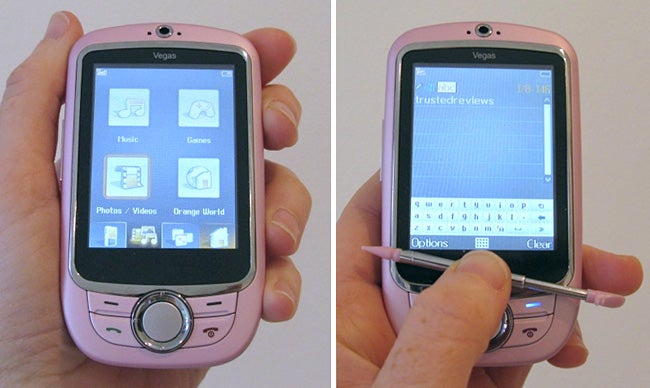 There is a bit of haptic feedback and some finger sweeping support. On the main screen you can sweep horizontally across the date and time info for access to eight shortcuts, and the menu screen is divided into three sub-sections between which you can finger-sweep. You can also sweep vertically through your contacts. It works well enough but you shouldn’t expect the levels of sophistication you’d get from a more expensive handset.


Features are decidedly minimal, too, but then this handset does cost under £50 on Pay As You Go so you shouldn’t be expecting a vast array of them.


The Vegas is a dual-band GSM phone with GPRS. Web use is a bit of a struggle and if you are fan of mobile Facebook, Twitter and the like, you may want a phone with better data credentials.


There is an FM radio to augment the music player, and though its mere nine presets seems rather measly it worked well enough. The music player isn’t all that advanced but at least it has an equaliser. The proprietary headset is a bit of a let down in quality terms and its mini-USB connector makes it difficult to use an alternative.

Bluetooth headsets are supported, but you may struggle for battery life if you choose to use one. The battery is tiny and rated at only 670mAh. I got just three hours 23 minutes of music from a full battery charge. This is abysmal battery life, really, and music fans should steer clear.


Memory is a bugbear too. Orange claims 64MB internally but when I checked this, the phone reported just half a megabyte free so the 64MB must include that used by the OS. You’ll definitely need a microSD card immediately, and the slot is located under the battery.


The camera shoots stills at 1.3-megapixels. It lacks autofocus or flash though does have a self-portrait mirror. Images are ropey. The coloured dish, photographed indoors under normal household lights, is dark and lacks definition though colour reproduction is good. 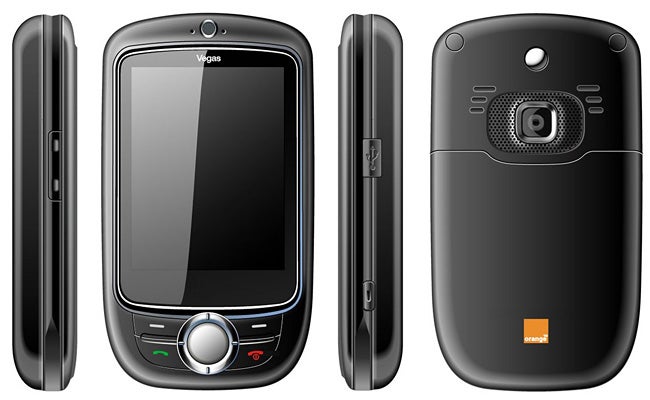 Outside, the white of the chair is far from uniform in colour and the low resolution of the camera is clear. The flowers are well reproduced in terms of colour but the focus is certainly nothing to write home about. Shutter lag is a serious problem too – the camera seems not to take a photo until after the shutter sound has been made. Move the phone when you hear the shutter sound and your photos will be blurred. It also takes an age to save a photo.


Video capture is limited to a 176 x 144 resolution (QCIF) and not surprisingly, given the lack of internal memory, you can’t begin to use it till you’ve inserted a memory card. Other features include a calendar, alarm, calculator, stopwatch, unit converter and world clock.


The Vegas is a low cost handset that does what Orange claims; bringing both a touchscreen and small size to a potentially wide audience. Regular readers will know I don’t penalise low cost handsets for being short on high-end features, but the poor battery life and a seriously under-par camera don’t do the Vegas any favours in the scores department. 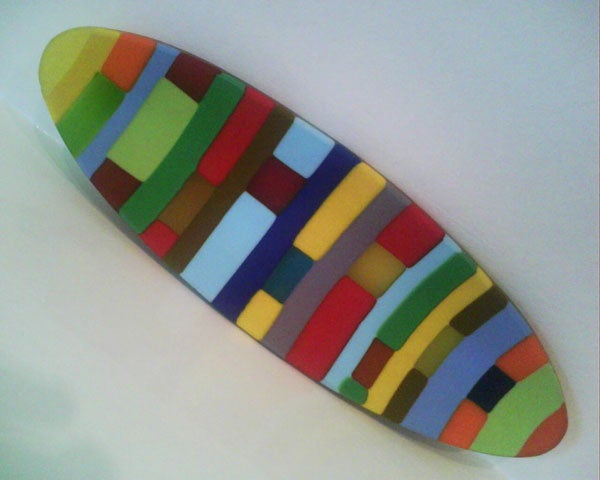 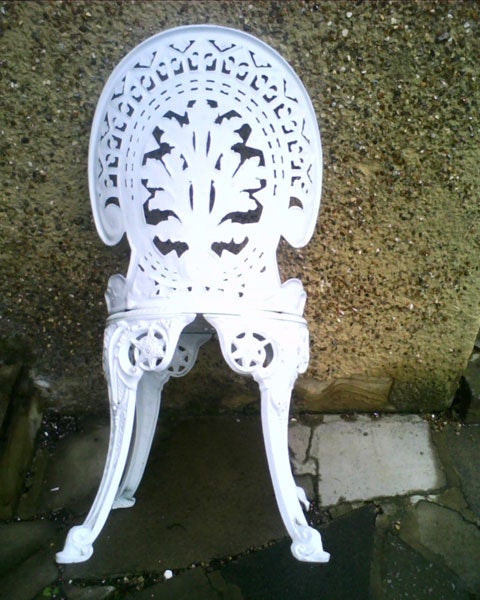 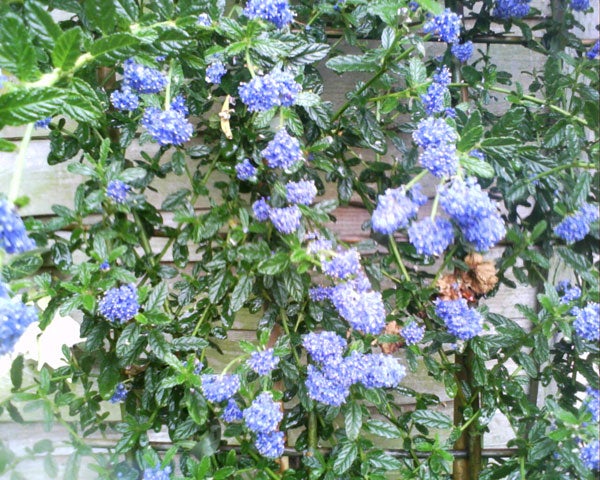