Orange has as long history of supporting Microsoft’s Windows Mobile platform in a range of devices that come under a group heading of SPV. The SPV M700 is a new entrant to the line-up and if you’ve seen HTC’s P3600 then it will look very familiar.


The SPV M700 in many ways takes over where the M600 left off. Similar in size and shape, it is no surprise that coming a year on the M700 adds a raft of new features including 3G support. 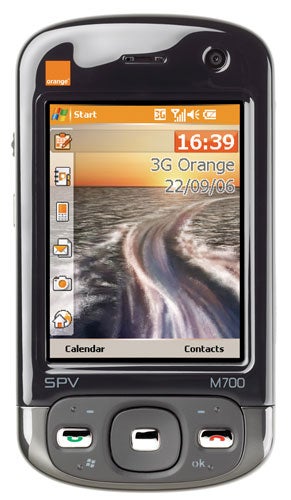 In fact, for my everyday device I had moved from the M600 to the M3100 and enjoyed that devices keyboard and 3G support, but have easily adopted the M700 as my everyday device. While I do miss the integrated keyboard I like the fact that the M700 is smaller and lighter than the M3100.


So what are we talking about for size and weight, then? Well the SPV M700 measures 58mm wide, 108mm tall and 18mm thick, and weighs 150g. It feels fine held to the ear for making voice calls, and call quality is very good.


The M700 comes in two colour variants, black and white. In both instances all of the back apart from the camera surround is made from shiny plastic, as is most of the front fascia. I opted for the black variant in the end, but it was not an easy choice. The black seems to pick up fingermarks more than the white casing, but I felt the black looks a bit more stylish. 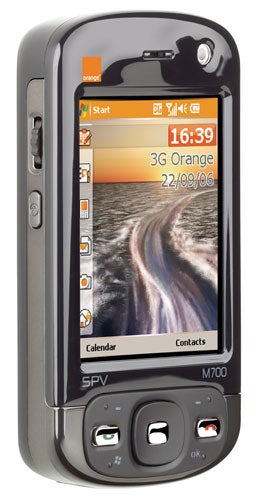 Whatever colour you prefer, the general design of the M700 is the same. The device is dominated by its display. At 320 x 240 pixel, 65,000 colours and 2.8 diagonal inches it offers no real surprises, though it is clear and sharp.


Under the screen and embedded in a section with a slightly rubbery feel that aids grip are the sliver coloured Call and End keys, and between them, a navigation pad with a central select key which is again silver. To the top of this section are two softmenu buttons, to the bottom a Windows Mobile Start menu key and an OK key.


This is Quad-band handset with 3G and it can handle HSDPA to 1.8Mbps. Don’t get too excited about this at the moment though. Orange has launched its HSDPA, which it calls 3G+, but only presently in London. However, the company does plan to roll it out on a broader scale.

Even if 3G+ is not in your area now you can make two way video calls via standard 3G; the lens is at the top right of the screen.


There are plenty of side buttons. On the right edge is the main power switch, one which on a long press lets you make a voice recording and on a short press launches the built in voice speed dial software. There is also a button for using the built in camera.

The left edge is more interesting. The M700 includes a scroll wheel with a press-to-select feature. This sits neatly under the left thumb. Beneath it is an OK button. It enables you to do quite a lot of things without needing to tap the screen, and scrolling through long texts is very easy.


On the bottom edge of the casing is an infra-red port. This, along with the built in Bluetooth and Wi-Fi gives the full range of wireless connectivity options. I am glad to see infra red here. It gets left out so often but is really useful for making quick connections to other devices.


The bottom edge also houses the mini USB connector that you need to use for mains power, PC connection and the provided stereo headset. I can’t say I like the headset very much – its in-ear buds are large and my ears just don’t like this kind of headset at all. I wish room could be found for a 3.5mm headset adaptor.


Orange provides a carrying case with belt clip and a spare stylus with the SPV M700. You also get a vehicle power adaptor. That might seem odd, until you realise that the M700 has a SiRFstar III GPS antenna built into it, which means you can use it as a Sat Nav device.

Orange has its own off-board Sat Nav solution, and you can use this if you wish. You will pay at your usual data rates to download trip routes. Alternatively, you can do what I did and use third-party navigation software.


I found the GPS antenna to work really well and I can’t help wondering why Orange doesn’t make more of it. In fact, that is an understatement. Orange doesn’t even bother to mention its presence at its web site.

There are many tweaks in the recently announced Windows Mobile 6, which owners of this device simply won’t get to play with.

While some are only available to Exchange Server users, there are plenty that ‘standalone’ users can benefit from. But I suspect that there will be devices running both variants of the operating system appearing for some time to come, and that alone shouldn’t be a reason to put you off the M700. 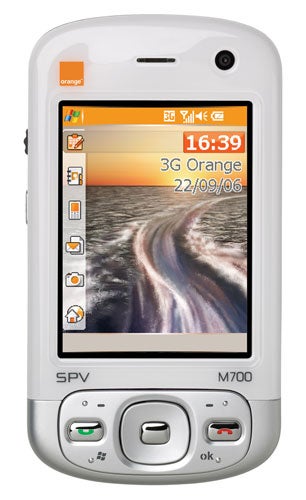 The processor is Samsung’s 400MHz R2442. There is 64MB of RAM and 128MB of ROM. A hard reset of the review device told us that 44MB of storage was free for applications and data. MiniSD cards can be used to add to this, and the slot is on the right edge of the casing, nicely protected by a sturdy hinged cover.


Finally, it is worth mentioning the main camera. It shoots stills at up to 2-megapixels. I like the touch sensitive icons ranged round the screen; it lets you easily access settings while using the screen as a viewfinder. However, image quality is only so-so and certainly not good enough for you to leave the digital camera at home if you have any hopes of taking shots to keep.

Battery life is pretty impressive. I got the M700 to play MP3s from a miniSD card continuously from a full battery charge and it gave me ten and a half hours of music. As usual, extended Wi-Fi or 3G use has a large impact on battery life but I’ve survived for a weekend without mains power and done several trips of a couple of hours using the GPS antenna without needing the vehicle power adaptor.


If you want a 3G Pocket PC that is small enough to use for voice calls yet includes a built in GPS antenna, then this could be just what you are looking for.