Back in March I reviewed the T-Mobile MDA Vario, which was a cool little Windows Mobile device with a slide out keyboard. Although I liked the Vario, I found myself more impressed with the Orange SPV M5000, which although larger, had the advantage of 3G support. Of course what I really wanted was a cross between the two – a device with the dimensions of the Vario, but the 3G support of the SPV M5000. Well, it appears that wishes do come true, because that’s exactly what I’ve got on my desk right now.


If you read Sandra’s review of the HTC TyTN, you’ve probably noticed that the Orange SPV M3100 is a variant of that device. The big difference being that this one is available on a contract, and therefore won’t cost you over £500! In fact you can pick the M3100 up for free if you go for an Orange tariff at £35 or above. 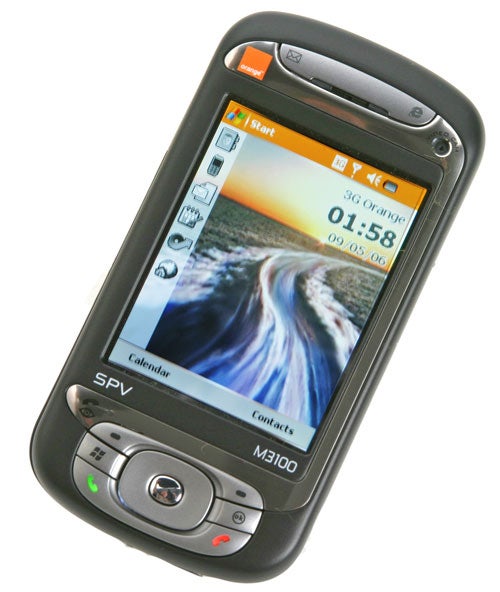 The black and silver finish definitely works well and despite looking relatively obese compared to the plethora of anorexic, ultra-slim handsets on the market, the M3100 still looks stylish and modern. With a weight of 178g including SIM, battery and memory card, the M3100 isn’t light by modern phone standards, but it isn’t heavy compared to most Windows Mobile devices either.


There is a plethora of buttons all over the M3100, but still it manages not to look cluttered. Below the 240 x 320 screen you’ll find a four way navigation pad with a button at the centre. The navigation pad is flanked on both sides with buttons – you get two soft buttons, Call and End buttons, an OK button and a Windows button. An interesting addition is a dedicated video call button, for easy differentiation from voice calls. Above the screen you’ll find a couple more buttons – one launches your email client, while the other launches your web browser. Finally, in the top right of the front fascia is a small camera for video calling. 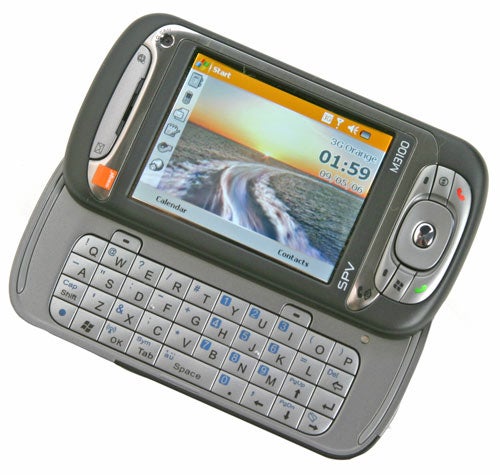 On the base of the unit is an IrDA port, in case you’ve still got hardware that uses it. Next to the IrDA port is a mini-USB port that is used for charging and syncing. Interestingly, the bundled hands-free set also uses the mini-USB port. This brings with it a couple of issues – obviously you can’t use your own headphones when listening to music, but it also means you can’t listen to music while you’re charging the M3100.

On the right side of the chassis is the power button – of course this doesn’t actually power the unit down, unless you hold it for a few seconds, it simply turns the screen on/off. Below the power button is the Communications Manager button – from here you can switch on/off Bluetooth, Wi-Fi and the phone antenna, among other things. Finally on the right is a shortcut to the 2-megapixel camera.

On the left there’s a slot for a micro-SD (or TransFlash) card. To be honest I would have preferred a full size SD card slot, as seen in the SPV M600, but I assume that when you’re squeezing this much into a relatively small chassis, compromises have to be made. Also on the left is a dedicated button for voice commands and another OK button.


The last feature on the left is arguably the best hardware improvement over the Vario design – a jog dial. Opinions seem to be split on jog dials, some people love them while others hate them – I’m definitely in the former camp. I remember reviewing the Sony Z1 phone many years ago and loving the fact that you could scroll through menus using the jog dial, while other journalists criticised the phone for having the jog dial, saying that it was unintuitive to use! That said, I think the introduction of the BlackBerry has improved the jog dial’s social standing these days.


There’s a telescopic stylus hiding in the base of the casing. It’s the same stylus that shipped with the Vario and I have to say that I far prefer the solid metal stylus that came with the SPV M600.

Sliding the screen to one side reveals the integrated keyboard, just like on the MDA Vario. The keyboard on the M3100 is very different from the Vario, in that there is no spacing between the keys – in fact it looks like a smaller version of the keyboard seen in the SPV M5000. How well you can use the keyboard on the M3100 depends on a couple of things – how small your hands are and how dexterous your thumbs are. If like me, you’ve got fairly small hands and have spent most of your life playing video games, you’ve probably got both those bases covered.

I found the keyboard surprisingly usable, but then I had no problem typing on the Vario and M5000 either. Just like the Vario, you need to press a function key to access many symbols, while getting at the £ symbol requires a trip to the separate Symbol menu. Although this sounds annoying, it really isn’t and you soon find that it doesn’t slow you down too much. If I have one criticism of the keyboard it’s that some of the keys felt a bit sticky – on occasion I was sure that I had pressed a key, but it hadn’t registered. I managed to address this issue by adopting a slightly more aggressive typing style, but I would prefer to be able to type naturally. To be fair to Orange though, this is a pre-production version of the M3100 and Sandra has told me that she has encountered no such issues with her retail version. 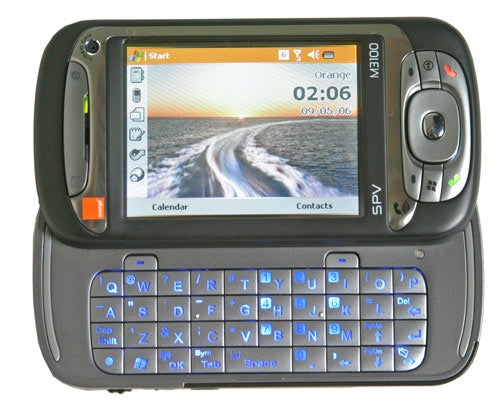 The 2.8in screen is a pretty good example – it’s bright and vibrant and ideal for showing off your photography handy work to your friends. That said, I think that 240 x 320 is getting a bit old in screens this size, especially since the Samsung D600 (which launched over a year ago) sports the same resolution in a far smaller physical screen. I’d like to see Windows Mobile devices like this move up to a 640 x 480 resolution screen, although the screen resolution isn’t enough to put me off the M3100.


Connectivity wise, the M3100 really does have everything you could want. Not only is this a 3G device, but it also supports HSDPA for download speeds up to 1.8Mbit/sec. Unfortunately Orange doesn’t have an HSDPA network in place in the UK yet, but it shouldn’t be long before you can take advantage of these lightning fast download speeds. If you can’t find 3G coverage the M3100 will drop down to the EDGE standard, which still produces pretty good results, as seen in the SPV M600. If all else fails you’ll get GPRS speeds, but I have to say that I managed to find 3G coverage pretty much everywhere I went with this device. You’ve also got integrated 802.11b/g Wi-Fi and Bluetooth thrown in for good measure, along with infrared. 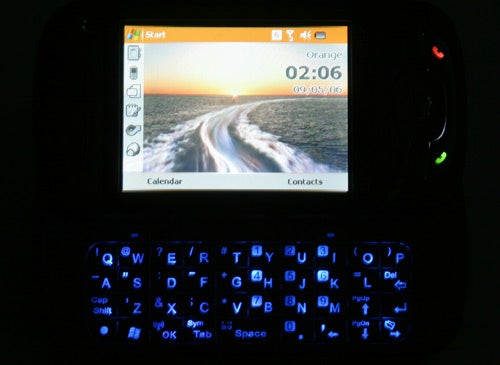 With integrated Wi-Fi you’ll be able to use VoIP services as well – although the 400MHz Samsung processor is only just fast enough for the Windows Mobile version of Skype. As far as memory goes, you get 64MB of RAM and 128MB of flash storage, although only 55MB is free for use after the Orange application install. The limited memory isn’t really an issue since it only costs around £10 for a 512MB MicroSD card these days.

At the rear of the M3100 you’ll find the main 2-megapixel camera. Image quality from the camera is reasonable, although it had some problems with colour accuracy – those bins really aren’t the bright green portrayed in the image below. There’s a switch on the camera to switch it into macro mode, and this worked surprisingly well, as you can see from the second picture below. 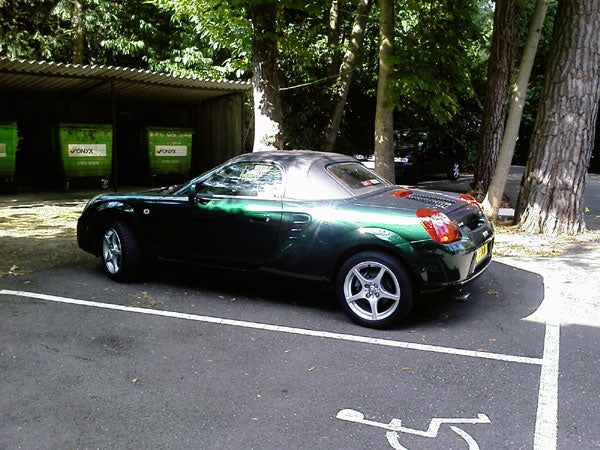 ”’The camera is fine for the odd bit of point and shoot, but the colours aren’t as acurate as they could be.”’ 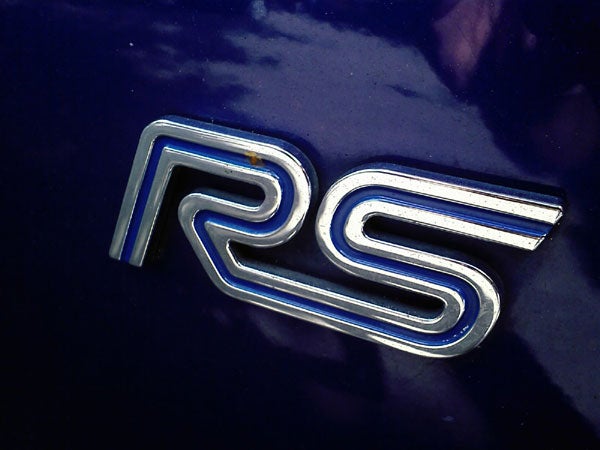 ”’The macro setting on the lens is very impressive though.”’


Application wise, you’ve got the usual complement of Windows Mobile programs – Word, Excel, Powerpoint and Media Player, to name a few. Conspicuous by its absence is Pocket MSN, which allows you to use MSN Messenger on the move. Orange chose not to install Pocket MSN on the SPV M600 as well, and although you can install it manually, it’s a little annoying that you have to.


The M3100 is a quad band GSM phone so it should work pretty much anywhere in the world. Call quality is also surprisingly good considering that it’s more PDA shaped than phone shaped. I tried some video calling between the M3100 and Benny’s Sony Ericsson K800i – the quality was good, even though I had to look at Benny’s face! Benny said that the image quality was better than when he video calls to another K800i, so it would appear that the video call camera in the M3100 is above average. 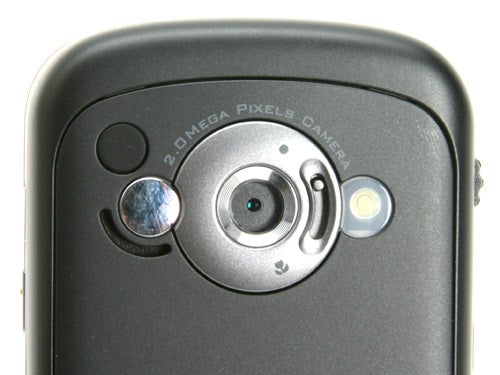 You can setup the M3100 to use Microsoft Direct Push email, or if you want a simple solution, you can just set up your POP3 account and configure the device to poll your server regularly. Email isn’t as seamlessly integrated as it is on a BlackBerry and the battery life isn’t anywhere near RIM’s device either, but then the M3100 can do so much more than a BlackBerry.


On the whole I really like the SPV M3100, so much so that it has replaced my trusty SPV M600. Despite being slightly larger than the M600, the integrated keyboard and 3G support in the M3100 make it the best smartphone available right now. 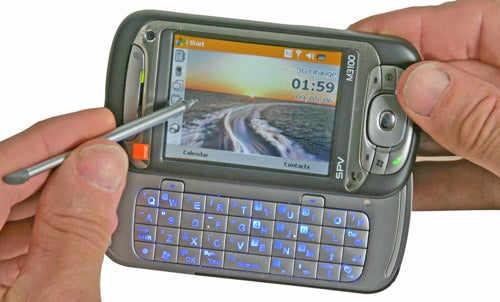 
Orange missed the boat slightly by not offering a competitor to the T-Mobile MDA Vario, but it has made up for that with the SPV M3100. Taking the best features from the SPV M5000 and the Vario, the M3100 is feature packed, has unprecedented connectivity and is still small enough to use as a phone. The fact that you can pick this device up for free on a £35 contract is just icing on the cake.