In the early days of Windows Mobile Smartphones Orange was the UK’s leading light, launching the first UK device way back at the tail end of 2002. Since then Orange has been joined by other operators and by operator agnostic vendors, but the company has kept its own line flowing with a steady range of new entrants. The latest of these is the SPV C550, a blatant attempt to jump on the music phone bandwagon, but with a few other nice plus points too.


In some ways this is a strange device for Orange to have launched. It runs Windows Mobile 2003 Second Edition, but Windows Mobile 5 is surely due to make its first appearance in a smartphone before too much longer. It’s already made its PDA debut in the O2 Xda Exec, for which Orange has a dead ringer – the SPV M5000 (expect a full review of this soon) slated as coming soon, and smartphone variants can’t be far behind. 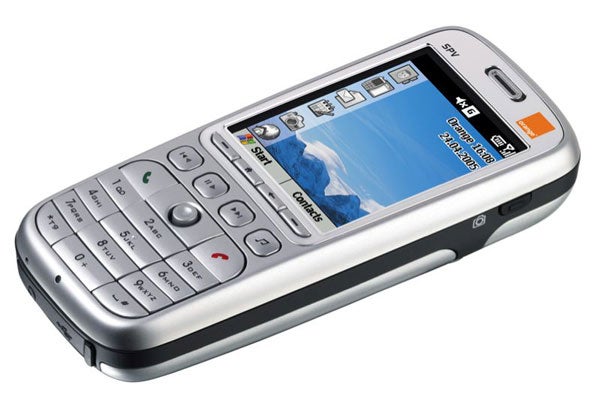 On the other hand, the SPV C550 deals with a number of issues its predecessor, the SPV C500 suffered from and updates some core specifications. In so doing it helps maintain Orange’s position as arguably the premier Windows Smartphone provider in the UK.


The SPV C550 gives away its music playing pretensions immediately, thanks to four comparatively large buttons that sit above the number pad. From left to right these are marked with icons for back, pause/play, forward and a musical notes symbol. By default pressing the last of these launches Orange’s Music Player, designed to help you download tunes from Orange’s online service and then play them on the C550.


You can change the setting so that this button launches the Windows Media Player instead, by going to the Settings area, choosing Button Settings and making your tweak. I mention this in detail as Orange doesn’t explain the ‘how to’ in its device manual.


Above this quartet of buttons sit another four, this time very tiny yet surprisingly easy to hit. Two are softmenu keys, one a back button and one a Home key that takes you from whatever you are doing directly back to Orange’s Home screen. Beneath the music buttons is the numberpad, complete with Start Call and End Call keys and a joystick for navigating around the screen.


The whole button arrangement is a lot neater than it was on the SPV C500, and the loss of the long, narrow navigation bar that provided directional movement on that earlier handset will please many. The joystick is certainly both more responsive and intuitively easier to use.


There is one newbie button not seen in the SPV C500, though. Above the volume rocker sits a quicklaunch key for Internet Explorer. As a keen mobile Web user I found this very handy indeed.


On the bottom edge sit two connectors, under a single rubber cover. One is the Mini USB slot you’ll need to use to make a wired link to your PC for data synchronisation. The other is a 2.5mm headphone jack. Putting this jack on the bottom of the handset may make sense from an engineering point of view, but for end users it is a real niggle, and having to expose the USB connector to get to it is doubly painful. 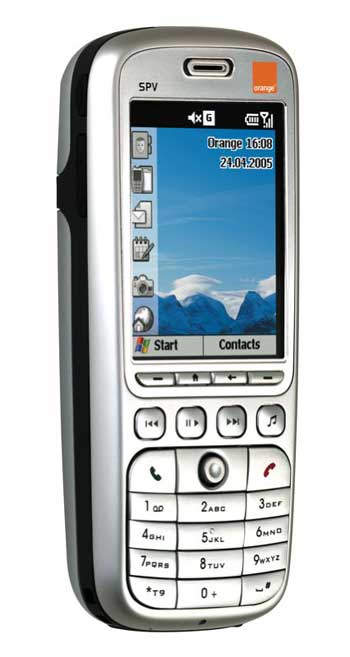 There’s more to note about the music playing pretensions of the SPV C550, much of it paradoxical. With 64MB of built in memory there isn’t going to be enough space for you to store too many tracks so Orange supplies a miniSD card to bump this up. But it’s only a 128MB card, which isn’t anywhere near enough for a music-playing phone, especially one packing Windows Media Player 10 with its ability to synchronise with its desktop version. Also, horror of horrors, as with the SPV C500 the memory card this lives under the battery, so that you need to power the handset down to swap cards – doubly irritating as our SPV C550 took a full 65 seconds to boot to the Orange Home screen.


Sound quality from the provided stereo headset is pretty good, though, and there is more volume than we could comfortably handle through the earbuds, though at the very highest there was some distortion. The handset’s speaker is pretty good too. If only someone would include an FM radio in a Windows Mobile Smartphone I’d be happy to listen for as long as the battery would allow. Orange’s other software addition for musicians, FirePlayer, lets you mix downloaded tracks and produce ringtones. I found several potentially mixable tracks, but at £3.50 each I wasn’t greatly tempted.

Actually all this music capability is not the best thing about this handset. The screen takes the prize here. It’s just 2.2in diagonal, but packs in 240 x 320 pixels whereas the SPV C500 managed a more usual 176 x 220. These extra pixels mean a little more information can be delivered in the screen space – there are now, for example, 10 application options listed at once when you press the Start button instead of the previous nine, but more importantly the screen is a lot clearer. It’s still only capable of 65 thousand colours, though, and so left behind by the increasing number of handsets that offer 262 thousand. 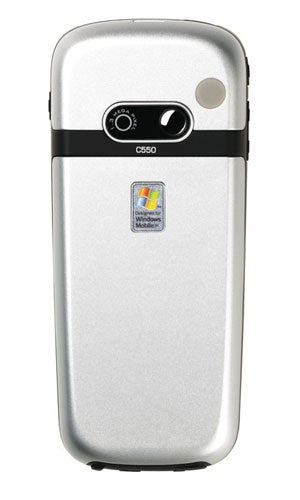 
There is a maximum of 4x digital zoom available and shooting modes for daylight, incandescent, fluorescent and night time, as well as greyscale, sepia and cool filters. None of this is particularly fancy though, and even the ability to manually adjust the brightness, gamma, hue and saturation settings using the joystick is something I’ve seen before. What the camera lacks is an LED flash, which would help with short range indoor snaps in gloomy conditions.


With tri-band GSM and class 10 GPRS the SPV C550 should see you through your worldwide travels pretty effectively, and it is a definite improvement on its predecessor in terms of having a better screen, more memory, and a joystick instead of the loathed lozenge for navigation.


But don’t be drawn in by its pretensions as a music player. Good sound output and dedicated buttons are not all that a music playing handset needs. Lots of internal memory and easily swappable flash memory are also important. And how about this for an annoyance? Tunes downloaded with Orange’s Music Player are not listed in Windows Media Player, so you can’t play from one unified spot, or make playlists incorporating both ripped and downloaded music. Daft.