Get the Orange San Diego FREE with an Orange deal >

It feels a bit strange to turn on a phone and see
the Intel Inside logo pop up, but that’s exactly what happens when you
power up the Orange San Diego. The first phone to arrive in the UK with
Intel’s new Atom mobile chip beating at its heart, the Orange San Diego
has turned its back on the ARM-based processors that are usually found
in Android handsets. Despite having a relatively high specification – a
4.0-inch screen, HDMI output and an 8-megapixel camera – the phone is
actually very affordable, as you can buy it for £200 on Pay As
You Go or get it for free on a £15.50 a month contract. So, is it worth
considering if you’re on the hunt for an low-cost, but powerful
Android handset? 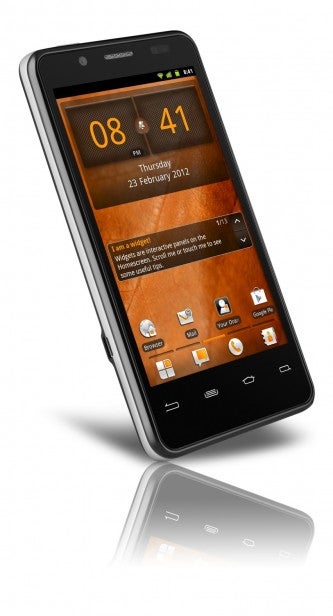 Orange San Diego – Design
The
Orange San Diego is a child of many mothers. The phone is based on an
Intel design; it was manufactured by Gigabyte; and is branded by Orange
in the UK. However, the same phone is available under different names
including the Intel AZ210, XOLO X900 and the Megafon Mint.

The
San Diego’s design is pretty ordinary in a lot of ways. The front is
finished in the usual glossy black, with a tiny meshed speaker grill
covering the ear piece and four touch buttons at the bottom of the
screen for the back, menu, home and search functions.  The rear has a
slightly rubberised finish that makes it feel quite grippy, but the
camera mounting protrudes slightly from the back, so it doesn’t look as
neat as it would if it sat completely flush with the casing. 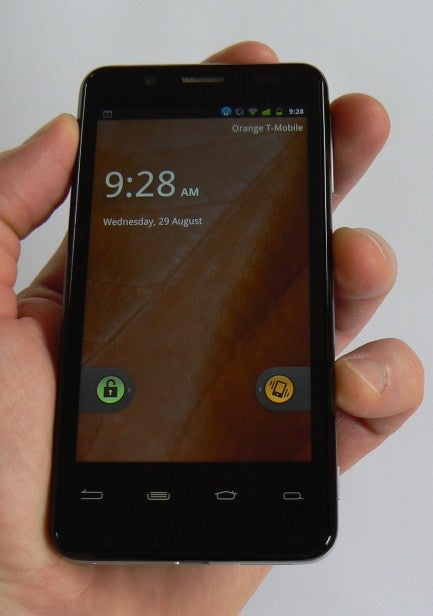 There’s
a silver band running around the outer edge of the phone, but it looks a
little heavy on the plastic, which is a shame. Like the Apple iPhone 4S,
the Orange San Diego features a one piece design, so you can’t remove
the battery and it doesn’t have a user-accessible SD card slot (it
actually does have one under the battery cover, but you need to
dismantle the phone to get at it). This means you’re stuck with the
phone’s, admittedly fairly generous, 16GB of built-in memory.

The
Orange San Deigo takes a micro SIM card and this slots into a pop out tray on
the right hand edge. As you would expect, there’s a power/lock button at
the top and a volume rocker switch on the right hand side. However,
there’s also a dedicated camera button on the bottom of the right hand
edge, which is something that you don’t see often enough on Android
phones. Holding down the camera button takes you directly to the camera
app. However, unlike on Windows Phone handset, you can’t launch the
camera app in this way directly from standby.

Along with the
headphone jack on the top edge and microUSB port at the bottom, there’s
also a miniHDMI port on the left hand side, which is a great feature to
have on a phone in this price range. 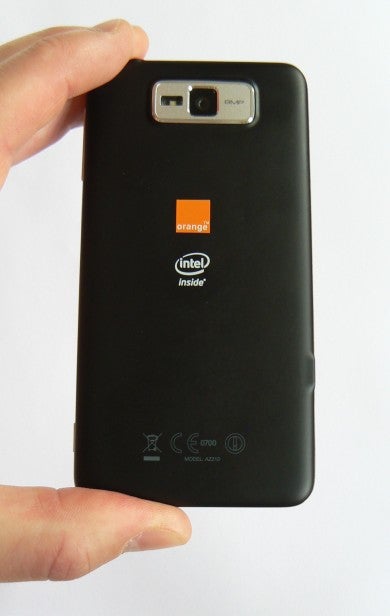 Orange San Diego – Screen
The
screen on the Orange San Diego is one of the better ones we’ve seen on a
£200 handset. At 4.0-inches in size it’s large enough to give you that
extra bit of screen space without making the phone feel overly bulky
when you’re holding it in your hand. What’s more, the resolution is also
good at 1204 x 600 pixels, so webpages, text, icons and movies look
sharp with nice crisp edges. It’s not the brightest display we’ve seen
and colours aren’t quite as vibrant as you get on some high-end
handsets, but for a £200 phone we think it’s about as good as you’ll get
today.

Orange San Diego – Specs
Of course the big different between the Orange San Diego
and other Android phones is that it uses Intel’s new mobile Atom chip.
This is a single core chip that’s clocked at 1.6GHz, with the handset
also playing host to 1GB of RAM too. Intel reckons it’s first smartphone
chip is powerful enough to challenge most dual-core ARM chips. That’s a
bold claim, but one that’s backed up to a fair degree by the phone’s
performance, especially when it comes to web browsing. 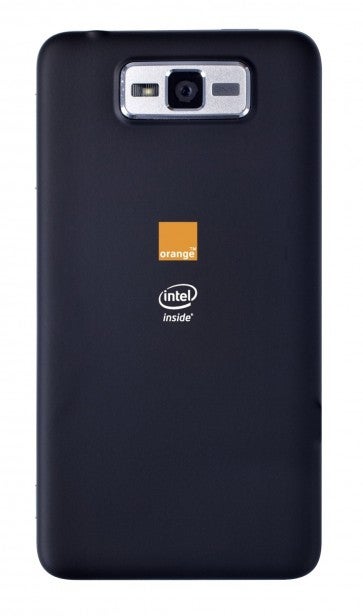 Performing
exceptionally well for a phone in its price range when it came to the
benchmark tests that we chucked at it. For example, in Sunspider it
scored 1389.6ms, while in Browsermark it rocketed to a score of 115512.
Both of which are pretty rapid for a £200 handset. In the Linpack test,
which measures processor performance, it scored 84.672 Mflops for the
multithreaded test, and its graphics performance isn’t half bad either
as in the GLBenchmark it managed to achieve 35fps in the Classic
Egyptian test.

Of course, benchmarks can tell one story while
day-to-day performance can tell another. However, in the case of the San
Diego the phone does actually feel quite speedy to use and it really is
very fast when it comes to rendering web pages, which is, of course,
one of the main uses we put our phones to these days.

Despite
this we did run up against a few issues when using the handset. The
biggest problem is app compatibility. Because the phone uses an Atom
rather than ARM processor, some apps that have been coded specifically
for ARM won’t run properly on it. Intel claims that it has successfully
tested around 70 per cent of apps in Google Play, but that still leaves a
question mark over nearly a third of them. Certainly we ran into a few
instances where apps refused to work. On the gaming front both Raging
Thunder 1 and 2 started up but would then force close. Temple Run isn’t
supported and neither is the BBC iPlayer app
(although as Flash is supported you can watch shows via the iPlayer
website). We also found that popular video players such as the MX Player
and BSPlayer only worked in software mode leading to choppy,
unwatchable videos. The x86 binary version of MoboPlayer worked to some
degree, but video was limited to a small window and we couldn’t get any
sound from it. 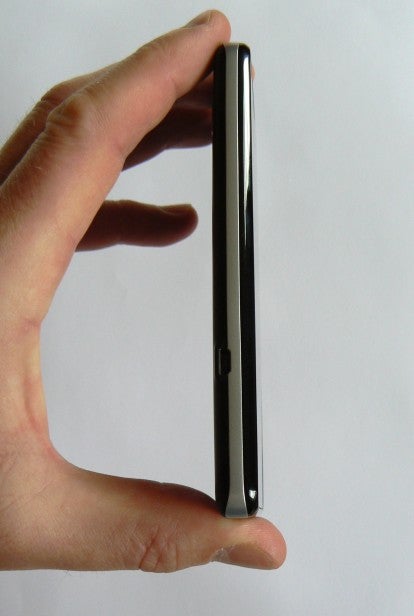 Orange San Diego – OS
Disappointingly the Orange San Diego runs Android V2.3 (Gingerbread) rather than
Android 4.0 (Ice Cream Sandwich). Orange does plan to release an ICS
update for the phone, but there’s currently no word on when this will
arrive.

The good news, however, is that Orange hasn’t overly
customised the phone’s user interface, so essentially it looks very much
like standard Android except with the icons having been given the
Orange once over. You’re given five homescreens to play with and tapping
the home button twice shows you an overview of all five on a single
screen. Orange has also added some widgets including a HTC Sense-style
clock, weather widget and one that shows your handset’s status including
the mobile signal strength, battery life remaining, free storage space
and any Wi-Fi networks you’re connected to. A selection of Orange apps
including Orange Wednesdays for the carrier’s 2for1 cinema deals also
feature. More interesting is Orange Gestures app. It allows you to draw
shapes on the screen to quickly launch apps, dial contacts, send SMS
message and more. 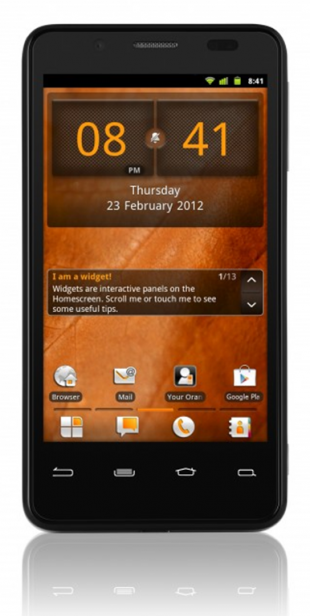 Orange San Diego – Camera
When
it comes to getting snappy, you’ll find that the phone has a front
facing camera with a 1.3-megapixel resolution as well as the main
8-megapixel camera on the handset’s rear. The rear camera is pretty
advanced for a phone in this price range, hosting the ability to shoot
1080p Full HD video with a special burst mode featuring to fire off ten
successive snaps in under a second. The camera app is a little bit slow
to load, though, and despite the impressive camera specs the results
turn out to be a bit mediocre. There’s a lot of blurring on movement in
1080p videos and photos lack that extra bit of sharpness to make them
stand out from the pack.

Battery life during our test period
seemed to be pretty good and perhaps slightly better than many dual-core
Android phone’s we’ve tested. At a stretch, with moderate usage, we
could get a day and a half to two days out of it. The phone also seemed
to have very good reception both with mobile signals and Wi-Fi. The GPS
chip was consistently very fast at getting a lock on our position, too.
It’s also worth noting that the phone does support NFC, although as it
isn’t running ICS the Android Beam app isn’t available.

Orange San Diego – Verdict
Whilst
it is a shame the Orange San Diego currently uses the dated, Android
2.3 version of Google’s OS and that buyers are likely to run up against
some compatibility issues with certain apps, this is still a very
impressive handset. With its price the key selling point, there are
simply no other Android phones costing £200 that can offer this level of
performance or such an abundance of features.