Orange has given its mobile broadband service a bit of an overhaul with the introduction of a new dongle that’s available in a range of colours, so we thought it was time to give the service a once over and see how it performs.


The new mobile broadband pack is supplied in a retail-friendly box with a plastic window on the front through which you can clearly see the new dongle. We had the black version, but the dongle is also available in white and pink. We can see the benefits of the white version, as it’ll better match many of the netbooks around at the moment, but even the members of the fairer sex we asked thought the pink one looked a bit tacky. Surely red would have been a better option, but there’s no accounting for taste.


Inside the box you’ll also find the printed quick start manual and a USB extension cable, which is handy when using the dongle with a desktop PC or with laptops or netbooks that have awkwardly placed USB ports. 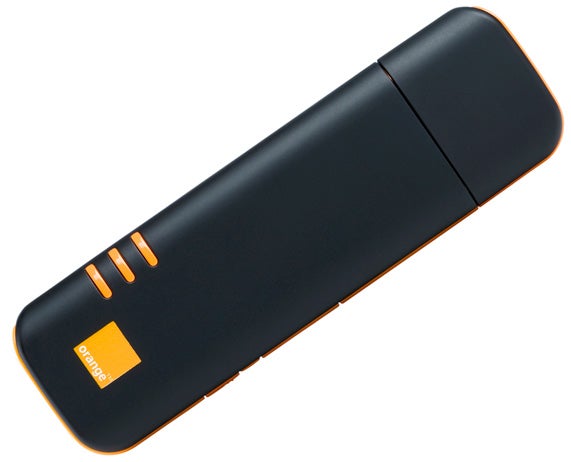 There’s not usually much to get excited about when talking about the design of a USB dongle, but we have to admit that Orange has gone to some lengths to give this one pretty smart styling. It’s got pleasingly rounded edges and the plastic casing has a slightly rubberised feel to it which makes it nice to handle. No matter which colour you opt for you’ll find that all three have an orange stripe down one edge plus three orange lines on the main body just to remind you who you’re getting your mobile broadband service from.


Getting the service up and running is very straightforward. All you have to do is place the Orange SIM card into a pull-out holder which slides back into a recess behind the USB connector. Because the dongle has some built-in memory, which is used to store the drivers and set up software, it’s a piece of cake to set up with your computer (both PCs and Macs are supported). All you have to do is plug it into a spare USB port and once it’s recognised by your system the installation wizard will appear to guide you through the rest of the setup process including the installation of the drivers and other relevant software.

The dongle also has two other interesting features hidden behind a pair of flip-out plastic covers. The first is a special socket that lets you use it with an external aerial to improve reception in dodgy signal areas. Most people won’t need this, but it may come in useful for those using mobile broadband at home as a replacement for a fixed-line service in areas where the signal is not as robust as it could be. The second flip-out cover opens to reveal a microSD card slot. This allows the dongle to act as a microSD card reader or alternatively you can just keep it permanently loaded up with a card and let the dongle double as a USB memory key.


The stick is actually a rebadged Huawei Mobile Connect E160E. It supports a maximum download speed of 3.6Mbit/s via HSDPA (or 3g+ as Orange calls it), but will also connect using 3G, Edge, GPRS and GSM according to what type of signal is available in the location where you’re trying to use it.

Unfortunately in our test location in east London Orange has relatively poor coverage compared to other networks like T-mobile, O2 and Vodafone. As a result it frequently skipped between HSDPA, 3G and GPRS data download speeds, which was annoying. Here the maximum download speed it could achieve was 1.1Mbit/s. However, when using it out and about in the middle of London it performed reasonably well, clocking up a top speed of 2.2Mbit/s. However, more often than not it connected at around the 1Mbit/s mark, which is pretty much par for the course with mobile broadband in our experience.


When you’ve got good reception the service feels pretty sprightly for day-to-day surfing and certainly has enough speed to let you comfortably stream video reviews from TrustedReviews or shows from BBC iPlayer. You can check the coverage for your postcode online and Orange will also let you return the product within two weeks if you don’t think the coverage is good enough in your area.

The software Orange provides with the dongle is called Mobile Partner, but it’s almost identical to that supplied with both T-mobile and Virgin Media’s mobile broadband services, so presumably it’s simply a rebranded version of Huawei’s own software. Either way it doesn’t’ really matter as the software does the job that it needs to. The main screen presents you with four tabs across the top for connection, statistics, text and phone book. The connection tab is used simply to connect and disconnect from the service while the statistics page offers comprehensive information about your web usage.

Current transfer speeds are shown on the right hand side as well as daily, monthly and yearly uploaded and downloaded data levels, which make it easy to track your data usage. There’s also a graph that plots the downloaded data during your current session. The text tab lets you send new text messages and sort your incoming messages into folders, while the phone book is where you store contact numbers. It’s all clear-cut stuff and very easy to use and understand.

The new dongle will set you back £29 on a £9.79 per month contract that has a 1GB download limit. Alternatively you can get it for free if you opt for the £14.68 per month pack which gives you a 3GB data allowance.


Price-wise, Orange’s mobile broadband service is on a par with most of the other mobile operators. However, Vodafone’s service has consistently outpaced the other networks, including Orange, in terms of speed in our tests and T-mobile bungs in free access to its network of Wi-Fi hotspots with its mobile broadband deals. So while this offering from Orange is decent, it’s not exactly exceptional value for money and wouldn’t necessarily be our first port of call for mobile broadband even given the sexiness of this new dongle.