If you're looking for the absolute best electric toothbrush that money can buy the Oral-B iO Series 9 is it. This model uses a new frictionless magnetic drive that delivers maximum power without the noise and brash attack of the company's oscillating models. With a clever LCD that helps you pick the best cleaning mode, and a neat travel charging case, this is the best-performing toothbrush we've tested. Slightly iffy brush tracking in the app and the high price makes this a hard purchase to justify, but if you have the money you will not be disappointed.

For years, Oral-B has produced oscillating toothbrushes, which have been powerful but quite loud and can take a while to get used to. The Oral-B iO Series 9 changes that completely, with a new magnetic drive, redesigned toothbrush hub, smart display and even an app to help you brush.

Design and features – The LCD screen is really handy

Unbox the Oral-B iO Series 9 and it looks much like any other electric toothbrush – there’s only so far you can go in design. You can buy this model in black, white or pink. Take a closer look and you can start to see some differences from previous Oral-B brushes.

For starters, the brush head design is different and incompatible with non-iO toothbrushes. This is down to the new frictionless magnetic drive system that Oral-B says distributes energy more efficiently to the bristles in the brush. 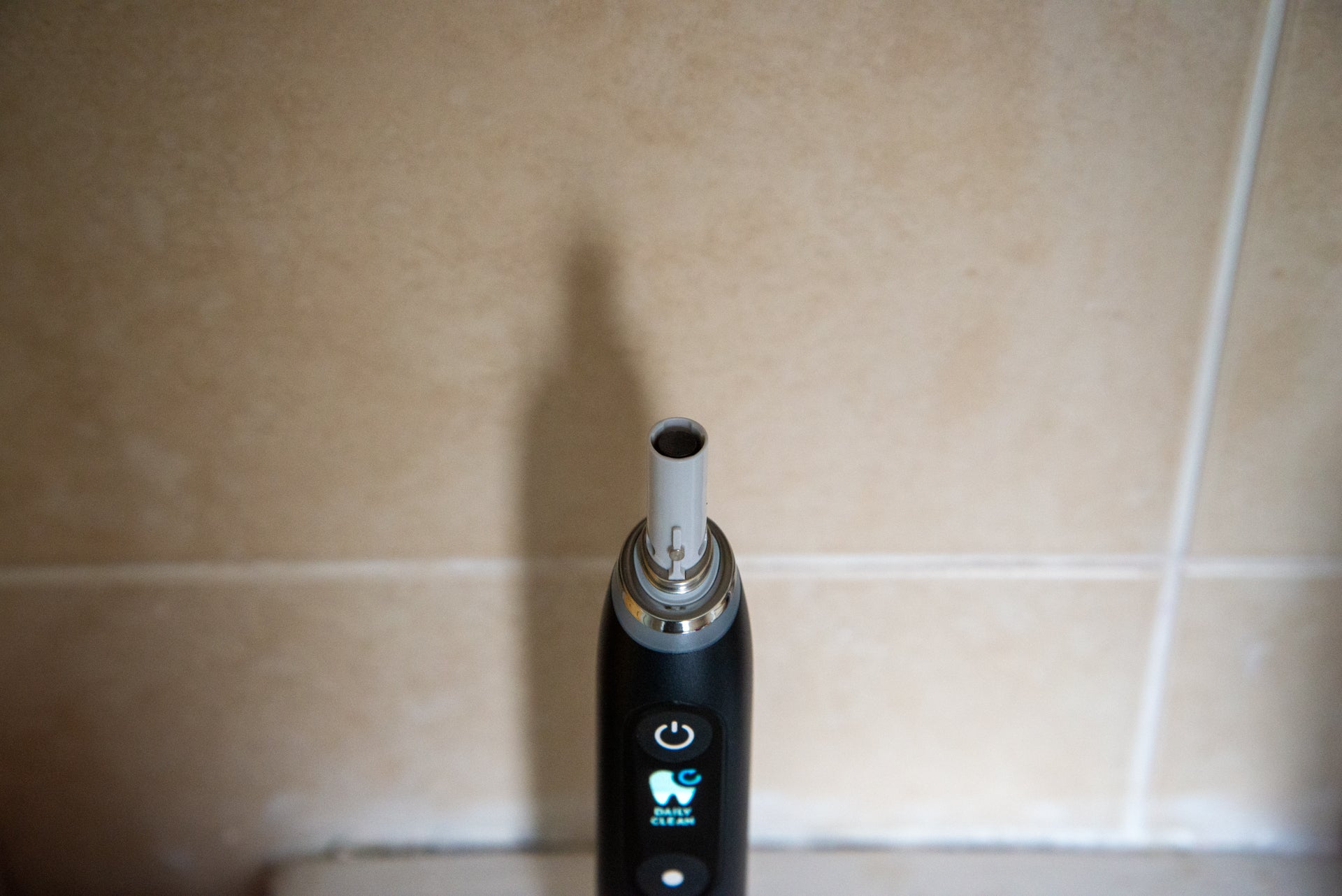 The other major difference is that this toothbrush has an LCD screen. I’m used to Oral-B brushes having lots of cleaning modes, but it was often hard to work out what each symbol meant. Having a screen fixes those issues, as you can use the selector button to flick through the cleaning modes, with the brush showing an icon and text description for each one. 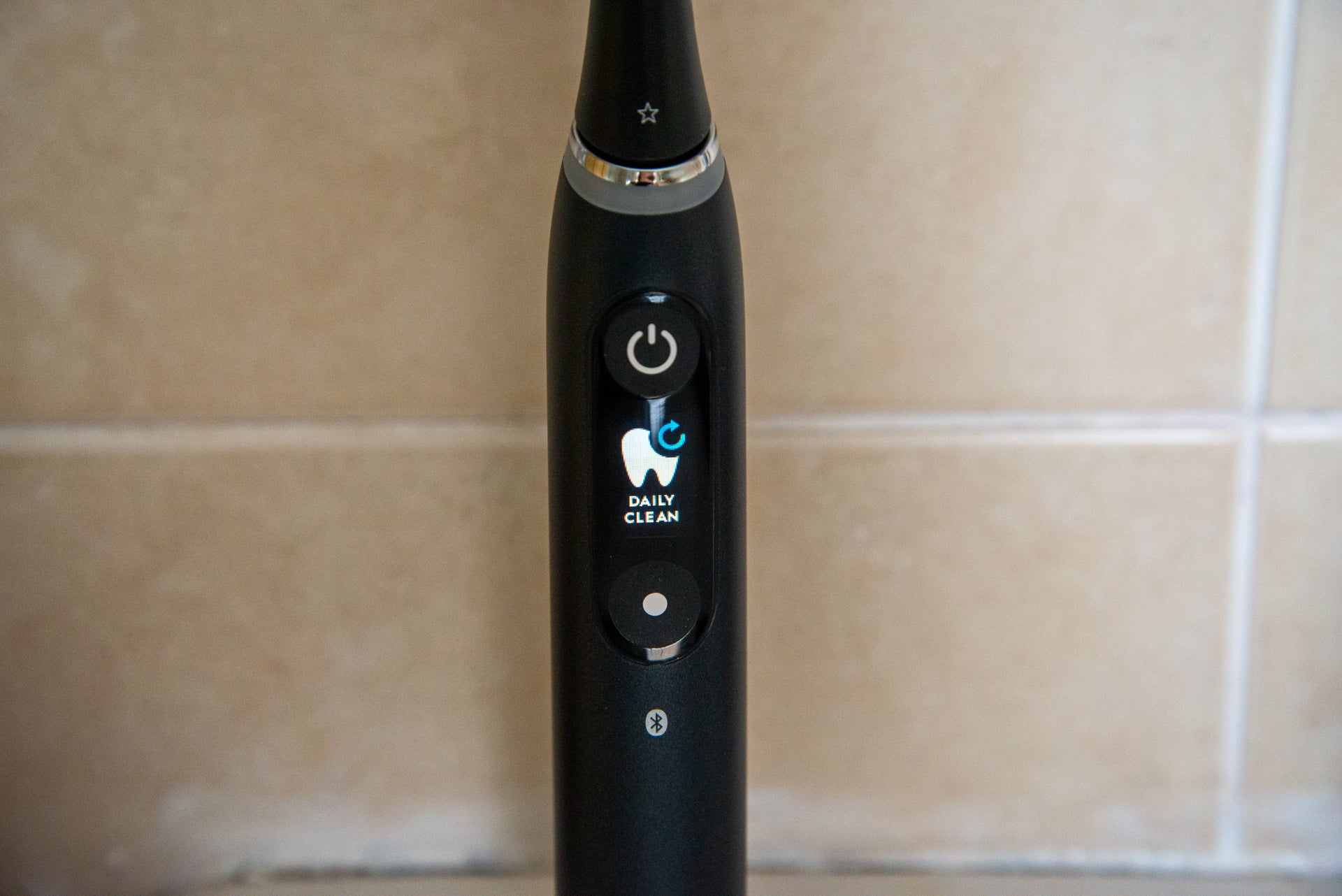 Modes include Daily care for regular cleaning; Sensitive, which reduces the power to give you a more gentle clean; Gum care for massaging your gums; Whitening for polishing your teeth; Intense clean that operates at a higher speed; Super sensitive for very gentle cleaning; and Tongue clean for cleaning your tongue.

Once you’ve selected a mode, you just brush as normal. Each mode has a timer, with the teeth modes also having quarterly timers that buzz the brush, letting you know it’s time to move teeth quadrant (you should brush top left, bottom left, top right and bottom right for at least 30 seconds each).

If you press too hard, then the status ring around the brush turns red, telling you that you should back off a little.

All modes are compatible with all toothbrush heads, although it’s recommended that you get a Gentle Care brush for the Tongue clean mode; you get the standard Ultimate Clean brush head in the box.

As with all electric toothbrushes, the iO Series 9 is charged via a wireless charger that plugs into a razer socket in your bathroom. Oral-B has redesigned its charger for this model, and it no longer has a nodule sticking upright. So, if you’ve got older Oral-B toothbrushes in your house, you’ll need to keep two different chargers around. 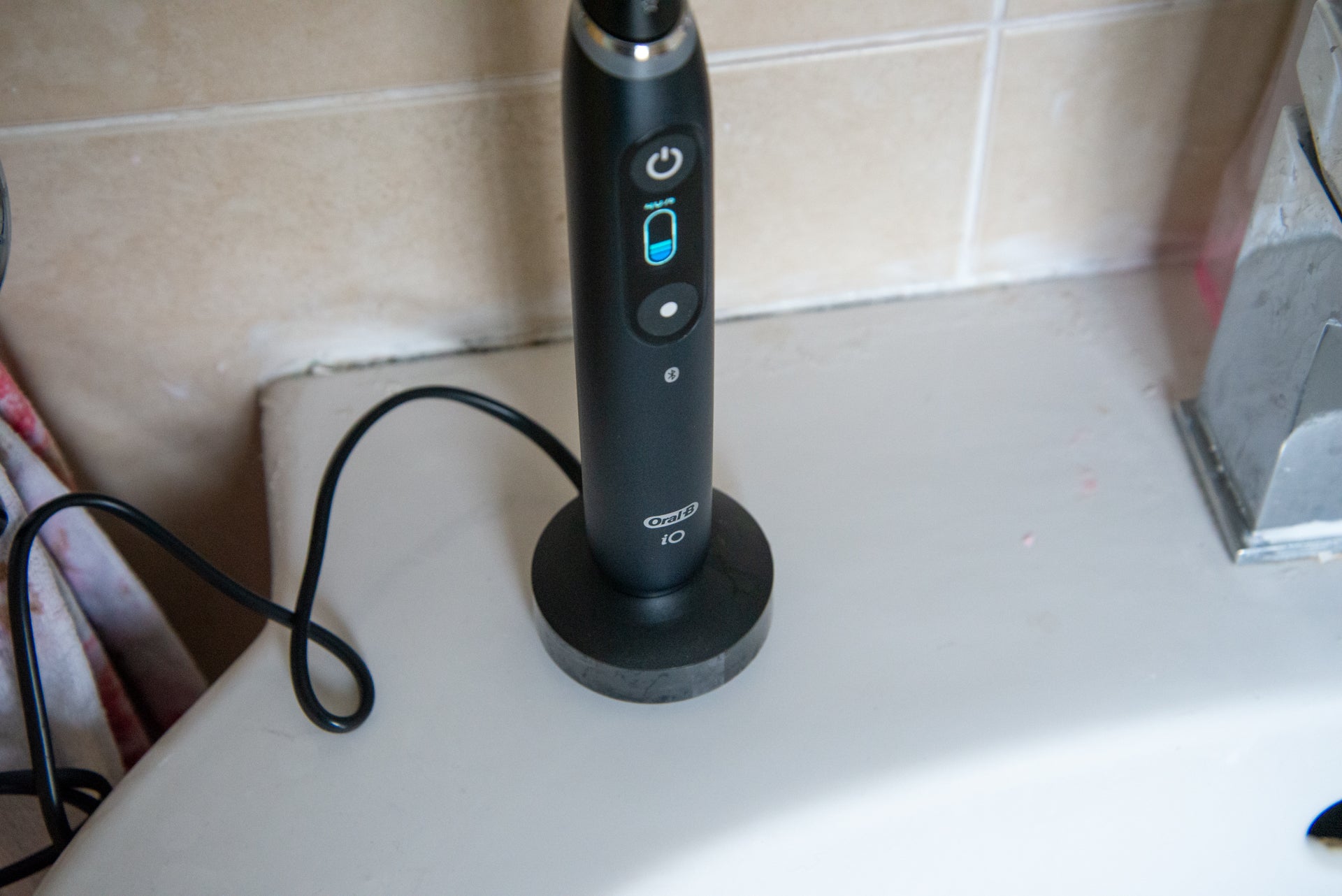 A charge takes around six hours, which is pretty quick going by other electric brushes, and should last around two weeks, depending on how often you brush your teeth and the modes that you use.

Oral-B is well-known for giving extras in the box, and the iO Series 9 is no different. This model ships with a charging travel case that can take the toothbrush and one brush head. And, you get a travel refill holder, that can take two additional brushes in it. 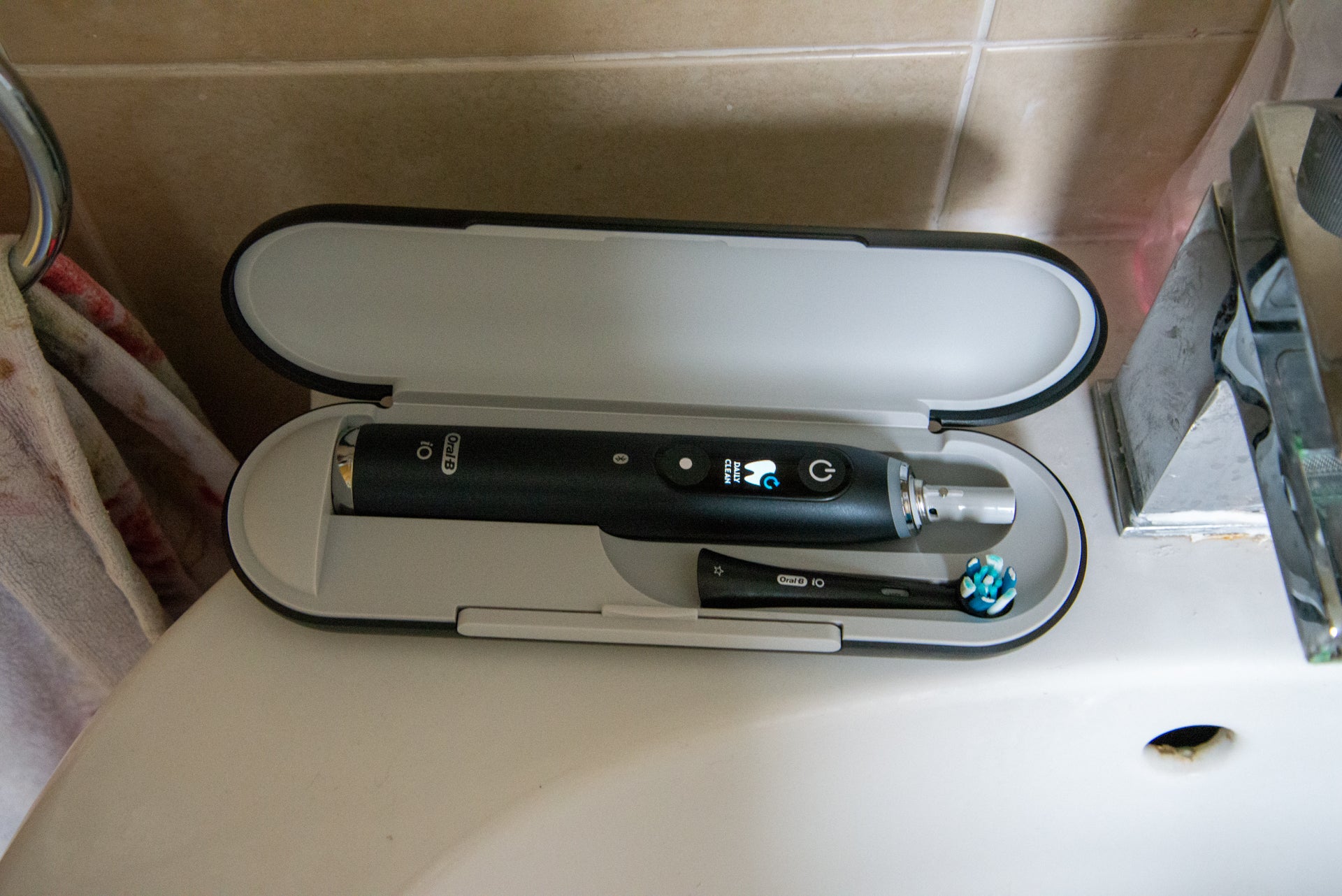 This toothbrush can be paired with the Oral-B app, which gives you a few extra features. First, you can use the app to change the colour of the LED ring, which is handy if you’ve got multiple people in the house with the same brush handle. You can also override the default two-minute timer, setting your own preferred brushing time. 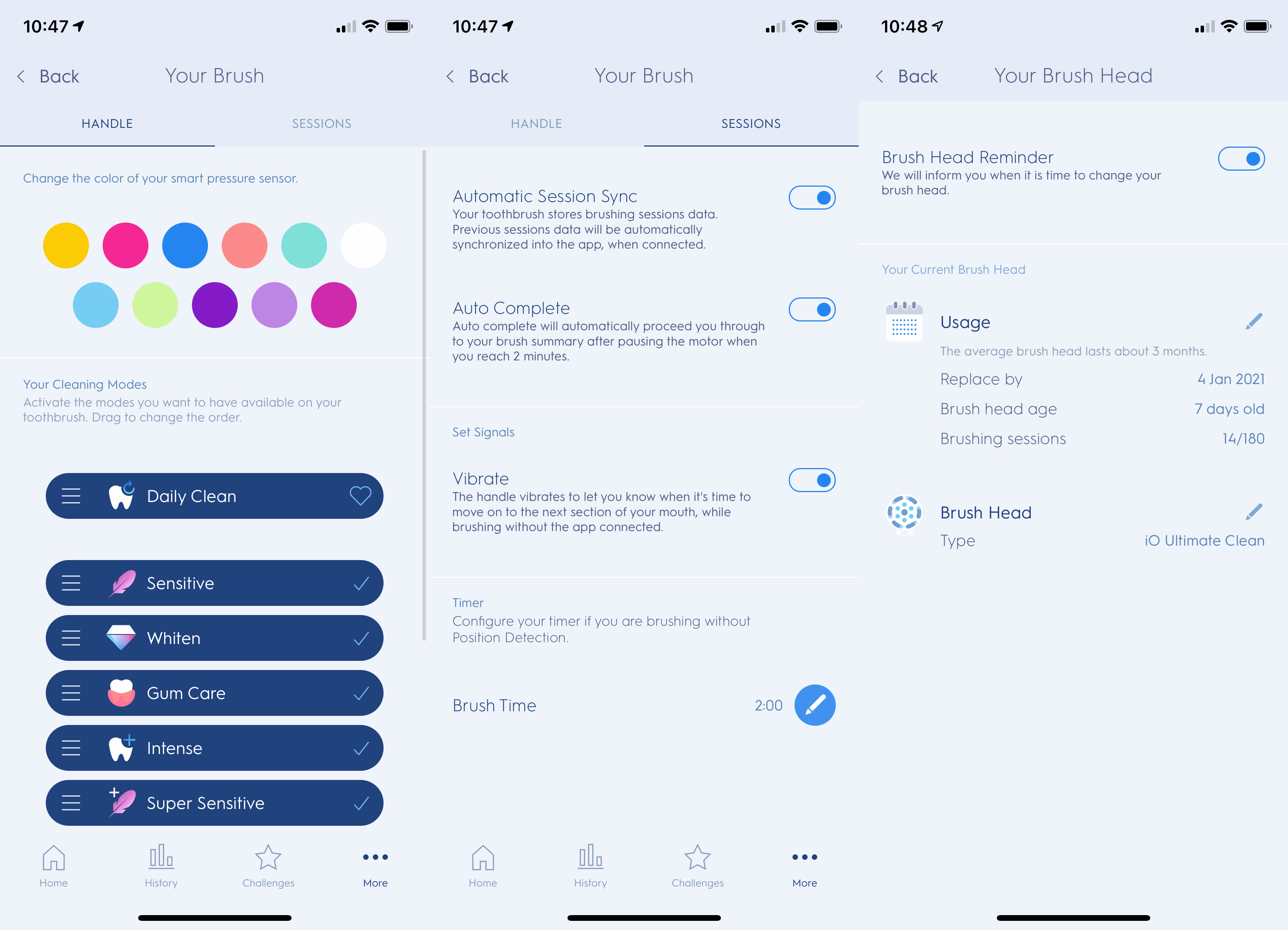 When you connect a new brush head, the toothbrush can detect what type it is and when it was connected, giving you an automatic reminder to change the brush head. It’s similar to the tech that Philips uses on its Sonicare brushes, although these have a reminder icon on the brush itself.

Oral-B has also built the app to help you brush your teeth better, too. Using tracking tech built into the brush, the app can detect where you’re brushing. It then highlights the area of your teeth that you’re covering, changing colour to give you stars when you’ve brushed an area well.

It sounds brilliant, but the tracking isn’t particularly good. I found that the app would quite often tell me that I’m brushing a different part of my mouth, particularly when it came to the back teeth. Ultimately, as with previous Oral-B smart toothbrushes, the app is something that didn’t come out very often after initial testing. 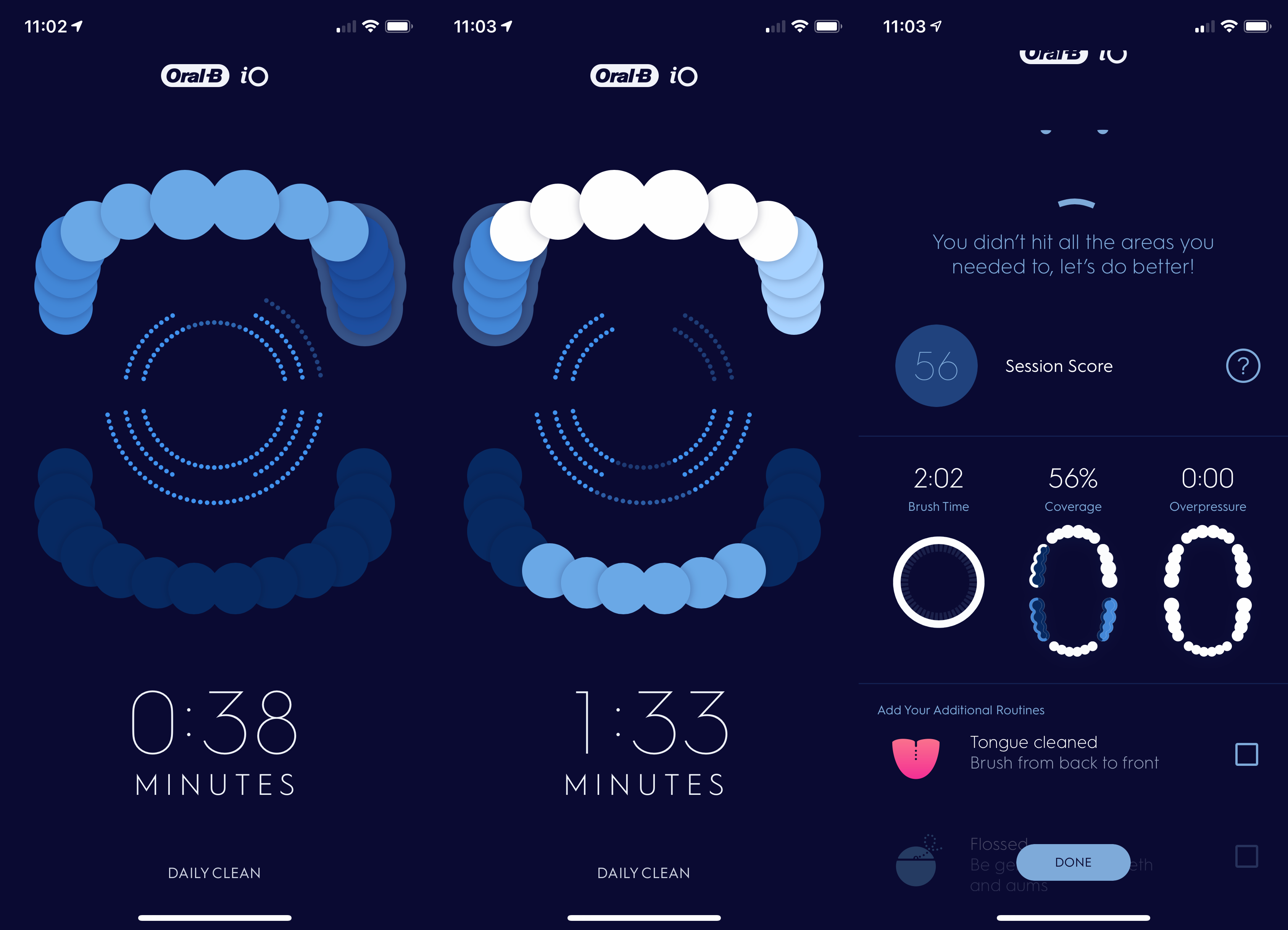 To test how good the toothbrush is, I got out my set of test teeth, and fitted them with spinach and beetroot debris. Cleaning using the standard clean programme, I found that the round Ultimate Clean brush head managed to make its way around the teeth easily. 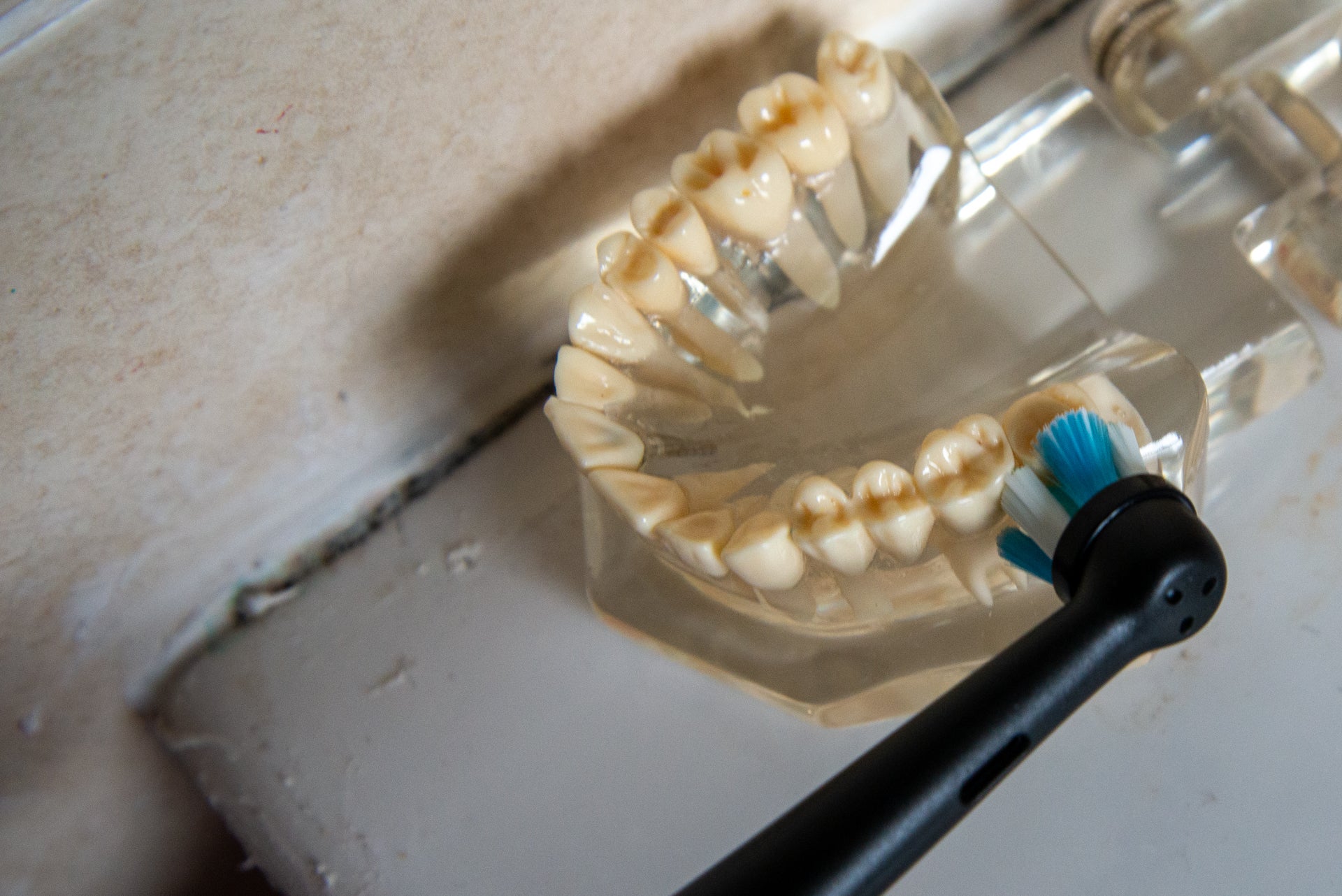 There’s plenty of power on offer, and the brush head teased out debris caught between teeth with no problems at all. At the end, all of the food and stains had gone, and I didn’t have to particularly focus my efforts on any one area. 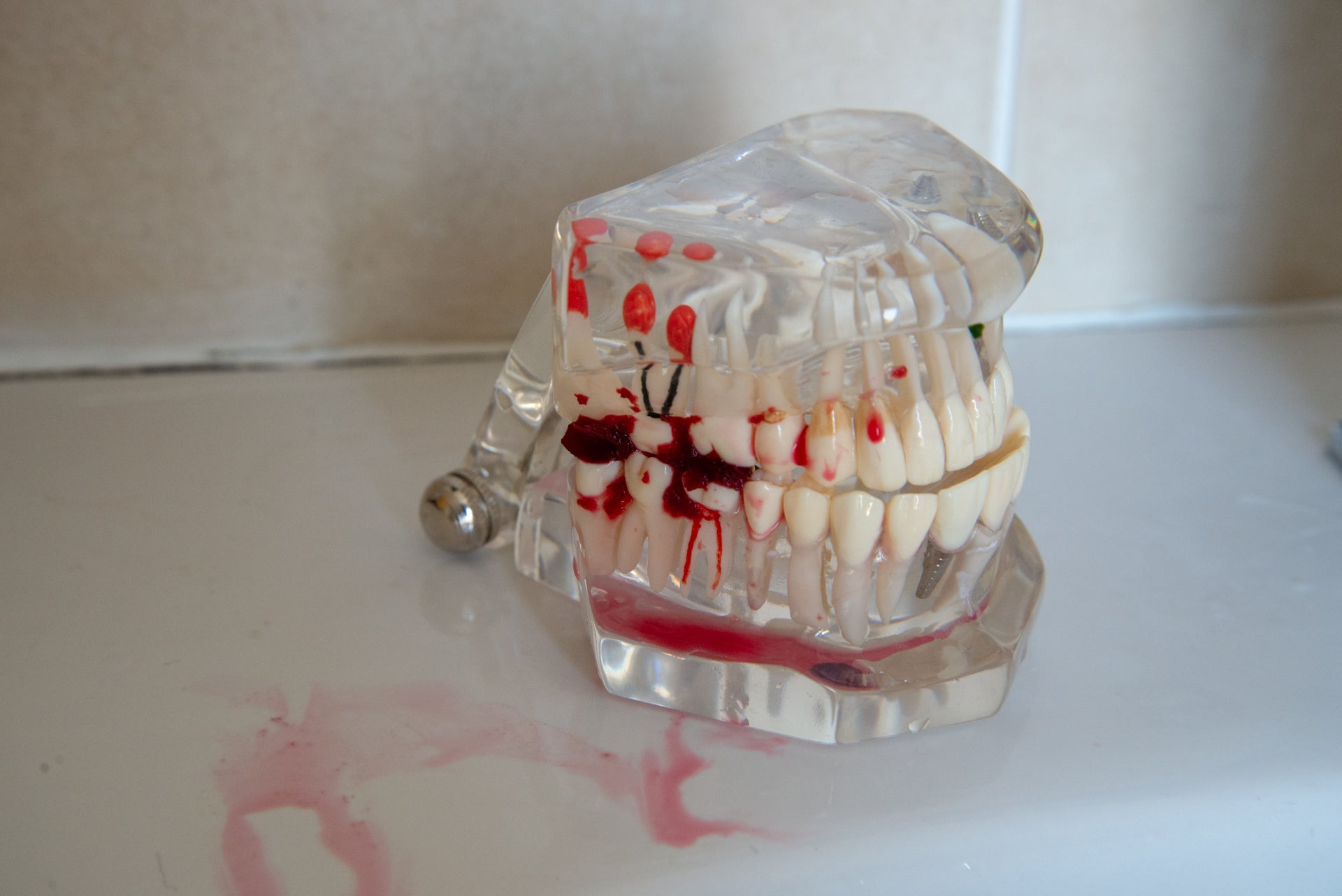 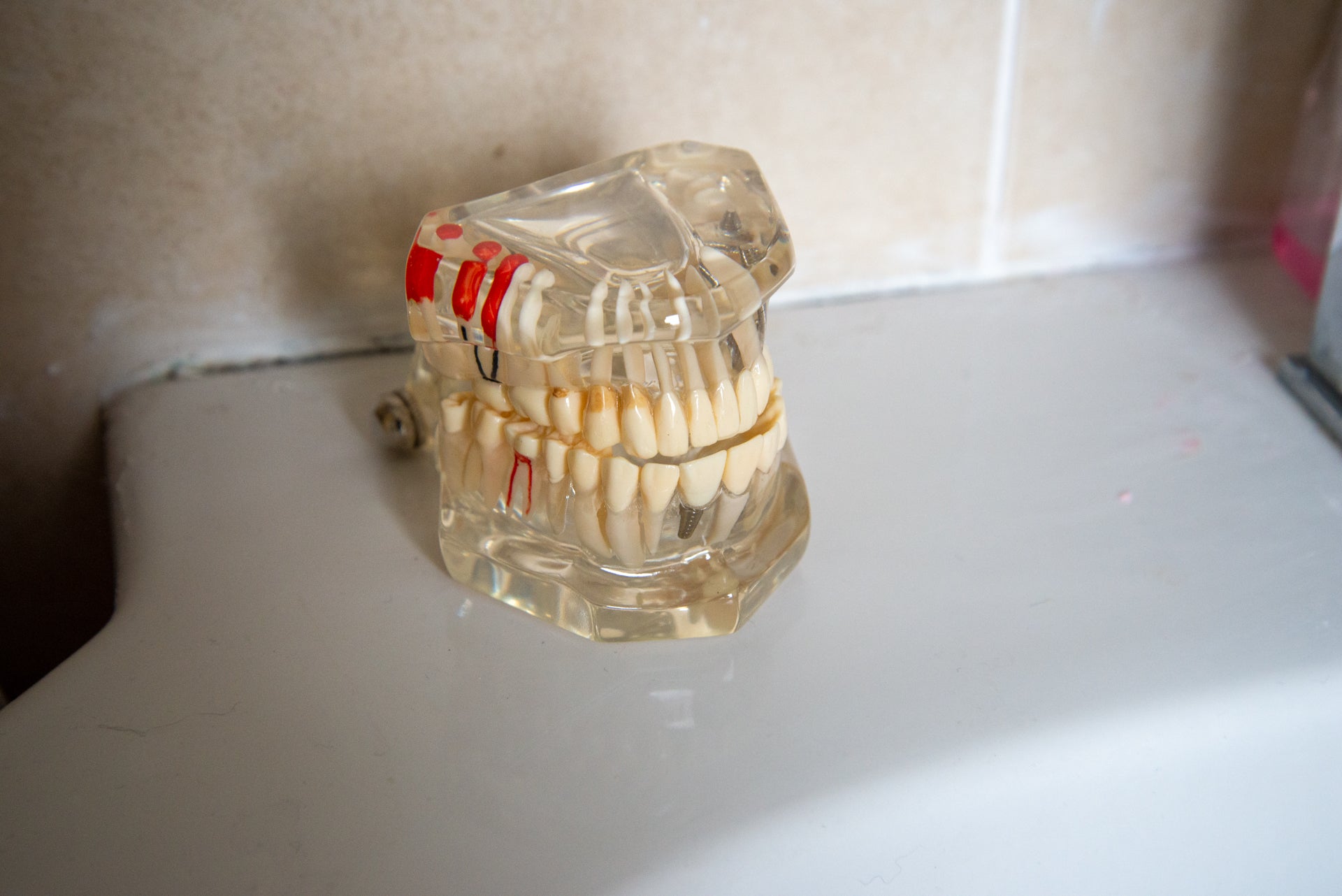 Moving to myself, I used the toothbrush for a couple of weeks. With previous Oral-B brushes, such as the excellent Oral-B Genius 9000, I found that I had to get used to the oscillating power, with some gum bleeding to start off with.

Thanks to the iO Series 9’s frictionless magnetic drive, things were easier this time around and it feels more like brushing with a sonic brush. However, look at the brush head as it moves, and you get more energy and dynamic movement than with sonic models. 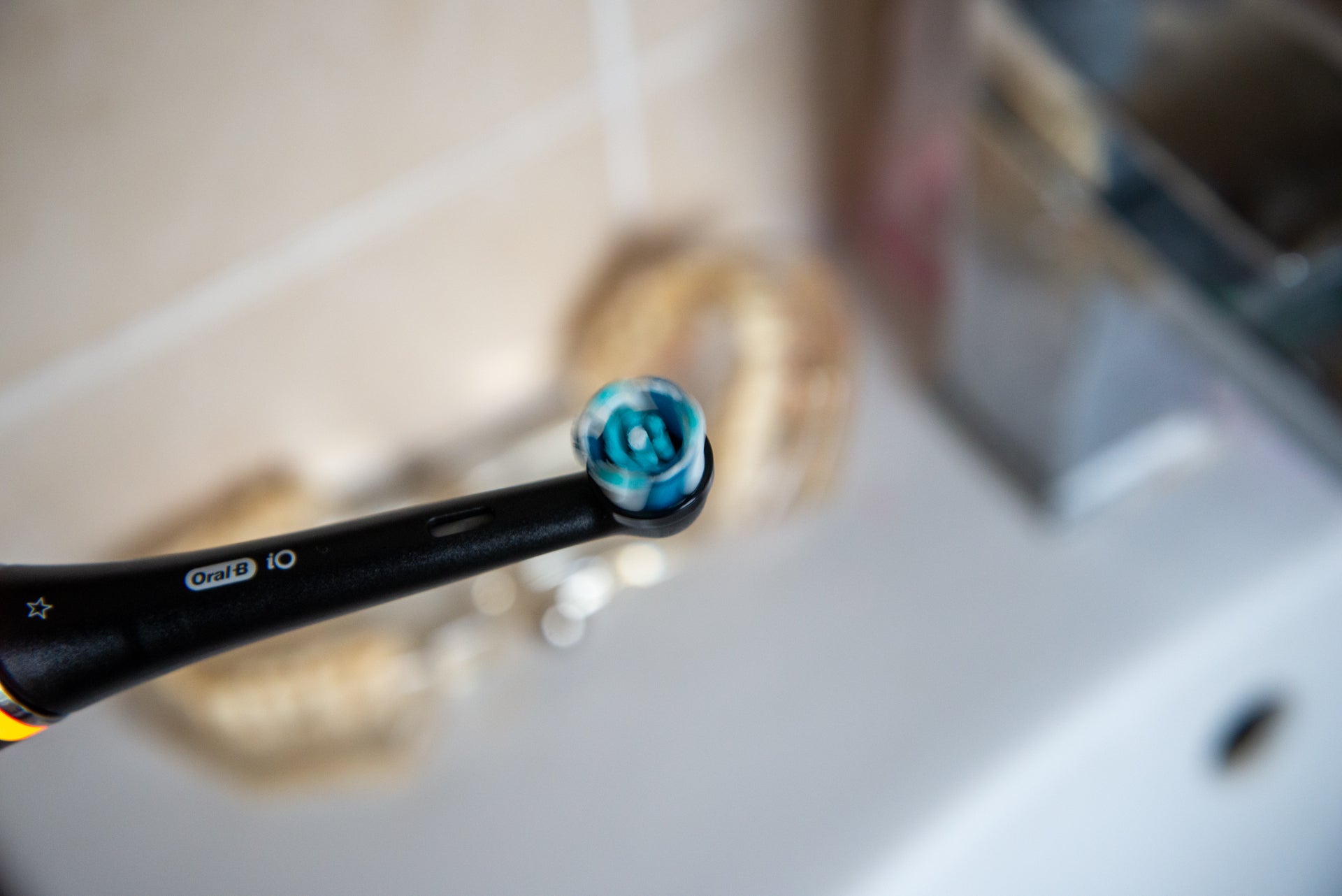 Thanks to the comfortable, round brush, rather than the longer, elongated brushes that you get with Philips models, the iO Series 9 is extremely comfortable to brush with. I soon got used to it, and felt that my teeth were fresh and well cleaned at the end.

There’s an added advantage of the magnetic drive: this brush is far quieter than previous Oral-B models. I measured the brush at a peak of 62.8dB; the Oral-B Genius 9000 peaked at 82.4dB!

Should you buy the Oral-B iO Series 9?

From a pure, objective point of view, the Oral-B iO Series 9 is the best electric toothbrush that I’ve tested. It’s powerful, quiet and easy to use, cleaning with an energy level that’s superior to other brushes that I’ve used. And its LCD screen is truely useful, making it far easier to switch between modes with confidence.

The price is a huge issue, with the brush retailing for £499.99, which easily makes it the most expensive electric toothbrush that I’ve reviewed. If you can afford it, or can get one on deal, then it’s money well spent, with the Oral-B iO Series 9 giving a superior and effortless cleaning experience.

At full price, most people will probably be better off with the older Genius 9000, which is far cheaper and cleans brilliantly, although it does take some getting used to.