What is the Optoma UHD65?

The Optoma UHD65 is the first single-chip 4K DLP projector  unequivocally aimed at the home cinema enthusiast. Sporting an all-black chassis, with stylish metallic accent, it’s designed to vanish in a dark cinema room. It’s also compact enough to either ceiling mount or pop into a shelving system.

It sits just above Optoma’s UHD60 4K model, which is a tad brighter but doesn’t offer broadcast-quality colour. It should be considered a cheap-ish alternative to Sony’s SXRD native UHD projector range and the e-shift faux-4K offerings of JVC and Epson. It’s also a direct competitor to the media-room style Acer V7850. 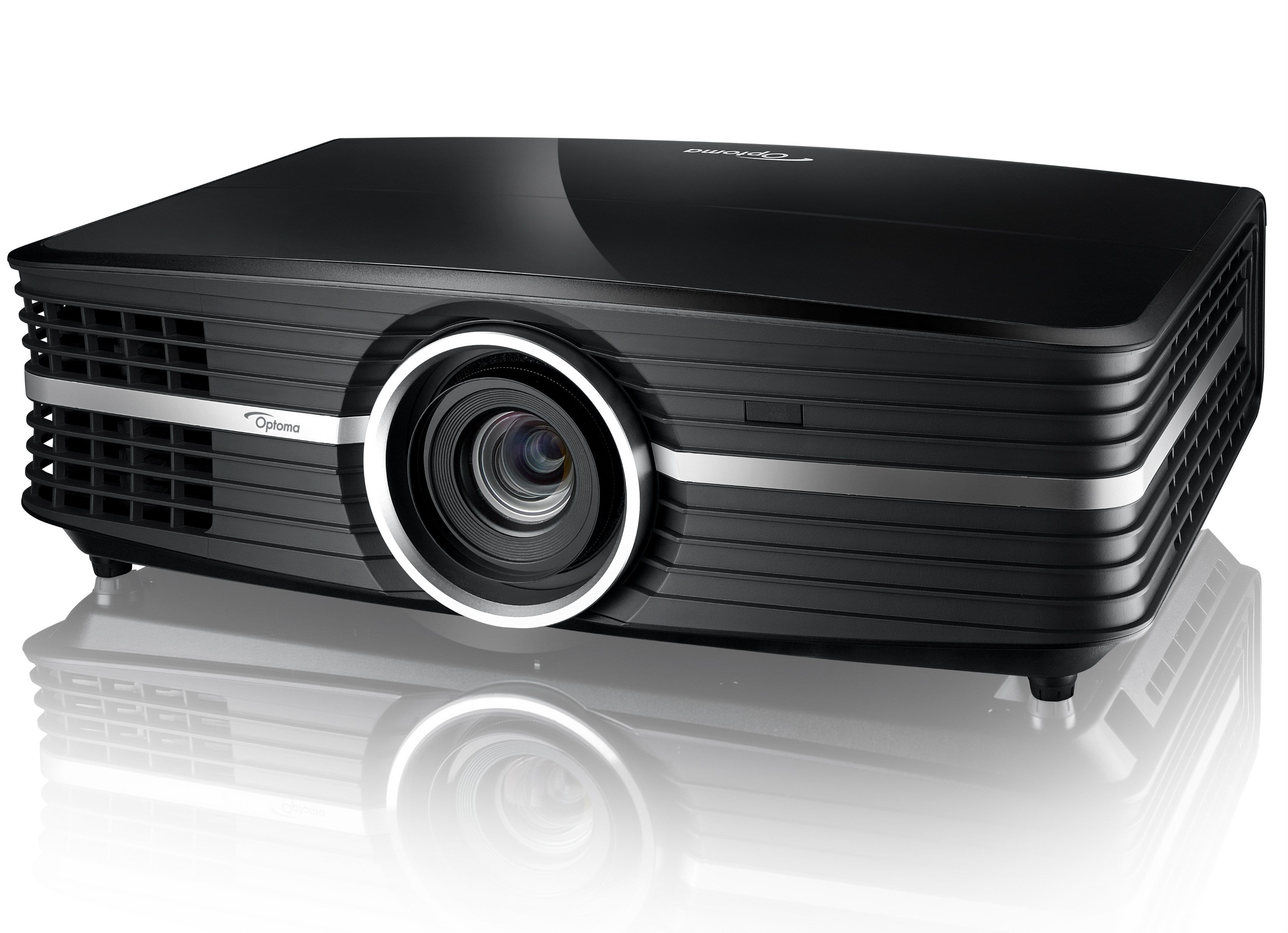 The projector vents warm air to the front, with connectivity to the rear. There are two HDMIs, only one of which is 4K HDCP 2.2 capable, and there’s also a VGA PC input. USB is present, but for powering the likes of Amazon Fire TV and Roku TV sticks, rather than media playback. Both digital audio and analogue stereo outputs are provided.

Other connections include an RJ-45 for control purposes, and a 12v trigger for syncing the projector with an electric projection screen. It comes with a brightly backlit remote control.

The UHD65 is a relatively straightforward projector to set up. Your room will need to accommodate a throw of 3.5 metres if you want to cast an image over 70 inches. Focus and the 1.6x zoom require manual adjustment, and there’s generous lens shifting available. However, you’ll need to remove the top half of the projector lid to get to the Lens Shift wheel, which seems like excessive surgery.

The UI is an unfussy textbox with tabs for Display, Audio, Setup, Network and Info. Here you’ll find a Wall Colour compensation filter, which is useful if you intend to project onto a non-white wall rather than a dedicated screen.

At the heart of the projector is Texas Instruments XPR (eXpanded Pixel Resolution) 0.67-inch DMD device, which uses hyper-fast switching to create a 4K (8-million pixel) image from 4.15 million mirrors. Debate rages as to whether this constitutes native 4K. I think it is…kinda.

It’s partnered here with an RGBRGB colour wheel. This is a significant upgrade on the stablemate UHD60, which has an RGBYCMW colour wheel. There’s a choice of Eco or Bright lamp modes; Eco generates the lowest level of fan noise (25dB).

There’s also a built-in 4W speaker, which works fine if you want rudimentary audio for a sports event or quick gaming session. Of course, it will benefit more from being part of a proper home entertainment system. 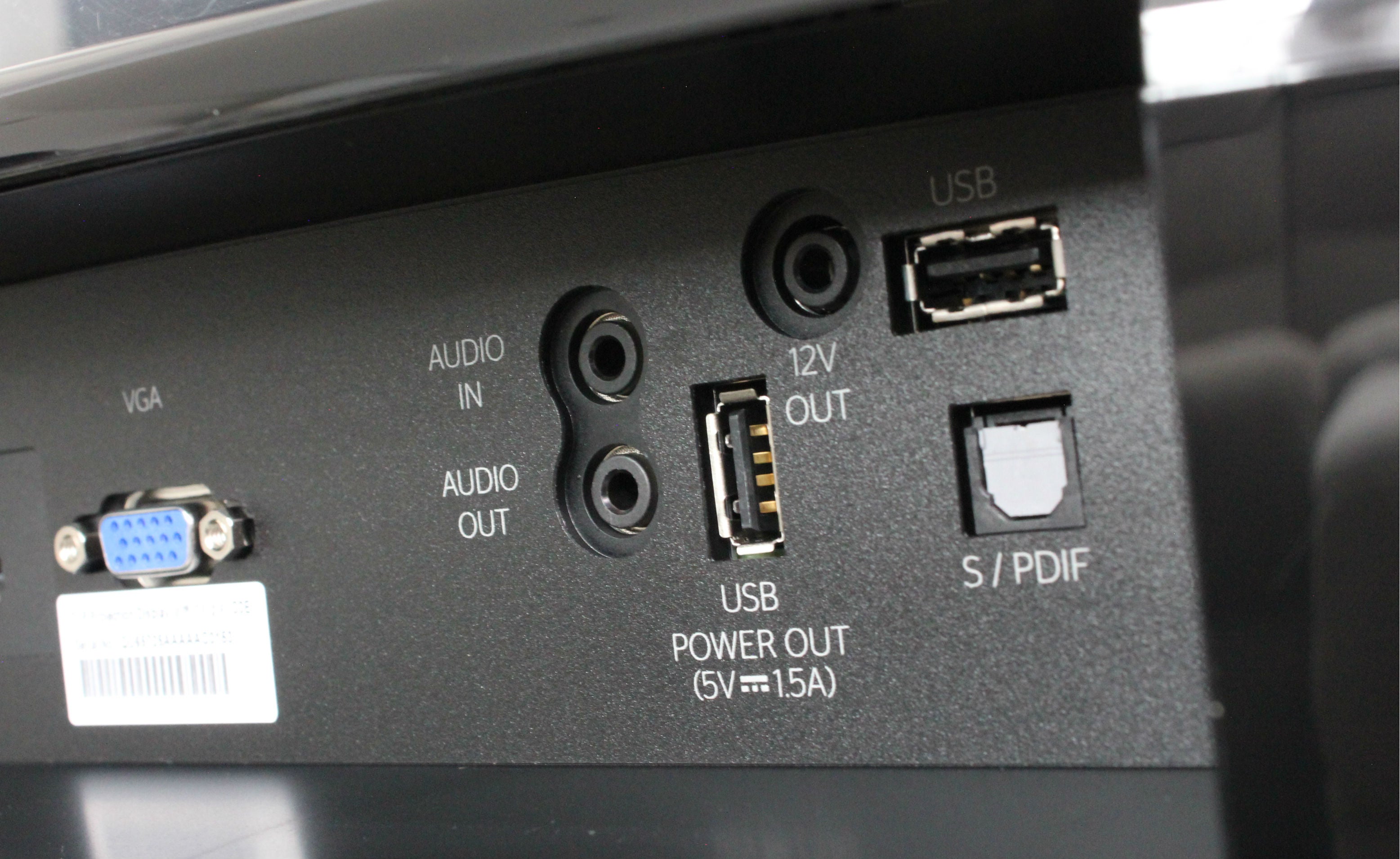 Picture detail is unquestionably high. The projector looks particularly fine with the 10-bit 2160p output from a Sky Q set-top box. Star Trek Beyond is hugely engaging in terms of fine picture detail and colour vibrancy; Warcraft shows a mesmerising amount of texture and fine detail.

UHD Blu-ray is also a decent source – although, perhaps surprisingly, it isn’t significantly better than a 4K set-top box or Netflix 4K. This DLP projector doesn’t support wide colour as used on UHD Blu-rays, but instead down-converts it to the standard currently embraced by TV and 1080p Blu-rays.

One weak point is the projector’s limited motion resolution. This isn’t an issue with movies, although if you like icy interpolation on sports programmes then you might miss it.

Viewing presets include Cinema, Vivid, Game, Reference and Bright, as well as ISF Day and Night options for professional calibration. HDR viewing modes comprise Bright, Standard, Film and Detail. There’s an SDR to HDR converter, but this overcooks colours to unwatchable levels and should be avoided. 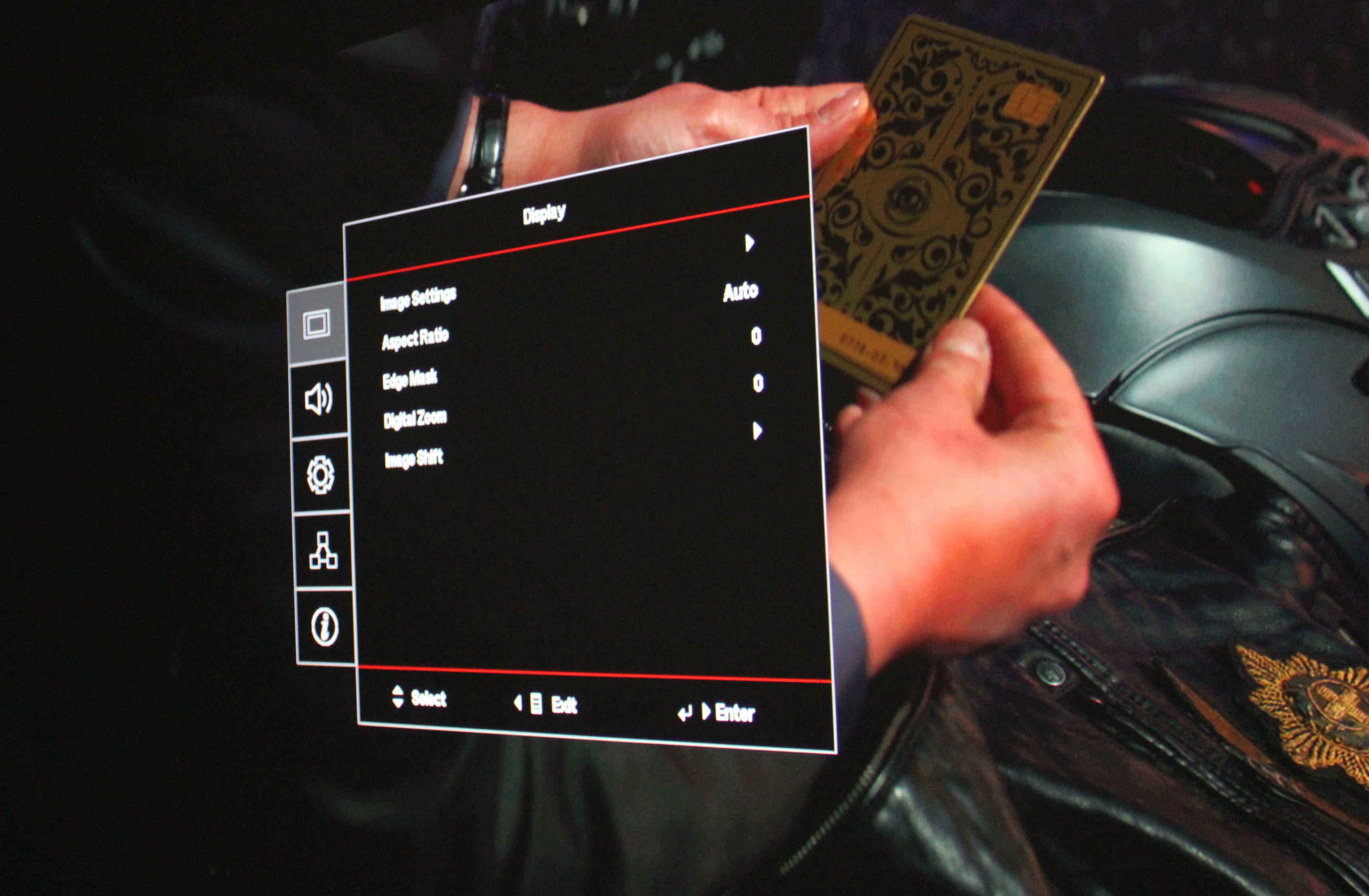 Image refinements include Ultra Detail and Dynamic Black modes. The latter boosts peak luminance, but increases fan noise. The former adds an image processing lift. It’s available in three strengths, but I wouldn’t recommend any of them, since it adds an overt processing artefact seen in areas of ultra-fine detail. Besides, the projector makes a good fist at resolving a 4K test pattern without it.

The projector may be HDR compatible, but is unable to truly exploit HDR content as effectively as an HDR flatscreen. While televisions are able to illuminate specific areas of the screen, a projector lamp doesn’t come close to emulating that.

Instead, it tone maps in an attempt to reproduce HDR highlights, meaning you can end up with an overly dull image. With content mastered at 1000 cd/m2 (aka nits), the projector can only tone map to approximately 800 cd/m2. Beyond that it washes out.

Ultimately, I preferred the UHD65 with SDR 4K material, as well as HD Blu-ray content upscaled to 2160p by a UHD Blu-ray player. This gives a higher average picture level.

Occasionally, though, the UHD65 strikes an acceptable balance, and the results are thrilling. The darkly lit catacomb sequence from John Wick 2 on UHD Blu-ray, for example, retains shadow detail despite those bright up-lighting lamps.

Brightness is rated at 2200 ANSI lumens, with contrast said to be 1,200,000:1. While the projector can probably be used in a room with some ambient light, it’s best viewed in a fully dark room.

Inevitably, there’s a limitation to the projector’s black level. Letterbox bars on movies remain stubbornly dark grey, regardless of viewing modes, gamma variants or changes in brightness and contrast. This is a trait common to lamp-based projectors. For deeper blacks, you’ll need a projector with a laser light engine (which Optoma has in development, but don’t tell them I told you).

The rainbow effect, a characteristic of single-chip DLP projectors, was largely absent. Only very occasionally was I aware of the flashing colour wheel. Why should I buy the Optoma UHD65?

It’s often difficult to appreciate the resolution boost offered by 4K UHD on a relatively small UHD TV. However, supersize your sources to 100 inches plus, and the extra detail and depth becomes wonderfully self-evident. This Optoma does a marvellous cinematic job, particularly with the likes of Sky Q and streaming 4K dongles, as well as regular Blu-ray. Plus, colour fidelity is lush. It’s also compact and respectfully quiet in operation.

Overall, the Optoma UHD65 is a cracking 4K projector, albeit not without flaws. Our advice is to take its HDR compatibility with a pinch of salt, and bathe in the luxurious detail of its big-screen 2160p images.