A few months back the Optoma boys set the projection market alight with the HD73: a DLP projector that gave you Texas Instruments’ then bleeding-edge DarkChip 3 chipset technology at a price hundreds of pounds lower than anyone else could manage.


And now they’re up to their old tricks again with the HD80: a DLP projector with a full HD resolution that costs just two grand – way less than any of its full HD DLP competitors. But is it really the dream solution it first appears? 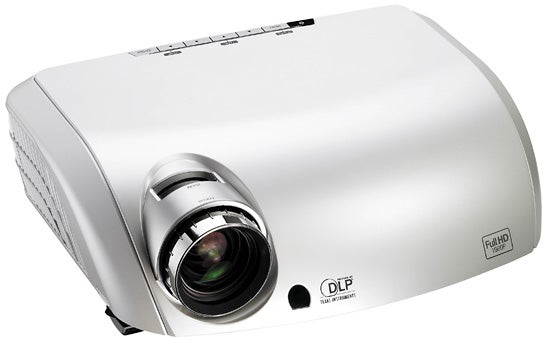 A quick glance at its exterior keeps our hopes alive, as it’s really quite a pretty thing in its semi-glossy white exterior and extravagant curves. However, we’d recommend that you keep your attentions to a discreet distance, for if you get up too close you can’t help but notice that the build quality seems a little flimsy – especially in the all-important area of the lens barrel and zoom/focus ring, which all appear extremely plasticky. Hmm.


There’s absolutely nothing not to like about the HD80’s connections, though. For starters they include no less than three digital video inputs: two HDMIs for HD video sources, and a DVI that can be used for digital PC connection. Plus there’s the component video jack now expected as standard on any HD device, and a couple of extras designed to catch the eye of the custom installation market: a 12V trigger output for automatically firing up a motorised screen, and an RS 232 port for system control.

Closer inspection of the HDMIs reveals that they’re built to the new v1.3 standard, enabling compatibility with the much-vaunted but never-seen Deep Colour standard, for delivering enhanced picture quality from suitably encoded HD discs. We actually have our doubts that any Deep Colour film titles will ever appear commercially, but hey; if they do, then the HD80 will be more than happy to show them.


Two further HD-friendly tricks are a pixel-for-pixel mode that removes overscanning when showing 1080-line sources; and support for the hot new 1080p/24fps video standard used to master the majority of movies to Blu-ray and HD DVD discs.


The ability to accept video in this format, so the argument goes, means that images can travel from disc to screen with less picture-spoiling disturbance from the internal processors of either the Blu-ray/HD DVD player or the projector.

Top of the HD80’s other specifications is its contrast ratio, which, remarkably for such an affordable projector, is claimed to be 10,000:1. However, investigate this outlandish figure a little deeper, and you find that it comes with strings attached in the shape of a manual iris adjustment.


This lets you select how much brightness the projector’s iris cuts out of the image, in a bid to boost black level response. But obviously this means – in a situation more commonly found with LCD projectors – you can only get the maximum contrast range if you’re prepared to make potentially dramatic sacrifices to the image’s brightness. 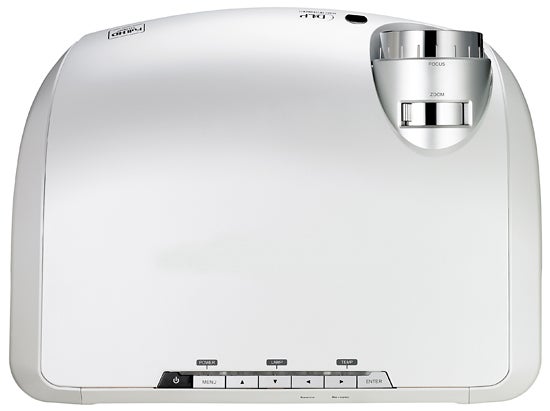 Given that the HD80 sports an adjustable iris, it’s perhaps surprising that there’s no ‘automatic’ iris adjustment setting, whereby the projector might calculate for itself when and by how much it needs to close the iris to deliver the right sort of black level response. This automated approach is certainly favoured by many projectors that use rival LCD technology.


But then perhaps adding the necessary contrast analysis routines to the HD80 would have pushed its eye-catching price higher. And also, of course, not having an automatic adjustment does at least mean you won’t have to worry about seeing overt brightness ‘jumps’ when an automatic iris fails to make its adjustments subtly enough.

Considering how affordable it is, the HD80 isn’t short of useful adjustments in its onscreen menus. Highlights include gamma adjustments, degamma presets, noise reduction routines, an edge enhancer, Optoma’s True Vivid processing for producing richer colour saturations and, bizarrely, an ‘AI’ system that can automatically adjust the projector’s picture settings in response to the amount of light in your room. Why is this bizarre? Because frankly anyone who spends £2k on a projector and then watches it in anything less than a totally darkened room clearly has a screw loose. 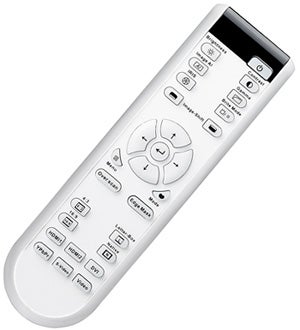 Aimed as it is at a relatively ‘entry-level’ consumer, it’s a relief to find the HD80 an absolute doddle to get up and running. The remote control is unusually well thought out and comfortable; the onscreen menus are well presented and terrifically organised; and the projector carries both vertical image shifting and vertical keystone adjustment to help you get the picture perfectly aligned on your screen.

There are a couple of limitations you ought to be aware of, though. First of all, the level of optical zoom the HD80 provides is a bit limited, meaning it might not fit comfortably in your room. We suggest you check your preferred screen size/throw distance measurements with your dealer to be sure the HD80 is compatible with them before parting with your money. Second, tilting the projector evenly to angle a picture up – or down if you’re ceiling mounting it – is made trickier than it should be by some annoyingly fiddly height-adjustment legs.


Limitations aside, it is with bated breath that we unleash the HD80 on a variety of our favourite HD things – and for the most part, it doesn’t let us down. 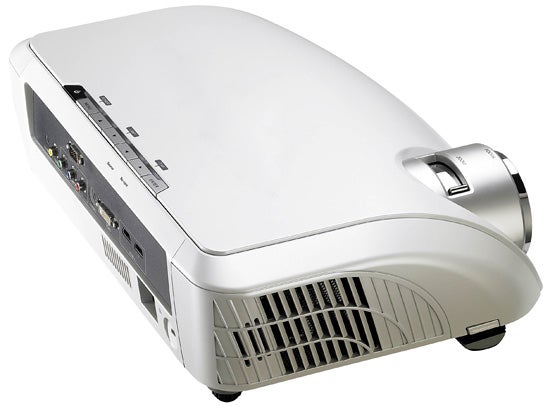 HD images look exceptionally free of scaling ‘smudges’, for instance, provided you use the 1:1 pixel mode. And the full HD resolution also makes its presence felt in the subtle nuances of the projector’s colour reproduction, as blends look smooth and natural rather than distractingly striped as they can on lesser DLP projectors.


The HD80 produces a startlingly good black-level response, too, balancing subtle shadow detailing with profoundly black areas of darkness in the night-time Shanghai scenes in ”Mission: Impossible III” (Blu-ray), without completely losing them to the sort of grey wash that characterises projectors with contrast problems.

Colours also impress with their mostly vivid saturations, especially if you activate the True Vivid function. And we were relieved to find that despite its relatively cheap price, the HD80’s pictures weren’t regularly troubled by those common DLP problems of the Rainbow Effect and fizzing noise over faces as they pass across the screen.


While these strengths mean the HD80 does just enough to warrant its money, there’s no doubt it falls short of the best of its more expensive rivals in a number of ways.


First and worst, its HD pictures just don’t look quite as uncompromisingly sharp and detailed as they do on most full HD projectors out there. Next, colours might look vivid but they don’t always look entirely natural in tone. Third, the picture tends to look slightly short of brightness whenever you’ve got the iris set to a level that best suits black-level response. And last but not least, although the picture is pleasingly free of scaling noise, general dot crawl interference is more rife than we’re entirely comfortable with.


By the standards of a typical £2,000 DLP projector, there’s plenty to like about the HD80. By the standards of most full HD projectors, however, a gentle softness to HD presentations means that it doesn’t live up to its full HD billing quite as satisfyingly as we’d really like it to.